It’s designed for creative professionals who have $1,750 to spare.

HP claims to have made the "world's most powerful detachable." The company is unveiling its ZBook X2 convertible at the Adobe Max conference today, which is appropriate since this device is designed for people who use Adobe's pro software suite. Specifically, people who use apps like Photoshop, Lightroom and Illustrator and need a capable tablet that can keep up with demanding graphics editing on the go. I enjoyed doodling on the Zbook X2 during a recent demo, but I'm not sure its $1,749 asking price is justified. To be fair, of course, I didn't use it as it was intended and I'm not the target audience.

What makes the ZBook X2 ideal for designers and illustrators is its advanced 14-inch 4K display. HP chemically treated the screen to give it a grippier, matte texture that felt smoother during my testing than regular glossy touchscreens. The anti-glare display is also color calibrated for accuracy and can render 100 percent of the Adobe RGB color spectrum. All of this makes the ZBook's screen a brilliant canvas. I not only enjoyed seeing individual eyelashes of a man up close, but I also appreciated how smooth it felt to pinch and zoom in on images with the tablet.

The texturized screen also makes drawing a pleasant experience. HP includes a stylus with the ZBook X2 that it claims is its "most accurate and expressive" pen yet. The company teamed up with Wacom to make the digitizer, which can recognize 4,096 levels of pressure, as well as understand the angle at which you're tilting it. My favorite thing about the pen is its dedicated eraser button at the top, which actually acts like a real eraser instead of simply undoing your last stroke when you tap on the screen. It was so realistic that I almost tried to brush away imaginary eraser dirt after using it to remove stripes on a pink background. 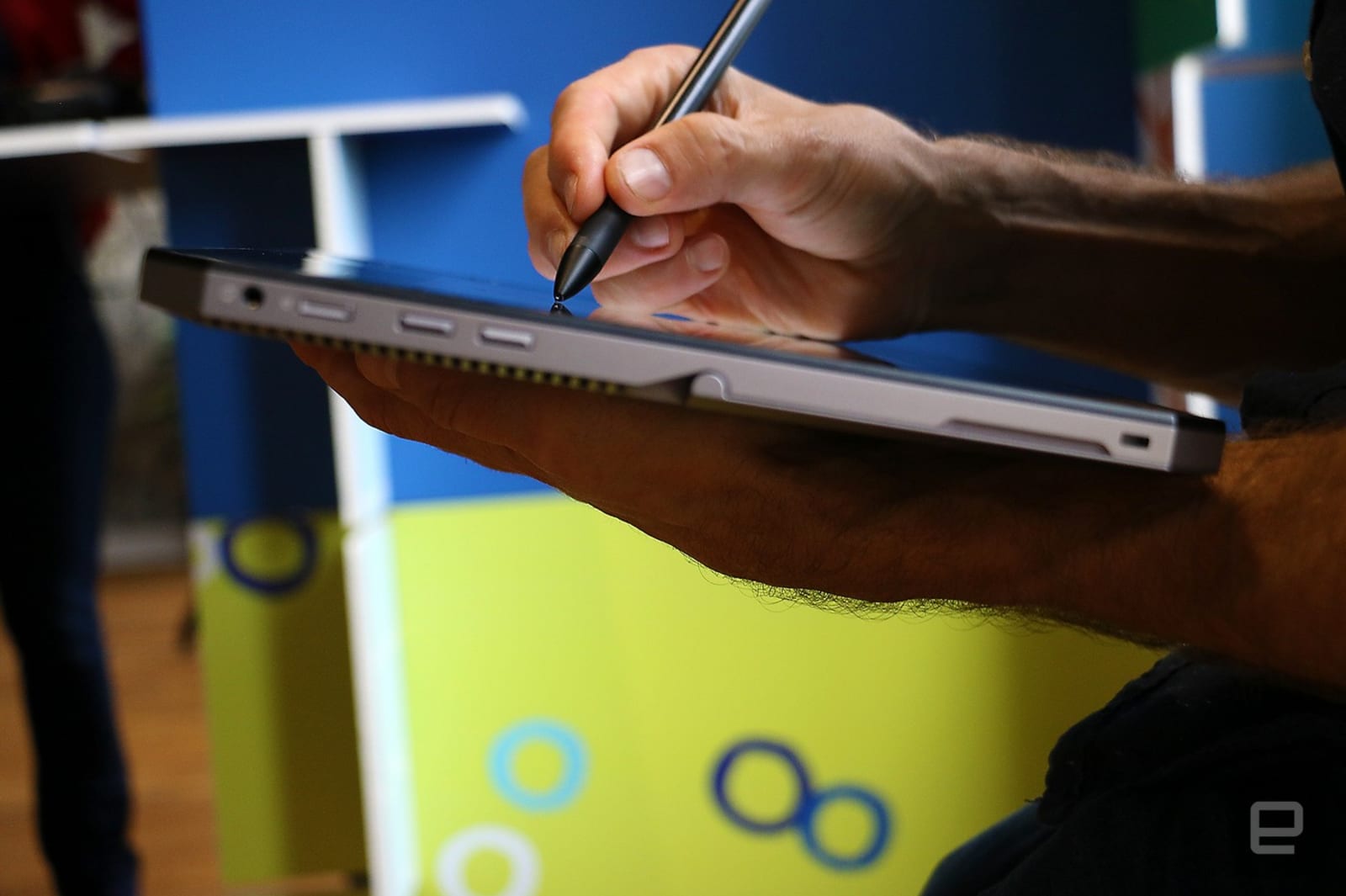 Since HP's pen uses magnetic (EMR) technology instead of Bluetooth, it doesn't need to be recharged; it draws power when it interacts with the screen. I sketched a cute cartoon of a girl under the word "Engadget" with the stylus and found it smoother and better at detecting pressure changes than others I've tested (mostly lower end offerings that accompany the Note tablets or phones).

I also appreciate that HP includes a full-size keyboard with the ZBook X2, although at this price I'd be appalled if it didn't. The keyboard snaps on securely via a magnetic connection, but it takes the tablet a few seconds to sync, so I have to wait before typing. The keys are evenly spaced, with generous travel that makes typing comfortable. The touchpad was similarly responsive -- it quickly recognized my two-finger scroll and zoom gestures. HP also offers a row of shortcut keys for functions like "Home," "End," "Page Up" and "Page Down" here, which make multitasking easier. 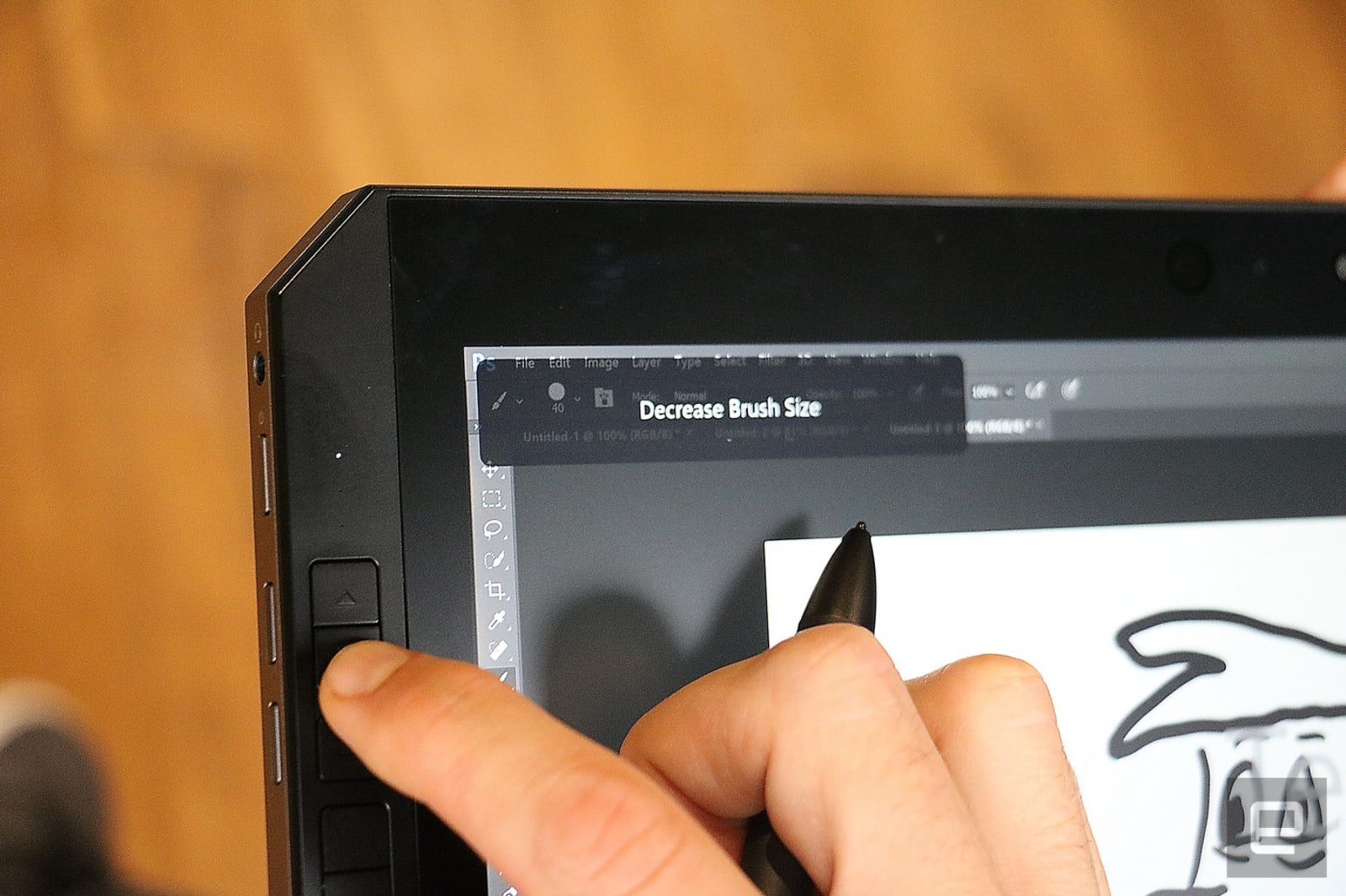 Speaking of shortcuts, the ZBook X2 features vertical rows of buttons on either side of the screen. Each column has up and down keys that can be programmed to tweak settings like brush size and opacity in apps like Adobe Photoshop. By default, they've been tailored to what HP and Adobe understand are the most popular tools in Photoshop and Lightroom. You can customize these to control system settings like volume or display brightness, too. During my testing, it was convenient to change the brush size just by pushing the up or down button mid-drawing instead of having to drag a slider in the app's setting bar.

The ZBook X2 looks and feels as beefy as it purports to be. Its aluminum-and-magnesium body is significantly heavier than most tablets, and its 3.6-pound weight is greater than most laptops its size. If you count the ZBook X2's keyboard, the entire device weighs 4.6 pounds, which is even heavier than the 15-inch MacBook Pro. That heft was manageable when I propped the ZBook X2 up on a table (with its built-in kickstand) but quickly became tiring when I sat with it cradled in one arm and drew with the other hand. You most likely won't use it in this position as often, though. 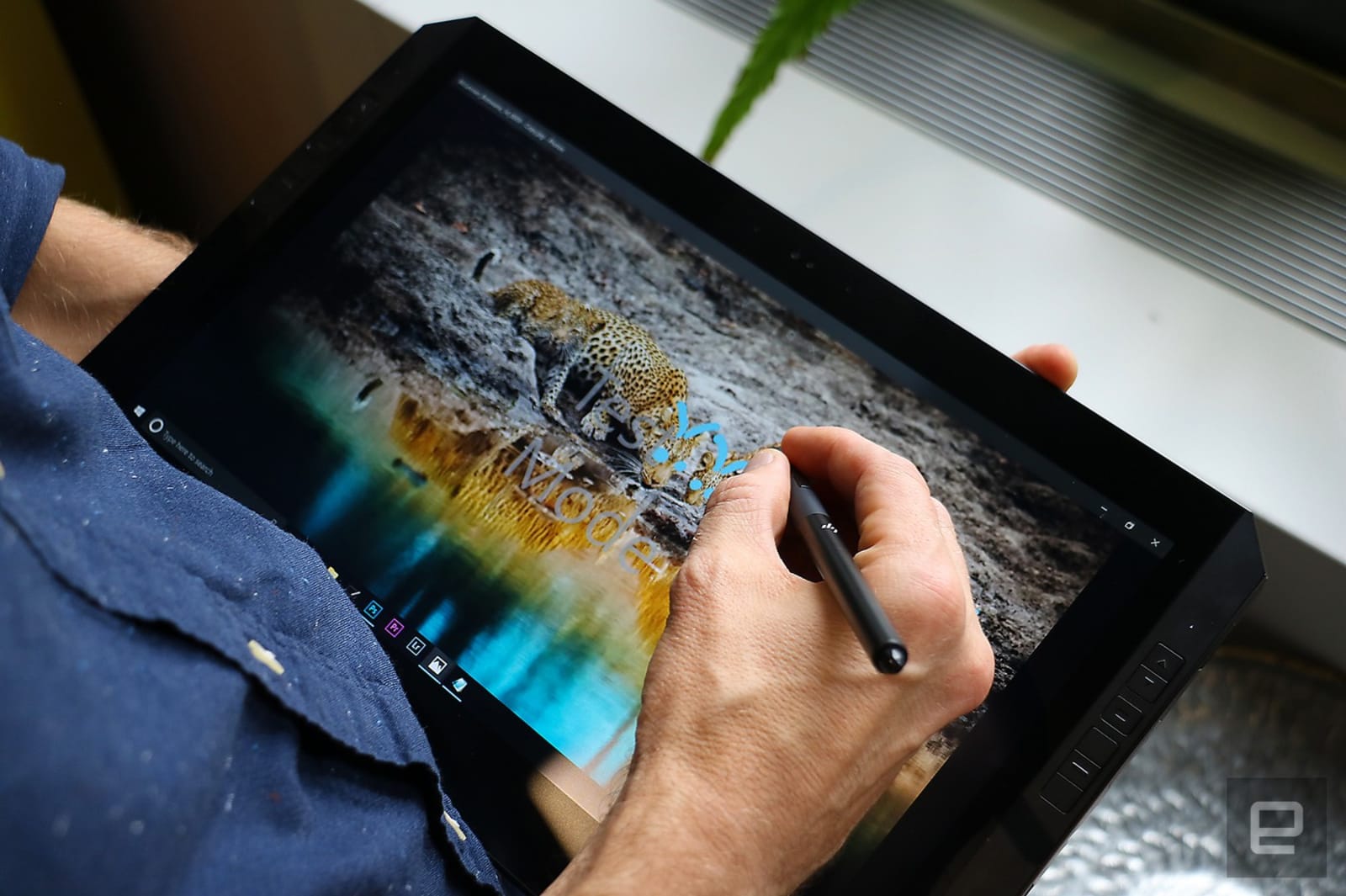 The tablet's cut-off corners and the vents on its side add a rugged aesthetic. Under the vents lie the device's dual-fan cooling system. This helps prevent overheating of the X2's powerful processors: a seventh-generation Intel Core i7 CPU that reaches a clock speed of 4.2GHz in Turbo Boost, along with an NVIDIA Quadro M620 graphics card. The tablet's 32GB of RAM should also make for smooth multitasking even with multiple canvases open. In addition to premium internal components, the ZBook X2 also sports a slew of ports like USB-A, HDMI, Thunderbolt 3 and an SD card slot. To keep your investment safe from falls, the device is also designed to meet MIL-STD-810G durability standards.

The rest of the ZBook's features are relatively straightforward. It has a fingerprint sensor and a 720p webcam that supports Windows Hello's facial recognition technology for convenient logins. HP estimates the ZBook X2 can last up to 10 hours, and that it can recharge to 50 percent in 30 minutes. 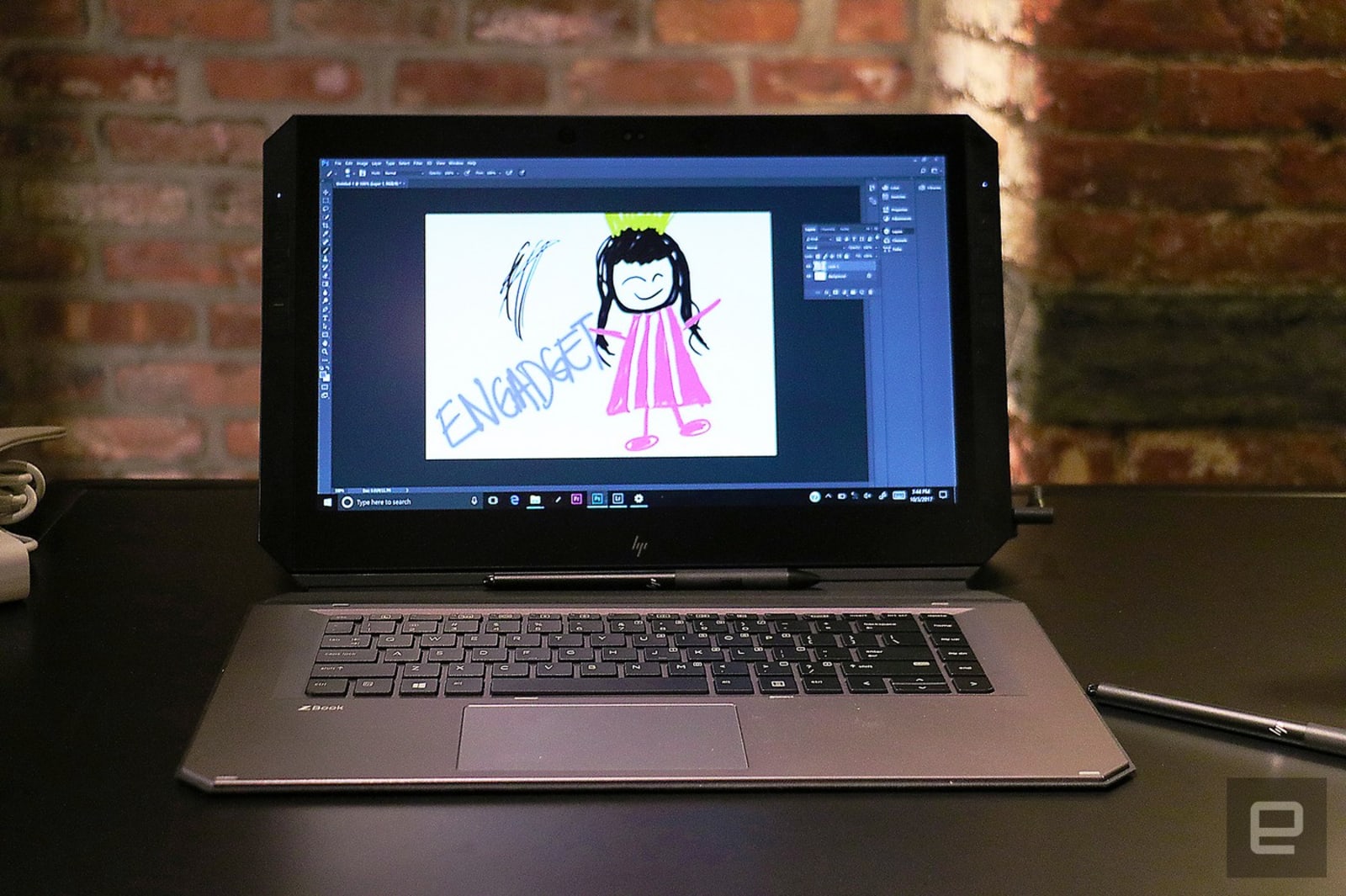 That all adds up to a detachable that does indeed sound powerful, although to be fair I didn't push the ZBook X2 very hard during my demo. The thing is, I have a hard time believing that even the most ardent Adobe fan will be willing to spend $1,749 just to get the better screen and pen in such a hulking tablet. Someone with such specific needs is probably already happy with their Wacom Bamboo desktop digitizer, and also possibly even prefers macOS over Windows. An iPad Pro or a Surface Pro may not be as powerful, nor will they offer the same dedicated shortcut buttons and comfortable keyboard that HP does, but Apple's and Microsoft's tablets are easier to tote around. The ZBook X2 will be available in December, so you can spend that time wondering if you need it, or start saving up if it's something you want.