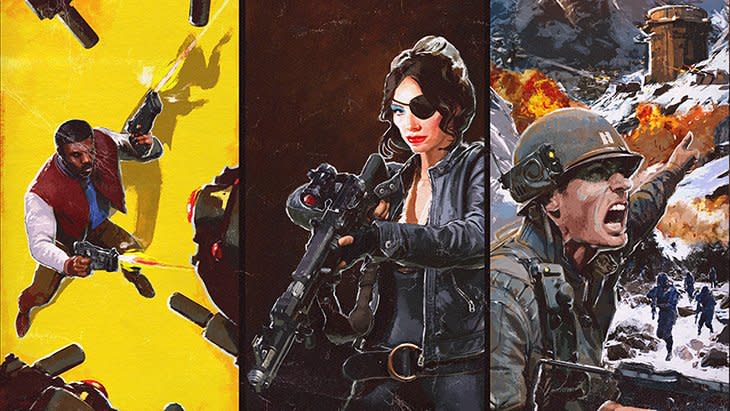 Fans of MachineGames' wonderful Nazi-killing shooter Wolfenstein: The New Colossus were probably wondering what the title screen's countdown would reveal. Last week, we found out: A delightful trio of hour-long mini-missions featuring characters from the game's upcoming DLC. Today, the studio released a roadmap revealing the release dates for the game's new content, and the first will launch on December 14th.

Folks who pre-ordered The New Colossus or bought its Season Pass already got a look into The Freedom Chronicles, as the DLC is known, when Episode Zero dropped on November 7th. Instead of Terror Billy, players got to toy with three different characters, each equipped with a different endgame gadget (stilts, sneaking compressor, battering ram) from the main campaign. Each full DLC entry will focus on one of them. Next month, players will get The Adventures of Gunslinger Joe, aka Joseph Stallion, the former football star fond of tackling Nazis into the ground. Often with bullets.

The Diaries of Agent Silent Death, starring the eponymous femme fatale assassin, follows on January 30th. Accordingly, her characters sports the upgrade allowing players to slip inside small tunnels for a stealthier playstyle. Last of the announced DLC is The Deeds of Captain Wilkins arriving sometime in March 2018, which lets you use the undoubted king of the upgrades, the Battle Stilts, to gun down some Nazi scum. You can get all three in the game's $25 Season Pass or buy individually for an as-yet-unannounced per-episode price. Given the promise of "Over nine hours of content" on MachineGames' DLC poster in its roadmap tweet, about three hours for around $8 doesn't sound like too bad a deal.

In this article: av, dlc, fps, gaming, Wolfenstein, wolfensteinthenewcolossus
All products recommended by Engadget are selected by our editorial team, independent of our parent company. Some of our stories include affiliate links. If you buy something through one of these links, we may earn an affiliate commission.