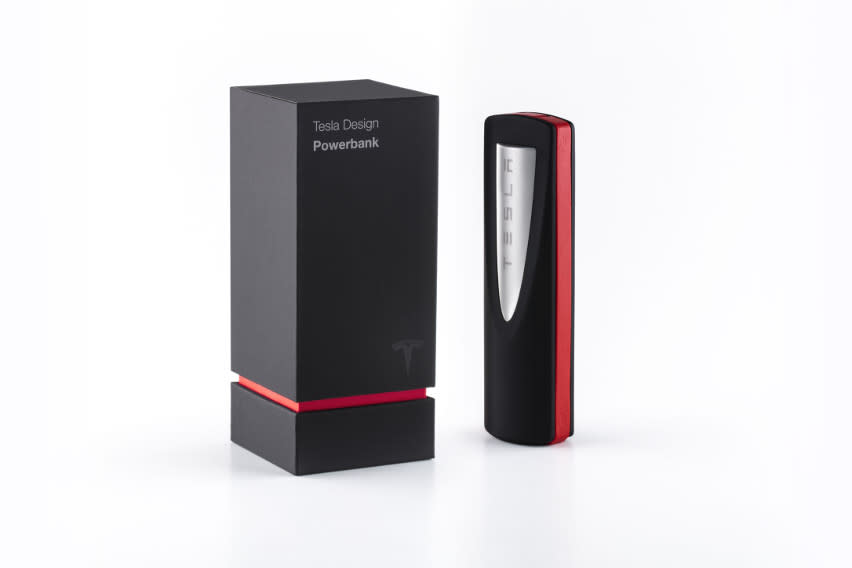 Tesla dropped an electric semi truck and a new Roadster at a recent event, but it apparently launched another product that didn't get any stage time. The automaker has released, of all things, an external battery pack (the Powerbank) with USB, microUSB and Apple lightning connections that can charge your Android phone or iPhone on the go. Maybe that's not as strange as it sounds, considering Tesla has a Gigafactory that pumps out batteries, including one for homes called Powerwall. In fact, the Powerbank uses a single 18650 cell with 3,350mAh capacity that's also found in its Model S and X electric vehicles. (Obviously, though, the cars are powered by more than one cell.)

But you likely wouldn't buy a $45 battery pack with those specs if it weren't designed by Tesla when there are numerous cheaper alternatives. That's probably why the company made sure it looks like a Tesla product through and through. It was designed after Tesla Design Studio's Supercharger monument and wouldn't look out of place inside one of the EV-maker's cars. Unfortunately, you can't get one anymore, no matter how much you're willing and able to shell out $45 for the portable battery: it's already marked sold out on the company's website. You'll just have to cross your fingers and hope Elon Musk and his team decide to produce another batch.

In this article: gadgetry, gadgets, gear, powerbank, tesla
All products recommended by Engadget are selected by our editorial team, independent of our parent company. Some of our stories include affiliate links. If you buy something through one of these links, we may earn an affiliate commission.