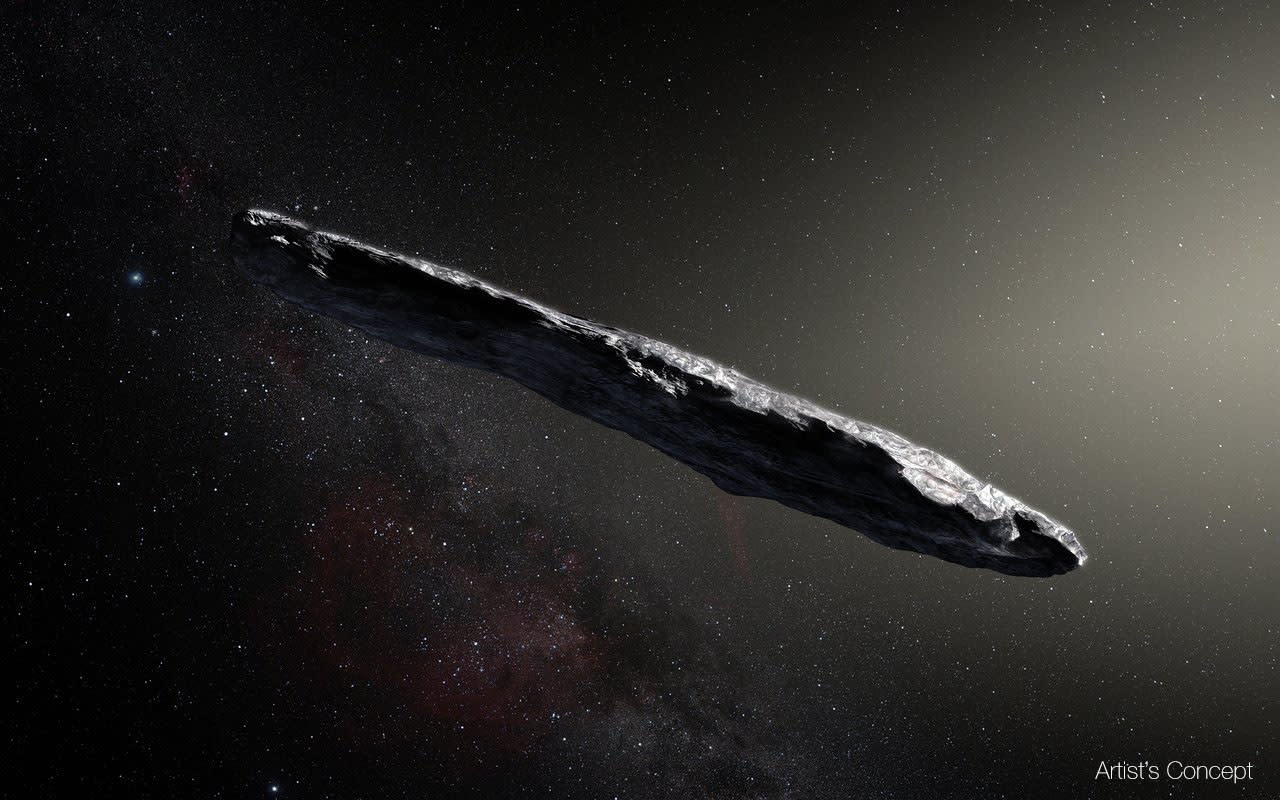 Last month, astronomers running the Pan-STARRS 1 telescope in Hawaii spotted an intriguing object moving through our solar system and it became clear pretty quickly that the object, whether it was a comet or an asteroid, had come from outside of our solar system. Now, in a paper published this week in the journal Nature, researchers have described the interstellar visitor, dubbed 'Oumuamua, including its peculiarities as well as its similarities to objects originating in our own solar system.

First, it turns out 'Oumuamua, which is Hawaiian for "messenger from afar arriving first," is most likely an asteroid, not a comet, because it lacks a comet's hallmark coma -- the cloud of gas that surrounds and trails a comet. Secondly, it has a super weird shape. It's very long and skinny, about 1,300 feet long and around 130 feet wide, which was discovered because of the asteroid's massive change in brightness as astronomers observed it moving away from Earth. "This unusually large variation in brightness means that the object is highly elongated: about ten times as long as it is wide, with a complex, convoluted shape," Karen Meech, who led the international effort to observe the asteroid, said in a statement. Additionally, 'Oumuamua is dark red in color, which is likely due to all of the cosmic rays that have hit it during the hundreds of millions of years it has been traveling through space.

The asteroid entered our solar system from above and made its closest pass by Earth on October 14th. Once Pan-STARRS 1 spotted it, a number of other observatories, including the European Southern Observatory's (ESO) Very Large Telescope, put their sights on it too in hopes of getting as much information about the asteroid as possible during its short visit. 'Oumuamua is now on a path that will eventually take it back out of our solar system. It passed Mars' orbit on November 1st and is set to pass Jupiter's next May and Saturn's in January of 2019. Some ground-based telescopes are continuing to track the asteroid, as are two of NASA's space telescopes -- Hubble and Spitzer, -- until it fades from view, which will probably be sometime in mid-December.

While astronomers estimate that interstellar objects pass through our solar system around once per year, this is the first time one has been spotted, which is thanks to powerful telescopes like Pan-STARRS 1. Interestingly, though its shape is wildly different from our own asteroids', 'Oumuamua's composition is quite similar, and both of those observations could help astronomers learn more about other solar systems and how they're formed. "We are continuing to observe this unique object," ESO researcher Olivier Hainaut said in a statement, "and we hope to more accurately pin down where it came from and where it is going next on its tour of the galaxy. And now that we have found the first interstellar rock, we are getting ready for the next ones!"

In this article: asteroid, astronomy, comet, earth, ESO, gear, HubbleSpaceTelescope, interstellar, jupiter, mars, Oumuamua, Pan-starrs1, research, saturn, space, SpitzerSpaceTelescope, telescope, VeryLargeTelescope, video
All products recommended by Engadget are selected by our editorial team, independent of our parent company. Some of our stories include affiliate links. If you buy something through one of these links, we may earn an affiliate commission.