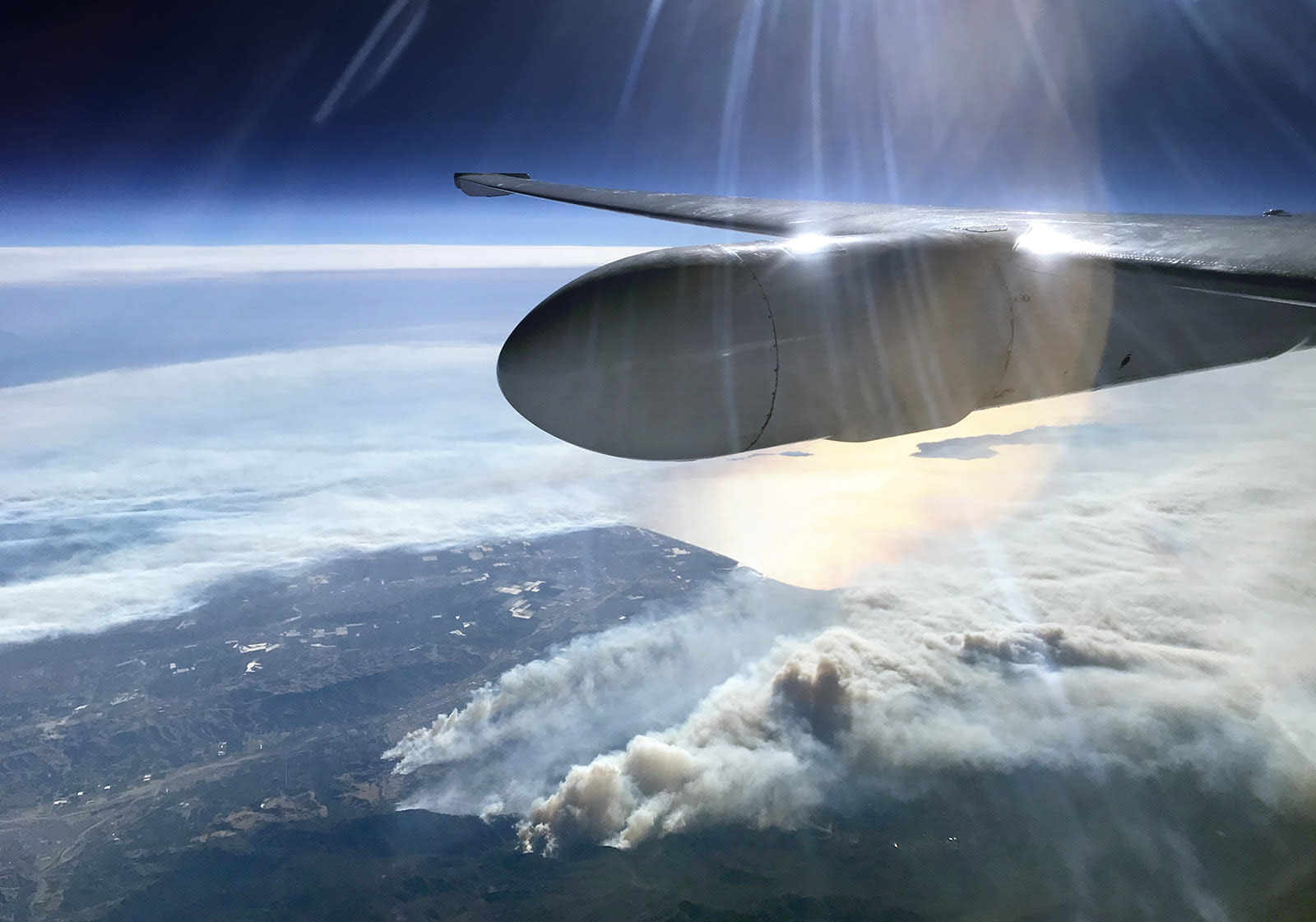 For the second time this year, swaths of California are burning out of control thanks to unseasonably warm and dry temperatures. To better study what's happening and assess the environmental impact, NASA deployed its high-altitude ER-2 aircraft with a host of scientific instruments on board. In the image above, sunlight glints off its wing as it flies over the Thomas Fire in Ventura county at around 65,000 feet.

The ER-2 has been scanning the blazes with a couple of interesting instruments that have flown, or will fly aboard the international space station (ISS). One of them is the AVIRIS spectrometer that can penetrate cloud, dust and smoke to see the ground below. While providing a clear image of the ground, it can also measure fine details in vegetation like water content and plant species growing. Eventually, a similar instrument will be launched into space.

On the flight pictured above, however, it's carrying another instrument, the Cloud-Aerosol Multi-Angle Lidar (CAMAL). It was originally developed to a validate space-based version of the instrument called CATS, which operated for 33 months aboard the ISS, before going out of service last month. Now, CAMAL is being used for a similar purpose aboard the ER-2. Unlike other types of LiDAR used to scan the ground, CAMAL can study pollution, smoke, clouds and other atmospheric phenomena. Another view of the Thomas Fires from space

Ideally, NASA flies the AVIRIS spectrometer over regions before a fire starts to get a base measurement, then overflies the same spot again afterwards. Comparing the before and after images gives researchers an idea about the severity of a fire.

Meanwhile, when the blaze is active, the area can be scanned with the CAMAL LiDAR to get a picture of the dust, smoke and cloud cover in the area. Using the space-based version of the instrument, for instance, NASA scanned the October wildfires, finding plumes extending as high as 2-3 miles that created "the worst air quality ever recorded in many parts of the Bay Area," NASA's CATS team said.

"The vision is that these types of measurements could be available from space in the next decade," said JPL's Rob Green. "The resulting information would then be used to develop fuel maps in advance that could be used to make better predictions about where you could mitigate risk by clearing brush and trees." CAMAL can also be used by researchers to study cloud formations and learn more about climate change, which is helping fuel the wildfires in the first place.