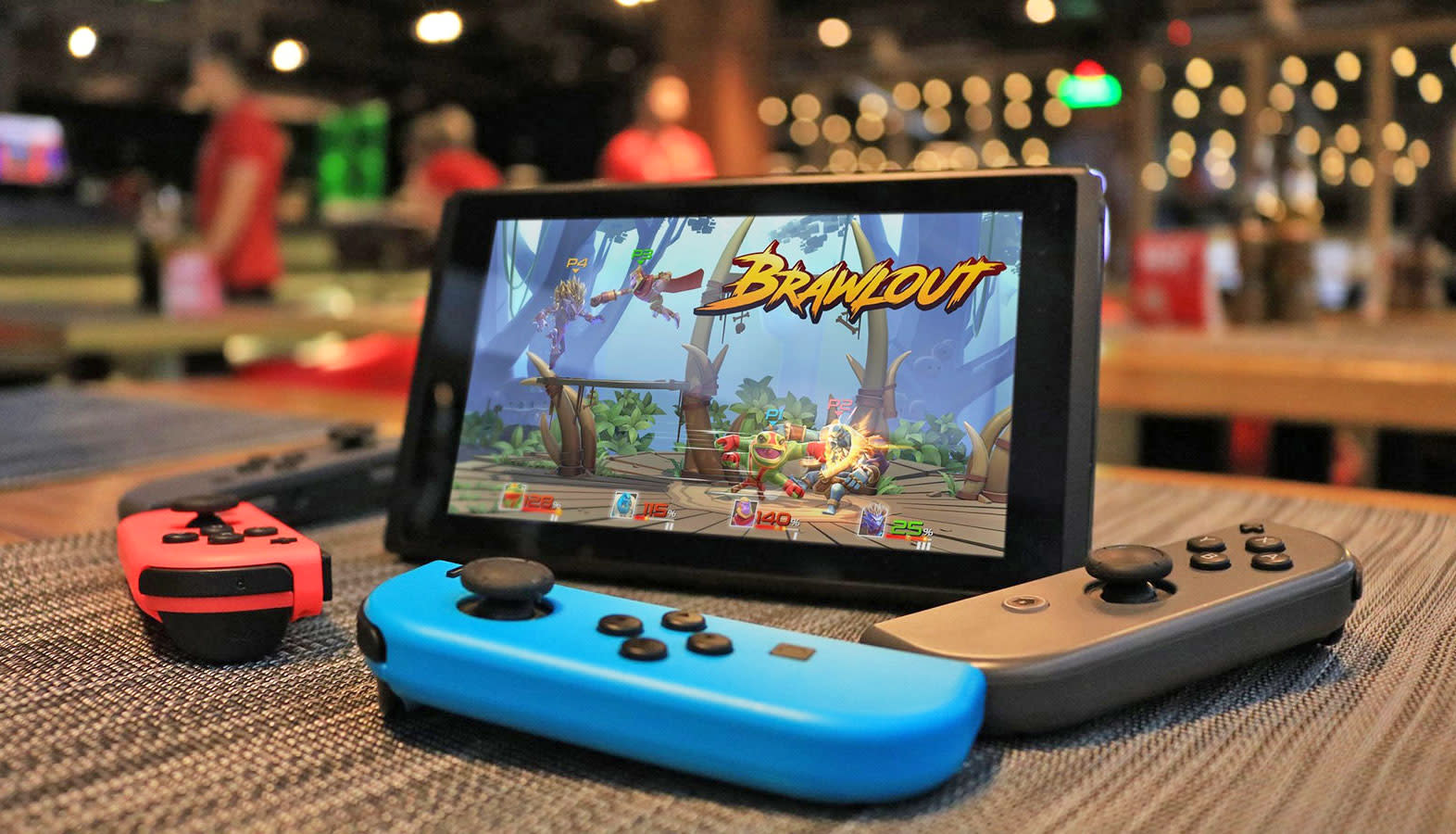 The first Super Smash Bros. game launched on the N64 almost 20 years ago and became an instant classic. Every main Nintendo console since has brought a new entry to the series, but the inevitable iteration on the Switch hasn't been announced. Tomorrow, gamers will get the next best thing: Brawlout, the 2D fighter heavily inspired by the Smash Bros. franchise. But will reaching Nintendo's console first let Brawlout win fans' hearts?

The indie game has plenty to attract players itching for a polished 2D brawler. Brawlout's roster isn't deep, at eight playable characters (and ten slightly tweaked alternate versions of those, à la Street Fighter's Ken), but more are scheduled in the next few months. The game is so close to Smash Bros. that veterans will be right at home after a few minutes of play. And at $20, it's cheap enough to slake your Smash Bros. thirst until that franchise comes to the Switch.

But Brawlout has something not even a top-tier Nintendo title can offer: After it arrives on the Switch, Brawlout is coming to PS4 and Xbox One early next year.

That could propel Brawlout beyond the game it's imitating. Finally, Smash Bros. fans without a Nintendo console will be able to play the next best thing. And, heck, they might end up preferring the indie underdog — its developers made their own tweaks to the Smash Bros. formula to favor more aggressive play. Specifically, they did away with any sort of shields or blocking and restricted throwing to specific "grappler" characters. Without defensive tools for players to lean on, they must perfect the intricate timing between enemy attacks to make their move.

"Just by living in the same genre, there are always going to be fans of [Smash Bros.] who find similarities," Angry Mob CEO Bogdan Iliesiu told Engadget, "but Brawlout is much more closely related to traditional fighting games like Street Fighter and Mortal Kombat. We've focused heavily on aggressive mechanics so that new players will be able to easily nail impressive combos while not feeling overwhelmed by friends who've had a bit more practice. It's easy to learn and difficult to master, which we think is a good way to appeal to both casual players and gamers looking to dedicate the time to honing their skills to become pros."

Angry Mob strove to make a game the pros would play, and cultivated a group of about 30 skilled beta players for feedback. As part of a much smaller studio than Nintendo, Brawlout's developers can quickly make changes to please the game's playerbase, something they see as a strength.

But high-skill play isn't Smash Bros.' biggest draw; rather, it's that its roster is stuffed with Nintendo stars and other video game icons. Without some of the most recognizable characters in gaming, Brawlout has an uphill battle to attract new players.

It does have the next best thing, though: a small but growing number of heroes borrowed from successful indie titles. The sword-wielding protagonist from Hyper Light Drifter was added to the game back in August, while the luchador wrestler Juan from Guacamélee joined in early December. Assuming contract negotiations pan out, Angry Mob plans to add another indie game luminary in January and possibly another in March. And the plan is for every platform to get the new brawlers at the same time.

As anyone who publishes on multiple platforms knows, however, it's a challenge to coordinate new content releases. Because Brawlout is built on Unity, it's easy to support the game on all platforms, Iliesiu said. But they still have to slog through each particular certification process before adding content.

But first Angry Mob has to release the game on PS4 and Xbox One, which it aims to do in early 2018. There's still a list of features and guidelines to get running on each platform. Once it comes out on the other consoles, non-Nintendo players will finally get a taste of Smash-like fights. Unintentionally, this will immunize Brawlout from a big problem facing the Smash Bros. community: dwindling stock of the superior GameCube controller. But even though all leading consoles will carry the game, cross-platform play will still be a pipe dream. Not impossible, but difficult and unlikely, Iliesiu said.

"[Cross-play is] really tricky for a fighting game," he explained, "because in a fighting game, whenever you do cross-platform, you have to have a server. And if you have a server in our game, instead of four frames of input lag, you get like at least eight frames on top of the input lag, and the experience won't be as good. So we have to see. We hope to have a large playerbase on each platform, and that solves it all."

After it's out on PS4 and Xbox One, the game will be within reach of another milestone: finally exiting Early Access on Steam, which it's been in since publicly launching in April 2017. There are a few networking tools to add first, and then the Brawlout team can focus on monetization. Since it's an indie title, Iliesiu made it clear that growing the playerbase was more important than scoring microtransactions to unlock content, which means that new brawlers will be free for everyone. Instead, Angry Mob might focus on selling character skins and other visual additions (which they've already started doing with streamer-designed skins), but plans are still up in the air.

In the vacuum left by a Nintendo console without a Smash Bros. game, Angry Mob is racing to grow its community while building the game's roster. At some point in the future, a Smash Bros. game will arrive on the Switch, and the faithful will come flocking. But Angry Mob believes its game is distinctive in its own right.

"We've focused on a different approach to the combat flow, with more focus on aggressive play, so that's where I'd say our main difference is. We've also incorporated a Rage Mode, to allow players to get stronger as they take more damage, which we think lends itself to a more balanced round," Iliesiu said. "Our biggest surprise was how well it lent itself to a party game while still retaining the mechanics to allow it to stand as a competitive fighter. While our pro players might come from fans of other platform fighter games, we tend to see a lot of new players who are more interested in having a fun time that has them laughing until they hurt."

Brawlout costs $20 on all platforms and comes out tomorrow on the Switch. Xbox One and PS4 versions are slated to come out sometime in early 2018, but it's also available on Steam.

In this article: av, Brawlout, gaming, nintendo, SuperSmashBros
All products recommended by Engadget are selected by our editorial team, independent of our parent company. Some of our stories include affiliate links. If you buy something through one of these links, we may earn an affiliate commission.