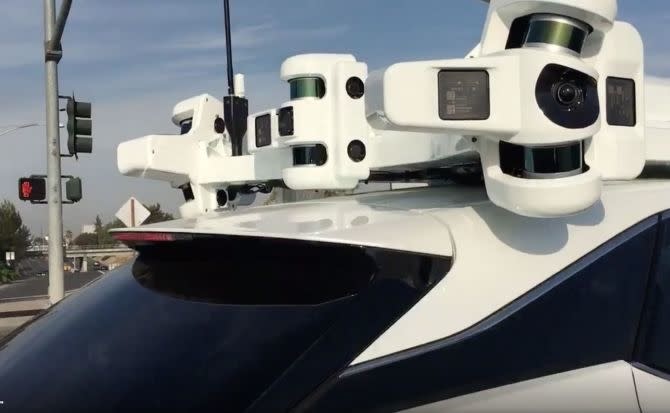 Apple has been working on some sort of autonomous car for a while now. The system — apparently an add-on to existing vehicles — has been seen in a research paper back in November. More plans appeared in a presentation by Carnegie Mellon professor of AI Ruslan Salakhutdinov this month. Now, according to a patent discovered by Autoblog, Apple's 2015 application for an autonomous navigation system has just been published.

The patent's abstract describes an autonomous navigation system that creates a "characterization" of a driving route. This route is created when drivers manually navigate along the route. Once that route has been manually driven a number of times to satisfy a "confidence indicator," then the car can drive that route by itself. The characterizations can be updated as changes in the route happen, and can include special driving rules based on "monitoring the navigation of one or more vehicles of the route." There's also mention of some sort of remote database of routes that cars can upload routes to and download routes from, which sounds a bit like an extension of Apple Maps.

While this patent application is a couple of years old and simply describes a logic system that Apple wanted to use to inform autonomous driving, it's an interesting approach. Using driving data from many drivers can likely help the Apple system learn routes faster and more accurately than a single car with sensors alone. It's also likely that such a system will need to work in tandem with vehicle-based sensors as well.

In this article: apple, applecar, autonomous, autonomousnavigation, gear, icar, navigation, patent, transportation
All products recommended by Engadget are selected by our editorial team, independent of our parent company. Some of our stories include affiliate links. If you buy something through one of these links, we may earn an affiliate commission.