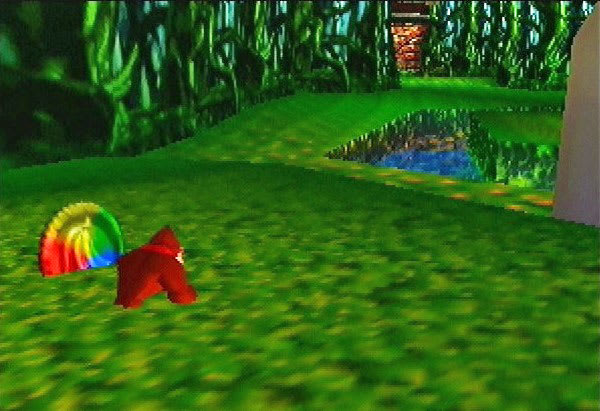 The 3D platformer Donkey Kong 64 was lauded for its expansive worlds and multitude of well-hidden collectibles when it launched on the Nintendo 64 in 1999. Like many games of the era, it has enjoyed a peculiar afterlife as speedrunners blitz through it in record time under various conditions, like picking up each of the 976 banana coins found within. Unfortunately, all those completionist runs now seem to be invalid: 17 years after the game came out, streamer Isotarge has found a 977th coin.

Turns out the collectible was hidden underground in the game's fifth level, Fungi Forest, but the telltale patch of dirt indicating buried treasure in the game was hidden by a patch of tall grass. Isotarge was examining save data for that stage and discovered that the information for a particular pickup, rainbow coins, was incomplete. Using analysis tools, they pinpointed its location and unearthed it. While Isotarge is no stranger to using glitches to find out-of-bounds items likely leftover by developers, this particular coin is in fair territory and can be plucked from the ground using an ordinary character move.

As noted above, this means the leaderboards for complete runs of Donkey Kong 64 will likely have to be reset. But as Kotaku points out, this new factor could shift player strategy in the game's highly competitive speedrunning community. Discoveries like this are what revitalize even the most well-worn titles.

"Many runs were invalidated because of this discovery," Isotage told Kotaku. "It's one way to keep the community active. I'm looking forward to seeing speedrunners claim back those records"

Source: Kotaku
In this article: av, DonkeyKong, donkeykong64, gaming, internet, nintendo, Nintendo64, SpeedRun
All products recommended by Engadget are selected by our editorial team, independent of our parent company. Some of our stories include affiliate links. If you buy something through one of these links, we may earn an affiliate commission.