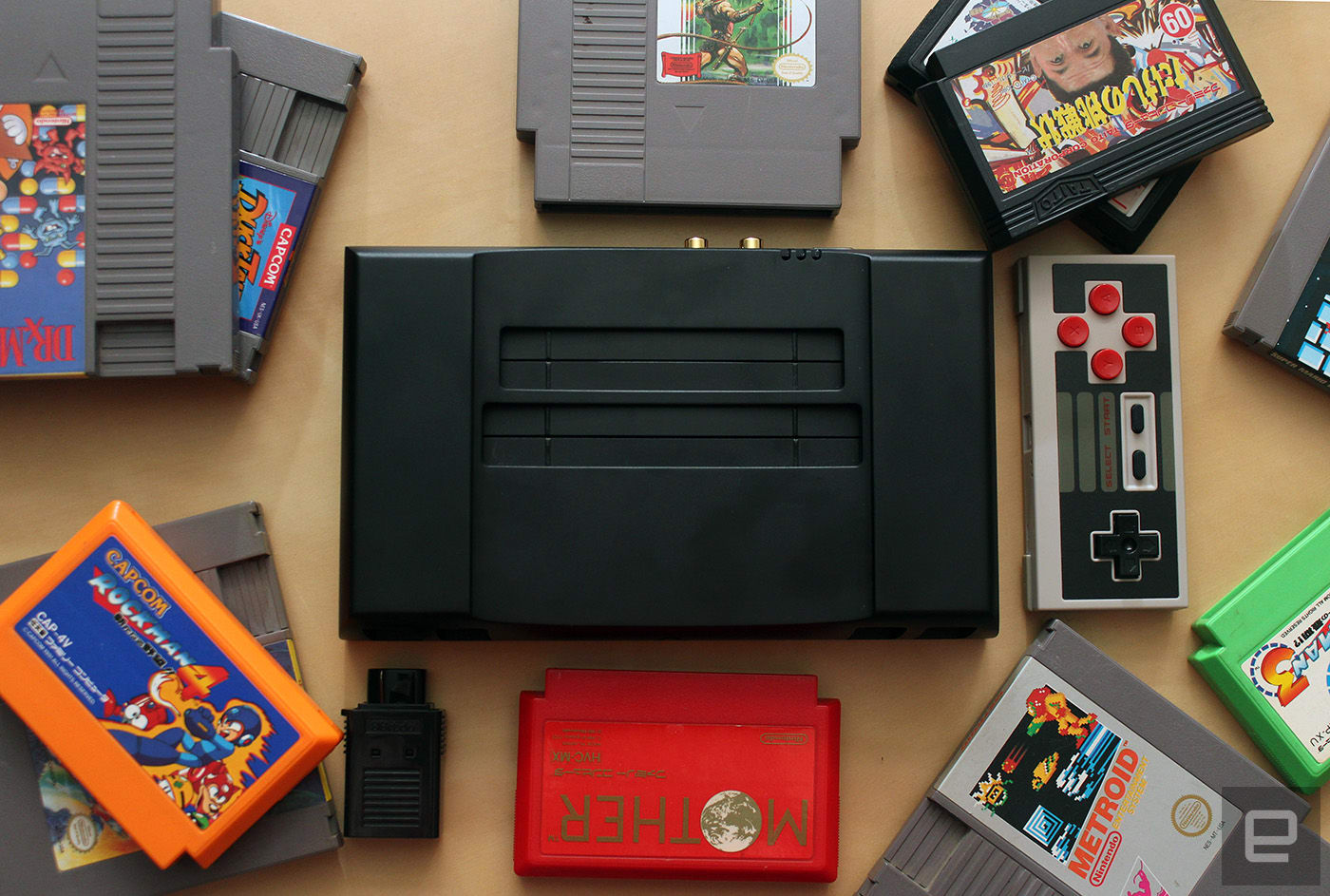 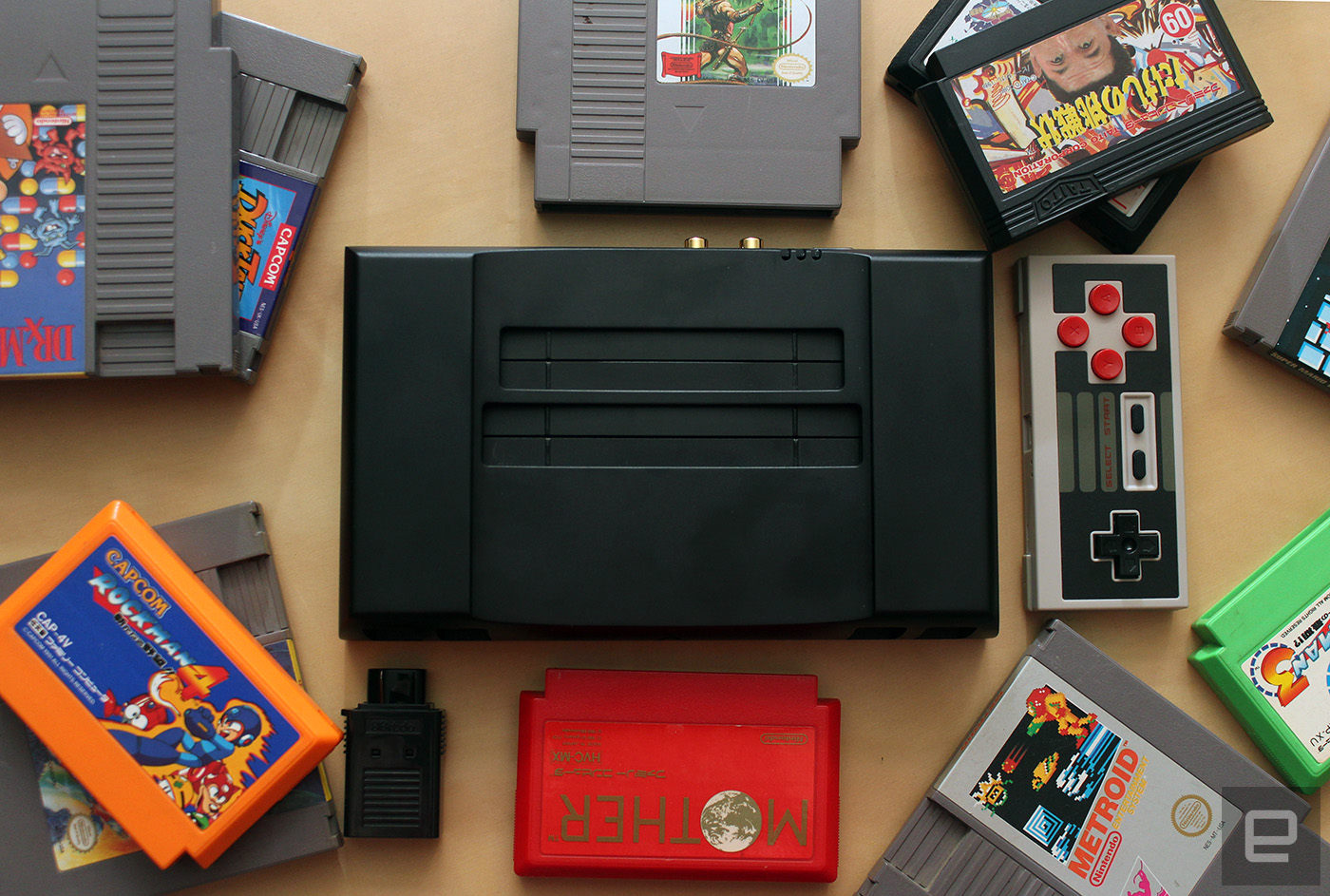 Trying to play an NES cartridge on Nintendo's original, 30-year-old hardware can be an exercise in frustration. The console's ancient composite cables offer terrible image quality on modern televisions, and getting games to actually run is a ballet of reseating, jostling and, of course, blowing on game cartridges. Nintendo's own NES Classic Edition and the Wii U and 3DS virtual consoles offer refuge for the casual gamer's nostalgic yearnings, but collectors looking for an authentic, cartridge-based retro gaming experience have long suffered under the dark shadow of compromise. Is it better to play on the original, but unreliable, hardware, or an NES clone plagued with compatibility issues? With the Analogue Nt Mini, you may not have to tolerate either -- but at $449, Analogue's compromise-free Nintendo doesn't come cheap. Analogue has a history of draping classic game consoles in premium trappings. Its CMVS and CMVS Slim consoles encased the internals of a Neo Geo MVS arcade cabinet in a luxurious walnut shell. It later created the original Analogue Nt, a premium aftermarket Nintendo console that married salvaged NES CPU and PPU chips with new hardware and a gorgeous aluminum chassis. The Nt's new, smaller variant is no slouch, either. It packs the same features as the original into a smaller, equally beautiful package.

Still, there's a key difference: Unlike the original Nt, the Mini is all original hardware. No repurposed silicon. No cannibalized parts. Like the RetroUSB AVS, the Analogue uses a customized FPGA processor to perfectly recreate the NES's functionality, even to a fault. If a game produced a specific glitch on the original hardware, then, that same error will present itself on the Analogue Nt. Even so, the console's creator balks at the notion that the Analogue Nt Mini is an "NES clone." 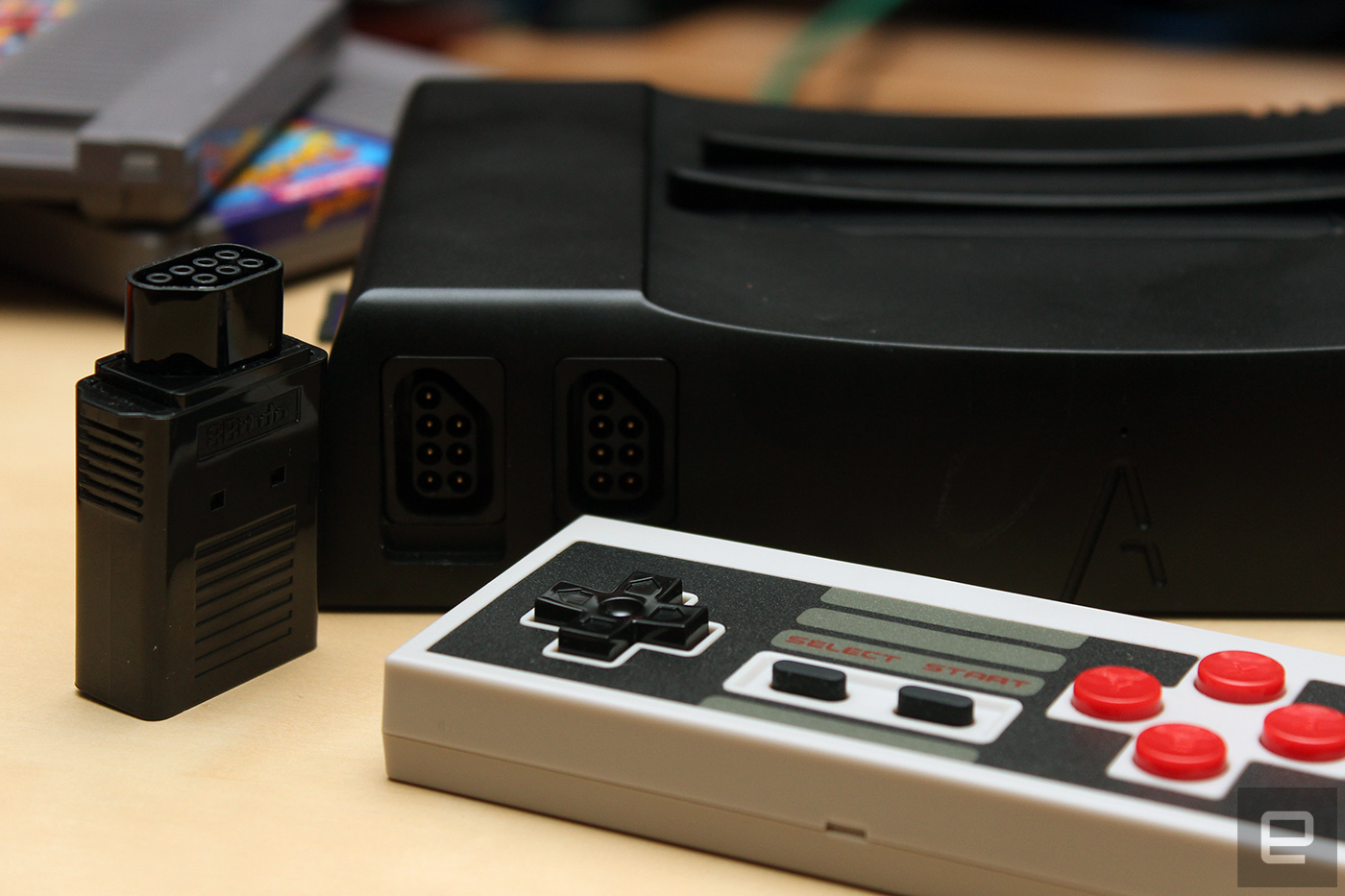 "I would not call the Nt Mini an NES clone," Christopher Taber said in an email. "It's an aftermarket video-game system that allows you to play Nintendo's entire 8-bit console era with zero compromises." In the retro-gaming space, the distinction is something of a mark of quality. "Clone" consoles are typically low-rent system-on-a-chip builds that are better known for their faults than merits. Typical NES clones suffer from graphical glitches, incompatibility issues and, most notably, incorrect sound reproduction. Taber describes the Nt Mini as the antithesis of "clone" consoles, a "reference-quality video game system" that can play classic games exactly as the Nintendo's own hardware did, with zero input lag and the option to use all of the original accessories.

That promise stretches further than you might think. In addition to supporting every US NES game and accessory, the Nt Mini plays nice with all of Japan's cartridges and add-ons. The console has an extra cartridge slot for Famicom games and an accessory port for Japanese accessories. It even an analog audio jack -- a special feature required to accommodate games that used the Famicom's embedded microphone, like Takeshi's Challenge or the original Japanese release of The Legend of Zelda. When Taber says the Nt Mini can do anything the original consoles can do, he means it. Even the original hardware's video output standards are available: In addition to an HDMI port capable of outputting at 1080p, the Nt Mini supports s-video, component and composite video out via VGA accessory cables. 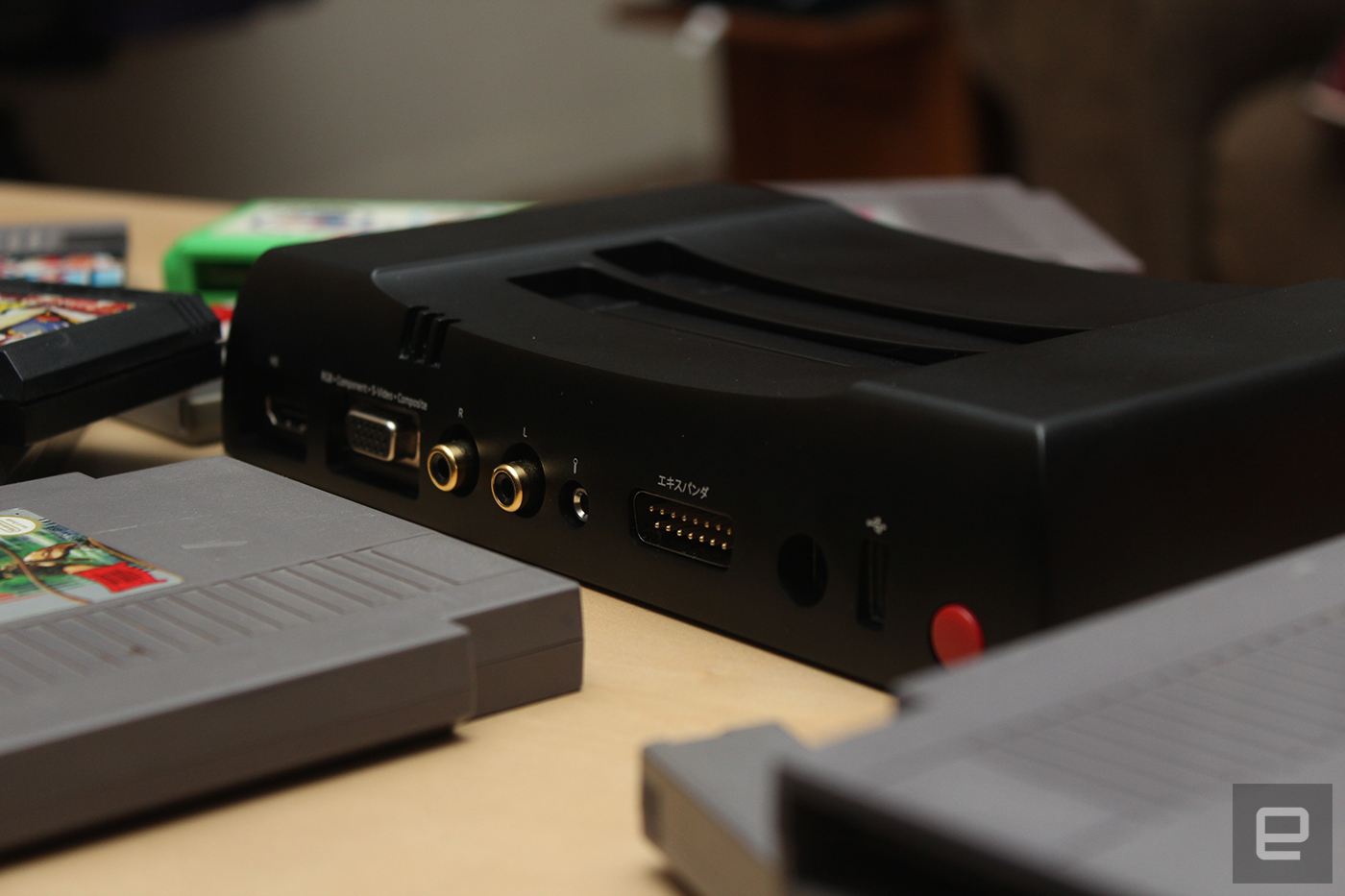 That alone is a lot to ask of a device designed to play games from a bygone era, but the Nt Mini goes a step further by being simply beautiful. The Mini's chassis is milled from a single block of hand-finished aircraft-grade aluminum. This metallic facade is broken only by the plastic controller ports, modeled after the NES originals, and the plexiglass undercarriage that acts as a window to the console's motherboard. Even the cartridge slot's dust flaps are made of aluminum. Taber says the build quality is a big part of the console's high price. "I'd rather save up and buy something really nice that's going to last for virtually my entire life," he said. "Something to cherish forever. The Nt Mini is designed in this light."

Between the NES Classic, Nintendo's Virtual Console and other aftermarket consoles like the Retron 5 and RetroUSB AVS, it can be hard to imagine why the world needed another NES console, let alone a premium one. For Taber, it's more than just a passion for accurately playing his favorite classics — it's a matter of preserving history. "Video games as a medium are finally, but just barely, becoming recognized as a medium that has a rich, cultural history," he said. "We try to push people to explore the history of video games in the same way that one would explore the history of a music genre, or a decade in film." The era of the original Nintendo Entertainment System was a turning point for the industry, and a well modern developers return to for inspiration even today. 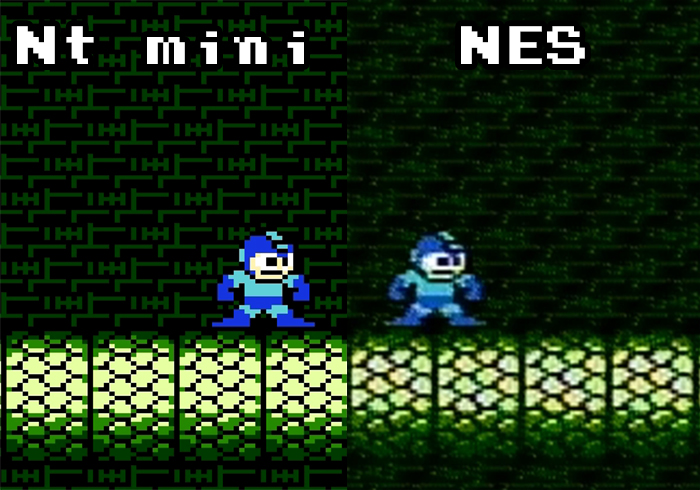 Taber sees the Analogue Nt Mini as a conduit to a bygone era of games. Yes, Nintendo has made its most iconic and popular classics available on newer devices, but the official digital library represents only small portion of the full NES library. "There are so many unique developers and games," Taber explains, "many of which you can't experience in any other way except with the original hardware." The Nt Mini offers enthusiasts an authentic, tangible way to play these classics without struggling with outdated technology or subpar console clones. All romanticizing aside, the premium console excels at this task.

Hyperkin's Retron 5, RetroUSB's AVS and Nintendo's own NES Classic Edition showed us that native HDMI output can bring out details in classic games we've never seen before. The Analogue Nt Mini takes that concept and perfects it. It's not just that the console pipes classic games to modern TVs with unparalleled clarity; it's that it does everything just a little bit better than the competition. When the AVS is pushing games out at 720p, the Nt Mini is outputting pixels at a full 1080p. Pitted against the Retron 5's oversaturated colors, Analogue's palette looks like a dead ringer for the original Nintendo. Even the official hardware doesn't quite measure up: The NES Classic Edition looks great, but offers no way to hide portions of the game that were designed to be obscured by TV overscan. The Nt can handle those unwanted edges with just a few simple ticks in its menu.

In fact, that menu is a cornucopia of bells and whistles, giving the user control over resolution settings, width and height-positioning, the aforementioned edge cropping to clip off unused bits of game output, five different types of scan-line overlays with a variable depth-slider, and more than a dozen ways to tweak a game's visual aesthetic — including high-quality pixel scaling to smooth out the NES's sharp edges, the ability to reduce in-game sprite flickering and a robust collection of palette options to make sure the colors are just right. 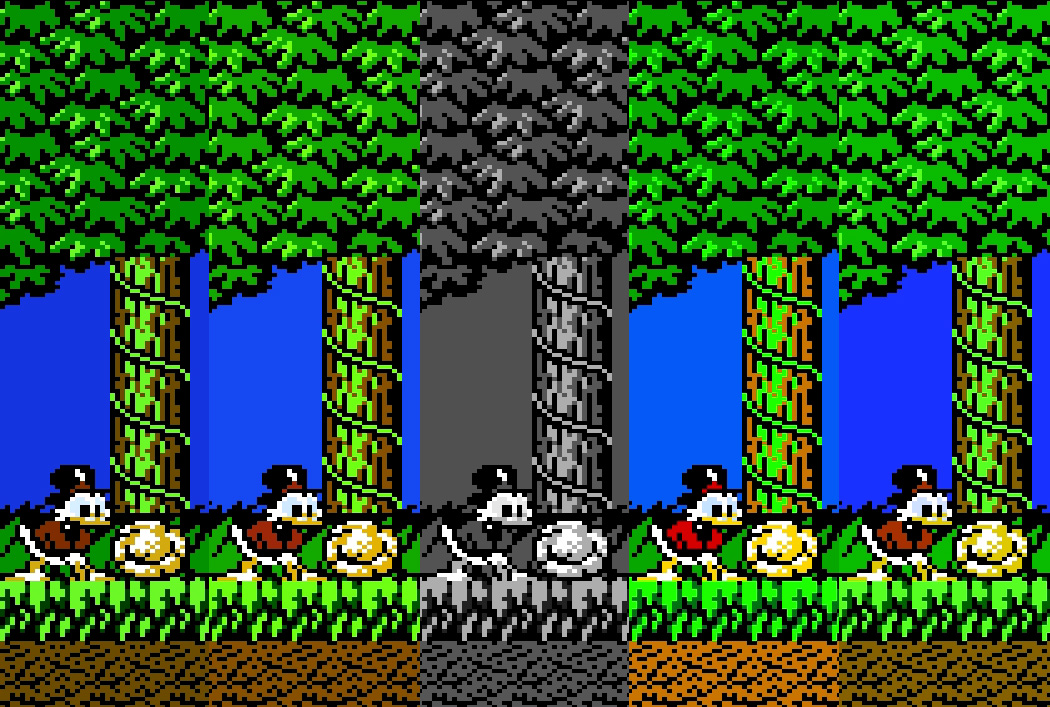 All of the visual options are useful, but being able to swap color palettes on the fly is a godsend; getting the right look for a game is more complicated than you might think. Do you choose a palette like FirebrandX, which pulls a direct color capture from the original NES, or the FCEUX color scheme, which tries to display hues as they might appear on an old NTSC television? Both are available on the Nt Mini, as well as a black-and-white color scheme, the Beware palette and one that mimics Nintendo's PlayChoice-10 arcade cabinets. You can even load a custom set of colors though the console's SD card slot, just in case the included palettes don't quite look like the NES you remember.

The dizzying area of options even includes a sound menu, where individual audio channels can be disabled, made louder or directly tweaked to interpret the game's music differently. The Nt can even play NSF music files from the SD card, effectively becoming a convenient hardware music player for chiptune audio files designed to be played on the original Nintendo.

It almost seems like too much. More options than any reasonable person would need to experience Nintendo's 8-bit era — but Taber says that's kind of the point. "Our goal is to make products that allow people to explore the history of video games in an unprecedented way." He compares playing NES games on inferior clone devices to watching Stanley Kubrick's 2001: a Space Odyssey on DVD instead of Blu-Ray. "Sure, a lot of people don't give a shit," he said. "Well, we do." 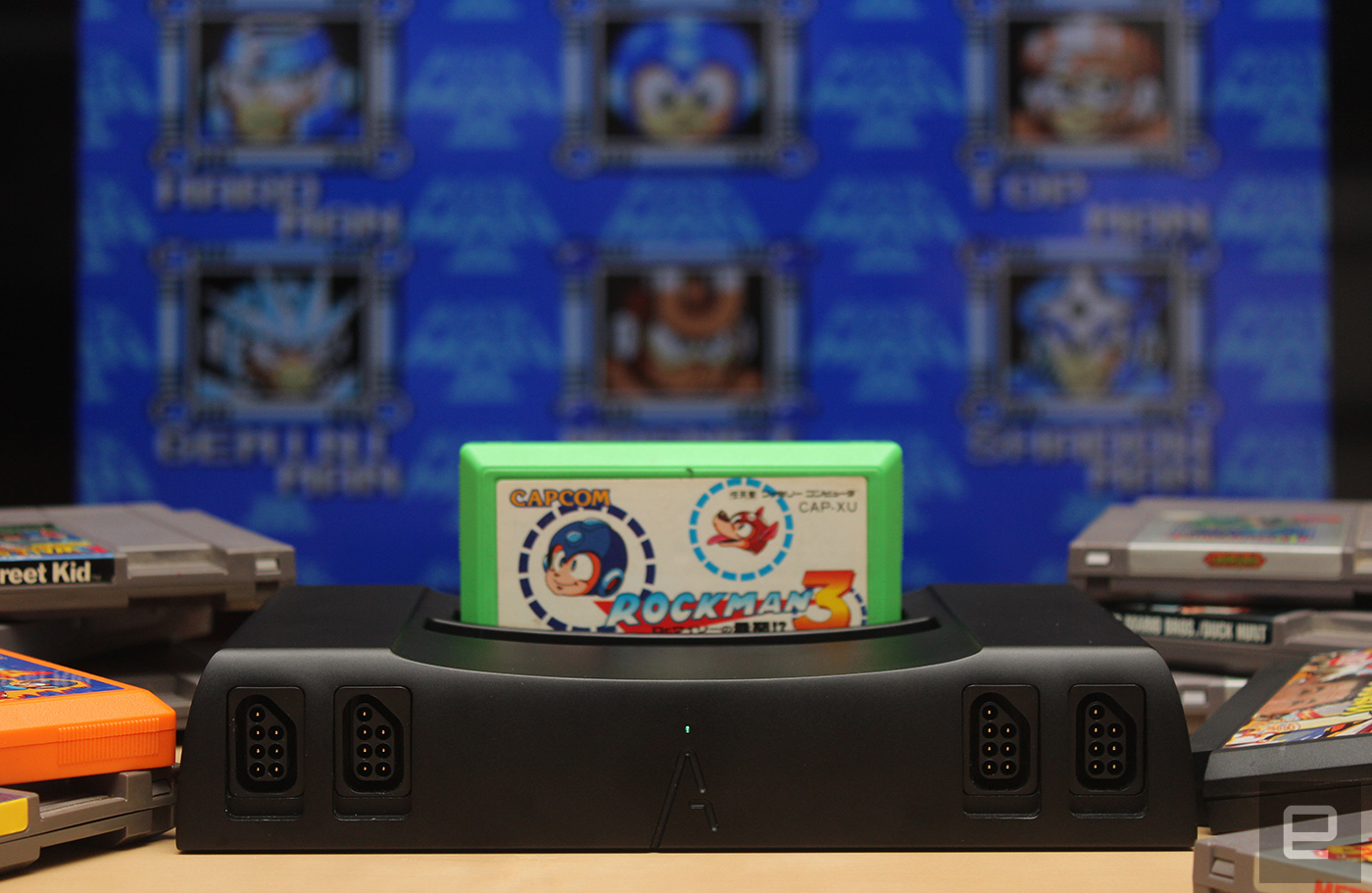 Despite his passion for video-game history and beautiful hardware, Taber is realistic. He knows the Analogue Nt isn't for everybody. "It's important to understand that the Nt Mini is not exactly a mainstream product," he said. "We designed and manufacture every single piece of the Nt Mini with an extraordinary focus on detail. It is designed to last a lifetime." With its solid aluminum chassis and a dedication to using more durable components than most after market game consoles, it just might last a lifetime — but even Taber admits the effort put into the console is "borderline unreasonable." Casual gamers would probably be happy enough with the official NES Classic. But then again, that's not really what the Analogue Nt Mini is supposed to be.

"Ultimately," Taber concludes, "to take a photograph, listen to music or watch a movie, you can do these things in countless different ways with a range of different prices. Playing retro games is no different. The Nt Mini is the best, and I'm willing to bet it always will be."

The Analogue Nt Mini isn't designed for someone merely looking to relive fond memories of their gaming past; it's a device created for a passionate enthusiast who wants a pure retro experience with no compromises. Something better than his or her nostalgia asks for. The $449 Nt Mini absolutely does that. The perfect NES experience isn't for everyone, but for those who can foot the bill, it's here.

In this article: analogue, analoguent, analougentmini, av, classicgaming, engadgetirl, famicom, famicomdisksystem, gaming, nes, nintendo, nostalgia, ntmini, retro, review, uk-reviews
All products recommended by Engadget are selected by our editorial team, independent of our parent company. Some of our stories include affiliate links. If you buy something through one of these links, we may earn an affiliate commission.