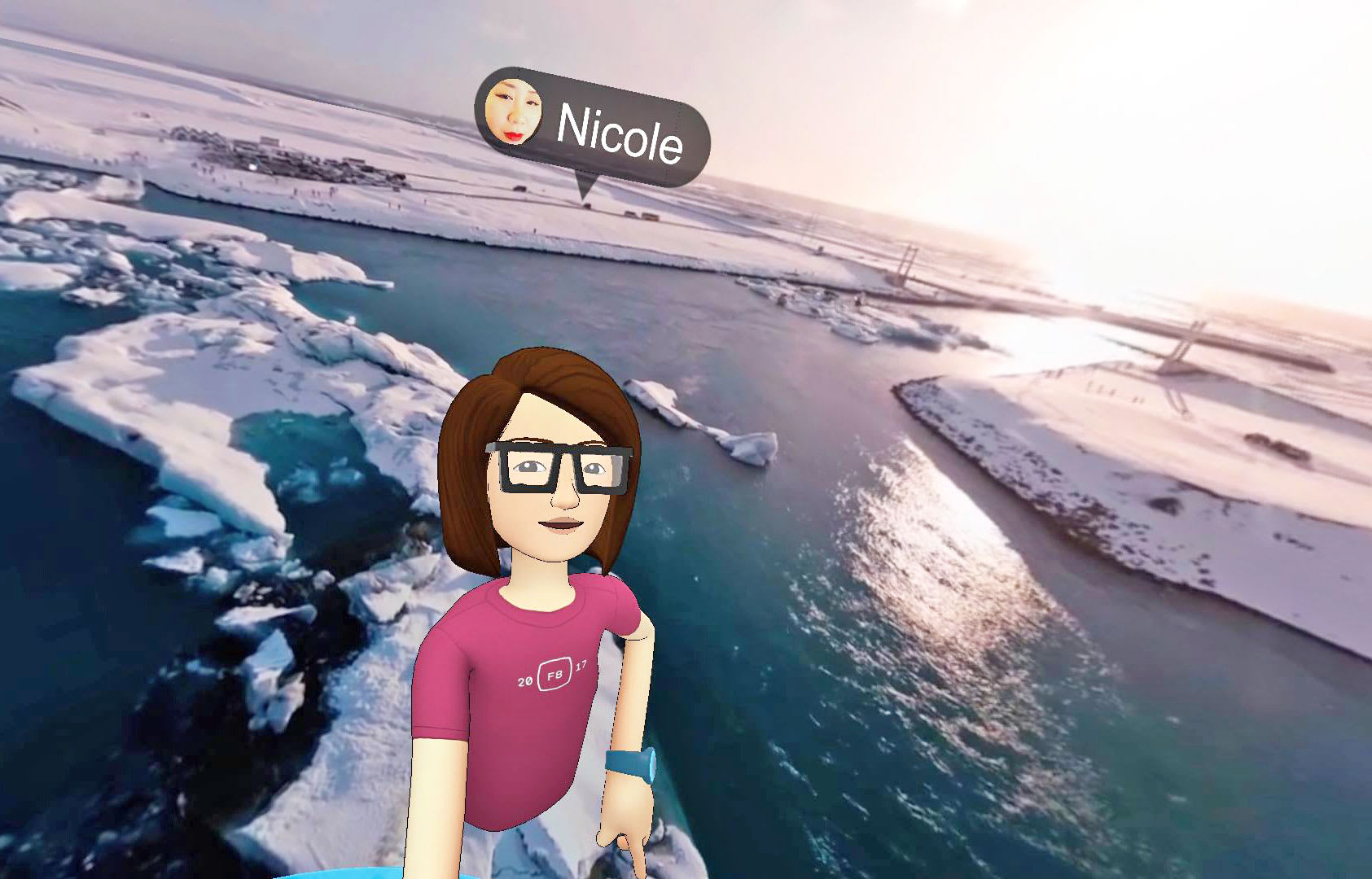 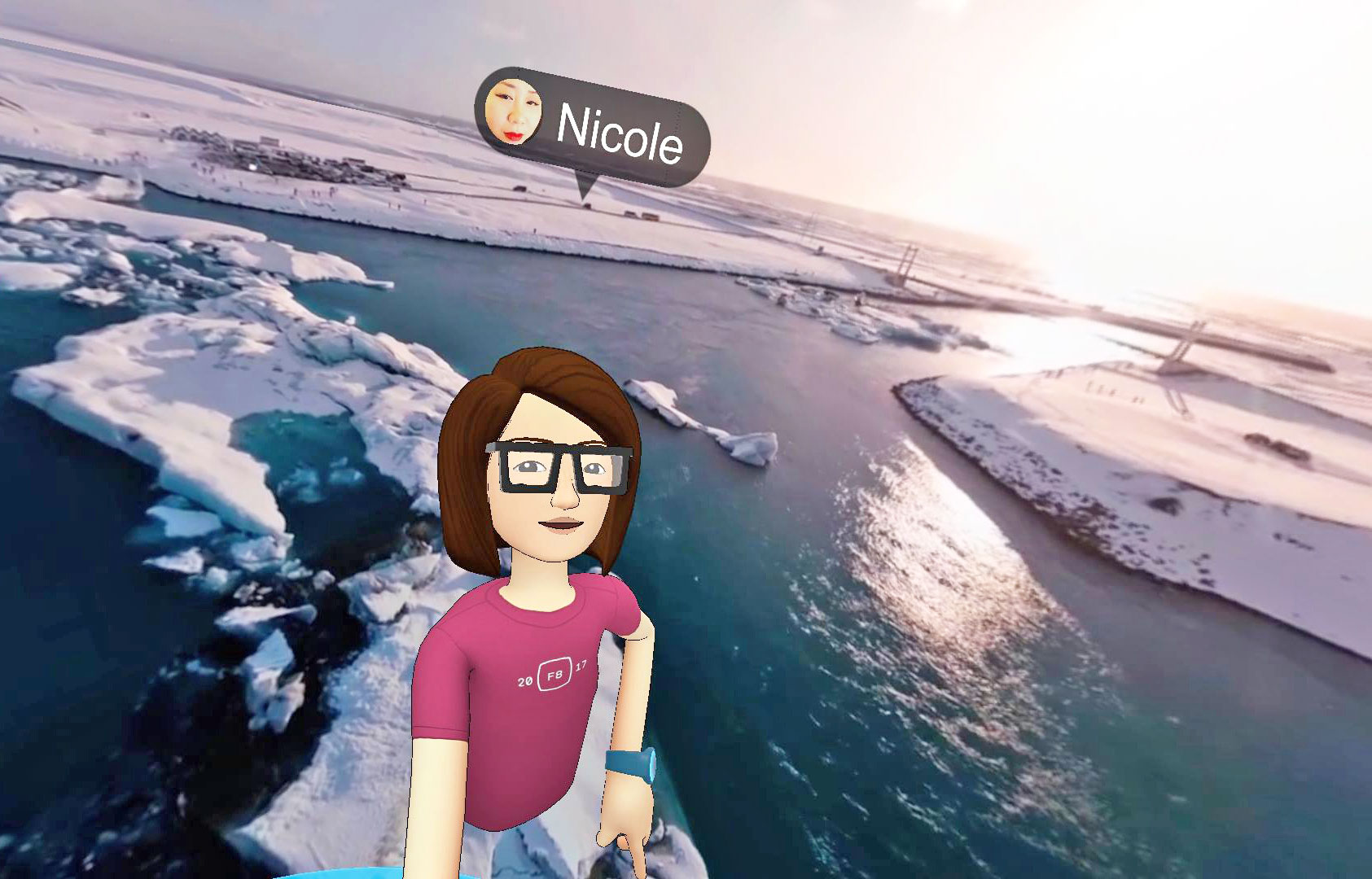 Three years ago, when Facebook bought Oculus for $2 billion, many scratched their heads in befuddlement. Social networks and virtual reality seem like such strange bedfellows; one is about connecting you to the world while the other appears to do the opposite. But CEO Mark Zuckerberg envisioned a world where VR would be a place for communication, not isolation. And many years later, that vision is much closer to reality. Facebook Spaces is the company's answer to social VR and it is, as I was amazed to find, surprisingly compelling.

I had the chance to try out Spaces for myself a few hours after it was announced at F8. As soon as I placed the Oculus Rift headset on my head and the Touch controllers in my hands, I was transported to what appeared like a beautiful park with cherry blossom trees. On my right was my virtual helper, Justin, who appeared in the form of an animated cartoon avatar. In front of me was a tableau of sorts, with a little dashboard.

Justin told me to select Appearance, and voila, I could customize the appearance of an animated cartoon avatar of myself. I could have designed one from scratch by customizing individual features like my nose or my hair, but I decided to have one automatically generated for me. I grabbed one of my profile photos, which were already on display, and Spaces was smart enough to translate it into a cartoon version of me. From there, I changed the color of my glasses and my shirt, which you can do in the Appearance tab too. 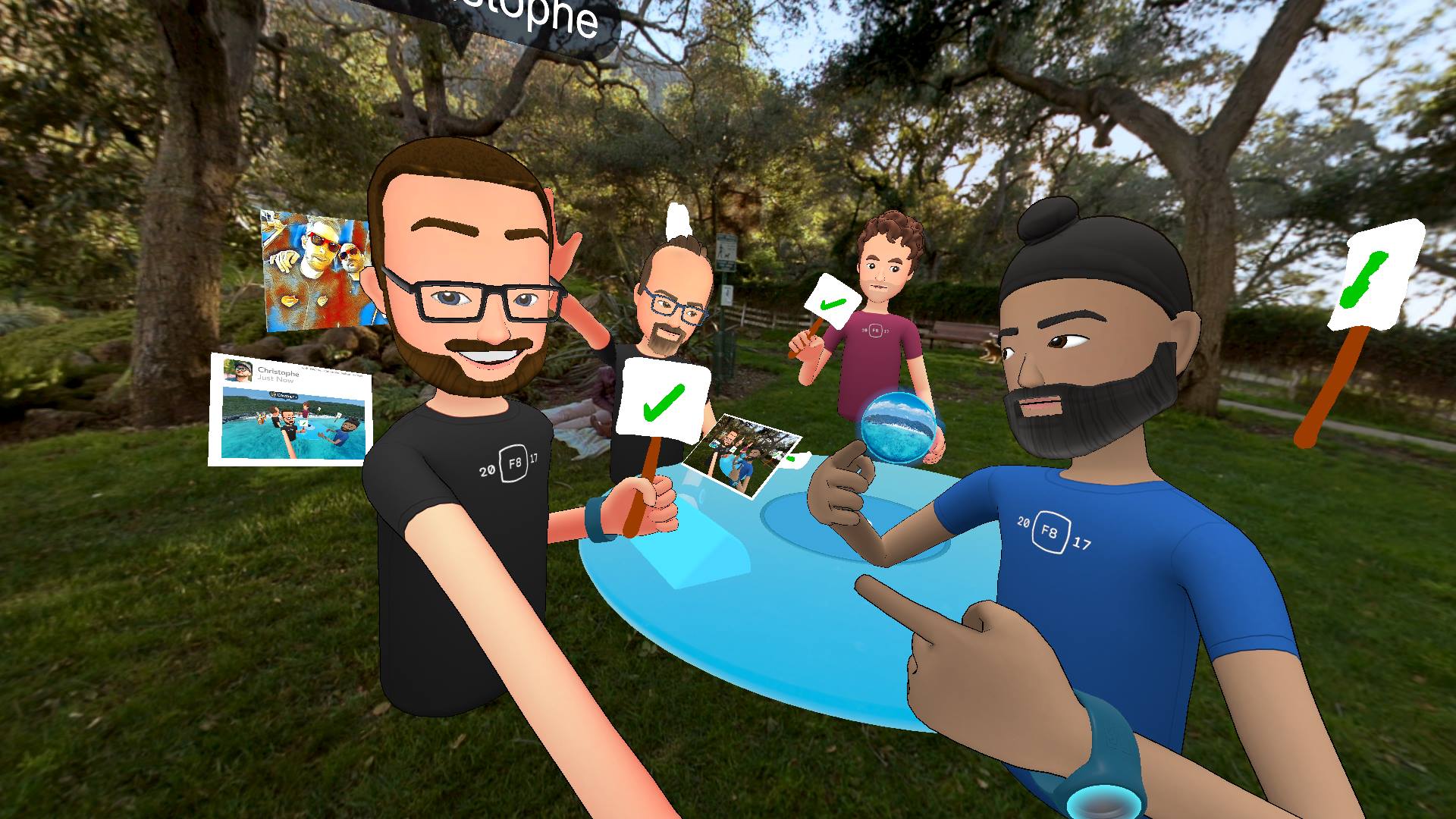 What I noticed almost immediately is how real it seemed, which is weird considering I was speaking to an animated avatar. Mike Booth, the product manager leading the Spaces development team, said that's because the Rift and the Touch create a little motion-capture studio. "You get your actual body language," he said. "It captures head movements, even hand gesticulation."

What's more, Spaces also infers what your eyes are looking at, creating what appears to be eye contact, which is integral to face-to-face communications. One of the reasons Spaces can do this so well is because these avatars are stylized and cartoonlike. "They're not hyperrealistic, where you can find every little flaw," said Booth.

The same goes with mouth movement. It actually listens to the voice coming through the Rift microphone and then tries to guess what mouth shapes you're making. It's not always accurate -- it sort of snaps the mouth around like a Wallace & Gromit cartoon -- but that's entirely on purpose. "We're not trying to be super photorealistic," said Booth. "We just want to show that you're talking." 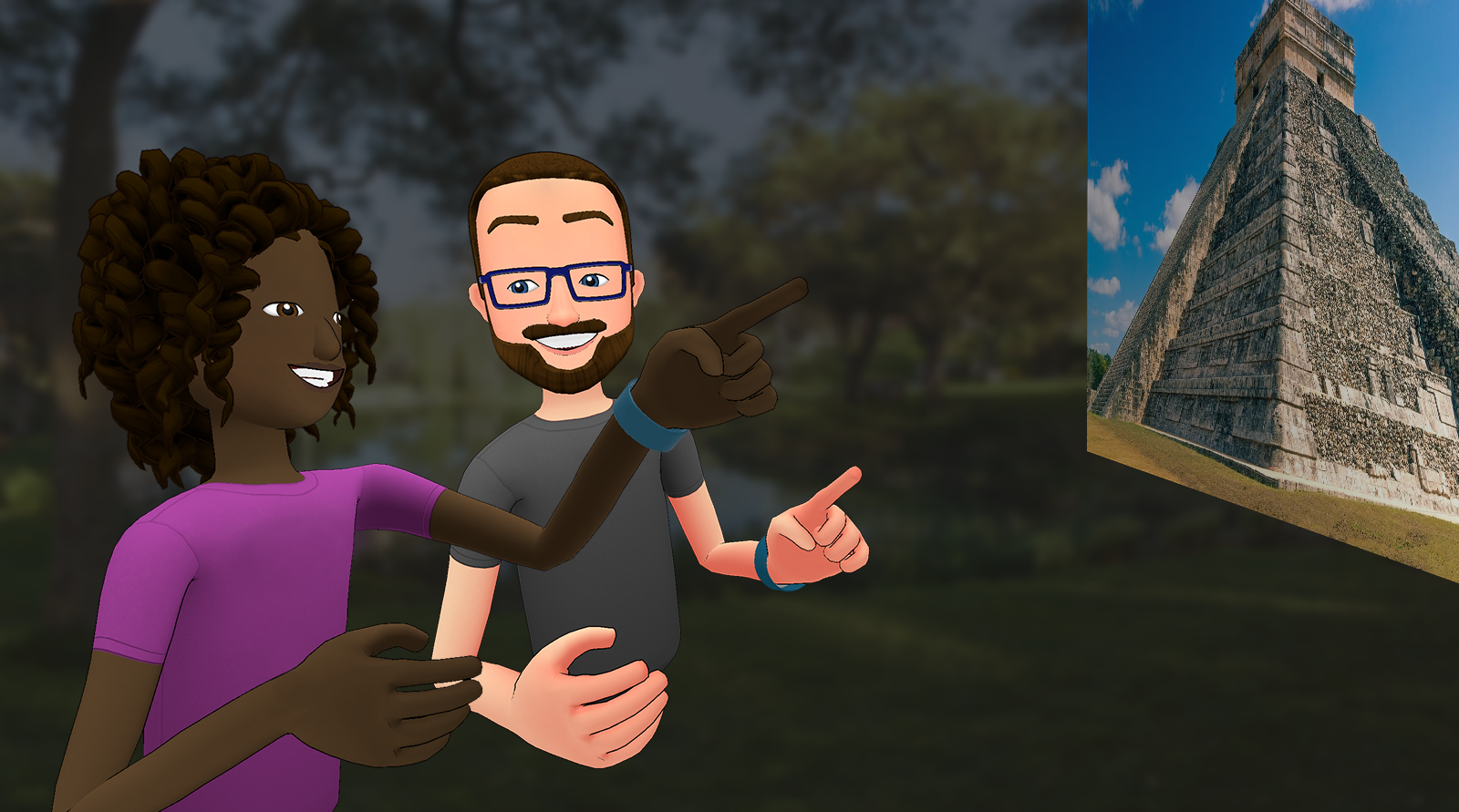 There are other fun things you can do with your avatar too. If you point both thumbsticks up, your avatar will laugh. Point them out and you'll smile. Place both controllers on your face and you'll make an "OH" face. Turn them outward and your avatar will shrug and look confused. Gestures are basically to VR as emojis are to text. "You have to invoke them," said Booth. "They're not supposed to be accidental."

Next, Justin showed me how to share different kinds of media. I could share photos and videos from my own album or from my Newsfeed, or I could share whatever I found interesting on the web. Once selected, I could resize them any way I wanted and have them displayed in the background. What's especially neat is that when you share 360-degree photos and videos, you can sort of throw them in the middle of the tableau and the image will completely envelop the world. It sounds silly perhaps, but when Justin shared a 360-degree video of a CNN documentary of Iceland, I almost felt like we were right there, taking a tour of the glaciers.

You also have the option of using a marker to draw silly doodles, turning them into three-dimensional art. You can toss them around, make duplicates of them or play silly games with them.

And of course, I couldn't not take a selfie. Yes, there's a virtual selfie stick, and yes, it works just as it sounds. Simply grab the selfie stick, frame the shot you want and snap the perfect shot. From there, you can share it with your friends like you can with any other photo. 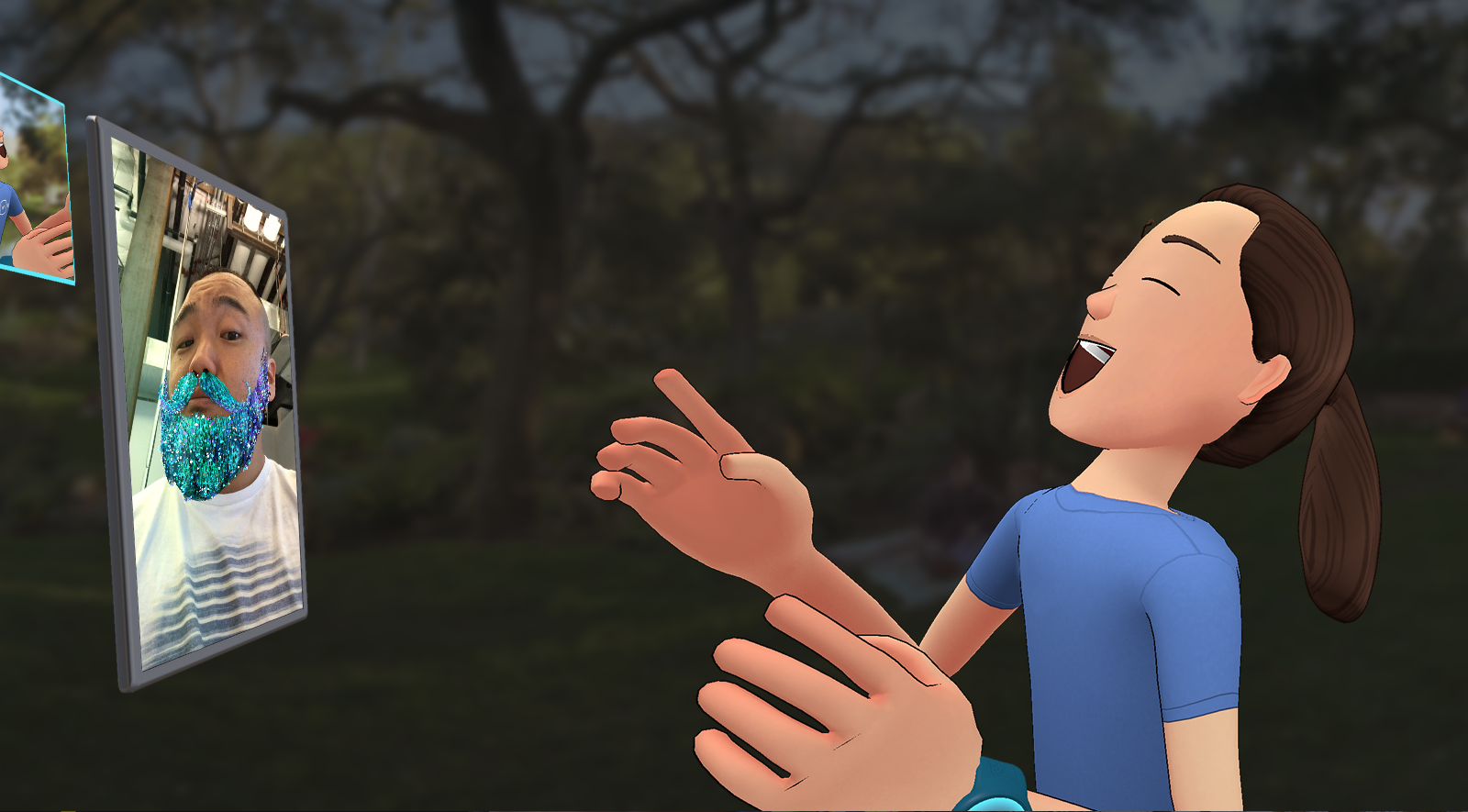 Last but not least, Spaces is also tied in with Messenger. So you can initiate video calls right when you're in VR. Your friend's video-chat screen will show up in a little floating square (no, she doesn't need a VR headset to participate), and only you can hear and see what she says -- none of your other VR buddies can eavesdrop in the conversation. They can still hear what you say, of course, but they can't hear what your Messenger friend says. Facebook tells me there's no way to enable that yet, but that functionality might come later in the future.

As cool as all of that is, though, what sold me the most on Spaces are those animated avatars. And they also happen to be one of the factors that was really hard for Facebook to get right. "The biggest challenge was how the avatars were going to look," said Booth. "You know the uncanny valley? Well the uncanny valley in VR is a lot wider. Anything that's attached to your head is going to have biological motions; it's going to seem alive." That means that anything that was too lifelike would look weird.

"Finding the right balance of charming and being human recognizably without being too realistic and creepy was harder than expected," said Booth. "One of our early experiments was to have the lips smoothly blend with the shapes, thinking it would be realistic. And it was just way too creepy." There were also some experiments on nonhuman avatars, like you'd see in Zootopia, but that was nixed as well. "Facebook is about authentic identity, which is fundamentally about humans." Still, that doesn't mean that costumes won't be an option later on. 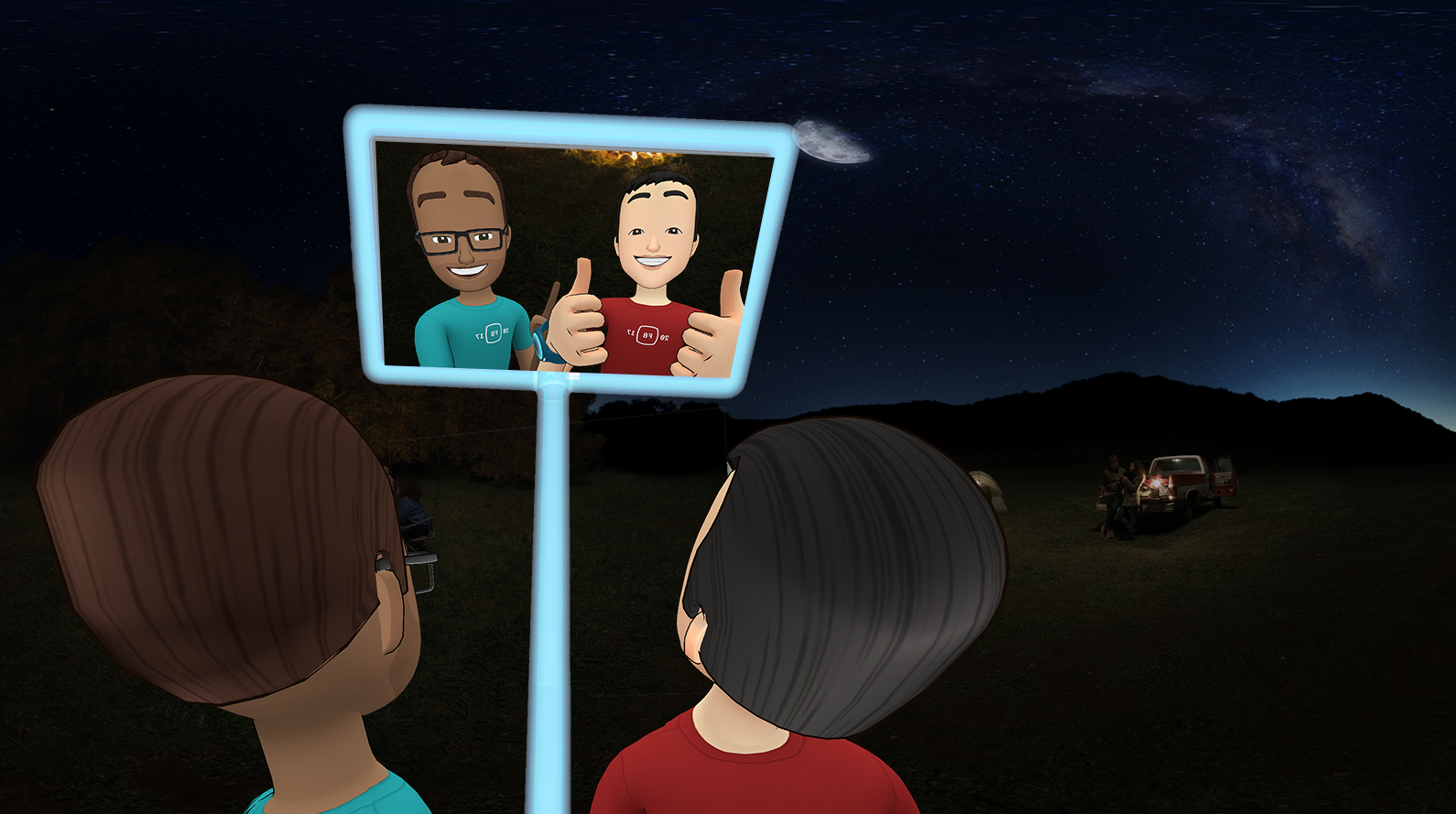 "The core of Spaces, the reason it exists, is so you can feel like you're in person with your friends," said Booth. "And then it's having interesting things you can do with your friends. It's not a chat room where you're just talking." Indeed, Facebook Spaces only allows up to four of your friends at a time, so it's more conducive to conversations and hanging out versus having a big party.

Of course, Facebook Spaces isn't the only social VR app out there. Oculus even has its own version, called Oculus Rooms. The difference between the two, Booth said, is that Oculus' version is made just for Oculus hardware to drive that particular platform. Facebook Spaces, on the other hand, is supposed to be much more widespread. That's why even though it's an Oculus exclusive right now, Booth wants it to be on all VR hardware. Yes, even the Vive.

When I asked what Booth would say to the skeptics of social VR, he said he doesn't quite know. But what he thinks will happen is that VR skeptics will finally be persuaded to use VR because of social. "There are people that are looking at VR, thinking, 'It's not for me,' because they think it's all about gaming," he said. "But what we're trying to build is for everyone.

"We want to bring you and your friends to VR," said Booth. "I hope it'll make more people look at VR as something that people will actually want."

In this article: f8, f82017, facebook, gear, internet, personal computing, personalcomputing
All products recommended by Engadget are selected by our editorial team, independent of our parent company. Some of our stories include affiliate links. If you buy something through one of these links, we may earn an affiliate commission.