Sony held an event in New York City today, where it unveiled its new flagship full-frame camera, the A9. This mirrorless shooter, which the company is pegging as a DSLR killer, is geared toward professional photographers -- especially those who shoot sports and other fast-paced environments. The A9 features a 24.2-megapixel 35mm sensor, a new Bionz X processor, an insane AF system with 693 phase detection points (93 percent frame coverage) and built-in 5 axis image stabilization. Given its target audience, the A9 is naturally all about speed, so you'll find a blackout-free, 20fps continuous shooting mode and 1/32,000 shutter speed. Sony says it is its fastest digital camera to date.

Video-wise, the A9 can shoot 4K (3,840 x 2,160) with full-frame capture and 1080p at up to 120fps, in case you're looking to record some slow-motion footage. The body itself resembles a number of Sony's latest Alpha shooters, such as the A7S II, A7R II and A7 II. Its looks are so similar to these that a few people at the launch event tried to snatch my A7 II thinking it was the A9. There are three physical dials on the top of the camera (exposure, scene and shooting mode), as well as two SD card slots and an Ethernet port. Meanwhile, Sony claims its new Z battery will last you for more than 500 shots. 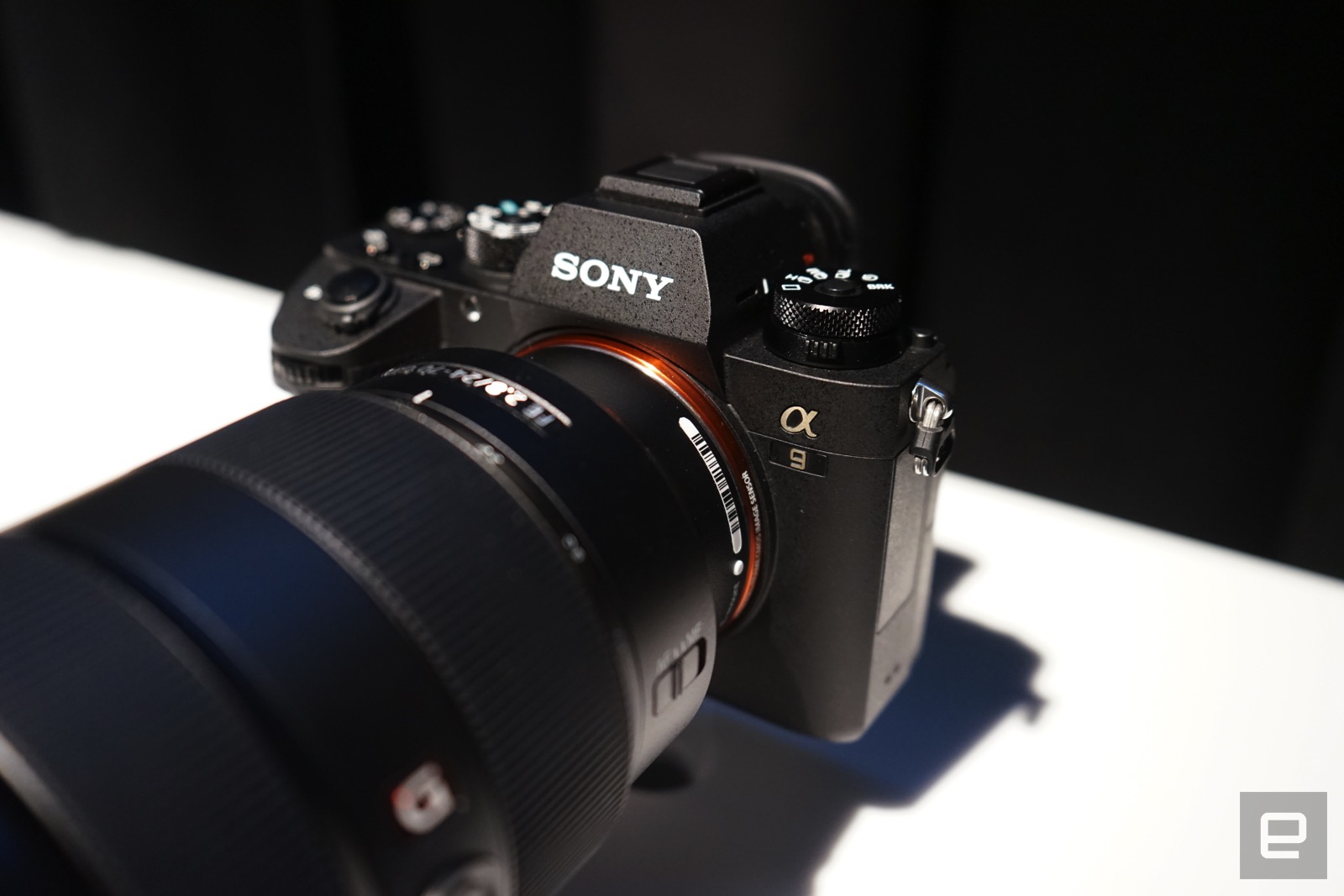 Sony says its new flagship full-frame is "half the size and weight" as the DSLRs it wants to dethrone, like Canon's 5D Mark IV or Nikon's D5. If you've ever held one of the other Alpha shooters mentioned above, you'll feel right at home with the A9's ergonomics. On that note, Sony revealed today that it is now the number two seller of full-frame interchangeable lens cameras in the US, thanks in large part to the A7S II and A7R II. With the A9, the company's hoping that this momentum continues.

Unfortunately, while Sony let us shoot briefly with the A9, we weren't allowed to use our own SD cards to see what the full-resolution images looked like. That said, stay tuned, as we'll be spending more time with the A9 before it hits stores May 25th for $4,500 (body-only). And if you want the new $2,500 G Master 100-400mm telephoto lens to go with that, you'll have to wait until that glass arrives in July.

13
In this article: a9, alphaa9, cameras, dslr, fullframe, gear, hands-on, mirrorless, mirrorlesscamera, sony, sonya9, sonyalpha, sonyalphaa9, video
All products recommended by Engadget are selected by our editorial team, independent of our parent company. Some of our stories include affiliate links. If you buy something through one of these links, we may earn an affiliate commission.