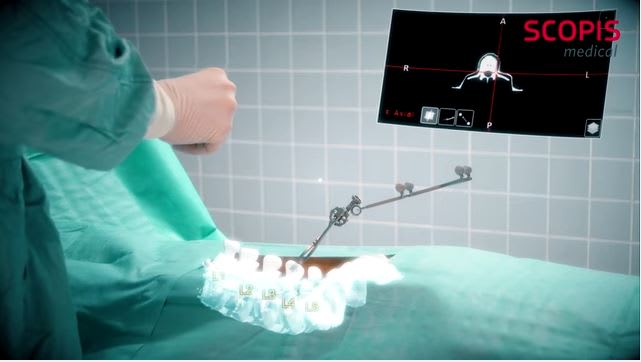 Since the HoloLens was introduced, Microsoft has pitched it as both a gaming peripheral and a practical assistant in the workplace. Professionals have already started using its augmented reality tech to help out, from building engineers donning it to visualize structural blueprints or Duke surgeons testing it during brain operations. Those were preliminary applications, but augmented reality software company Scopis has released a platform for HoloLens specifically to aid in spinal surgeries.

The Holographic Navigation Platform, as Scopis calls it, projects a mixed-reality overlay on the patient through the HoloLens during a surgical procedure. Surgeons can use it to track pedicle screws and use gestures to adjust virtual displays like a customizable HUD, keeping important numbers in their field-of-view.

Obviously, improving accuracy with Scopis' 3D-positioning tech would likely reduce surgery time and invasive depth. But using visual overlay technology would also cut down on the radiation exposure that comes with the current spine-envisioning method of fluoroscopy. As we noted in the Duke tests, wearing the wireless HoloLens headset is far less cumbersome than prior mixed reality setups. But a private company betting on Microsoft's AR system is another step toward integrating the tech into professional use.

Source: Business Wire
In this article: gadgetry, gadgets, gear, hololens, medicine, microsoft, MixedReality, surgery
All products recommended by Engadget are selected by our editorial team, independent of our parent company. Some of our stories include affiliate links. If you buy something through one of these links, we may earn an affiliate commission.