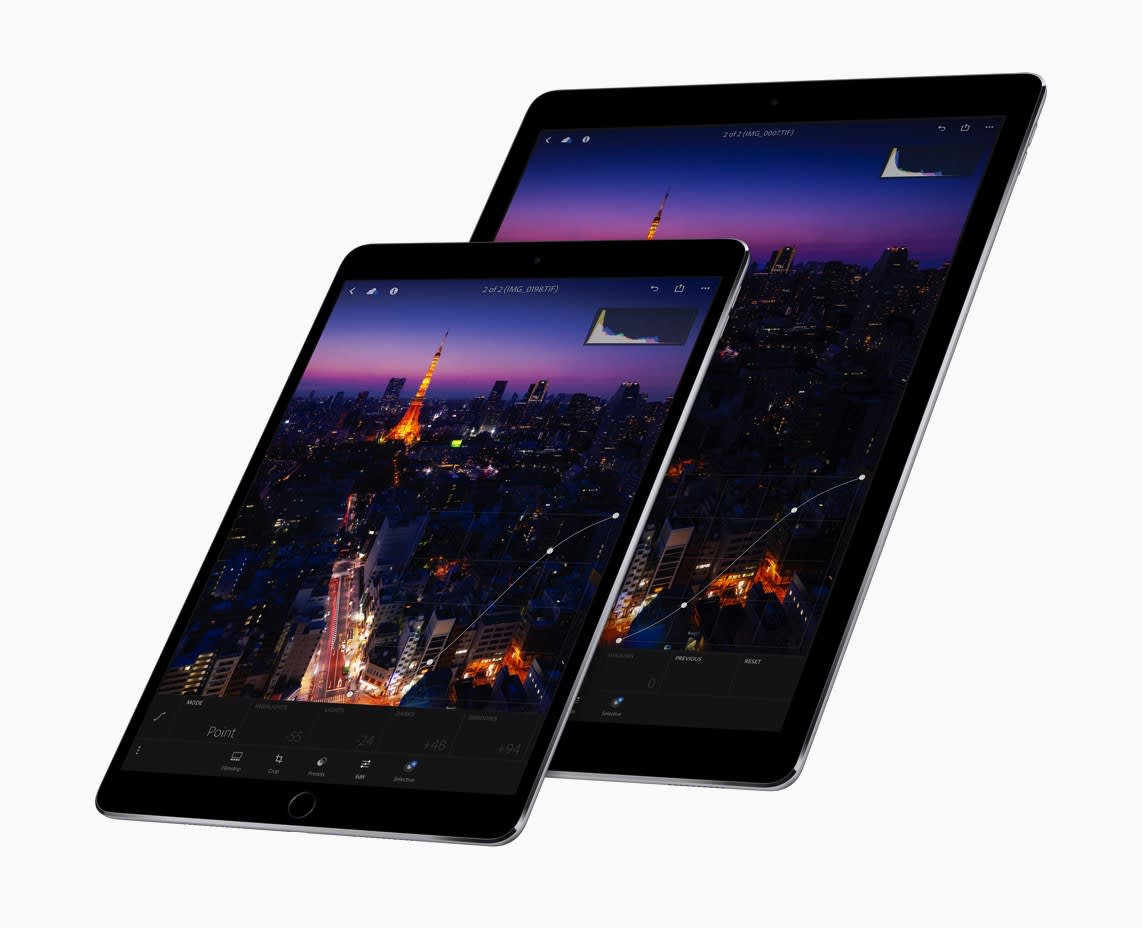 Apple's original 12.9-inch iPad Pro hit the scene in Nov. 2015. Its sheer size and high-end specs made it a standout of the tablet scene, while the Apple Pencil created to work with it made it a hit with designers and other creatives. Now, just a year after Apple introduced a smaller, still capable 9.7-inch iPad Pro with a more typical form factor, the company has replaced it with a new larger model with a 10.5-inch screen.

This new model -- which replaces the 9.7-inch iPad Pro -- has a display that's 20 percent larger than its predecessor. Apple squeezed a bigger frame into essentially the same space by reducing the bezels by 40 percent. Perhaps most importantly from a physical perspective is that the tablet still weighs in at just one pound.

The bigger screen also means Apple can call the onscreen keyboard full-size. Similarly, the Smart Keyboard accessory (still sold separately) is also full-size. For the first time too, there will be a Japanese-language keyboard.

Apple is not only introducing a new iPad Pro today but also refreshing the 12.9-inch model. Both iPads now feature the True Tone display Apple introduced last year, which adjusts color temperature on the fly depending on lighting conditions. Other display improvements include the wide P3 color gamut that's being found in more and more Apple products, a low-glare panel and 600-nit brightness.

Under the hood, the iPad Pro uses an A10X Fusion chip with a six-core CPU, which combines three high-performance cores and three high-efficiency ones. There's also a 12-core GPU on deck, which should translate to a 40 percent boost in graphics performance, according to Apple. There's a new 12-megapixel camera (and a 7MP FaceTime HD camera) with optical image stabilization and a high-speed sensor with a 1.8 aperture. The camera has a six-element lens, quad-LED True Tone Flash, wide color capture and 4K video capture.

The new iPad Pro models support fast charging and retain the 10-hour battery life Apple has long advertised with the iPad. Storage and pricing have been tweaked a bit as well. The entry models will start with 64GB of storage, twice the amount the entry line had previously. But the new 10.5-inch iPad Pro now costs $649, up $50 from last year's model. The 12.9-inch model still starts at $799, and spending an extra $100 in both cases will get you 256GB of storage. Finally, Apple has added 512GB models for the first time that cost a whopping $949 or $1,049, depending on your preferred screen size.

If that's not enough, iOS 11 has a plethora of new iPad-specific features -- but while the new hardware will be shipping next week, you'll have to wait until the fall to try the out the latest software.

Source: Apple
In this article: apple, applenews, gear, iPad, iPadPro, iPadPro10.2, mobile, personal computing, personalcomputing, Pro, wwdc2017
All products recommended by Engadget are selected by our editorial team, independent of our parent company. Some of our stories include affiliate links. If you buy something through one of these links, we may earn an affiliate commission.