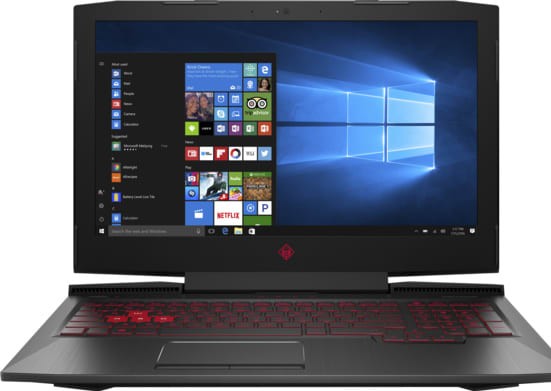 HP went big with its Omen gaming machines last year, giving us some major VoodooPC flashbacks in the process. Unfortunately, the laptops felt like a downgrade from the slick Omen gaming notebook that HP launched in 2014. This year, the company decided to turn things around. The new Omen 15 fixes everything wrong with the previous model, thanks to a more stylish design and VR headsets with enough graphics power. It doesn't stand out from the increasingly crowded gaming laptop market, but it at least allows HP to stay in the fight. The HP Omen 15 is everything we wanted from the company’s gaming line. It looks great, is fast enough to handle most games in 1080p, and it can finally support VR (with a graphics upgrade). While we would have liked to see a bit more graphical oomph to run games decently in 4K, the Omen 15 should satisfy most gamers.

Be the first to review the Omen 15 (2017)?
Your ratings help us make the buyer’s guide better for everyone.
Write a review

The last Omen notebook tried to downplay its gaming sensibility with a somewhat boring aesthetic. Perhaps that was in an effort to make it appeal to a broader audience, but it's not the sort of thing most gamers are looking for. The new Omen 15 has a more aggressive, "fighter jet" design that emphasizes sharp lines and angles instead of friendlier rounded corners. You can tell it's a gaming machine just by looking at it, which should make it more tempting to people who view their rigs like hot rods.

The Omen 15's case is still made of plastic -- not machined aluminum like the gorgeous 2014 model -- but it's mostly sturdy. The aesthetic is all black and crimson, with a touch of faux carbon fiber for good measure. It's an elegant design overall, but I'm not sure how well it would hold up over time. I managed to somehow scratch the top of the case in the midst of this review, and I honestly have no idea how that happened. There's a bit of flex behind the Omen logo and the display as well, which makes me wonder how safe it would be if I were to stuff it into a laptop bag. 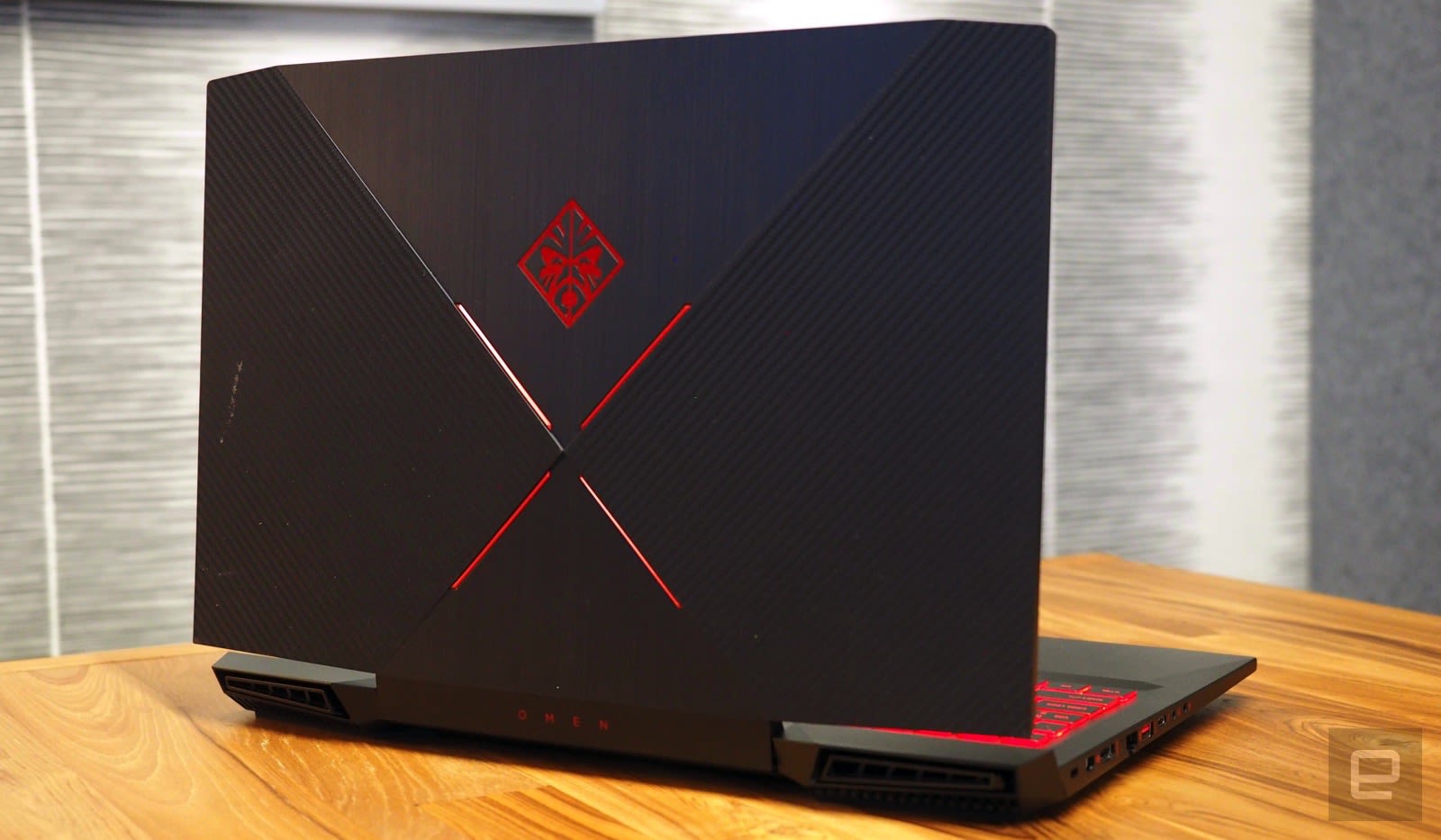 At 5.68 pounds, it's on the lighter end for a full-fledged gaming laptop. You definitely won't mistake the Omen 15 for an ultraportable, but it's easy to carry around. Additionally, HP applied NVIDIA's Max-Q design philosophy, which is one reason why it's so portable. The Omen 15 doesn't take Max-Q as far as ASUS' Zephyrus laptop, though, which comes in under five pounds and packs in more-powerful hardware.

As for ports, the Omen 15 includes three USB 3.0 connections, a USB-C socket with optional Thunderbolt connectivity, an SD card reader and an Ethernet jack. It also has full-size HDMI and Mini DisplayPort connections for video output. If you want to upgrade later on, you can also remove the bottom of the laptop to swap out its SSD, hard drive and RAM -- in theory, at least, since some of the tiny screws wouldn't budge when I tried to open the case. Even worse, they ended up getting stripped, which means a Phillips-head screwdriver can't grip them anymore. 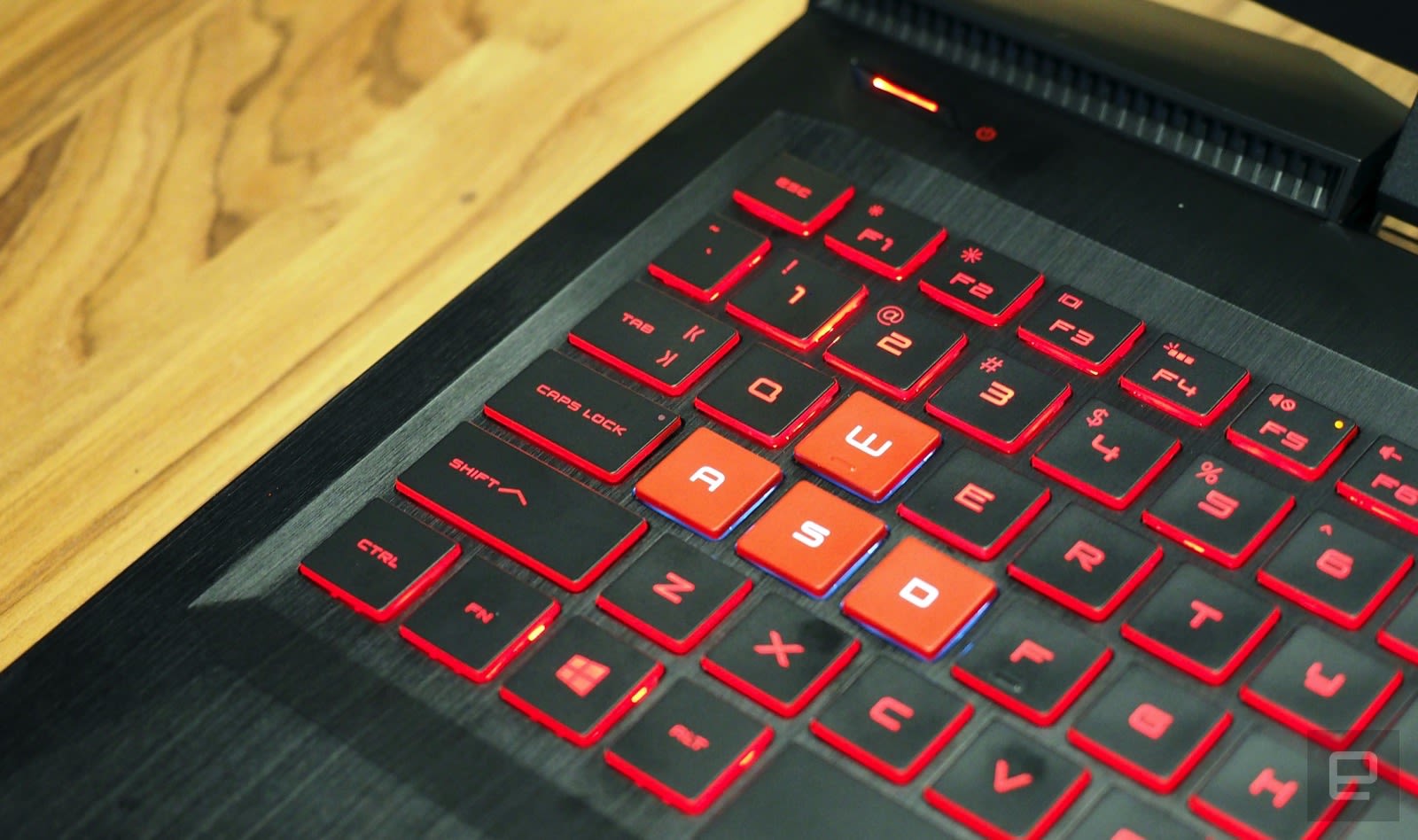 To give the laptop more of a premium feel, HP draped a layer of aluminum around the keyboard and trackpad, both of which are also significantly improved over last year's. The keyboard feels great to type on, with a decent amount of travel. And it's also very responsive for games: I felt just as capable maneuvering through Overwatch matches as I do on my desktop keyboard.

Sure, it's not mechanical, but you have to step up to far more expensive gaming laptops for that (e.g., HP's huge Omen X). There's a full number pad on the right side of the keyboard, as well as a crimson backlight for when you're gaming in the dark. HP claims it offers "26-key rollover anti-ghosting," which means it can accept that many key commands at once without mistaking any inputs. That's particularly useful for fast typists and gamers who need to hit plenty of keys often.

The Omen 15's touchpad is smooth and accurate for all of your productivity needs, and its two buttons are also very responsive. While you'll still need a decent mouse for playing most games, I particularly appreciated the touchpad. Plenty of Windows machines tend to skimp on them, especially gaming laptops. 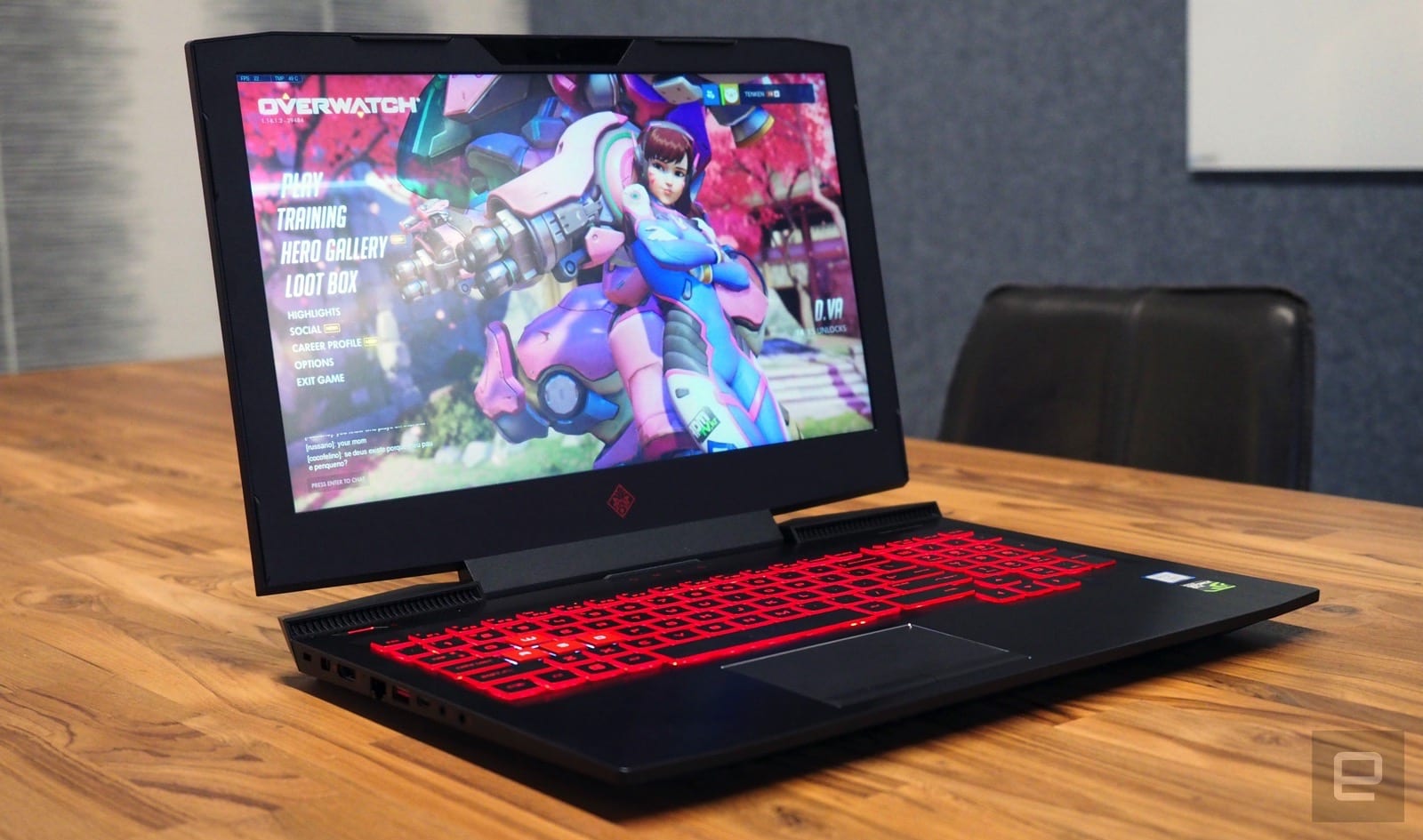 The Omen 15's 15.6-inch display is available in in 4K or 1080p with a fast 120Hz refresh rate. You can also choose from G-Sync-compatible screens for NVIDIA GPUs and Freesync displays for AMD chips. I tested the 4K G-Sync version, which was bright, colorful and responsive enough for fast-paced games. The screen was also great for movies and TV shows, but that's a less notable achievement.

I didn't see much point in having such a high resolution, though, since the Omen isn't powerful enough to play games well in 4K. Most gamers would be better off with the 1080p screen, since its speedy refresh rate would let you see up to 120 frames per second. That adds up to a much smoother gaming experience overall.

The Omen 15's speakers were also impressive, delivering a surprising amount of volume and detail for laptop speakers. Since they sit toward the front of the laptop, it's almost as if the sound is coming toward you, which makes for much more natural-sounding audio. Obviously, they're no match for a decent set of gaming headphones or external speakers, but it's nice to have some solid built-in sound.

The Omen 15 is powered by Intel's i7-7700HQ CPU and your choice of NVIDIA's GTX 1050, 1050Ti or 1060 graphics cards. The lowest-end model features AMD's Radeon RX550 GPU, if you're aiming to save a few bucks. The laptop also packs in between 8GB and 16GB of RAM, and you can choose among a variety of SSD options and larger 2.5-inch hard drives for storing all of your games.

Overall, it has much more horsepower than last year's Omen. If you want to dabble in VR, though, you'll have to step up to the GTX 1060 version to run the Oculus Rift or HTC Vive. While every Omen 15 model has enough USB ports to support those headsets and their accompanying sensors, you need the extra bit of power from the GTX 1060 to make sure your games run smoothly. VR isn't like typical gaming: A few dropped frames could easily make you sick.

Even though it's not nearly as beefy as the ASUS Zephyrus, the Omen 15 still offers enough power to reach a solid 60 FPS in most modern games running at 1080p. I clocked in at around 120 FPS in Overwatch on high graphical settings and between 60 and 70 FPS in The Witcher 3 and Hellblade: Senua's Sacrifice. Thanks to the G-Sync screen, I also didn't notice any screen tearing once the frame rate started creeping up.

As I mentioned before, the Omen 15 isn't ideal for 4K gaming. The Witcher 3 ran at just 20 FPS at that resolution with medium graphics settings. Unfortunately, the Omen's monitor doesn't support 1,440p (2,560 by 1,440 pixels), which is my ideal gaming resolution between 1080p and 4K. Honestly, though, with a display this size it'd be tough to tell the difference between that and 1080p. The important thing about the Omen 15? Everything I threw at it looked and played great, as long as I stuck with 1080p.

HP also did a great job of minimizing heat. The Omen's GPU reached around 72C at full load in my air-conditioned office while the CPU hovered around 80C. I wouldn't recommend putting it on your lap while you're gaming, but the Omen never got too hot to touch either. Partially, the sensible temperatures are due to a more efficient fan design, which HP claims pushes around 20 percent more airflow at full speed.

The company also implemented the Max Q version of NVIDIA's GTX 1060, which is clocked a bit slower than the standard model. But because of that, it's also a more power-efficient GPU. The GTX 1060 version of the Omen 15 fits in three heat pipes, compared to two from last year's model. When playing a demanding game, the laptop can get noticeably loud, but that's not a huge issue if you're wearing headphones.

Unfortunately, the Omen is a disappointment when it comes to battery life. In our test, which involves looping an HD video, it lasted only two and a half hours with battery-saving settings turned off. That puts it 40 minutes ahead of the ASUS Zephyrus, but you wouldn't want to do any gaming on either machine without being plugged in. Still, it's more useful for short bursts of productivity work on battery than the ASUS machine. 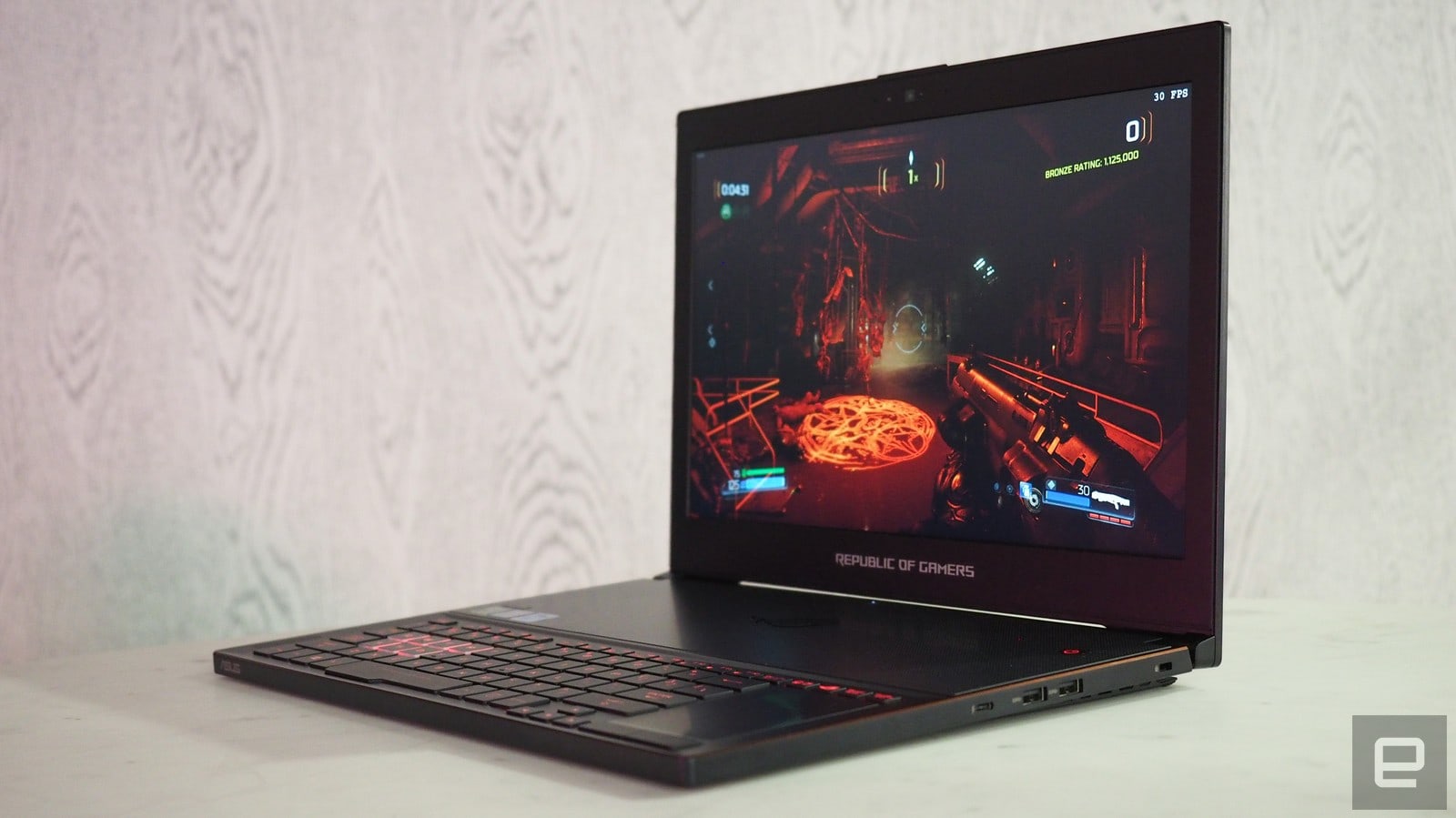 Mostly, HP is targeting Dell's Alienware 15 lineup, which begins at $1,200. Those machines weigh a few pounds more and don't have the benefit of Max-Q design, but they also have room to fit in more-powerful GPUs like NVIDIA's GTX 1070 and 1080. There's also Dell's Inspiron 7000, which starts at $1,000 but has a much more subdued design.

If money is no object and you want to see just how far NVIDIA's Max Q design philosophy can go, check out ASUS' ROG Zephyrus. Be prepared to shell out at least $2,300 for the privilege of having the thinnest gaming laptop around. 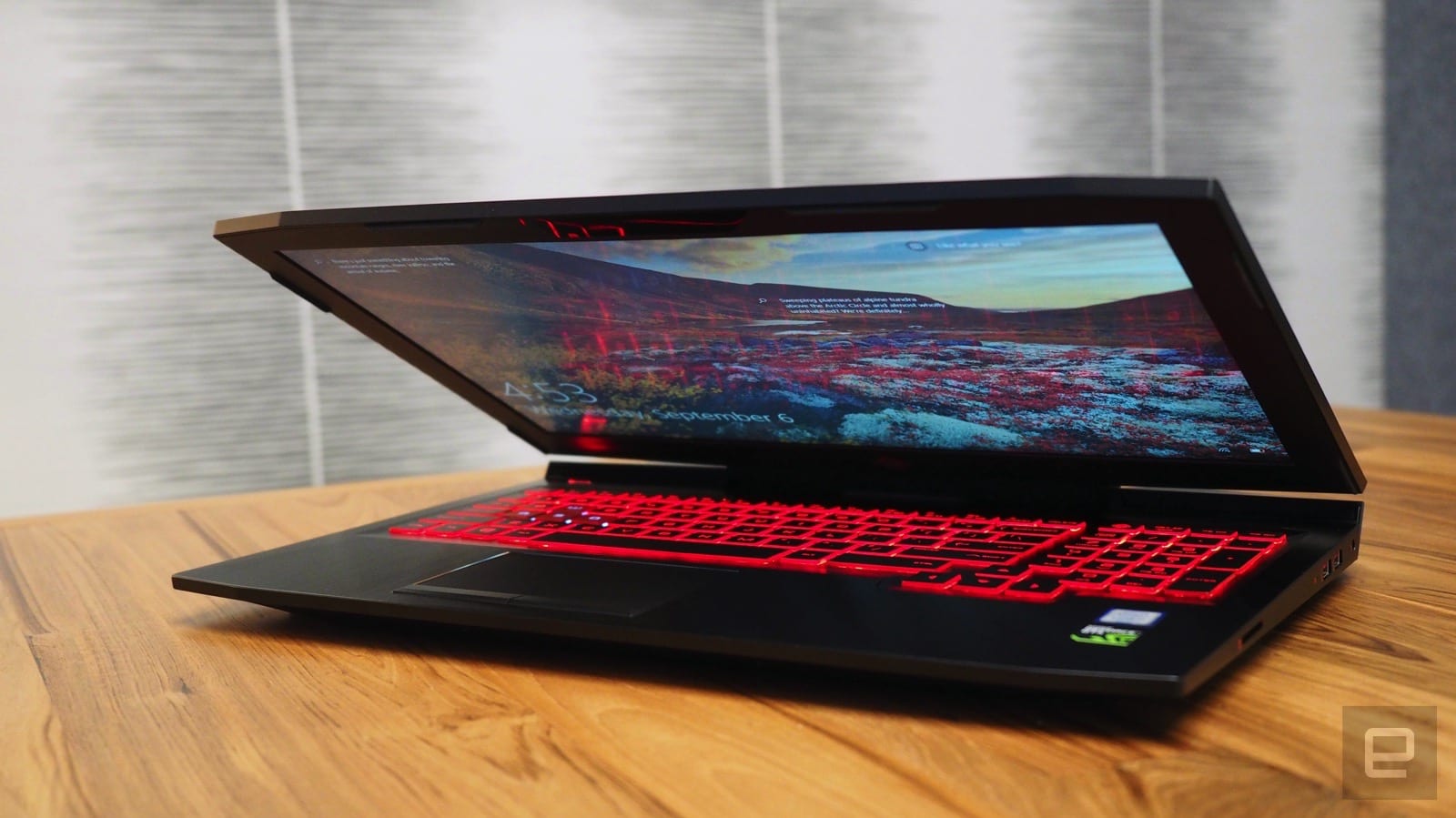 The best thing about the Omen 15? It's clear that HP learned from its mistakes. This year's model looks great, offers more power and actually has a good keyboard and trackpad. While hard-core gamers might want to hold out for the even more powerful Omen X, the Omen 15 should satisfy everyone else.

In this article: gadgetry, gadgets, gaming, gaminglaptops, gear, hp, Omen, Omen15, personal computing, personalcomputing, review
All products recommended by Engadget are selected by our editorial team, independent of our parent company. Some of our stories include affiliate links. If you buy something through one of these links, we may earn an affiliate commission.