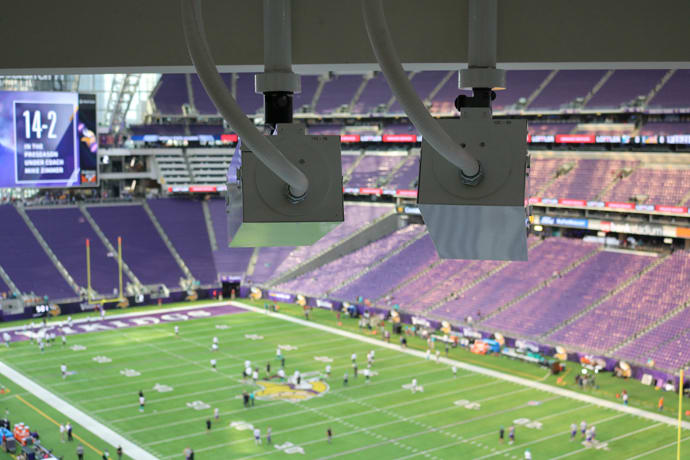 Intel's 360-degree replay system is already in place for Major League Baseball and has been available for the National Football League in Baltimore, Houston and San Francisco for some time. The technology company has just announced that it will expand what it calls freeD technology to another eight teams in the NFL, including the Cardinals, Panthers, Browns, Colts, Chiefs, Vikings, Patriots and Redskins. This brings the total to 11 NFL stadiums equipped with the system.

Intel acquired Replay Technologies a little over a year ago, and has since used its freeD technology to capture volumetric shots of the action for MLB and NFL games. The tech consists of 38 5K ultra-high definition cameras placed around each stadium to capture the recordings. The data is sent via fiber-optic cables to Intel servers in the stadium that can process up to one terabyte of data for each 15- to 30-second highlight clip. The video is then sent to an on-site production team that virtually recreates the clip in 3D. It's then available for fans to access the highlights at NFL.com, the NFL mobile app and the NFL YouTube channel.

"By expanding freeD to more teams across the NFL, we're empowering fans to see every side of the play and relive the excitement of game-changing moments," said Intel's James Carwana in a statement. "During Super Bowl LI, fans experienced a pivotal play from the quarterback's point of view. Seeing key plays up close and from new perspectives is redefining what it means to watch the game."

Source: Intel
In this article: 5K, av, cameras, entertainment, football, freed, intel, national football league, nfl, video
All products recommended by Engadget are selected by our editorial team, independent of our parent company. Some of our stories include affiliate links. If you buy something through one of these links, we may earn an affiliate commission.