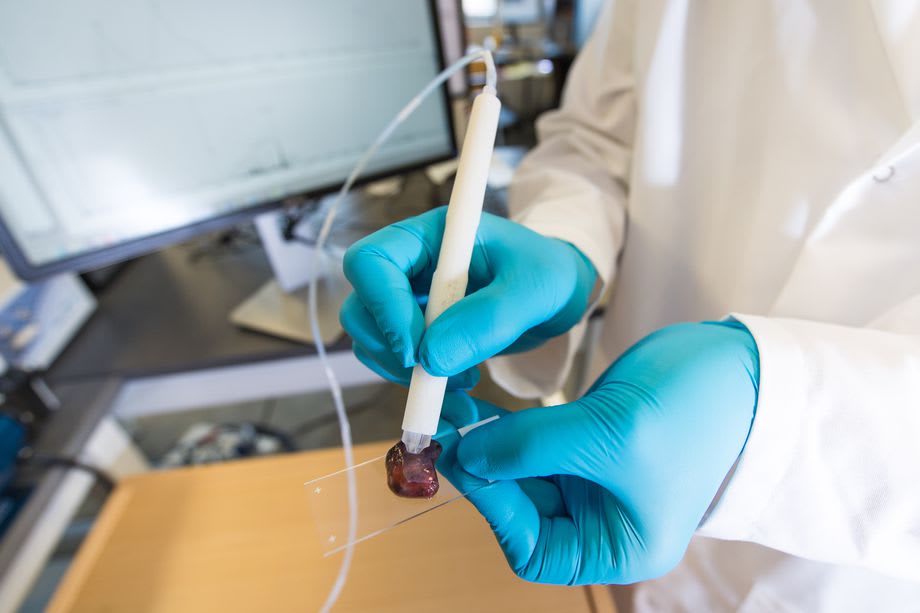 When surgeons are removing a tumor from a patient, determining whether they have taken out all of the cancerous cells or if they should extract more tissue is a problem they all face. Typically, the margins of a tumor are assessed after the surgery is completed and if it looks like some cancer was left behind, another surgery might be in order. So, developing a way to test tissue for cancerous cells in real-time would be incredibly useful for both surgeons and patients. In a study published this week in Science Translational Medicine, researchers present a device that does just that.

The MasSpec Pen, is, as its name suggests, a small, pen-like device that can determine whether tissue is cancerous in just 10 seconds. It works by delivering a droplet of water to the surface of the tissue in question. That droplet pulls in molecules from the tissue that are then analyzed by a mass spectrometer -- a machine that can rapidly measure the mass of chemicals -- and then the system reports whether the tissue is cancerous or normal. With that information, doctors can then decide whether they need to keep removing tissue or if they've already taken out all of the cancerous cells.

The researchers tested the MasSpec Pen on 253 human tissue samples and found that it was accurate over 96 percent of the time. They're now working on pens that can analyze smaller sections of tissue. The team does acknowledge that mass spectrometers are rather large and expensive and to make the MasSpec Pen as useful as possible, smaller and less expensive versions will be needed.

Others have developed different methods for analyzing cancerous tissue in real-time including a scalpel that can differentiate between cancerous and normal brain tissue, fluorescence-assisted imaging systems and recently, a microscope. But there's still a demand for these types of products in the surgery room and the MasSpec Pen is promising and very accurate. The researchers are working towards trialing the device during operations next year.

Via: BBC
Source: Science Translational Medicine
In this article: cancer, gadgetry, gadgets, gear, MassSpectrometer, medicine, research, surgery, tumor, video
All products recommended by Engadget are selected by our editorial team, independent of our parent company. Some of our stories include affiliate links. If you buy something through one of these links, we may earn an affiliate commission.