Iconic CES devices like the Apple Newton, CD player, VHS VCR, Sony PlayStation and Oculus Rift "Crystal Cove" didn't necessarily seem groundbreaking at the time. Experts and the public often gave prizes to gadgets like the Creative Zen Vision:M and Hitachi's G1000 Pocket PC that we've since deleted from our collective memory banks. With that in mind, here are 10 of the most memorable CES shows that yielded products that were instant hits as well as some that weren't appreciated until later. CES started in 1967, but it was a sleepy affair until 1970, when Philips unveiled its N1500 videocassette recorder. Until that point, VCRs cost upward of $50,000 and were used mainly by TV stations, but the Philips model with a built-in tuner was just $900 (around $5,000 today). It became the first-ever home VCR, letting folks who could afford it record TV shows for future viewing.

CES 1979: Atari and the home-gaming revolution

For many years, CES products were mostly hi-fi systems, VCRs, TV sets, portable radios, portable TV sets and ... well, you get the idea. In 1975, however, Atari introduced the Pong console, kicking off a home-gaming revolution. That culminated at the end of the decade with Atari's 400 and 800 personal computers (with 4KB and 8KB of RAM, respectively), launched at CES in 1979 for $550 and $1,000, respectively. They weren't the first personal computers (those would be the Apple II, Commodore PET and TRS-80), but they were the first with custom coprocessors that enabled superior sound and gaming capabilities. With iconic titles like Star Raiders, the Atari units were the first real gaming PCs and paved the way for the Commodore 64, a massive hit in the 1980s. 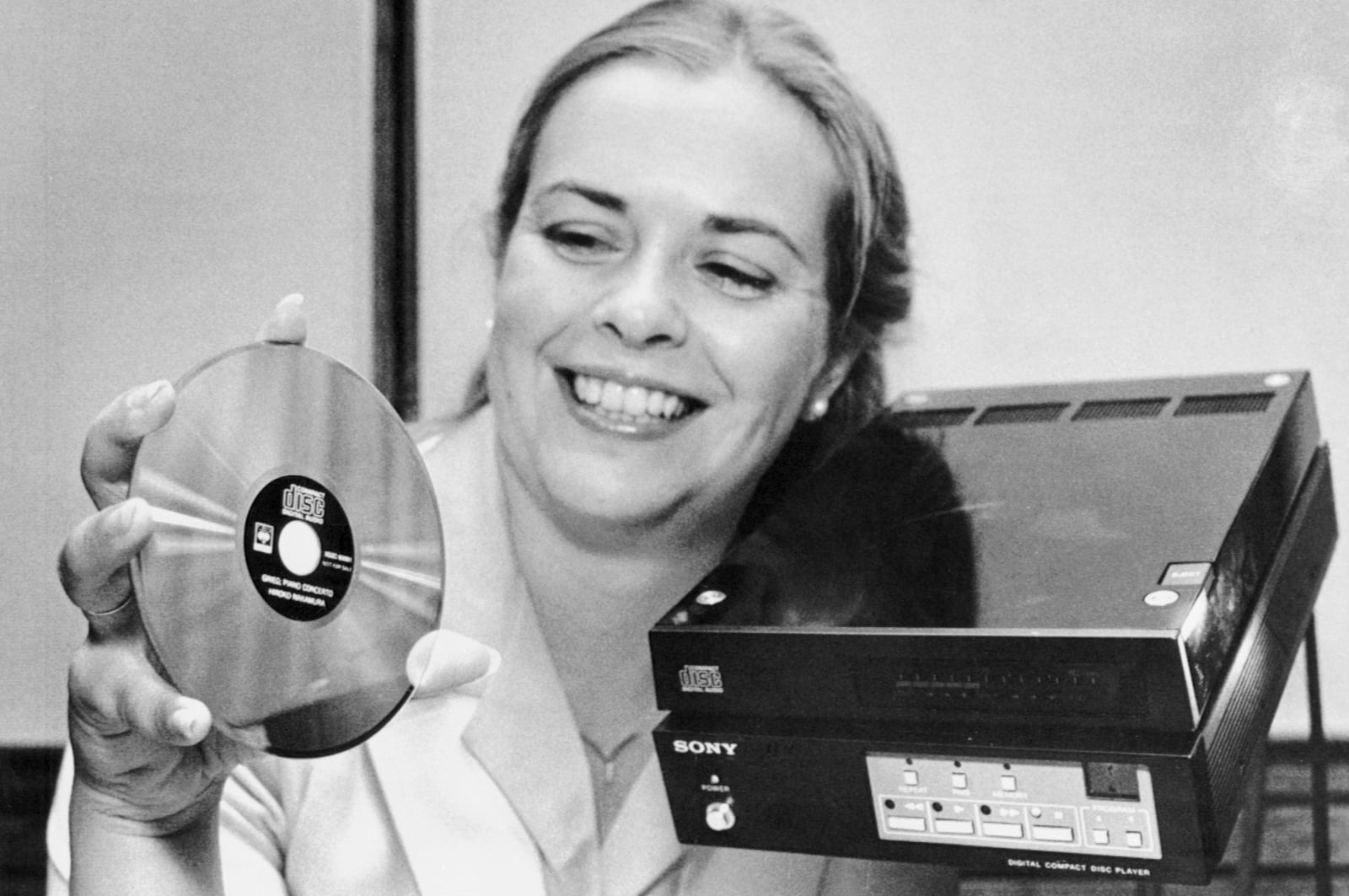 The compact disc was pretty damn impressive tech for 1981. Hard disks had only just arrived in a 5.25-inch size with a mere 5MB of capacity, but CDs could hold around 650MB. In the early days, though, the medium was intended as a purely audio format. Sony's CD player garnered a lot of buzz at CES, as it was claimed to offer more fidelity than vinyl while letting you skip from track to track with no delay or flipping.

CES 1984 marked the arrival of the Commodore Amiga, and by then, the gaming market was oversaturated. Between 1983 and 1985, it crashed, and a $3.2 billion industry was now valued at just $100 million. With that as the morbid background, Nintendo launched the Nintendo Entertainment System (NES), known in Japan as the Famicom, at CES 1985. Consumers lost confidence in the gaming industry because of over-the-top marketing claims and a lack of games, despite a glut of home consoles. To help with that, Nintendo pioneered third-party developer licensing, taking the pressure off itself to create new titles. It also delivered titles that closely matched what it advertised so that consumers wouldn't be disappointed.

After running tests in limited markets, the Japanese company released the NES with no less than 17 games, including Super Mario Bros., Hogan's Alley, Duck Hunt and Wrecking Crew. Nintendo went on to sell an incredible 7 million NES consoles in 1988, but it wasn't clear at all to CES 1985 attendees that it would be such a whopping success.

"Only a few US print sources at the time bothered to mention Nintendo's booth, usually quite briefly, with few images available," said user Brain Breaker on NintendoAge. That's pretty shocking considering how amazingly sharp and modern Nintendo's red-and-black CES booth looked for the time. Rather, folks (again) were more obsessed by hi-fi (including reel-to-reel and CDs), VHS and TVs, both big and small, judging by this video. 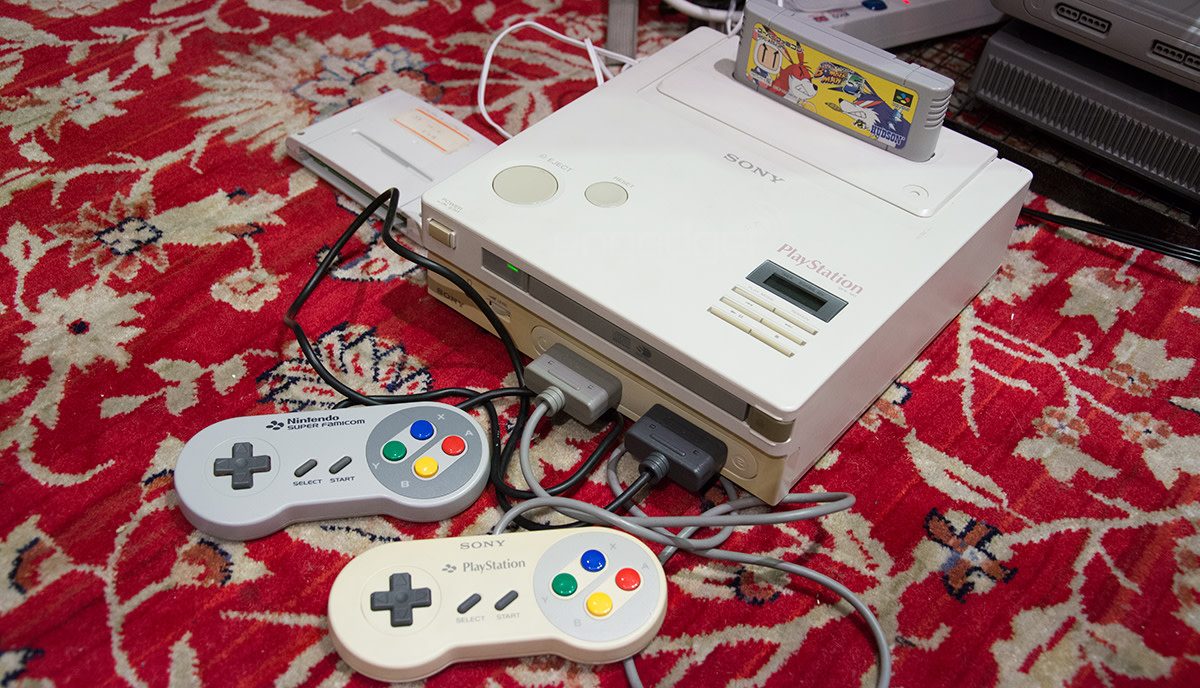 The Nintendo PlayStation that never was.

There was probably a lot of cool stuff at CES 1991, but it'll forever be remembered for the public implosion of Sony and Nintendo's fledgling partnership. The two were working on a console called the PlayStation that would let users play Nintendo games via cartridges and Sony interactive content on Sony's new data CD (Super Disc) technology.

Sony unveiled the partnership at CES, but Nintendo announced the next day that it was actually working with one of Sony's rivals, Philips. Nintendo had switched course because of unfavorable royalty agreements for CDs and patents on a key chip.

In the end, Sony took revenge by developing its own 32-bit console, the PlayStation. It unveiled that at E3 in 1995, with CEO Olaf Olafsson famously bringing executive Steve Race to come on and say just one thing: "299" (the price in dollars). The only remnants of the partnership now are a few rare Nintendo PlayStation consoles, one of which Engadget saw back in 2015.

Apple was never a big presence at CES, but in 1992 and 1993 it had a product it wanted to pitch to the public: the Apple Newton. PDAs were all the rage, with products appearing from Tandy and others, but the handwriting-recognition-enabled Newton MessagePad was the most highly anticipated of them all.

As it happened, John Sculley (barely) showed an alpha Newton device during his CES 1993 keynote, and that year marked its last official showing at CES. The handwriting recognition was pretty terrible, and low sales ended Sculley's career at Apple. The device itself was killed by Steve Jobs in 1997. The Newton is still iconic, though, in part because it's an Apple device and in part because it paved the way for the PalmPilot and even today's stylus-enabled tablets and PCs.

The year 1993 also marked a turning point for CES. For the first time, much of the show revolved around PCs, games and information tech rather than just TVs and stereos. IBM showed off a 16-inch color LCD monitor, the largest at the time, for instance. "It's really not far-fetched to imagine an active-matrix video wall in our offices, our homes and our child's offices in the very near future," said a smart-cookie IBM exec.

CES '93 also saw Trip Hawkins' 3DO system, a spectacular failure that was nonetheless one of the first consoles with true 3D graphics. There was also some fairly zany PC tech, like a monitor embedded in a desk with a glare-free window to see the images, "letting you use all your desktop." Oh, and the world's smallest fax machine. CES has played host to some serious format rivalries like Blu-ray versus HD DVD and VHS versus Betamax. In 1999, participants were gaga over a TV show recording format called ReplayTV, and CES awarded it Best of Show honors. Elsewhere, however, a little company called TiVo made a splash at the same show.

The reason folks were in love with ReplayTV was because it let you skip commercials in 30-second chunks at a time; the TiVo made you fast-forward through them. However, for that reason, broadcasters and advertisers were partial to TiVo's more ad-friendly offering, which likely helped it make inroads with cable providers like Verizon.

TiVo was gobbled up by patent outfit Rovi but is still a presence in many homes. Despite being the darling of CES 1999, ReplayTV fought numerous legal battles and went bankrupt in 2015. While the politics of broadcasting spelled the demise of ReplayTV, it was good old technological superiority that carried the day for the Sony-supported Blu-ray over Toshiba's HD DVD. With its smaller-wavelength violet laser, dual-layer versions of the disks could hold up to 50GB, compared to 30GB for HD DVD.

At CES 2004 (the same year Engadget launched), the Blu-ray Disc Association, with members including Sony, Panasonic, Pioneer, Philips and Samsung, held its first US press conference to promote the format. "I'll tell you that I haven't seen so many suits in one place in my life," reported Bill Hunt from Digital Bits at the time. "As the media filed into the room, the entire back wall of the conference room was lined with anxious Japanese executives and engineers."

They needn't have worried, because Blu-ray definitively killed its HD DVD rival at CES 2008, when Warner Bros. announced that it would produce disks only for Sony's format. On top of its higher capacity and technical superiority, Philips CEO Frans van Houten gave the other main reason why it likely won out. "He said Blu-ray discs provided the best protections against digital piracy," noted Hunt.

Much like with Nintendogate at CES 1993, the 2013 chapter was dominated by two devices. The $999 Razer Edge was a weird but interesting gaming device -- as my colleague Aaron Souppouris put it, "basically the Nintendo Switch, but not good." Then there was the DVR-like Dish Hopper that, like the ReplayTV, wowed audiences but pissed off broadcasters.

The 10-inch Razer Edge could be mounted into a force-feed gaming controller, giving your biceps a serious test. You could also plug it into a console dock and game with it, just like, well, a Switch, using an external controller. It even had a PC mode, letting you connect it to a keyboard.

The Edge was greeted with excitement, winning the Best of CES award (for a strange reason, more on that in a sec). However, when Engadget reviewed it sometime later, we found the console experience "flat" and weren't crazy about the poor battery life and price either. Other notable devices launched that year included the Pebble Smartwatch, Panasonic's crazy 20-inch tablet and the Sony Xperia Z smartphone.

CNET actually chose the Dish Hopper as Best of Show but was overruled by parent CBS -- in part because CBS was in a legal battle with Dish. The decision generated a lot of criticism and journalist resignations, and it caused the CTA to sever ties with CNET and restore the Best of Show award to Dish. Ever since then, Engadget has produced and presented the annual Best of CES awards.

Chevy's Bolt is in there somewhere.

Auto shows are supposedly where cars go for glory, but by 2016 they had become so tech-focused that CES was giving them some love too. We were particularly enthralled with Chevy's Bolt, awarding it Best of CES. At less than $30,000 after federal tax rebates, it's "a Tesla for the rest of us," we said, noting its excellent 238-mile range and sporty demeanor.

Another interesting EV introduced at the show was the Zero 1 from Faraday Future, but it's now in significant jeopardy because of the financial and legal problems of investor Jia Yueting. Meanwhile, following its disastrous and costly Dieselgate scandal, Volkswagen also came to promote its quick-charging BUDD-e concept, which eventually became the I.D. series of EVs later that year at the Paris Auto Show.

This year, cars could have an even stronger presence at CES 2018, with Hyundai and Kia showing off autonomous AI assistants in cars, Lyft giving Las Vegas rides, and LG partnering with Here on its own self-driving system. We're also expecting new driver-safety AI systems, cheaper LIDAR sensors and smart-charging devices. If you need any more proof, the CES 2018 keynote speaker is none other than Ford CEO Jim Hackett.