Gaming laptops are cheap and portable at CES 2018

CES 2018 marks a turning point, however. With the arrival of Intel's eighth-generation Core with RX Vega M graphics and recent models with NVIDIA's shrunk-down Max-Q graphics, owning a powerful laptop no longer means sacrificing your back in order to do more than two hours of gaming. At the same time, you won't need to pay a fortune for a lightweight model that's also a decent gaming machine.

To be sure, the trend started in late 2016 with the arrival of powerful, lightweight laptops like the Razer Blade that used mobile versions of NVIDIA's GTX 10-series chips. That trend has accelerated rapidly, however, with recent tech from both AMD and NVIDIA.

The resulting silicon frees up about three square inches of space, yet with speed a hair better than NVIDIA's GTX 1050 mobile card (perhaps around the level of the GTX 1050 Ti) in the laptop GL configuration. GH chips suitable for small desktops or larger laptops can run a bit faster than NVIDIA's 1060 Max-Q, Intel claims. The latter has enough power for VR, and to prove it, Intel unveiled Hades Canyon, the world's smallest VR NUC, during its CES 2018 keynote.

HP's new $1,360 Spectre x360 15 convertible (above), unveiled at CES 2018, is the first PC to exploit the tech. Even with the weight premium of a 2-in-1 shell and 4K touchscreen, it has a slim 19.8mm profile and weighs just 4.6 pounds. Yet according to Intel and AMD, it should deliver graphics performance somewhere between dedicated NVIDIA GTX 1050 and 1060 graphics -- not bad for a single chipset.

Another new model boasting Intel and AMD's chip combo is Dell's XPS 15 two-in-one, which starts at $1,300. Like the Spectre (kind of a bad name choice now), it's a convertible with a 4K touch display that's 16mm and weighs 4.3 pounds.

The power and size savings pay dividends. While a smaller 14-inch Razer Blade gaming laptop with NVIDIA GTX 1060 graphics weights 4.1 pounds, you'd be lucky to get four to five hours of battery life on the 4K model.

However, Dell's and HP's models benefit not only from lower power consumption but also more space to put larger batteries. Assuming their claims are accurate, the XPS 15 two-in-one offers up to 15 hours of battery life while the Spectre x360 can run for 13.5 hours and get to a 50 percent charge in just 30 minutes. Both models are also considerably cheaper than the $1,899 Razer, too, despite having larger 4K 15-inch screens.

We'll likely see more models roll out over the next few months with the Intel/AMD chips, and manufacturers should easily be able to get regular, nonconvertible models well under four pounds for even less money.

At the same time, laptops that tap the full potential of NVIDIA's Max-Q graphics started to appear earlier this year. Max-Q offers nearly the same performance as regular NVIDIA GTX graphics but in a lighter, more power-friendly size. 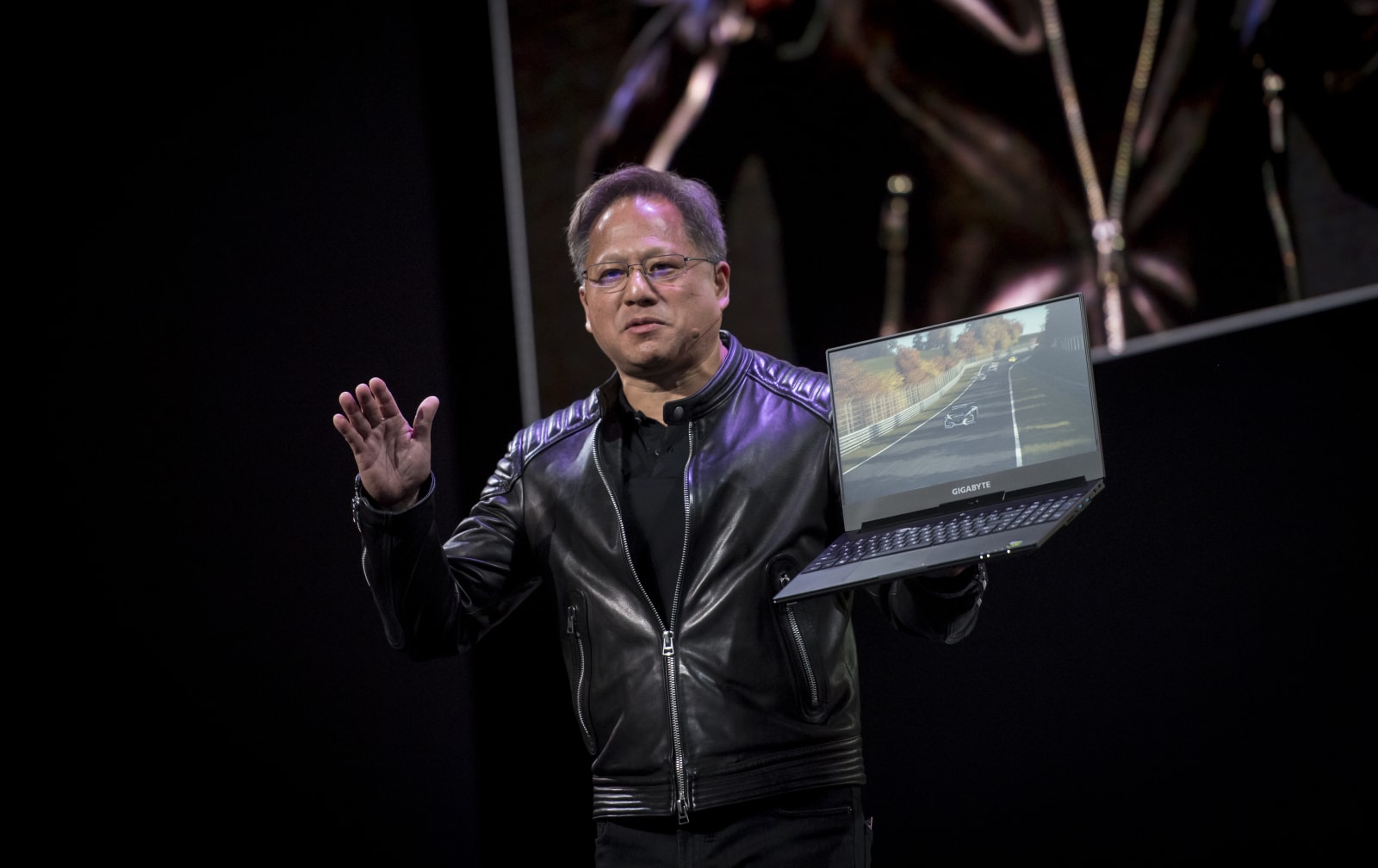 NVIDIA CEO Jen-Hsun Huang drove home those points while flaunting Gigabyte's $2,200 Aero 15x laptop during NVIDIA's keynote at CES 2018 (above). "OK, can you guys see this? This has four times the performance of a MacBook Pro," he said. "Twice the performance of the highest-performance game console. This is what a latest-generation gaming laptop looks like."

Moving down a bit in weight and performance, Acer revealed the $1,699 price tag for its 13.5-inch fanless 2-in-1 Switch Black Edition at CES, with an eighth-generation Intel Core i7 chip and NVIDIA GeForce MX150 CPU (the "first ever fanless PC with discrete graphics," Acer claims). While that combo won't give you quite the performance of the Vega or Max-Q chips, it weighs in at just 2.5 pounds, shockingly little for a convertible with discrete graphics. If that's too much to spend, other MX150-equipped models like the Acer Aspire E15 are as little as $700.

All of this will make 2018 a very good year for you, the demanding Windows 10 gamer, virtual reality user, video editor or graphic artist. The current and upcoming models will give you lighter weight and/or cheaper choices, whether you want a maxed-out gaming machine, a detachable 2-in-1 with discrete graphics or a lightweight laptop that can game and edit 4K video.

Even if you just do web and documents and plan to game here and there, why get a model with integrated graphics when there are better options? For years, I've dreamed of an affordable laptop I can take to a trade show to edit posts and videos without worrying about battery life, then game or use for VR afterward. By CES 2019, it might be unusual to see a laptop without those capabilities.