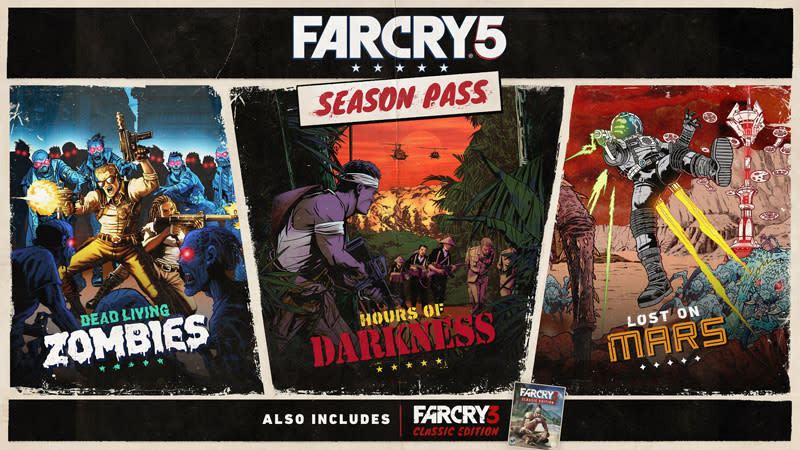 It's almost time to head to Hope County, Montana. In addition to Far Cry 5's American vibes, there will be more to explore if you pony up for the game's season pass. The trio of adventures will have you battling the undead in "Dead Living Zombies," the Viet Cong in "Hours of Darkness" and gigantic spiders in "Lost on Mars." Sure, aside from "Hours of Darkness" these sound pretty over-the-top, but they aren't out of the ordinary for the series. For example, Far Cry 3 had the awesome, '80s-inspired "Blood Dragon" add-on pack that starred Michael Biehn.

More than just expansion episodes, though, season pass purchasers will also gain access to Far Cry 3 Classic Edition, which sounds like a gussied up version of the third game in the series. That'll go on sale separately for PlayStation 4 and Xbox One this year, but PC players and console folks who buy the season pass (or the game's "gold" edition) will get it four weeks ahead of everyone else.

What's missing is pricing for the season pass. The standard game is $60, while the gold edition is $90. The extra $30 includes the base game, season pass and some cosmetic items. We've reached out to Ubisoft for additional information and will update this post should it arrive. Far Cry 5 will be released on March 27th.

In this article: addon, business, dlc, farcry, farcry3, farcry5, gaming, pc, pcgaming, playstation, playstation4, ps4, seasonpass, steam, video, windows10, xbox, xboxone
All products recommended by Engadget are selected by our editorial team, independent of our parent company. Some of our stories include affiliate links. If you buy something through one of these links, we may earn an affiliate commission.