It’s an interesting, if niche device with loads of potential.

A few months ago, I met my favorite dog. I was standing in my friend's living room when Tassie, a little black and white chonzer puppy, came sniffing by my feet. She looked up at me, got up on her hind legs and placed her two front paws on my shin. A second later, she leaned forward, crossing her paws behind my calf and hugged my leg.

I froze, my heart stopped and I melted into a puddle on the floor. I didn't dare to move in case she stopped hugging me. But then I thought, "This is a moment I want to memorialize!" So I reached for my phone, and as I shifted my weight slightly, Tassie walked away. I tried to get her to hug me again, but to no avail. My heart had been won, but the moment was lost.

If I had had a Google Clips with me then, that story might have ended differently. I'd have had a shot at recording that moment for posterity. It's kind of like Snap's Spectacles in the body of a GoPro, being told when to capture bursts of video by built-in AI. Google is calling it a smart camera, and named it Clips, because it records ... clips. Get it?

It's a $250 accessory designed to help you capture moments you might otherwise miss when reaching for a phone. Google is quick to emphasize this isn't meant to be a wearable or always-on camera; it's intended for a pretty specific audience -- parents of human babies and fur-babies. 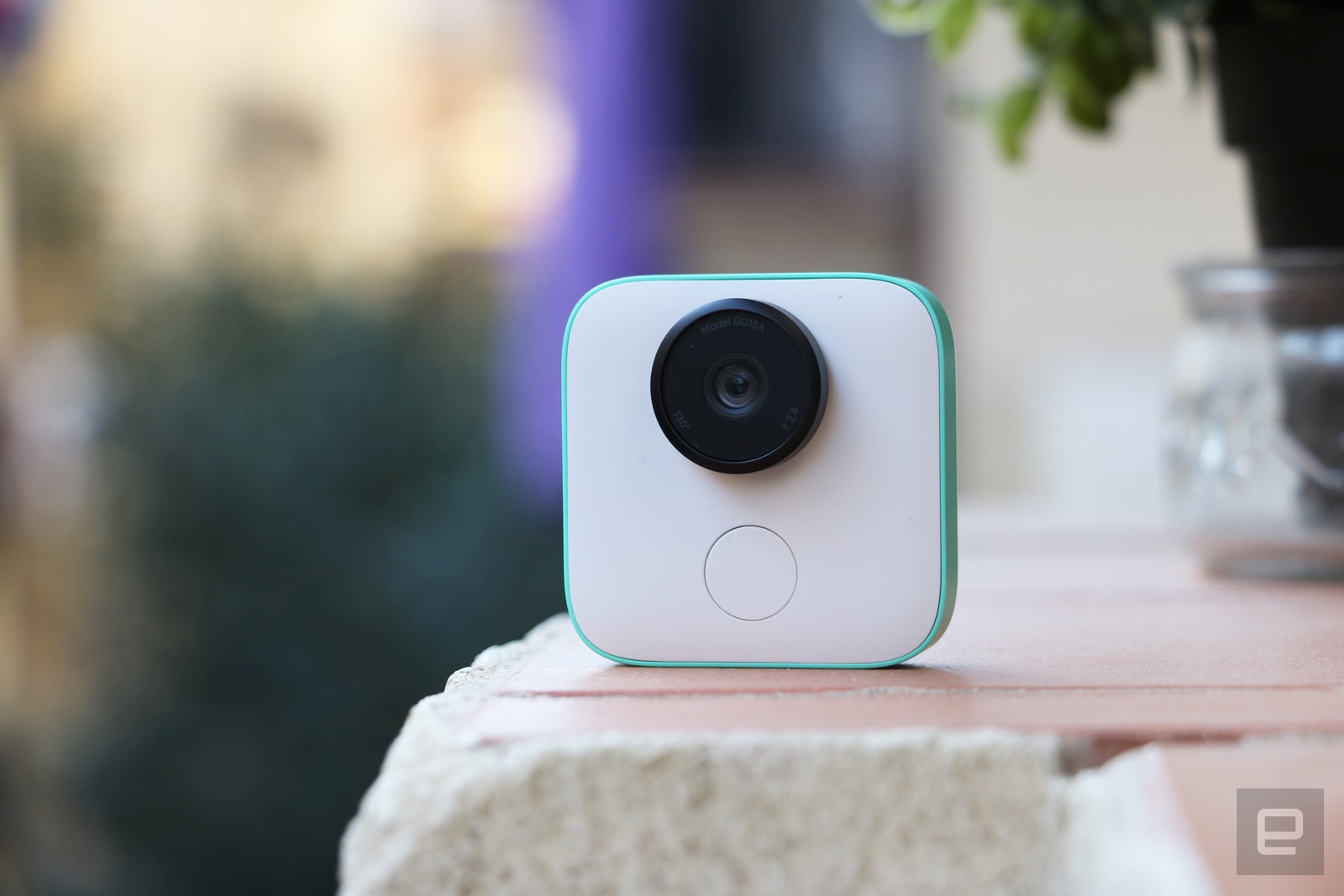 Kids and pets tend to be careless with gadgets, so it's a good thing Clips is pretty durable. It survived a few falls during my testing from between 3 and 5 feet high, thanks to its sturdy build and the Gorilla Glass 3 covering its lens.

Twisting that lens turns the camera on, and one of three white LEDs blinks to indicate it's watching. When it thinks something interesting is happening, it'll capture a seven-second burst of video. There's also a shutter button you can press to take a shot, but the idea is that you shouldn't have to use it often. Google's built-in AI is supposed to be smart enough to recognize scenes that are exciting. 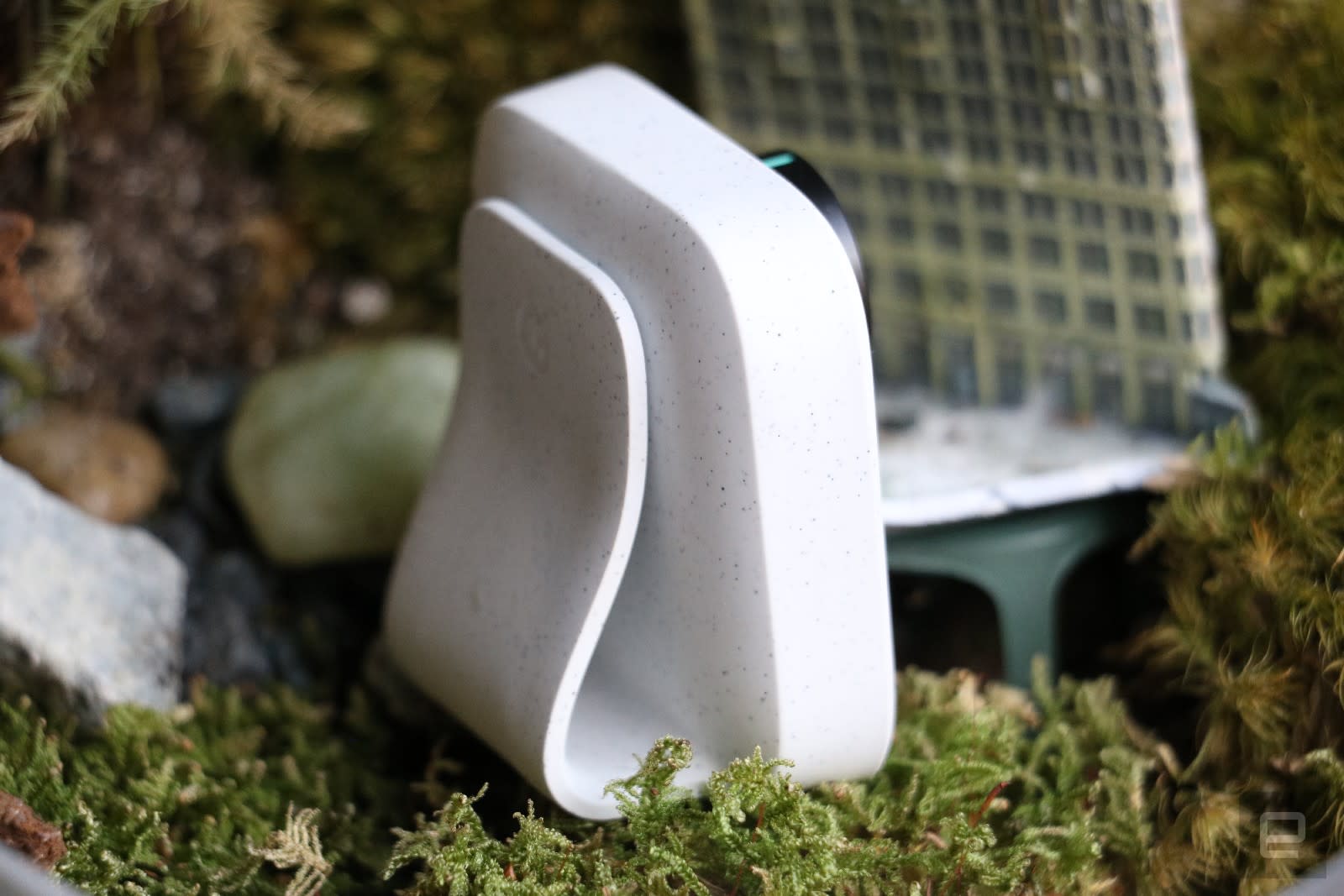 Google includes a sturdy clip case that doubles as a stand so you can attach the camera to the back of a chair or your diaper bag or set it on an uneven surface to get more angles. I found myself using it as a stand most often.

There's also a reset button on the camera's bottom, as well as a USB-C charging port, but there's no screen on the device. You can use your phone as a viewfinder, though. That's it physically -- a lens, some lights and a shutter button -- super simple. 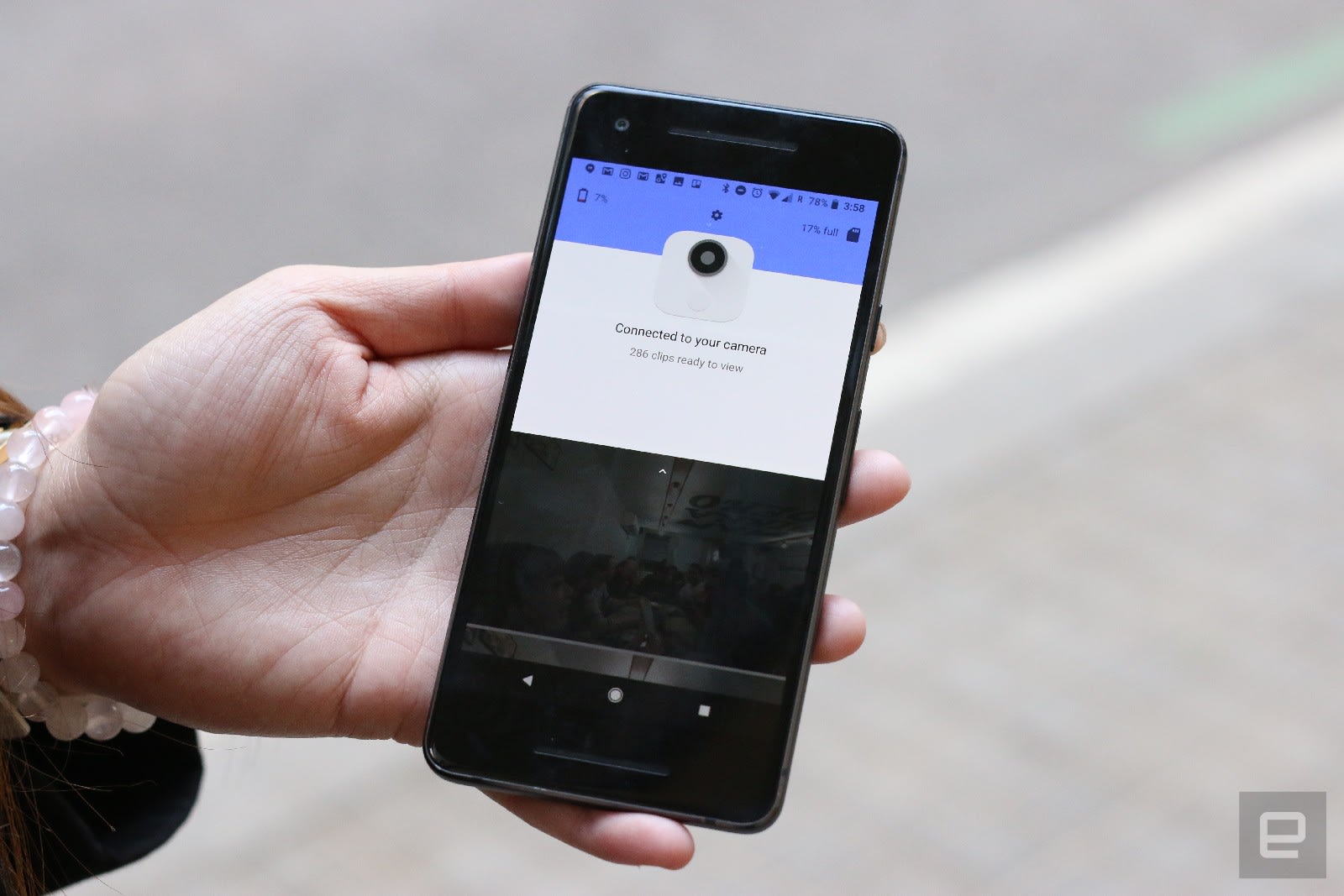 The setup process is relatively fuss-free, too. The camera is compatible with both Android and iOS. The main difference between the two is that you'll have to press a button on your iPhone to initiate a file transfer, while that happens automatically with Android. Pairing your phone to Clips is straightforward -- download and launch the app, press the camera's shutter button when instructed, and that's it.

I had significant connectivity issues when using Clips with a Huawei Mate 10 Pro, and it turns out only iPhones, Pixels and the Galaxy S7 and S8 work with the smart camera right now. Google will add more compatible phones over time, although which ones and how long that will take isn't clear. When I switched to a Pixel 2, my experience was much smoother. If you're not using an iPhone, Pixel or Galaxy, you might want to hold off on buying a Clips.

Once you're done setting up, you can start having fun! The system will recognize people, dogs and cats, and when it notices something interesting happening, it will trigger a recording. To be clear, this seven-second clip is actually a series of still images stitched together. The camera shoots at 15 frames per second and does not record sound (no mic onboard). This not only keeps file size relatively small, it also makes it easy to pull out individual frames that you can export as a picture.

I didn't use that feature much, though -- I prefered the videos. I especially liked the app's built-in editor that lets you crop into a specific part of the frame and control when to start and end the video. It was supereasy to focus on what I wanted and export just those parts. When it comes to sharing these clips, Google's also made it very simple. You can save your selection as a GIF, an MP4 or a Live photo, which you can then publish on basically any platform. 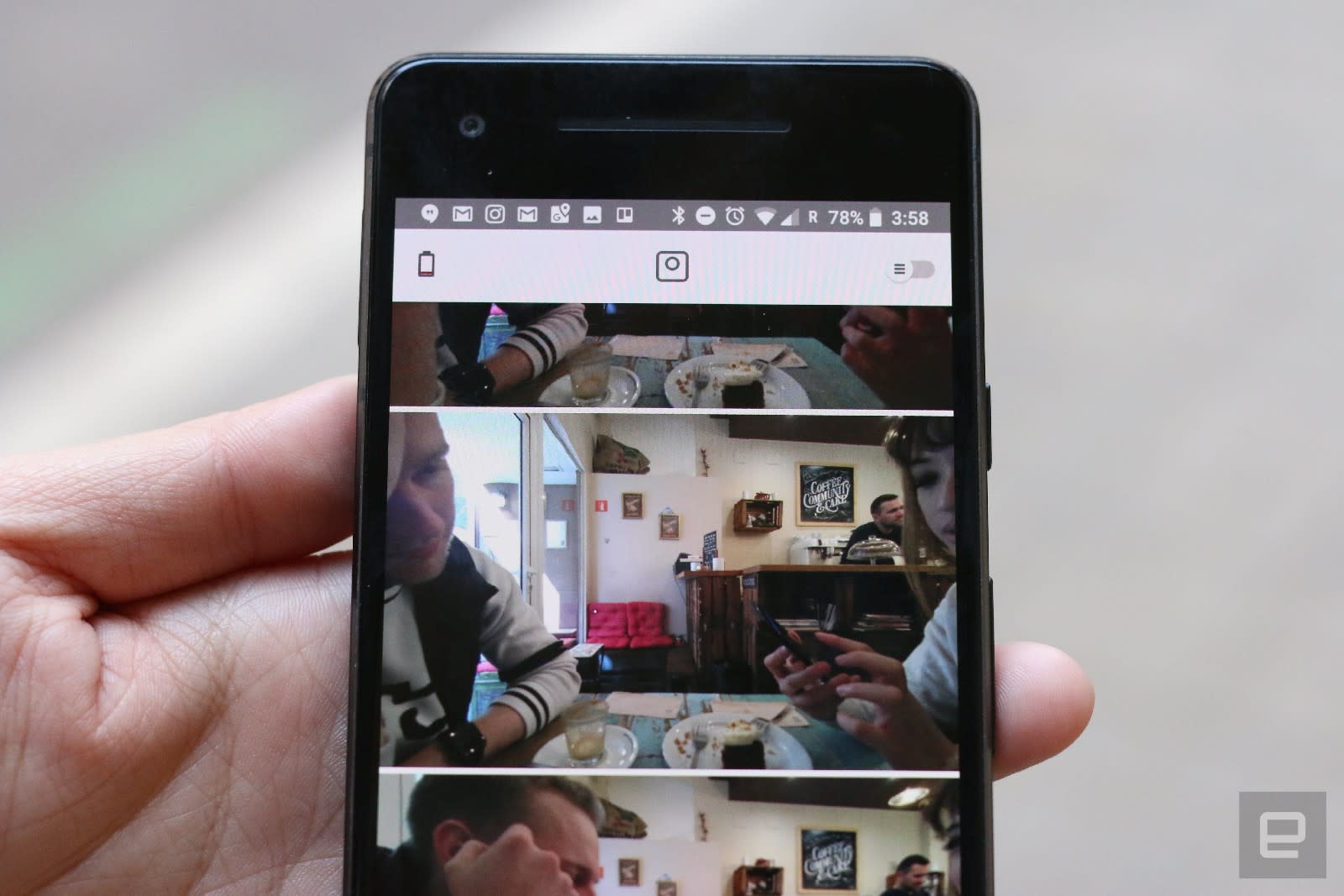 So Google has nailed the basics. But, what ultimately sets Clips apart is the AI. And this is where it gets a little tricky.

It's not easy to tell exactly what the AI finds interesting, or why. But after dancing around in front of the camera endlessly trying to figure out what exactly makes Clips tick, I've noticed some patterns. You can teach Clips who is important by training it on your Google Photos library or taking a photo of that person or pet using the onboard (or in-app) shutter button. Over time, it'll also learn who's important based on how often you hang with them.

When it sees a familiar face, the camera is more likely to snap. But even then, it doesn't capture everything they do. Movement alone, even with an important face in the frame, won't trigger the camera. When the face is smiling, though, Clips is more likely to be set off. One of the demos that Google showed us at a briefing was of a laughing child jumping off a stool. I tried to replicate that scene by hopping around in front of my Clips, but couldn't get it to record me.

I set the camera in front of a group of friends as we played a few rounds of Jackbox. Clips seemed content to only snap when either me or my friend Sam, whom it recognizes from my Google Photos history, moved. It failed to capture a moment of intense laughter when my friend Jill and I made an (awful) joke about Mother Teresa.

Clips was just as unpredictable when it came to capturing one of its intended subjects -- adorable doggos. I set the camera on the couch and let it run for an hour. During that time, Hudson, a terrier mix pup, sniffed around the Clips curiously. I immediately thought, "Yes! We got something good." But I was disappointed to find that it did not capture that moment. In fact, it only snapped about a dozen clips, and Hudson wasn't doing much in any of them. What's worse, I had actually focused the camera on Hudson's face and pressed the shutter to tell Clips I wanted more shots of him, but it still barely recorded his adorable mug. Most of the shots it got were of Hudson's cute little butt.

Bottom line: Even if you have Clips set up and switched on when a special moment happens, there's no guarantee the device caught it. At this point, only God and Google know what the AI catches, and you'll have to live with the unpredictability.

Google says it didn't design Clips to be "set it and forget it," but reps said they noticed that some parents left it in a room after playing with their kids and forgot about it. I've almost left it behind at meetings and restaurants, and there isn't an option to set a distance alert in the app, which would solve this issue.

If the AI notices nothing is happening after a while (Google didn't say how long), it will automatically shut itself off. Clips is not a security camera; it's not always always-on. Its battery will last about three hours if it's switched on and actively looking out for something to record. Even if you keep recording for three or four hours straight like I did several times, it's almost impossible to fill up the device's 16 GB of storage. After collecting about 70 Clips, I had used only about 8 percent of the space.

That's in part because once you save a Clip to your phone, it's removed from the internal memory. This is a minor complaint I had with the whole setup. I wanted to save all my clips to my phone to make sure I didn't lose them in case I had to reset my camera, but I also wanted them to stay in the app's stream so I could still tweak them from Clips' editor. 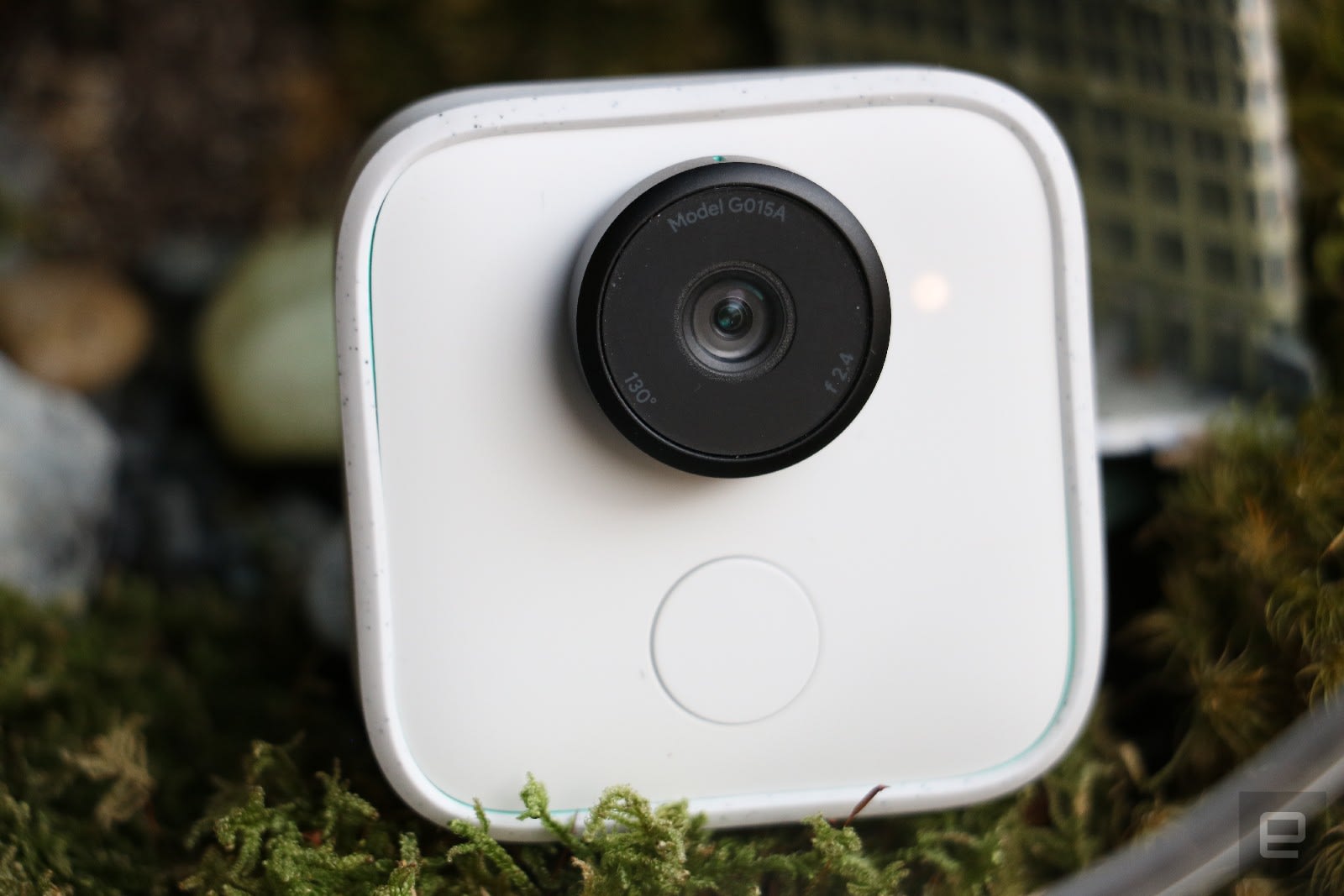 That's a relatively small gripe compared to the many things I appreciate about the device. I like its premise, its simplicity, its design and most of its results. I wish the price were a little lower and that the AI was more reliable, but ultimately it lives up to most of its promises.

Most of all, I am intrigued by its potential. Sure, this was designed for parents, but think of all the ways the rest of us could use this. And I don't just mean for selfies. Athletes could record themselves performing slam dunks or back-to-back 1080s. Chefs could get closeups of their chopping prowess; circus performers could show off their mad juggling skills. Clips is being marketed to a surprisingly limited audience, but with a few tweaks it could be pretty compelling for the rest of us nonparents.

All products recommended by Engadget are selected by our editorial team, independent of our parent company. Some of our stories include affiliate links. If you buy something through one of these links, we may earn an affiliate commission. All prices are correct at the time of publishing.
View All Comments
Google Clips review: A smart, but unpredictable camera