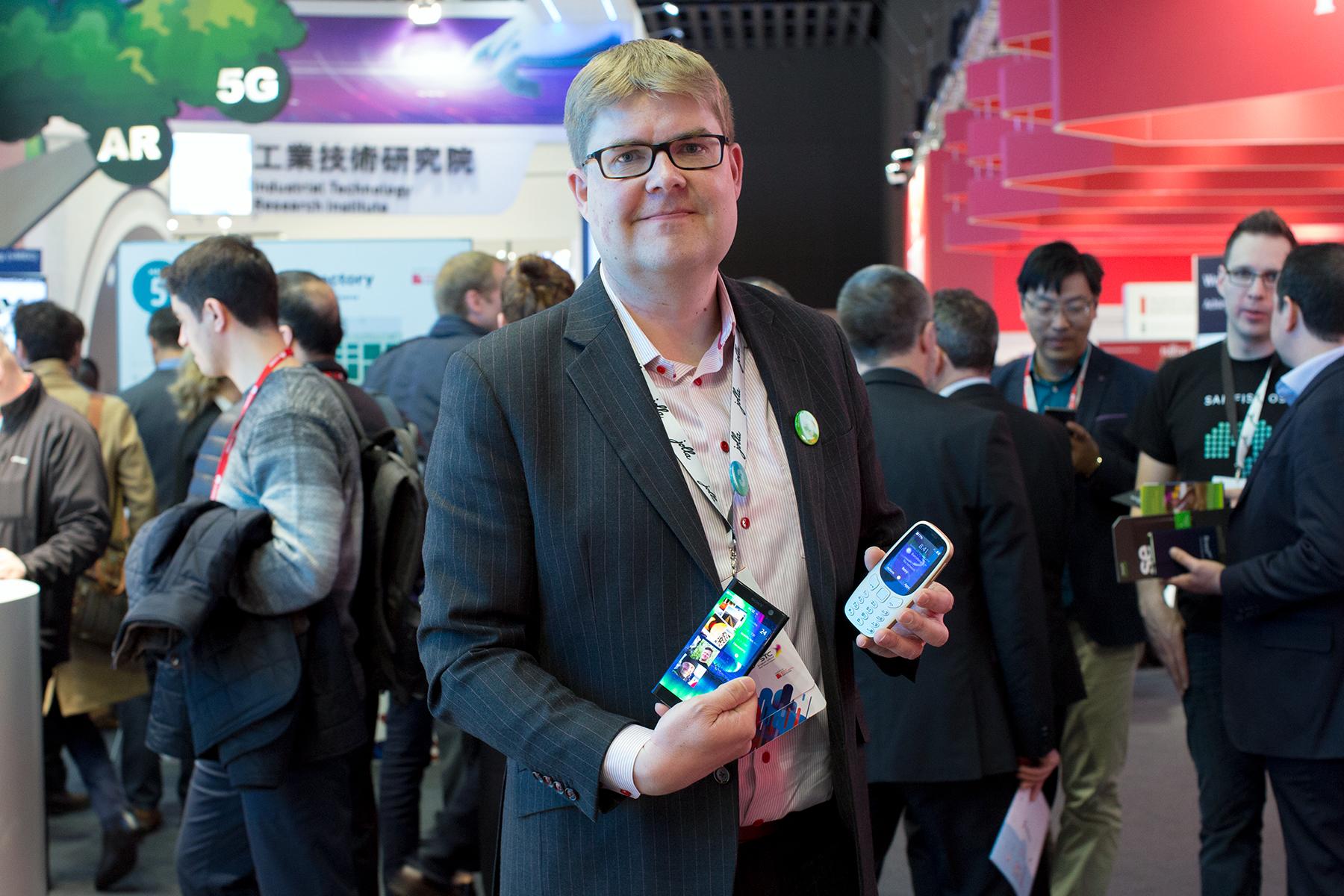 Wander the halls of Mobile World Congress and you'll notice a theme on almost every phone manufacturer's stall: Android. Google's operating system has slowly suffocated every "alternative" adversary including Firefox OS, Ubuntu Touch and Windows Phone. But in the middle of hall five you'll find an unlikely holdout -- Sailfish, a quirky mobile platform by Tampere-based developer Jolla. Walk by the company's stall and you'll find a small group of Finnish employees eagerly showing off the few phones that run their swipe-based software. They're grinning like children, which is no surprise given the hell they've been through to get here.

Most people know Jolla for its quirky 'other half' phone. It was the first hardware to run Sailfish OS -- a continuation of the MeeGo platform that Nokia abandoned for Windows Phone -- and boasted swappable backs that could add new hardware features and themed software. Jolla hoped brands would build backs for their most devout fans — a Real Madrid cover, for instance, might come with custom wallpaper, ringtones and an app for watching matches -- but few embraced the idea. Still, the hardware was intriguing because of the operating system it shipped with. In a sea of Android conformity, Jolla stood out. 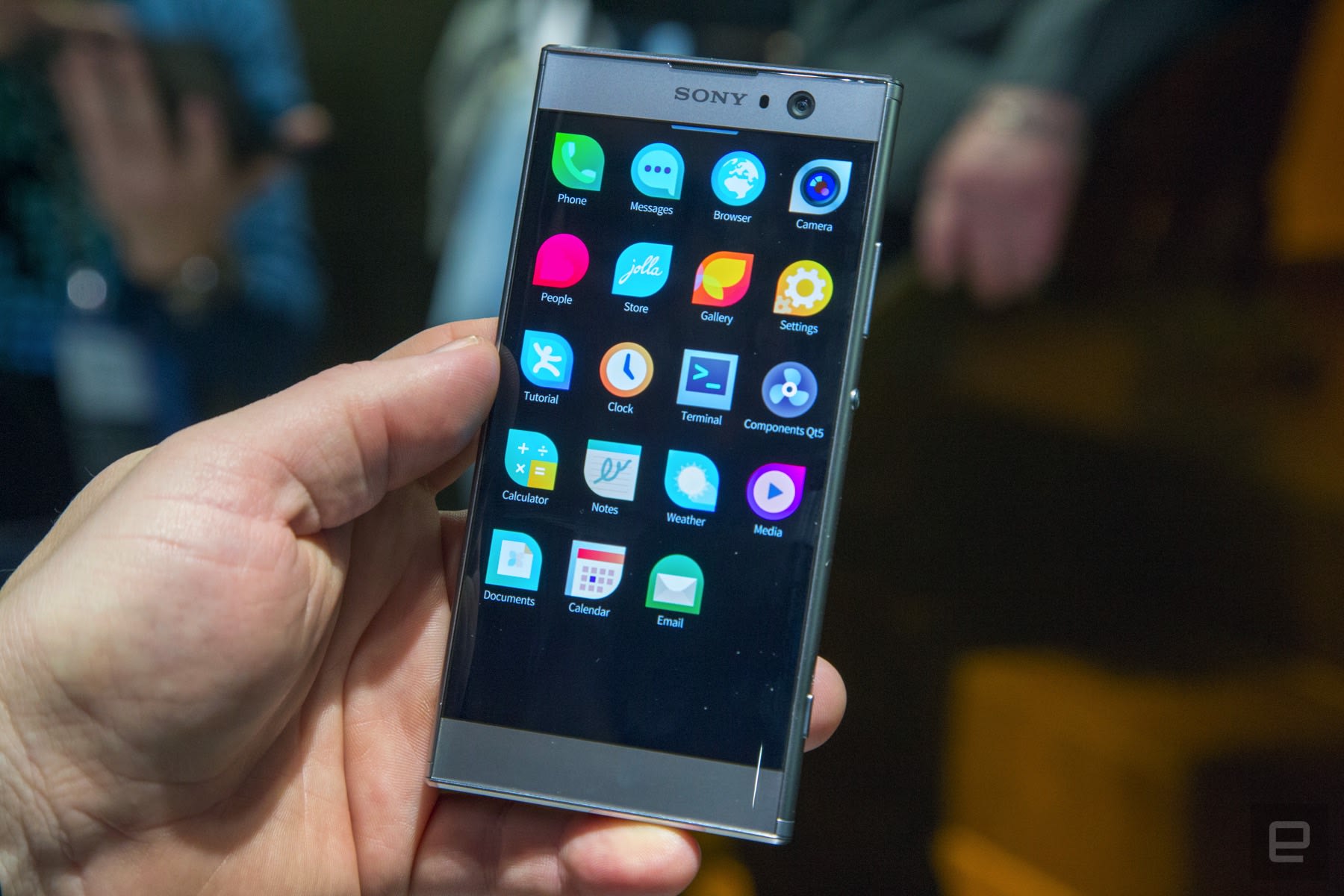 The combination of custom hardware and software is reminiscent of Apple. But in truth, Jolla was seeking a platform play similar to Google and Android. It wanted to license its operating system but couldn't get anyone to take its pitch seriously. The industry was, unsurprisingly, skeptical of a startup with a completely unproven platform. To win them over, Jolla needed to make a smartphone of its own first. "We realised that we had to develop our own phone in order to bring life to the Sailfish operating system," Sami Pienimäki, CEO and cofounder of Jolla said.

Many of Jolla's employees were former Nokia staff, so the company had some experience shipping phones. The first Sailfish device, however, was a completely different challenge. The phone needed a suite of stock applications and a custom app store with robust submission and moderation processes. The team also required distribution partners -- or at minimum, a reliable online storefront -- and a customer service team that could deal with basic troubleshooting, device repairs and over-the-air software updates. "All of that kind of stuff, we just had to build it," Pienimäki explains, "like a real go-to-market project does."

In February 2013, Jolla attended MWC with a prototype version of the phone. Three weeks after the show, ST-Ericsson, the team's chipset provider, called Pienimäki to announce it was exiting the mobile business. Jolla had just promised its investors that the phone would ship by the end of the year. "We had a really, really, really, shitty situation," Pienimäki recalls. The team reworked the system architecture so it could support Qualcomm, MediaTek and other third-party processors. While stressful, it meant the company could support more hardware and coax a wider range of device manufacturers.

The Jolla phone came out in November 2013. It shipped with a Qualcomm Snapdragon 400 processor, 1GB of RAM and a 16GB of internal storage. The company was praised for trying something different with its software, which centered on swipes from the edges of the display. But many, including Engadget, found the interface to be needlessly complicated and confusing. Although the phone never sold in large, meaningful quantities, Jolla had its fans, and the launch showed that the company was serious about its dream of an alternative operating system.

Most phone manufacturers would follow up their first device with a new, slightly improved handset. But the Finnish startup wanted to prove that Sailfish OS could scale to different screen sizes, so it tried to build a tablet. Looking for cash and a little marketing buzz, it turned to the crowdfunding site Indiegogo. The company set a target of $380,000 and smashed that figure in a few hours, racking up roughly $2.5 million and 21,633 backers by December 10th, 2014. It was a huge moment for the company and an early indication that Sailfish OS could reach mainstream appeal.

Four months later, the company signed its first licensing deal with Intex Technologies, a phone manufacturer in India. At last, it had persuaded someone to ship a device with Sailfish OS, rather than Android. The partnership was overshadowed, however, by a supply issue with with the tablet. A week before the slate's release date, a supplier told Jolla that the memory chipset and display it had chosen were no longer available. "For a software vendor, it's always like 'Aaargh!,'" Pienimäki shouted, "'Like hey, we're about to ship this next week, and now you're telling me that you don't have the display?! What the fuck?!'"

Jolla's finances were already tight. It desperately needed another licensing deal to pay for the manufacturing setbacks. "It was like cat and mouse all the time with the supply chain," Pienimäki said, "and the ODMs that we were working on." By November, however, the situation had become untenable and Jolla went bankrupt. Management had been working on a new round of investor funding, however, and this materialized in December. "We simply raised more money to overcome the situation," Pienimäki said. "It meant we were able to save the company and of course, save the team. The team is the most important."

For some, quitting was never an option. "I guess it's inevitable that at some point you think about it," Pekka Vuorela, a software developer at Jolla said. "But still, I wanted to do this, because it's really interesting to do an operating system and handle absolutely everything. It's a huge project and it intrigues me."

In February 2016, Intex unveiled the Aqua Fish phone running Sailfish OS 2.0. In addition, Jolla revealed that the team behind Fairphone -- a handset with sustainably sourced materials -- was considering its platform. The company knew, though, that it needed to make some drastic changes to survive. So it laid off its hardware division and cancelled the tablet, promising refunds once its financial situation improved. It was a difficult, but necessary decision to avoid the fate of so many other alternative operating systems. Competing with Google and Android head-on, the team realized, was business suicide.

Instead, Jolla doubled-down on its licensing strategy. This time, though, it focused on enterprise customers that require secure, reliable hardware for their employees. The work wouldn't be glamorous, but it would bring in the revenue required to pay the team and development of Sailfish OS.

"We want to see our platform alive," Marko Saukko, chief engineer at Jolla said. "That keeps us going, and that got us through those ups and down we had. When we had the low moment, and the team size was reduced a little bit, we still kept on going. We still had energy left and we were able to push from the bottom back up."

"We want to see our platform alive."

Jolla's pitch was simple: If you license Sailfish, you get full access to the source code. Pienimäki claims that none of its rivals offer this level of transparency. Even the Android Open Source Project (AOSP) comes with "proprietary stuff" that privacy-focused companies -- and governments with a distaste or distrust of America -- would prefer to avoid. "That really sets us apart from everybody else," Pienimäki said. Sailfish OS, the company hoped, would become synonymous with security.

"It's that, combined with the fact that we are doing this in open source with the global Sailfish community," Pienimäki added. "The base platform that we create will always be open, and that's the foundation of trustworthy operation."

Later that year, Jolla's platform achieved "official status" with Russia. In a press release, the Finnish company declared it was the "only mobile operating system" that had been "officially accepted to be used in governmental and government-controlled corporations." Jolla sees the country as a huge opportunity. There is a "very sizeable" bubble of kremlin-controlled companies, according to Pienimäki, which Jolla hopes to win over. "Those are big companies, and that's definitely a target in Russia."

Since then, Jolla has inked deals in China -- a country that, like Russia, has a difficult relationship with Google -- and Latin America. In practice, it works a little something like this: Jolla will issue its source code to local partners who liaise with enterprise customers and provide the final hardware. Clients will request services, or features, that Jolla then solves with tools, or "enablers," in Sailfish OS. It could be a mobile device management framework, or an open VPN solution -- mundane features to the average consumer, but critical for secure business communications.

"A good example is security algorithms," Pienimäki said. "We don't do security algorithms for our clients, because typically they want to use their local partners to harden some communication systems. So something like that, in the platform, we'll only do enablers and tell them that, 'Okay here is an API and here you can put your local security algorithm.'"

Sailfish OS is still a consumer product. These days, though, you have to download a community port or buy a version of the operating system called Sailfish X. The latter is compatible with a single device -- Sony's Xperia X -- although the company has plans to support the Xperia XA2, the upcoming Gemini PDA by Planet Computers, and a couple of Russian Inoi tablets later this year. Still, it's a tiny number of devices. And for now, it's nearly impossible to buy a Sailfish X license in the US.

"We have a 50-person team," Pienimäki stressed. "We cannot cover the whole world in one day, even though people expect us to do it. We just have to face the realities of having a business operation." Jolla has been surprised, however, by the uptake in licenses since Sailfish X launched. It's a small money-maker, but that doesn't mean it's unimportant to the business. Jolla needs Sailfish X to keep the community on its side and facilitate ideas, feedback and code. Without these diehard users, it would be impossible for the company to support so many different chipsets and devices, including the original Jolla Phone.

Jolla has spent the last year working with a couple of partners on Sailfish-powered feature phones. At MWC, however, it wanted to make a formal announcement so the larger industry is aware of the compatibility. Pienimäki won't say which companies it's working with, but pointed to the enduring popularity of flip phones in Japan. (When asked point blank if a Sailfish flip phone is coming, he smiled and simply said "maybe.")

"We cannot cover the whole world in one day, even though people expect us to do it."

Jolla had some profitable months last year and started issuing refunds to people who backed its tablet on Indiegogo. The company won't say how many are left, however. "It's not that many," Pienimäki claims. "Some of them are a bit noisy, but it's not really that many anymore." Jolla has promised to issue more refunds every time it has a profitable month. These, Pienimäki hopes, will happen at a "steady pace" by the end of the year. The company, however, is not profitable on a fiscal year basis, and continues to burn through investor cash.

Still, the company has survived. The corporate sector isn't glamorous, but it's allowed the Helsinki team to continue its dream of a MeeGo-inspired operating system. That, for now, is enough. "I'm a founder of the company," Pienimäki said. "I must believe in this. And I do, with all my heart. Maybe I'll be the last man standing if this all goes down some day. But that's my role and responsibility as captain of the ship."

In this article: Finland, gear, Jolla, JollaPhone, MeeGo, mobile, MWC2018, nokia, Sailfish, SailfishOS
All products recommended by Engadget are selected by our editorial team, independent of our parent company. Some of our stories include affiliate links. If you buy something through one of these links, we may earn an affiliate commission.