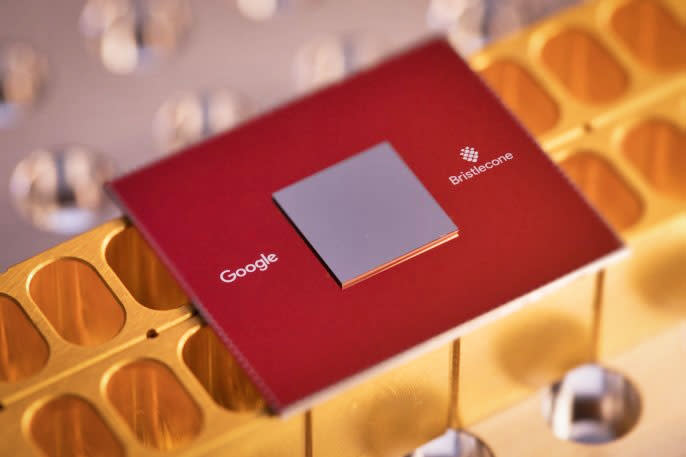 Like every other major tech company, Google has designs on being the first to achieve quantum supremacy -- the point where a quantum computer could run particular algorithms faster than a classical computer. Today it's announced that it believes its latest research, Bristlecone, is going to be the processor to help it achieve that. According to the Google Quantum AI Lab, it could provide "a compelling proof-of-principle for building larger scale quantum computers."

One of the biggest obstacles to quantum supremacy is error rates and subsequent scalability. Qubits (the quantum version of traditional bits) are very unstable and can be adversely affected by noise, and most of these systems can only hold a state for less than 100 microseconds. Google believes that quantum supremacy can be "comfortably demonstrated" with 49 qubits and a two-qubit error below 0.5 percent. Previous quantum systems by Google have given two-qubit errors of 0.6 percent, which in theory sounds like a miniscule difference, but in the world of quantum computing remains significant.

However, each Bristlecone chip features 72 qubits, which may help mitigate some of this error, but as Google says, quantum computing isn't just about qubits. "Operating a device such as Bristlecone at low system error requires harmony between a full stack of technology ranging from software and control electronics to the processor itself," the team writes in a blog post. "Getting this right requires careful systems engineering over several iterations."

Google's been vocal about its efforts in quantum computing for years -- back in 2015 it proudly announced a breakthrough that showed huge potential for quantum algorithms, for example -- but every other major tech company has a similar agenda. IBM is working on a general purpose quantum computer for business use, while Microsoft is also exploring the area. The race is certainly on for quantum supremacy, but as the Bristlecone research team writes, it's "cautiously optimistic" that it's going to win it.

In this article: Bristlecone, Computing, Google, personal computing, personalcomputing, processing, quantum, QuantumSupremacy, qubits
All products recommended by Engadget are selected by our editorial team, independent of our parent company. Some of our stories include affiliate links. If you buy something through one of these links, we may earn an affiliate commission.