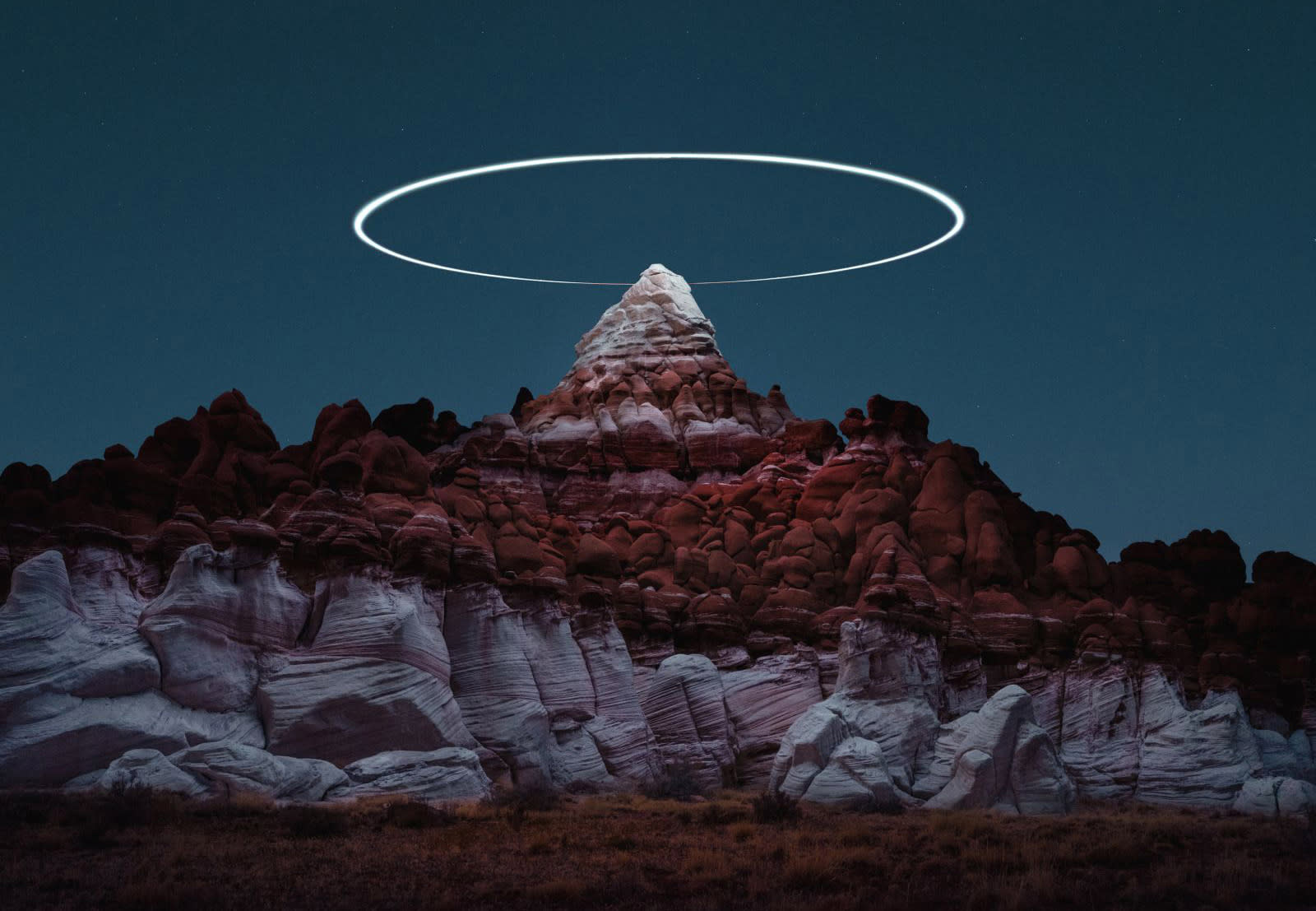 Drones usually act as flying cameras, often to great effect, but landscape photographer Reuben Wu has discovered an equally compelling use for them. In the series Lux Noctis (light the night), his UAVs both lit up and created halos around landforms in the Bisti Badlands of New Mexico, California's Alabama Hills and elsewhere. The results, he told National Geographic, are "a bit like a chiaroscuro painting, where one starts with a blank canvas and then adds light to the picture."

Wu has used the drones in two ways for his dramatic, surreal photos. In the first technique, he attached LED lamps to 3D Robotics drones and set them off on GPS-controlled flights. He took the photos with a medium format Phase One camera while the drone was stationary, experimenting with the height, angle and distance from the subject. Once back home, he layered the photos together until the image matched his vision.

For later photos, he created time-lapse exposures while the drones ran in set circles around the rock pinnacles, tracing out "halos" in the sky. "The circles are actual light paths of the modified drone I used to light the landscapes," Wu told PetaPixel.

Shooting time-lapse images at night often requires weeks of tedious planning, so adding drones and artificial lighting calculations to the equation increases the degree of difficulty. Making it tougher still, Wu never shoots when other people are around. "I keep my entire kit portable so I can hike to very remote spots. I never fly when there are other visitors present, it's important to me that the location is very remote and I am alone to create these pictures."

Lighting up landscapes with drones is a clever way to give them Hollywood grandeur without actually disturbing the environment. His technique is also meant to make you see our planet with fresh eyes. (To see other incredible photos in the series, click here.)

"Lux Noctis is a series of photographs (and motion pieces) depicting landscapes within the framework of traditional landscape photography but influenced by ideas of planetary exploration, 19th century sublime romantic painting, and science fiction," he wrote on Behance. "We are overwhelmed everyday by beautiful images of the familiar. I imagine these scenes transformed into undiscovered landscapes which renew our perceptions of our world."

In this article: art, cameras, Drones, entertainment, gear, illlumination, landscape, LuxNoctis, robots, TheBigPicture, thenewbigpicture, video
All products recommended by Engadget are selected by our editorial team, independent of our parent company. Some of our stories include affiliate links. If you buy something through one of these links, we may earn an affiliate commission.