Kia’s Niro Hybrid is a great SUV, if you’re not in a hurry

There’s a lot of tech as standard in this Plug-In, which is great for the pocketbook.
R. Baldwin|03.21.18
@strngwys

Crossovers, SUVs, CUVs or whatever you want to call them will continue to dominate showrooms. You can't blame automakers, the drivers of this country love a high-sitting utility vehicle -- even if it's really just a raised hatchback. It's also the reason more hybrid and EV powertrains are making their way into these vehicles.

With that in mind, Kia introduced the Niro Plug-In Hybrid -- an electrified version of its small crossover. It has an impressive EV-only range (26 miles), and a lot of tech that people expect from a new car including semi-autonomous features. With a starting price of $27,900, the SUV is an impressive vehicle... as long as you're not in a hurry.

The best part of the Niro Hybrid is that many features that are usually options come as standard. For example, while BMW and Mercedes charge you for Android Auto and CarPlay support, Kia just throws it in for free. The company knows that people want to plug their phones into their cars.

Yet, even if you decide not to use your smartphone, the infotainment system is solid. It's not breaking any new ground with its grid layout. But it accomplishes what these systems need to do: Give drivers quick access to navigation and media without too much clutter. This is the same system found in Hyundai vehicles, and in both instances, it's adequate. This is still something of a ringing endorsement, though, since most systems are terrible to navigate or throw way too much information at the driver. 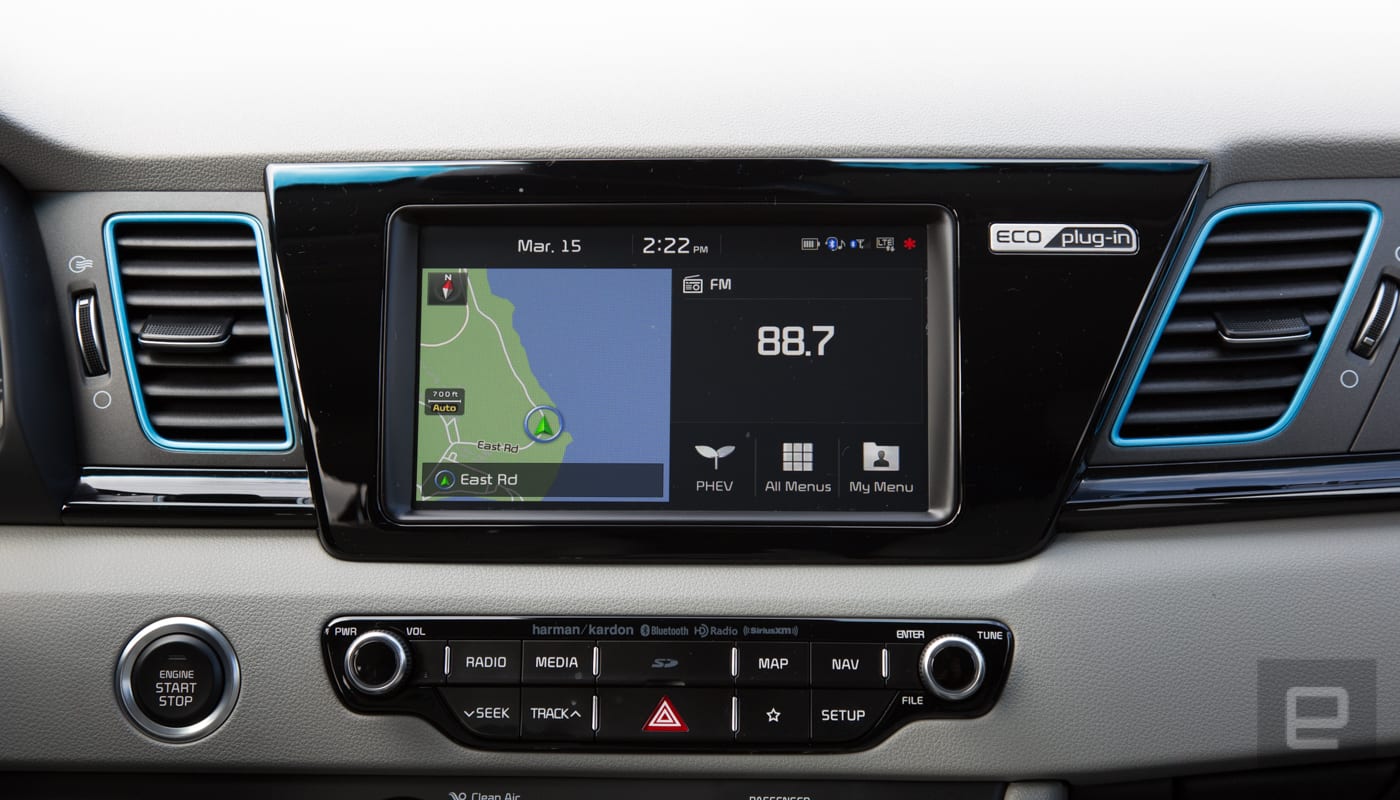 In addition to a solid infotainment system, Kia has the UVO app. I found it to be helpful for starting the car, warming it up and tracking its EV charge. Set up was easier once I realized there's an eco version of the KIA UVO app. I spent an embarrassing amount of time trying to get the regular app to sync with the car. Bonus, the app is also available on the base model Niro.

The tech that's available as standard in the base model extends to the adaptive cruise control and lane keep assist. The systems are not as polished as Nissan's ProPilot Assist (found in the new Leaf and Rogue) or Tesla's Autopilot, but it's nice to see these features standard on a crossover. That said, the lane-keep assist on the Kia is really best on straight roads or very wide curves. Anything curvier and you're going to be hassled audibly to get back in your lane, rather than actually "assisted."

I'm also not a fan of how the adaptive cruise control system handles stopped traffic. When it encounters a car that's stationary, the vehicle slows to a few miles an hour then disengages the cruise control. This means the car is still rolling forward towards the vehicle in front of it. Owners will probably get used to this, but the first few times it happens, it can be alarming. 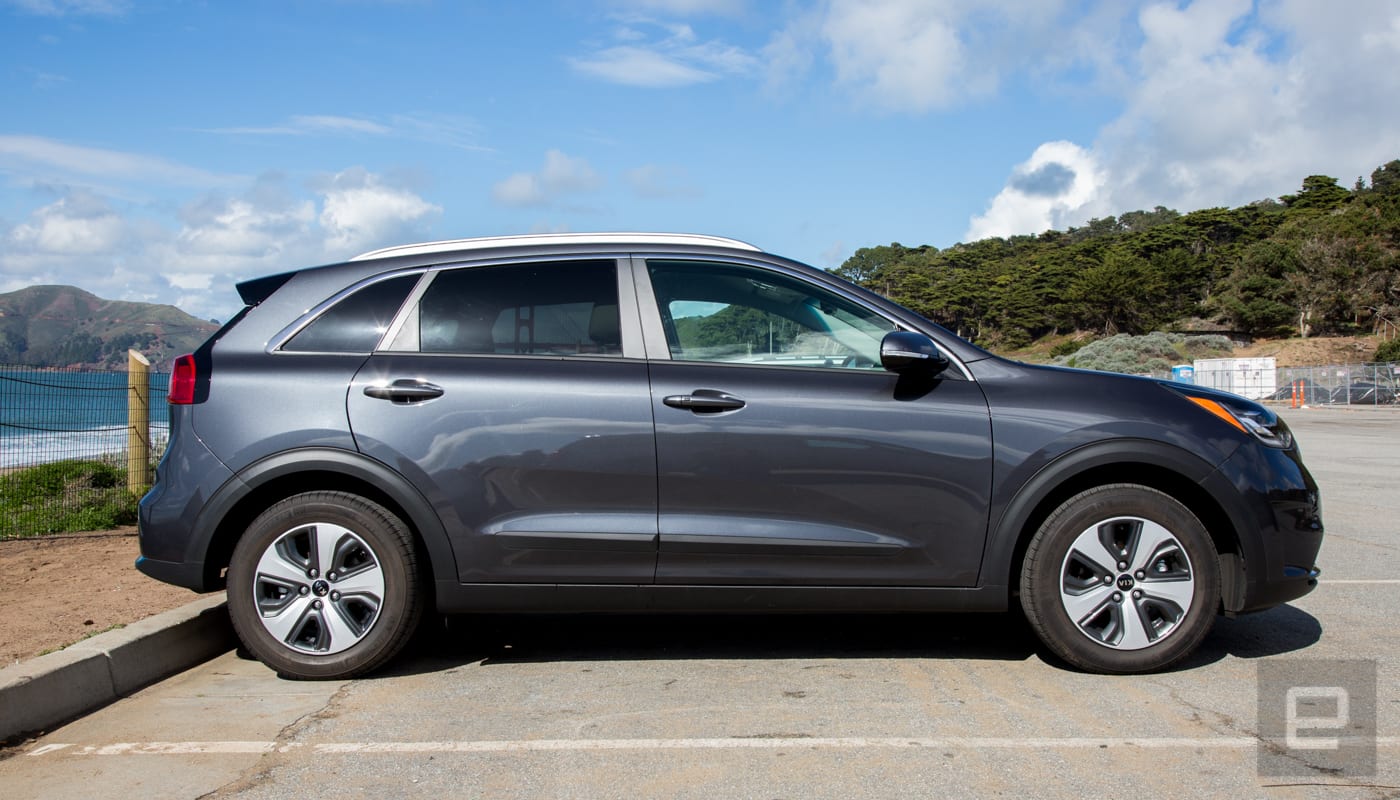 Another issue drivers may need to get used to is the acceleration of the Niro Hybrid. Or really, the lack thereof. Off the line, the Niro -- in regular mode -- takes its sweet time to get up to speed. Fortunately, there's a sport mode that'll get the 137 horsepower engine and 195 pounds of torque to go from zero to 60 in nine seconds.

Hitting the corners also isn't the Niro's strong suit. The suspension did an admirable job smoothing out the many potholes and cracks and in San Francisco's roads, but the Niro's body-lean around tight corners kept me from pushing it during spirited drives through the mountains.

Even though it's not going to win any drag races, being tuned for efficiency does have its advantages. In hybrid mode, I averaged 41 miles to the gallon. For a vehicle with enough storage to handle two keyboards, a synth and three drum machines in Pelican cases (as a musician, this is my "family") without putting down the rear seats, that's pretty great.

Kia rates the pure EV mode of the Niro plug-in hybrid as 26 miles per charge. Somehow, I got 26.3 in one instance. I rarely got the full promised range though, and I've never actually gone over that range in another car. That's without altering my driving habits during a mixed road of highway (about 30 percent) and city streets. Additional tests, yielded mid to low 20s.

Which brings me back to the acceleration. If you're not someone that needs the thrill of speed at every stop light, the tradeoff is great range. With a promised 26 miles and real-world tests getting close or even beating that number, for folks with short commutes, there might be weeks or even months between fill-ups. 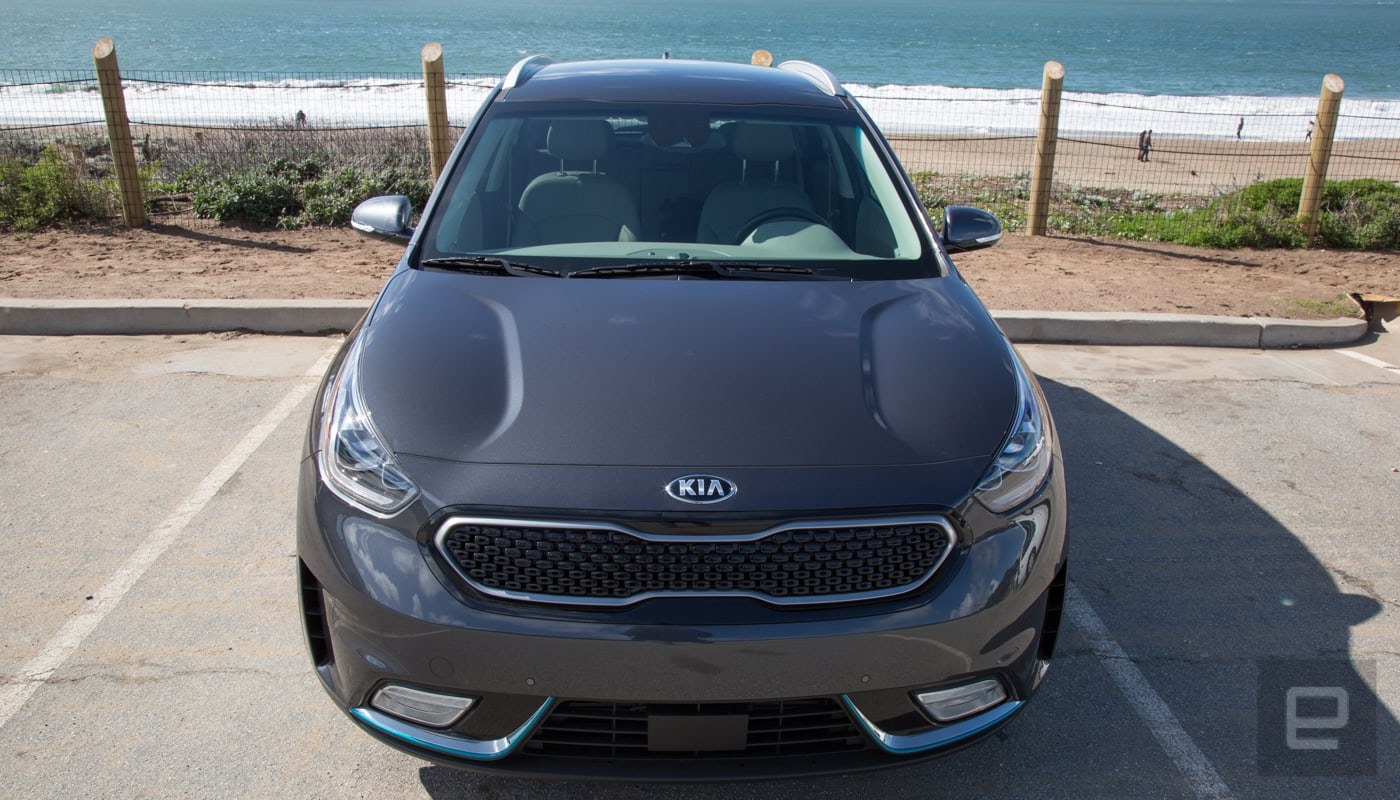 You will have to wait to get that EV range. Level 2 (the industry standard public charger) charging takes about two-and-a-half hours, while plugging the Niro into a typical 120-volt outlet requires about nine hours to get back to 100 percent. Unfortunately, there's no DC fast charging option.

The additional options that are available for higher trim models can drive the price up to $34,500 (such as the EX Premium, which I drove for the review). It has heated seats, a slightly larger display (8 inches instead of seven), parking assist, blind spot assist, a better sound system and some other features. Yet the big ticket items (adaptive cruise control, smartphone support, lane keep assist etc) are all included on the base model. It's worth noting that none of the upper trim levels offer any better performance options -- they all have the same engine and electric motor. 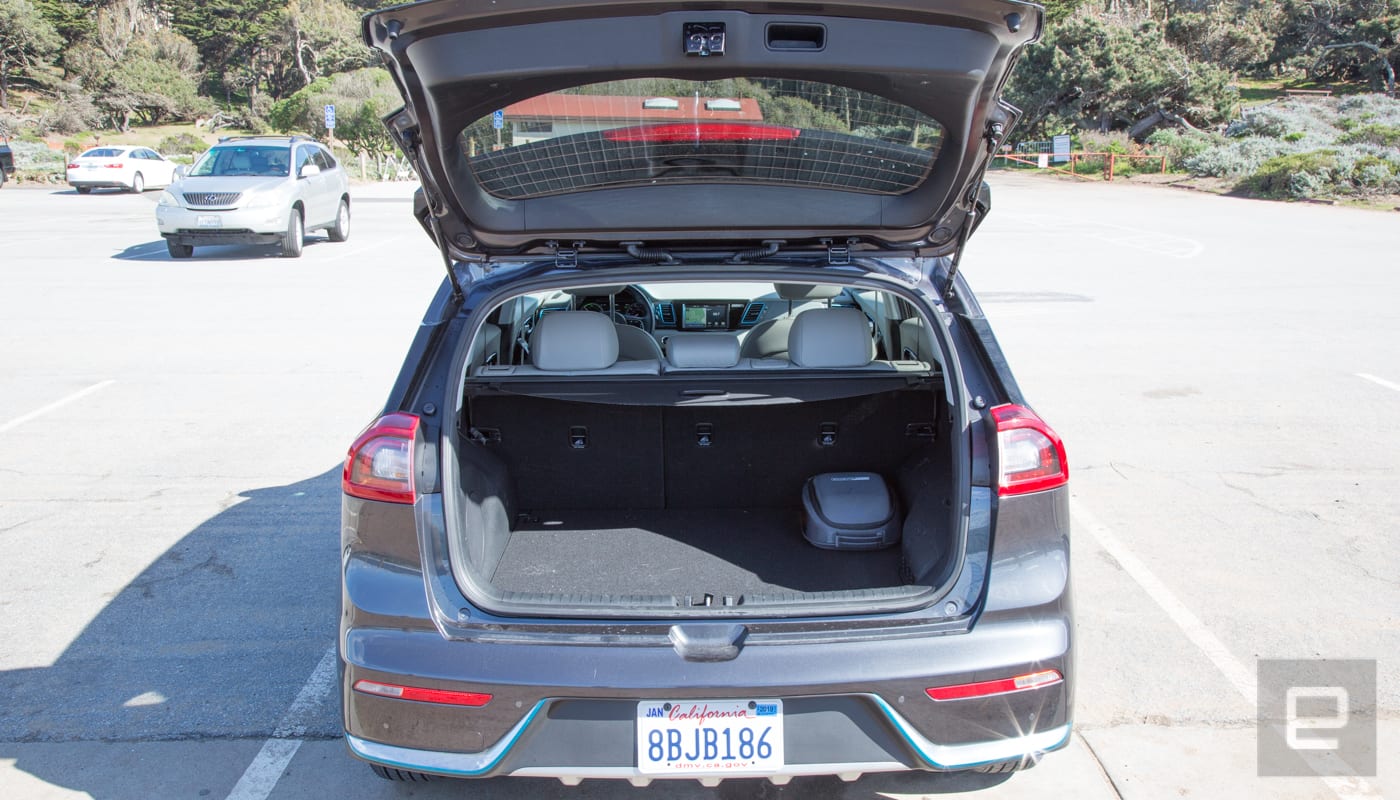 So yes, the Niro Plug-in Hybrid can get pricey, quick, but it doesn't have to if you focus on what makes this a great urban SUV with a small footprint (and with plenty of tech that doesn't cost you extra). The inclusion of features like semi-autonomous modes, smartphone integration etcetera bodes well not only for Kia customers, but for anyone looking for a new car. Making these features standard forces other automakers to do the same. Let's just hope they can pull it off in a car as charming (but maybe just a bit quicker off the line) as the Plug-In Niro.