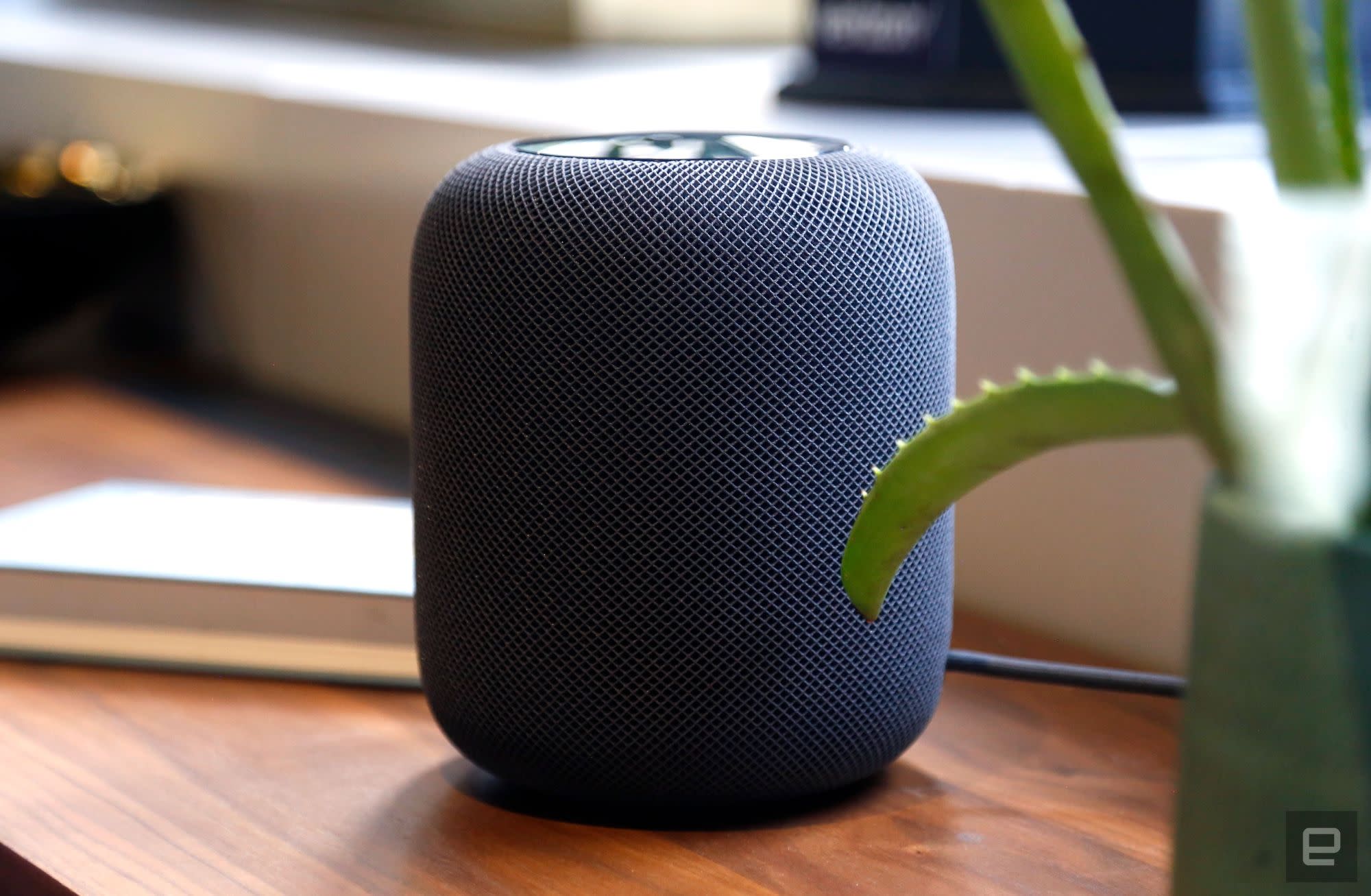 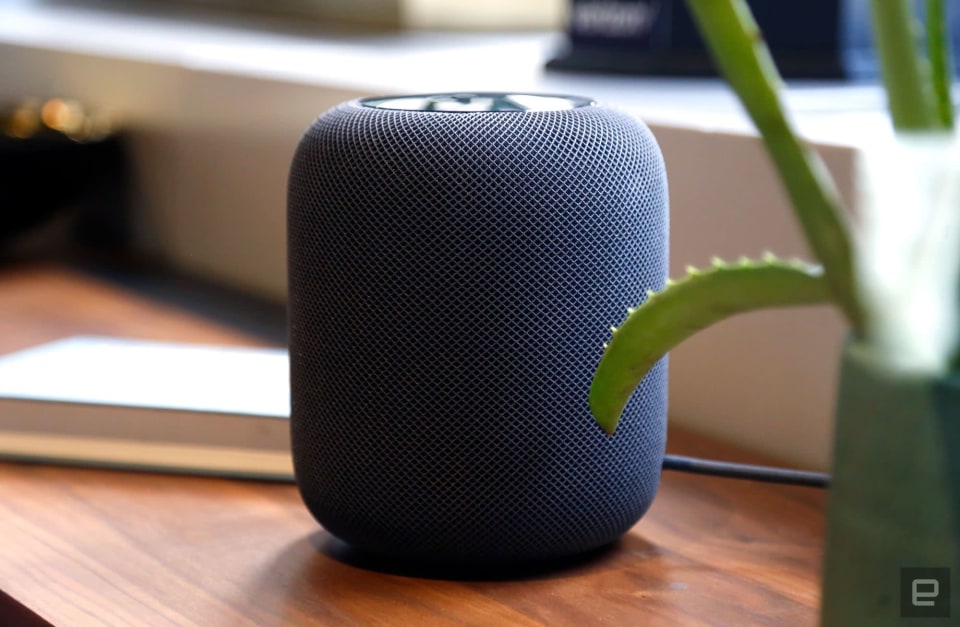 A report from Bloomberg earlier this week claimed that Apple's HomePod isn't doing so well, and that the company cut orders for new hardware from suppliers. This might not shock some of you: Apple missed the all-important holiday buying season and is competing with less expensive hardware from Google, Sonos and Amazon. But is the first smart speaker with Siri already a failure, or does the HomePod simply need time to find its place? I'm not in any way surprised that the HomePod has fizzled, simply because it's a weird product with a very weird proposition. I seriously considered buying it in the run-up to its launch, but ultimately couldn't find a strong enough reason to plunk down $350.

(Has an Apple HomePod and Google Home; uses his TV's built-in speakers.)

Apple's sales pitch was pretty brief: This is a fantastic-sounding speaker and it works with your iPhone and with Siri, a little. That's it. I have been using the HomePod since it launched -- and have never extensively listened to a speaker that sounds this good. (I'm already looking forward to readers' thoughts on this, but suffice to say I'm not alone in praising the HomePod in this regard.)

Dan: Yeah, but if I'm spending that much on a product, I don't want to use it with one hand tied behind my back, so to speak. Especially in a world where Google and Amazon are regularly pushing the limits of what's possible with smart speakers. Which is a shame, as you say, Mat, because many audiophiles say the HomePod outclasses hardware twice the price. But, unfortunately, quality alone doesn't make something a must-purchase, no matter how much it'll shame your friends with thousand-dollar Sonos setups.

Mat: I have a Google Home speaker, and it can do so much more, voice assistant-wise, than the HomePod. I've talked before about how much I prefer Google Assistant over Amazon's Alexa, and while this hasn't changed, both of these rivals are selling cheaper smart speakers that are more capable, even if they don't sound nearly as good as Apple's new speaker. All the problems Chris mentioned in his review are major ones that need addressing.

Dan: For me, it's Apple's refusal to compromise on the practical things that kills any reason for me to buy the HomePod, despite being a fully paid-up Apple fanboy. I'd love, for instance, to use the HomePod with Spotify like I do with the Google Home Mini. Or, even better, use an optical-in connection to connect it to my TV and use it as my home's primary speaker. The same product with one tiny concession to the real world would be a much more popular product, for sure. And don't get me started on the lack of Bluetooth. You can argue that even with AptX it's lower quality audio, but its omission is a raised middle finger to everyone.

Mat: Yeah, why no Bluetooth? I consider that the wireless version of dismissing the 3.5mm headphone jack on the iPhone. It has Bluetooth 5.0 in there somewhere, and it's not as if space is at a huge premium when it comes to a plug-speaker that sits on your shelf. (Don't forget the coaster.) It's makes other speaker systems and soundbars a smarter purchase, and if the HomePod worked with my TV, PS4 and PC, I would buy a second one for that long-promised stereo functionality. I'm optimistic that Apple will deliver enough in terms of software, both in regard to Siri and compatibility. It needs it soon, though.

Dan: Let's talk about the fact that you're now locked into that ecosystem, so if something happens to Apple's music business in the future, you're screwed. The trick to not getting burned is to never, ever, fully commit to anything if you don't have an escape plan.

Mat: Who hurt you, Dan? Yes, I have to use Apple Music on the HomePod, but there's always AirPlay. Worst case scenario: I can play Spotify on the HomePod -- I just need to do it through an iPhone or MacBook. Apple loaned me a speaker at a time when I was weighing up Spotify and Apple Music. I was halfway through my free trial with the latter, and was already being charmed away from almost five years of Spotify use.

Dan: Hah, who hurt me? I mean, how many times has Taylor Swift pulled her catalog of music from a streaming service? (Okay, once, but the point still stands: If TayTay quit Apple Music tomorrow, you'd be left with a very expensive speaker that just lost half its utility for your favorite singer.) As someone who similarly dithered, I'm curious as to why you decided to go with Apple. Mat: Broader music choice was the main decider. I have a Japanese music itch that needs scratching occasionally, and Apple Music does a better job than Spotify. Also, the recommendations and curation on Apple is superior, at least to me. Spotify is great when you know what you're looking for -- and it stocks it. Apple is introducing me to (gasp) new music. Or really old hits from 1952, and I have no complaints about that. Now we're debating Apple Music, rather than the HomePod.

Dan: It's natural, really, to talk about Apple Music as being hand-in-glove with HomePod because one doesn't really work without the other. It relegates a $350 speaker into being little more than a gussied-up accessory for a music streaming service. I've got my own personal beef with Siri anyway, which is that she barely understands a word I say when I use it on the iPhone. And, I'm sure you will attest to this, I have a clear, fairly region-less British accent that should make me the ideal Siri user. But this constant failure is a key reason that I'd steer clear of the HomePod: There's no point owning a Siri speaker if the voice assistant itself is crap. I do, however, remain hopeful that the recruitment of John Giannandrea from Google will fix this.

Mat: Like I've lauded Apple Music for, Siri is pretty on-point with playlists to match my vague requests of chill, or high energy playlists. Also worth noting, Dan, that due to the six embedded mics, the HomePod is much better at picking up your Siri demands than the iPhone, and works two walls away from my kitchen to my lounge. And yes, you do have a very clear accent.

Mat: Now, having relatively praised it, Siri needs much more work if Apple wants it compared with Google and Amazon's voice assistants -- especially when early adopters are heavily scrutinizing the smart speaker options out there. This lukewarm start shouldn't be taken as a sign of utter failure, though. We saw similar reports in the nascent days of the Apple Watch: It wasn't selling at the grand scale of iPhones, it was a flop, etc. But the Apple Watch is still here, shaping itself into something pretty different to what first appeared in late 2014.

Dan: I completely agree with you that nobody at Apple is going to be losing sleep over the HomePod's current sales. Much like the Watch and, to a lesser extent, the TV, will tick along selling a million or so units a quarter until many own one, almost without realizing it. And as Apple Music grows its audience, so will the number of people who want the HomePod. Mat: So it's the long game. And that's fine for people who will buy the HomePod in 2019, but I can see how the sluggishness will put off current owners and prospective buyers. The launch was delayed; Siri is still weak and I'm still waiting for (at least the temptation of) stereo HomePods. Having said that, my obscure Final Fantasy acoustic soundtracks and early-2000s pop have never sound better.

Dan: I'm not gonna comment on the Final Fantasy point, but it's clear that the HomePod has crawled out of the gate rather than sprinted. If you're spending $350 on a piece of home audio gear, you're expecting a certain level of quality, especially from Apple. And yet in many respects it's still a half-finished product that lacks the basic functionality found in rival devices. And that means that the sales pitch goes from "a fantastic sounding speaker that works with your iPhone" to "Well, it sounds great, but...".

In this article: apple, av, editorial, entertainment, gadgetry, gadgets, gear, homepod, siri, smartspeaker
All products recommended by Engadget are selected by our editorial team, independent of our parent company. Some of our stories include affiliate links. If you buy something through one of these links, we may earn an affiliate commission.