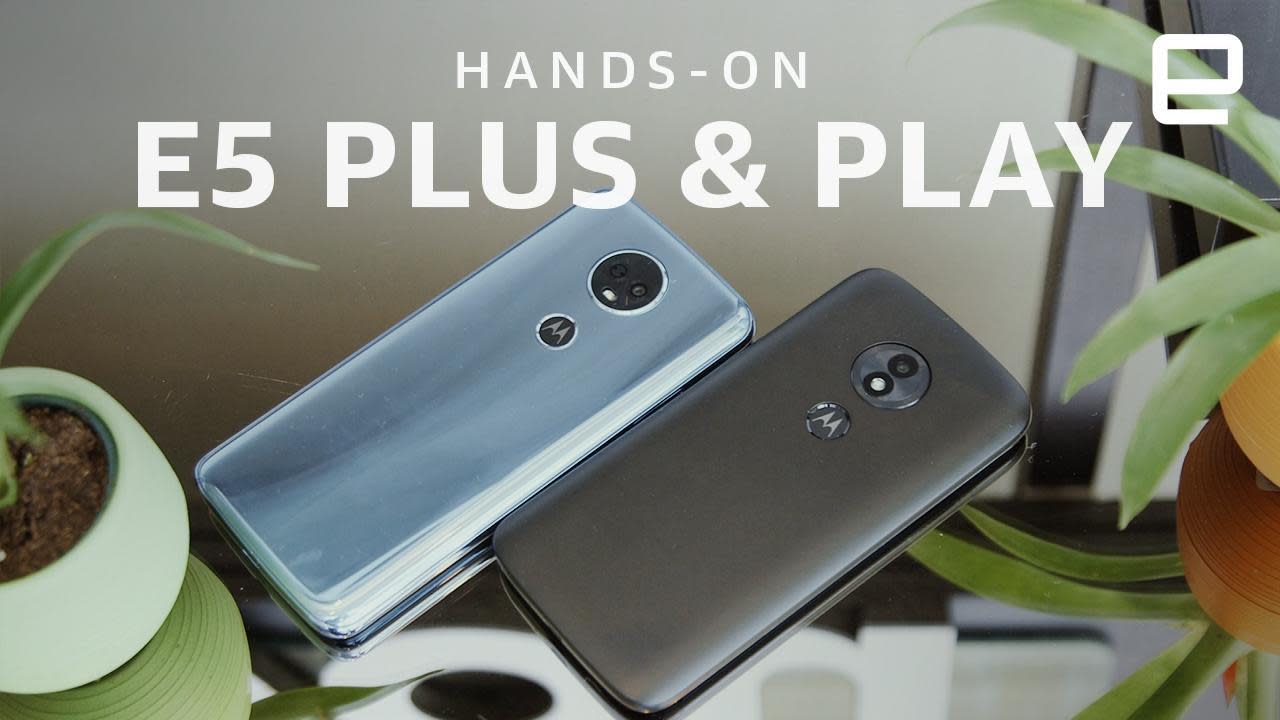 Ever since their debut in 2014, Motorola's Moto E series phones have garnered a very specific reputation: they're decently competent and very, very cheap. With the new Moto E5 Plus, though, Motorola has decided to fiddle with the formula in some interesting ways. It's easily the most premium Moto E the company has ever made, a fact made more apparent when you compare the E5 Plus to its less powerful sibling, the new Moto E5 Play. In some respects, The E5 Plus even outclasses the more modest of the two new Moto Gs announced today. It's clear that the role of the Moto E line is shifting, but after some hands-on time, I think Motorola might be onto something here.

A quick note before we go any further: Motorola hasn't discussed official US prices for either of these phones, leaving that task to the carriers and retailers that'll sell them. Considering that the price tag is usually one of the Moto E's standout features, it's unfortunate Motorola decided not to share that info ahead of time — I'll update this story once new information becomes available.

The first thing you'll notice about the E5 Plus is its size — this is a big phone. Part of that is because Motorola went with a 6-inch, 18:9 LCD screen that occupies almost all of the phone's face. For those keeping count, that's the biggest screen ever used in a Moto E phone — it even edges out the not-for-US Moto G6 Plus's 5.9-inch screen — and in general, colors were vivid and viewing angles were solid. The panel itself only runs at 1,440x720 — an obvious concession to keep the price down — but even now, 720p still offers a decent amount of clarity and detail. The other reason the phone is so large is because of its battery: there's a 5,000mAh cell tucked away in there, and that's the largest we've seen in a mainstream smartphone for a long time. (Just a reminder: the Moto G6 Play also announced today only has a 4,000mAh battery.) Despite being a big beefy phone in all dimensions, the E5 Plus is wrapped in a glossy plastic that evokes a sense of cohesiveness with the rest of Moto's new phones and feels awfully nice to hold. Tucked away inside is one of Qualcomm's Snapdragon 435 chipsets with 3GB of RAM and 32GB of storage (though you can bump that total up with a microSD card). We'll need to spend more time with the phone before we can pass any real verdicts on performance, but the E5 Plus certainly won't blow you away — what else would you expect from a phone that should sell for around $200? That said, it had no trouble whipping through apps and playing videos, so users with modest needs probably won't need to fret much.

The E5 Plus isn't making its journey to the US alone — there's also an E5 Play model that feels much more like one of the company's traditional cheap phones. Unassuming plastic back? Check. Smaller, less impressive screen? Check — it's 5.2 inches diagonal LCD running at 720p. The camera around back is a purely passable 12-megapixel affair.

To be clear, there are some nice touches here, too. There's a fingerprint sensor mounted in the Moto logo dimple on the phone's back, and Motorola's Moto Actions make what would otherwise be a clean build of Android 8.0 Oreo feel a little more thoughtful and capable. Again, the performance being squeezed out of its Snapdragon 425 (or 427, depending on where you get your phone) and the 2GB of RAM onboard is adequate at best, but that just's par for the course for these things.

Ultimately, Motorola has churned out one highly impressive Moto E and another cheaper, more traditional model. Having more choice definitely isn't a bad thing when it comes to smartphones, but I do find my concerned that Motorola might be harming its own chances by blurring the once-firm lines between the Moto G and E series. Right off the bat, I'd personally splurge on an E5 Plus than a G6 Play, and while we're still not sure about prices, their respective spec sheets hint that they'll probably be pretty close. That raises a question about whether Moto really needs a cheap phone portfolio this broad in the US, but hey, for now I'm willing to see how things go.

Update: Both the E5 and E5 Plus are launching in the UK in early June starting at £119 and £149, respectively.

In this article: e5plus, gear, hands-on, mobile, motoe5plus, motorola
All products recommended by Engadget are selected by our editorial team, independent of our parent company. Some of our stories include affiliate links. If you buy something through one of these links, we may earn an affiliate commission.