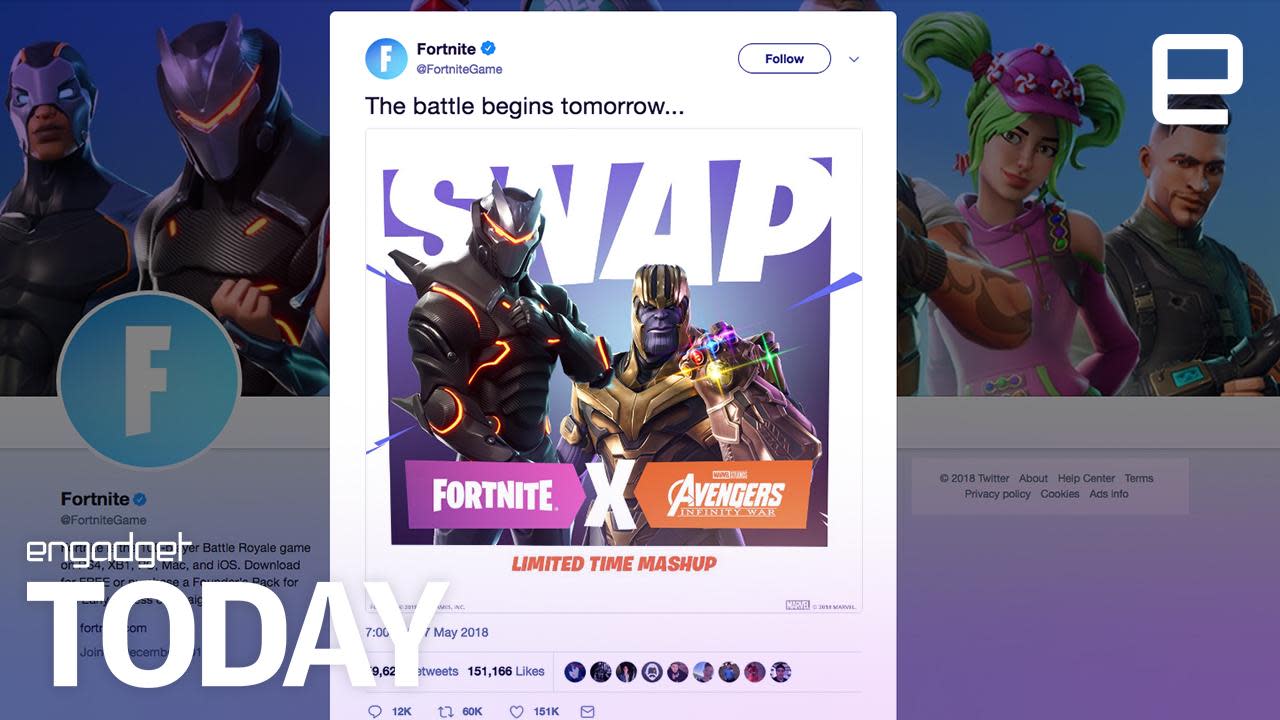 If you thought Avengers: Infinity War was the ultimate pop-culture mashup, the Marvel Cinematic Universe has another cameo up its sleeve. Franchise villain Thanos will make a limited appearance in Fortnite: Battle Royale starting May 8th, according to Entertainment Weekly.

From the sounds of it, matches will play out like normal. And because average game length is around 20 minutes, it should take considerably less time to see Thanos in-game than it did catching up on the MCU ahead of your first Infinity War viewing. A hundred heroes each with their own movie series players battle it out to be the last one standing, but the difference during this event is that the Infinity Gauntlet resides somewhere on the map. Should you find it, you'll transform into Thanos and "wield all the power that comes with him."

So, the ability to reduce adults to tears after killing off characters they've adored for almost a decade, spawn multiple memes and rake in huge box office grosses. Got it. Has anyone heard from PlayerUnkown's Battlegrounds creator Brendan Greene in awhile? If not, there's a chance he's searching for the Infinity Gauntlet to transport himself into a reality where PUBG is still king of battle royale.

In this article: android, AOLoriginals, DailyShow, Engadget, EngadgetToday, EngadgetVideo, entertainment, fortnite, FortniteBattleRoyale, gaming, infinitygauntlet, internet, ios, pc, pcgaming, playstation, playstation4, ps4, thanos, xbox, xboxone, hidden:vv_3x4:0078aba7-f561-3839-a758-7179e91492b0, hidden:vv_16x09:fcc2df2e-7f10-3c5e-a507-90a8b60ee681
All products recommended by Engadget are selected by our editorial team, independent of our parent company. Some of our stories include affiliate links. If you buy something through one of these links, we may earn an affiliate commission.