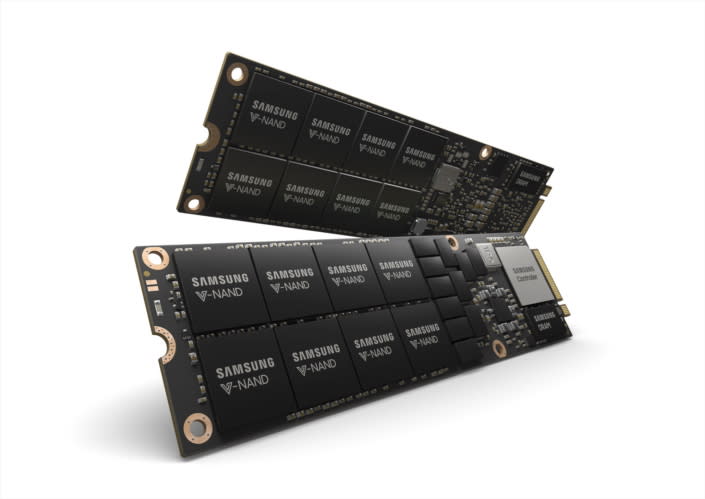 Data centers are about to get a lot more storage efficient. Samsung has launched the industry's highest capacity NVMe solid state drive (SSD) that packs an 8TB punch in an ultra-small footprint of just 11cm x 3.05cm -- twice the capacity of SSDs commonly used in hyper-scale server designs and slim line laptops.

The new SSD is built with 16 of Samsung's 512GB NAND packages, each stacked in 16 layers of 256 gigabit 3-bit V-NAND chips (designed with massive SSDs in mind), to achieve the 8TB density. This is expected to triple the system density in existing server infrastructure, and will allow for an eye-watering 576TB of storage space in 2U rack servers.

The SSD delivers read speeds of 3,100MB/s and write speeds of 2,000MB/s -- five and three times the speeds of typical SATA SSDs, respectively -- and could enable enterprise server systems to perform more than one million IOPS in a 2U rack space. This all adds up to a significant return on investment for next-gen large-scale data centers -- which is set to get even more attractive as Samsung plans to release a 512 gigabit version of the 3-bit V-NAND-based SSD later this year, enabling even faster processing for big data applications.

In this article: business, datacenter, drive, FormFactor, gadgetry, gadgets, gear, NF1, personal computing, personalcomputing, samsung, servers, services, SSD, storage
All products recommended by Engadget are selected by our editorial team, independent of our parent company. Some of our stories include affiliate links. If you buy something through one of these links, we may earn an affiliate commission.