Its "opto-mechanical" keys sound cool, but will you really notice the difference?

Gaming keyboards are starting to look and feel very similar. Matte black chassis, LED lighting and advanced customization suites are pretty much standard. To distinguish themselves new arrivals have had pack more features into their decks and Razer's no exception, adding things like waterproofing and even building its own key switches. The latter not only reduces its dependency on outside companies like Cherry for parts, but it also lets the company customize its products for different users' needs: Some of its keys give you a bit of kick when you press them while others are smooth, and you can also choose between clicky and silent.

But the keys were always mechanical, because that's the gold standard for a responsive keyboard. Now Razer's decided to go in a different direction with its newest keyboards, the Huntsman and Huntsman Elite. These two new decks still have some mechanical parts, but now they're combined with an optical sensor that Razer feels will make this new deck even more responsive.

Razer calls them "opto-mechanical" keys. What that means is that they're still largely mechanical on top with purple plastic bits and a metal hinge, but the point of actuation down below — the part where the signal gets sent to your computer — is a beam of light. Pressing the key down blocks that beam, indicating to your computer that a button has been pressed. In theory, not having to wait for some kind of physical activation should make it faster than standard mechanical switches, but honestly, I didn't notice the difference.

I still had to push the key down until I felt a click and saw the keypress register, unlike Corsair's K70 Rapidfire and its Cherry MX Speed keys, which I sometimes found myself accidentally activating if my fingers or palm brushed over a key a little too heavily. Razer promises a 1.5mm actuation in comparison to the Rapidfire's 1.2mm actuation, but in the middle of a tense match you probably aren't being so delicate you'd notice the 0.3mm difference. One difference you'll definitely notice is the clicks and clacks of the Huntsman. It's loud. Some noise is to be expected, of course, because it still employs some mechanical bits. But there's a distinct difference from Razer's green "tactile and clicky" keys that's somewhat grating. The green keys give a quick snap when depressed, with a slight jiggle if you listen closely. With the Huntsman you don't have to listen that closely. Each click is higher pitched with a sort of metallic echo that follows it and a faint scratching sound. While I don't believe it's actually louder, it is more annoying and has left me apologizing to my coworkers constantly.

When I'm not hammering away on it, the Huntsman is actually rather unassuming and doesn't outwardly scream "gaming keyboard." Yes, it's equipped with Razer's Chroma system, with each key lit by a color-changing LED that can be customized through software. But it's different in some small ways. Other Razer decks have wedge-shaped corners and edges that slope downward. The Huntsman embraces round corners and thin edges, which makes it seem a little more office-friendly even if it's noisy. It looks a lot like Logitech's G413 keyboard, which I've been using as my daily driver for the past year or so. 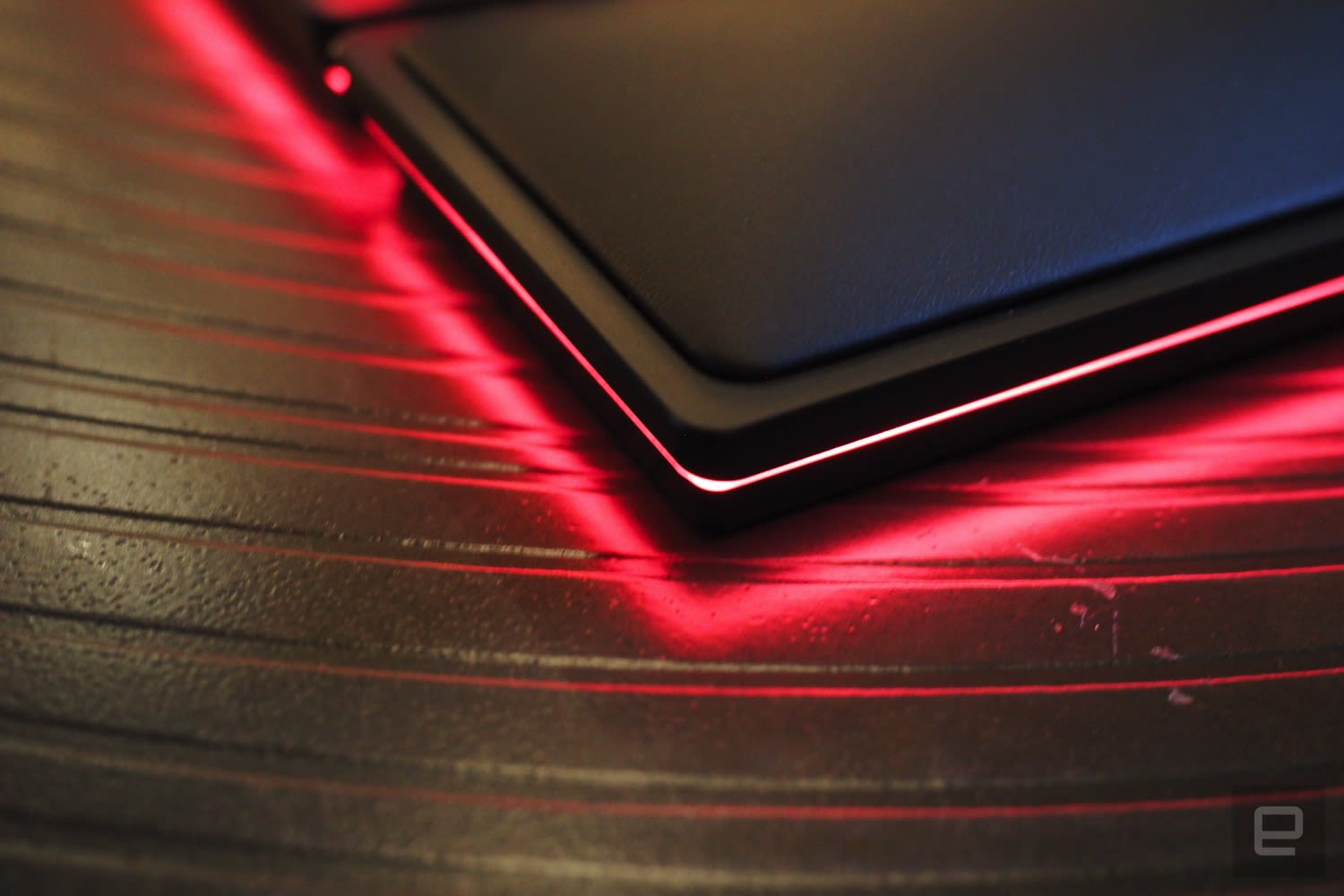 If you upgrade to the pricier Huntsman Elite, there are two striking physical differences from the both the regular Huntsman and Logitech's G413. For one, the media controls have a large dial for controlling the volume in addition to dedicated buttons. Media controls are increasingly feeling like a must for me when it comes to gaming keyboards, so I found them extremely welcome. I'm not a big wrist rest person, but I can at least say it's a nice bit of kit with a flatter profile than those on other gaming decks. It attaches to the keyboard via a set of magnetic pins, which allow it to also glow with the Chroma lighting. It's a small thing but the thin colored line just makes it feel so much swanker and well put-together.

I don't begrudge Razer for trying something new with the opto-mechanical switches, but as a first test the Huntsman is very underwhelming. Still, there are some (literal) bright spots: The new design is very nice with really well-done media buttons. And the wrist rest's lighting will definitely impress. But these are both features on the $200 Huntsman Elite, not the regular $150 model. Corsair's K95 is also $200 and, while its wrist rest doesn't glow, it includes a set of macro keys, which are likely more valuable to hardcore gamers. Corsair's K65 is only $140 and includes a wrist rest but not macro keys. And don't forget Logitech's lineup of mechanical keyboards as well, available with both clicky and linear keys for under $100. There are just so many other great options right now and, while the Huntsman and Huntsman Elite stand out, they don't stand out in the ways that will ultimately matter to gamers.