Microsoft's $399 Surface Go is its smallest tablet yet

It’s more than a follow-up to the Surface 3.

It's easy to think that Microsoft has given up on small tablets. In the three years since the release of the Surface 3, its last inexpensive iPad competitor, Microsoft shifted its attention towards larger and more powerful devices like the Surface Pro; the pro-grade Surface Book 2; and the traditional Surface Laptop. Along the way, the company even managed to rethink all-in-one desktops and collaboration displays. But it turns out Microsoft hasn't forgotten about smaller slates -- it was just developing one that could truly stand out. Enter the $399 Surface Go, the company's smallest and cheapest 10-inch tablet.

The Go weighs just 1.15-pounds -- a quarter of a pound lighter than the Surface 3, and a tad heavier than the 1.03-pound iPad. While that's not a huge size improvement, it's enough to make the Go feel more like a typical tablet, instead of a slightly smaller Windows PC. During a brief product demonstration in New York City, a Microsoft representative genuinely surprised me by pulling the 8.3mm thin Go out of her slim purse. It was almost like a magic trick -- it didn't look like there was anything in her purse at first. That goes to show what Microsoft is aiming for with the Surface Go: It wants to deliver a machine that'll simply disappear as you carry it throughout the day.

At first, it's difficult to tell that the Go is actually a new member of the Surface family. It doesn't look that much different than the Surface 3. But get up close and you'll notice the changes. The 10-inch screen is almost a full inch smaller. And you'll definitely notice how much lighter it is once you pick it up. Overall, though, Microsoft hasn't changed up much with the Surface aesthetic. The Go's screen still has a 3:2 aspect ratio, which is a bit taller than typical 16x9 displays. And of course, there's the iconic kickstand, which can be opened up a full 165 degrees. 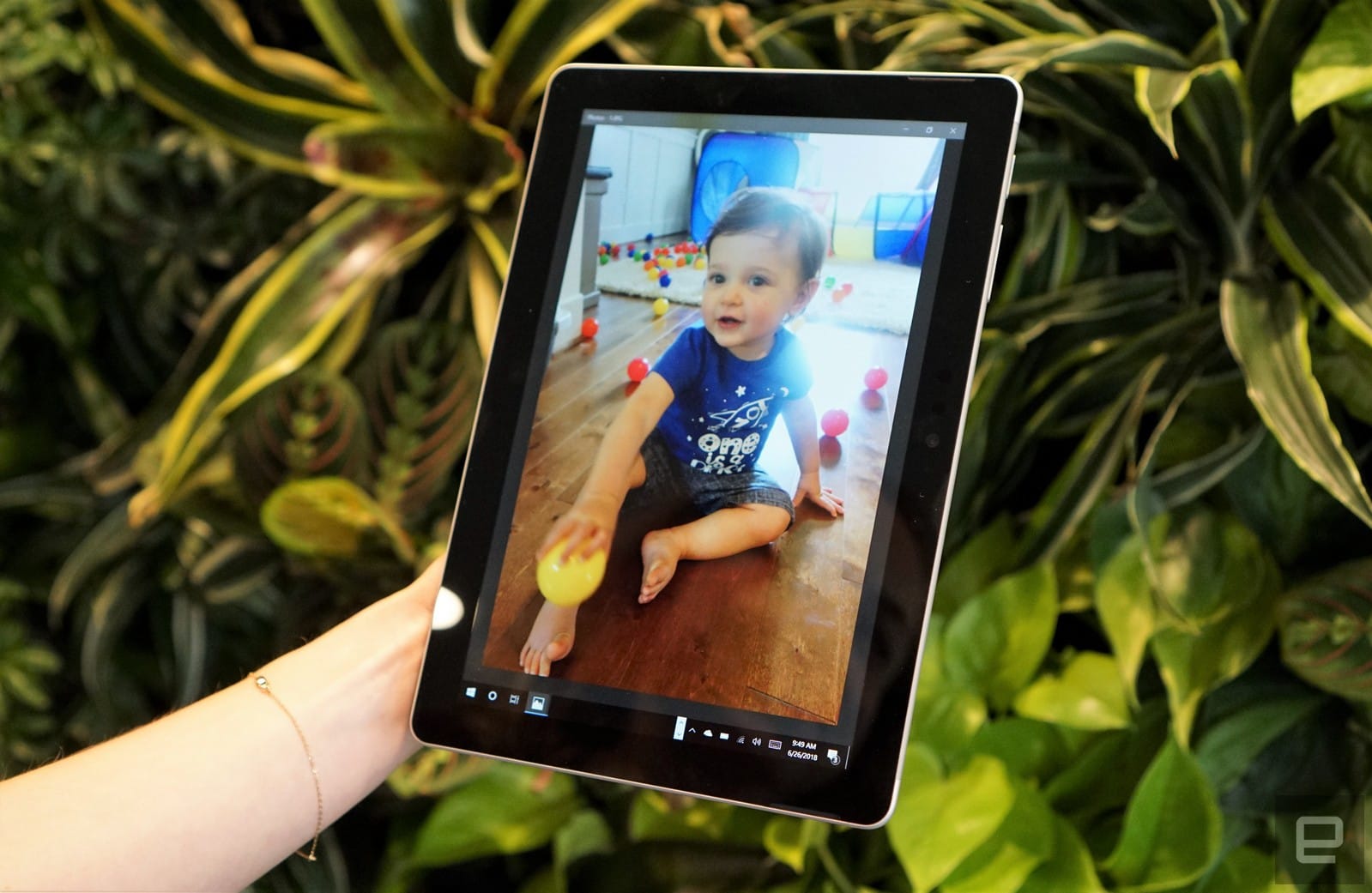 Unfortunately, the Go also retains the Surface line's large screen bezels, which reps claim make it easier to hold as a tablet. That may be true, but it also looks dated in this era of thin bezel laptops and tablets like the iPad Pro.

The Surface Go is powered by a dual-core, four-thread Intel Pentium Gold 4415Y processor. Microsoft claims it's around 30 percent faster than the Surface 3's quad-core Atom. That's a curious choice of CPU, especially since it's a seventh-generation Intel chip, and not one from this current generation. But it makes sense with how Microsoft is positioning the Go. This isn't a high-end machine. Instead, it's more of a secondary device that you can use when you're away from your more powerful computer.

You can choose from either 4GB of RAM and 64GB eMMC storage to start, or 8GB of RAM and a 128GB SSD for $549. There's also an LTE version coming later this year, as well as a variant with a 256GB SSD. And, as usual, there's a microSD card slot tucked underneath the kickstand, which lets you expand the storage. Another notable feature: the tablet includes USB-C, alongside the proprietary Surface power connection.

The Surface Go will ship with Windows 10 S mode for consumers (which you can switch to standard Windows 10 easily), and Windows 10 Pro for commercial users. IT admins can also configure those machines to run in S mode, if they want. 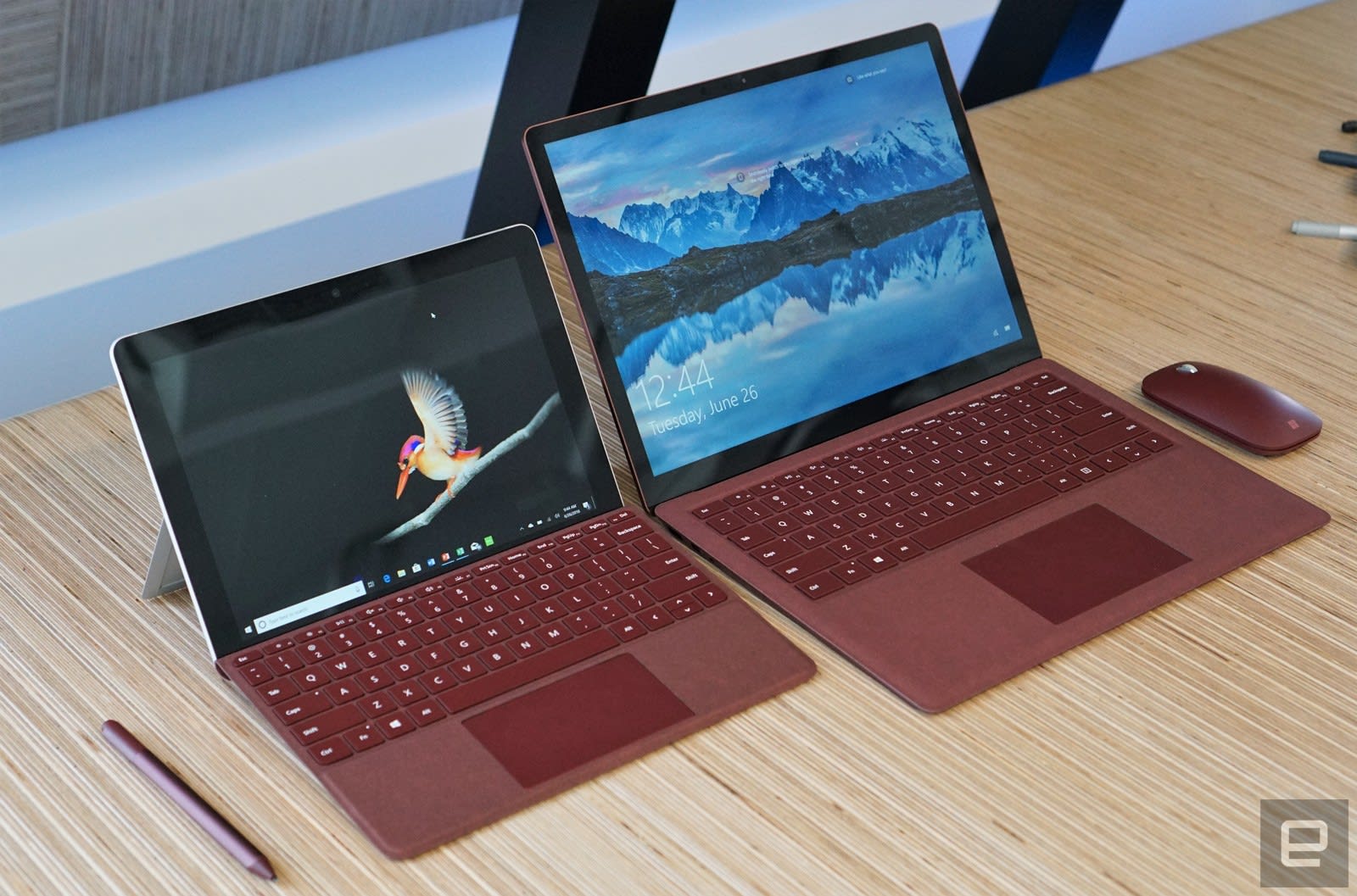 The Surface Go (left) alongside the Surface Laptop (right).

And what of the keyboard? Since the Go is a completely different size than past models, Microsoft had to design an entirely new Type Cover. And, unfortunately, it's once again sold separately for $99. You could also step up to the more premium Alcantara version for $129 -- that's the same cloth-like material used on the Surface Laptop and the Surface Pro's keyboards.

Based on my brief time with it, the Surface Go's Type Cover feels just as comfortable as its larger siblings. And instead of being completely flat, every key is slightly curved in the middle, making it easier for your fingers to hit them. The trackpad, meanwhile, is surprisingly large, smooth to the touch and responsive. The Type Cover adds another 0.5 pounds to the Go's weight, but the combined system still feels light and easy to hold.

As you'd expect, the Go also supports Microsoft's $90 Surface Pen, which is also sold separately. Additionally, there's the new $35 Surface Mobile Mouse, a cheaper alternative to the $80 Surface Arc Mouse. It's comfortable to use, but you can tell it's an inexpensive mouse, thanks to its plastic case.

While the Go isn't the dual-screen, pocket-sized Surface I've been longing for (though Microsoft is rumored to be working on that), it's an intriguing step forward for Microsoft. It's a tiny machine that'll let you do just about everything you could with your normal Windows PCs, save for playing games. And while Apple is focused on similar portable productivity with the more expensive iPad Pro, it's paying less attention to the standard iPad. That leaves the door open for Microsoft to truly innovate with a $500 system (including the Surface Go and its keyboard). I wouldn't be surprised to see Microsoft take this case, throw in a Snapdragon processor with integrated LTE, and finally deliver a killer Always Connected PC.

The Surface Go is available to pre-order today in the US, Canada and other markets. You can expect to see it in stores on August 2nd.