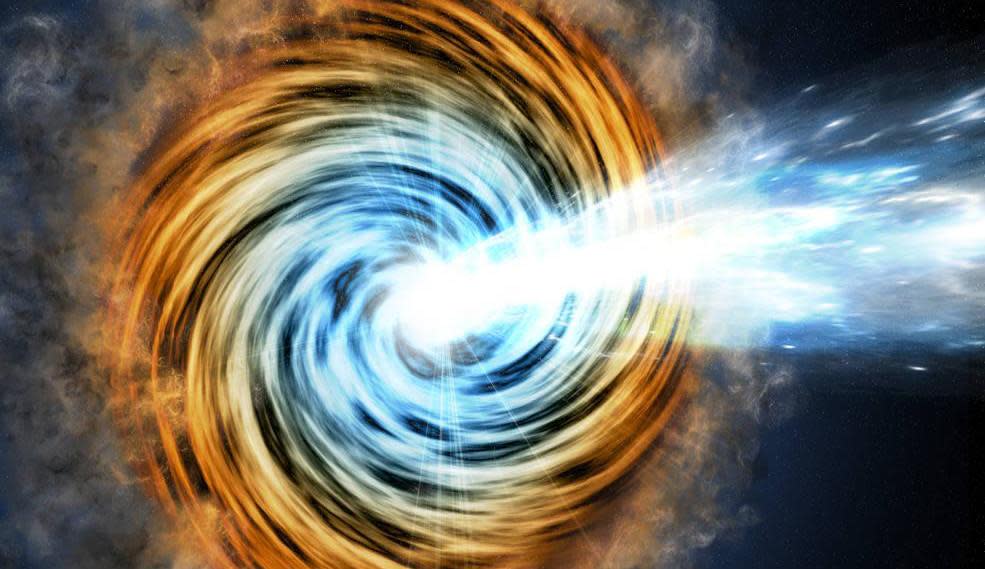 This week, the National Science Foundation announced a groundbreaking discovery that provides answers to a question scientists have been asking for decades. A team at the NSF IceCube Neutrino Observatory at the Amundsen-Scott South Pole Station was able to trace the source of high-energy cosmic rays to their source: a blazar, which is a galaxy center that produces massive particle jets, powered by a supermassive black hole.

Cosmic rays are energetic particles radiation that travel at nearly the speed of light and bombard the Earth. We know they originate outside our galaxy, but because they are deflected along the way, it's been impossible to trace their source. It's a puzzle scientists have been trying to solve since the discovery of cosmic rays in 1912.

Enter neutrinos. These cosmic particles are uncharged, unlike cosmic rays. As a result, they aren't deflected or impacted by magnetic fields; they pass through the Earth rather than slamming into the planet's atmosphere. Cosmic rays and neutrinos likely originate from the same source, and neutrinos can be traced. That's how scientists used a neutrino detector to figure out that the blazar TXS 0506+056 was sending out cosmic neutrinos and cosmic rays.

This discovery is exciting for many reasons; not only does it help understand the universe around us and where we come from, but it also is the beginning of an entirely new field of study. "This identification launches the new field of high-energy neutrino astronomy, which we expect will yield exciting breakthroughs in our understanding of the universe and fundamental physics, including how and where these ultra-high-energy particles are produced," said Doug Cowen, professor of physics and astronomy and astrophysics at Penn State University and coauthor of the article published in Science, in a release.

There's still a lot of work to do from here; scientists must figure out why this particular blazar is sending out neutrinos and cosmic rays. Is this characteristic of blazars, or is there something special that is required? As much as this is an answer to a long-standing question, it's also the beginning of an entirely new type of study of the cosmos.

In this article: blackhole, blazar, cosmicrays, neutrinos, space, supermassiveblackhole, tomorrow
All products recommended by Engadget are selected by our editorial team, independent of our parent company. Some of our stories include affiliate links. If you buy something through one of these links, we may earn an affiliate commission.