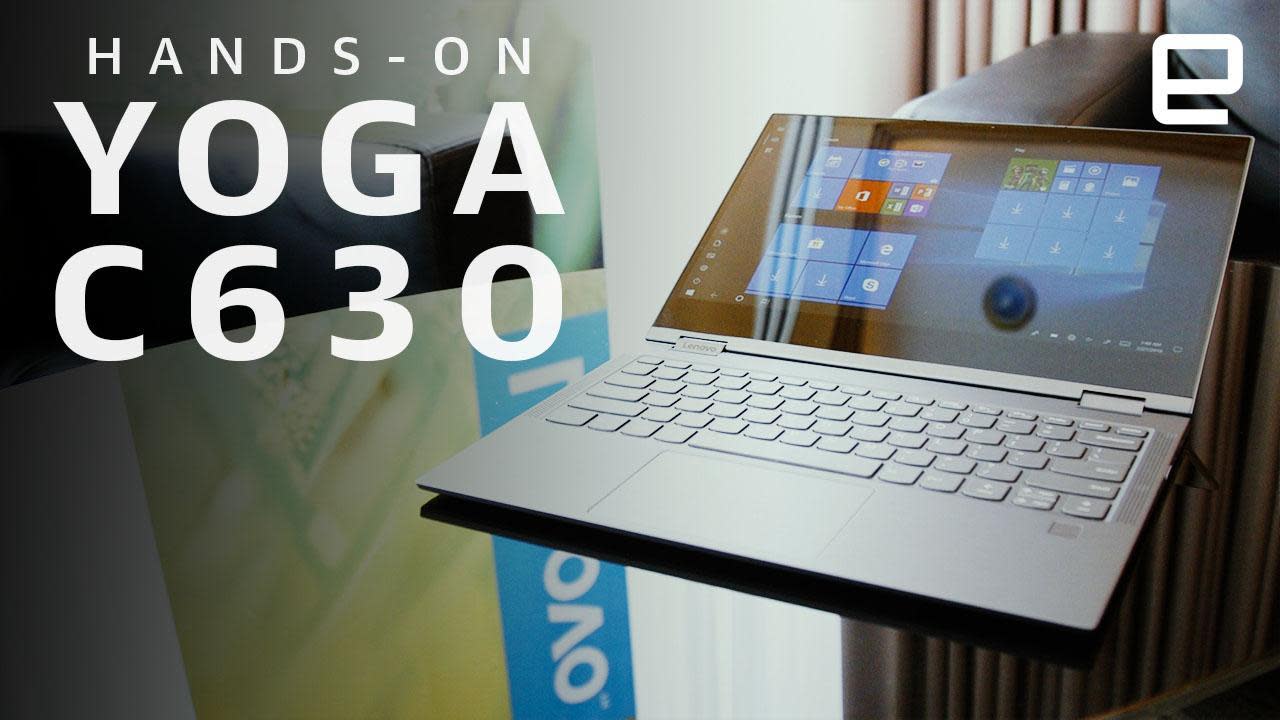 Qualcomm promised faster, longer-lasting computers when it launched the Snapdragon 850 at Computex earlier this year, but it didn't have any actual devices to announce then. Turns out we just had to wait a few more months to see them. Here at IFA, Lenovo is showing off the industry's first device to use the made-for-PCs mobile chipset: the Yoga C630 WOS (which stands for Windows on Snapdragon).

This is the computer maker's second Snapdragon-powered PC, following the Miix 630, which launched at CES. While that was a detachable and therefore more portable unit, the Yoga C630 is a convertible 13-inch laptop with sturdy hinges, a comfy, full-size keyboard and a roomy, responsive trackpad. It features the same aesthetic found across Lenovo's premium Yoga lineup, with rounded corners on the back and stepped hinges that make gripping the C630 in various modes easier. When I flipped the screen all the way around to use the device like a giant tablet, for example, the slightly sloping edges gave me something to hold on to instead of having to touch the screen.

Speaking of, the full HD display was clear and easy to read during my hands-on, though I wish it were a bit brighter. A sharper resolution might have been nice too, though that might have come at the expense of battery life, something Qualcomm emphasizes is a highlight of WOS. The Yoga C630 is supposed to last about 25 hours of continuous local video playback, which should be enough to last through an entire day of running around attending business meetings. That endurance is thanks in large part to the Snapdragon 850, which promises not only 25 percent longer battery life than the 835 but also 30 percent faster performance. When I opened a slew of apps like Excel, PowerPoint, Maps and Edge on the Yoga C630's desktop environment, I barely encountered any delay. Any interruptions I saw were related to WiFi troubles rather than actual performance.

If you're familiar with the Windows on Snapdragon category, then you already know almost everything else about the Yoga C630. It has a SIM card slot so you can make use of the onboard Snapdragon X20 LTE radio to get up to 1.2Gbps speeds wherever you go (depending on your carrier's network performance, of course). Qualcomm also likes to remind you that the Windows on Snapdragon platform is "always on." That is, its PCs wake up from sleep almost instantly. I had to wait a second or two for the Yoga C630 to turn on after I hit a key, though it's still faster than most laptops released before 2018.

The Yoga C630 is very similar to the ASUS NovaGo, which went on sale earlier this year. They're both full-fledged laptops with 13-inch full HD displays, running Windows on Snapdragon. Lenovo's system uses a more powerful chipset and has two USB-C ports, while the ASUS has none. However, the NovaGo is $250 cheaper and has eSIM embedded so it can offer LTE data without physical cards in the future.

I like the Yoga C630's slick yet understated aesthetic, although I'm not sure if I'd be willing to shell out $850 to buy it when it arrives in November. It'll really boil down to whether the battery and performance claims prove to be true in the real world, and I can only wait till we get a review unit to test that. Meanwhile, Samsung is also making a PC with the Snapdragon 850, so there might be reason to wait before you make a move.

In this article: gadgetry, gadgets, gear, ifa2018, laptops, lenovo, microsoft, notebook, personal computing, personalcomputing
All products recommended by Engadget are selected by our editorial team, independent of our parent company. Some of our stories include affiliate links. If you buy something through one of these links, we may earn an affiliate commission.