The Snapdragon 850 is Qualcomm's first chip built for Windows PCs

Qualcomm has developed a hobby. It's been building specialized chips for the Internet of Things and VR headsets lately, in addition to its smartphone-focused and wearable products. Today at Computex 2018 in Taiwan, the company unveiled the Snapdragon 850 -- a processor designed specifically for Windows devices. The chip is supposed to drive a new generation of Windows on Snapdragon devices around this holiday season, made by Qualcomm's numerous partners. In fact, Samsung announced today that it will be making a 2-in-1 PC powered by the Snapdragon 850.

So how is a made-for-PC chipset different from one for a phone? Not much, really. Since the Snapdragon 850 is meant to be used in devices bigger than a smartphone (like laptops and convertibles), it can run at higher clock speeds without overheating. The extra space in larger chasses allows for better dissipation. Thanks to the faster 2.96GHz clock speed (among other tweaks), the Snapdragon 850 is about 30 percent faster than the 835.

Qualcomm also optimized the Snapdragon 850's frequencies and software for PCs, but the processor's 10nm architecture is largely similar to the 835. These improvements led to noticeably quicker performance on a reference device armed with an 850, compared to the Snapdragon 835-powered laptops I've tested so far. I lightly edited a webcam-taken picture on Adobe Photoshop, and the system was surprisingly smooth and responsive. On the ASUS NovaGo, which I reviewed earlier this year, running Photoshop was possible but unstable.

I also enjoyed playing a couple rounds of 64-bit game Vendetta on the device. Since Microsoft launched 64-bit support for ARM-based PCs at Build this year, not many developers have gone to the trouble of recompiling their apps for the platform. VLC the video player was the first to do so, and Vendetta joins that list. While I wasn't blown away by the graphics on the reference device's 2K display, I was satisfied that there was no lag as I shot down several spaceships by jabbing repeatedly at the connected touchpad. If more developers recompile their apps for ARM 64, it could lead to faster performance on Windows on Snapdragon in general. 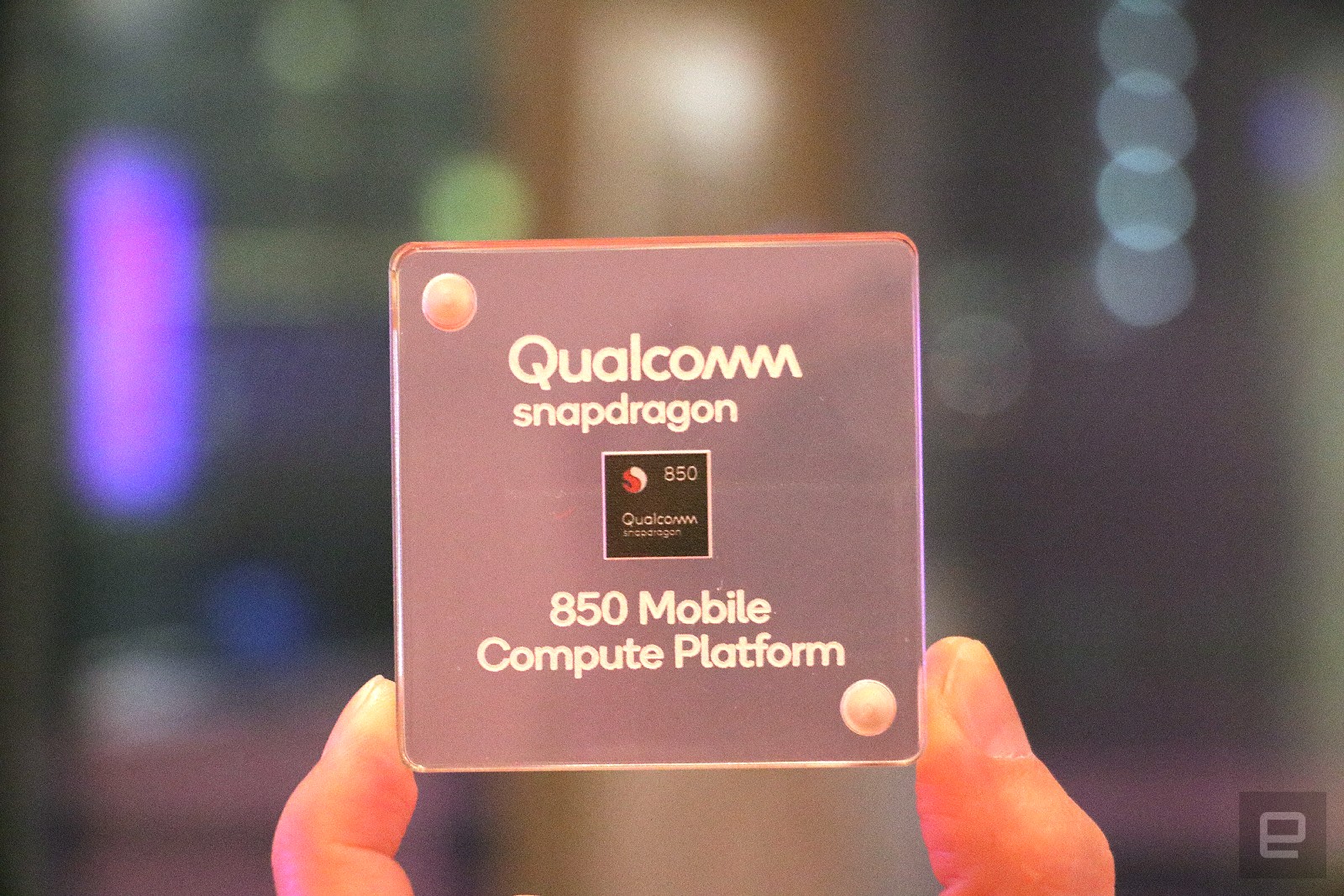 The Snapdragon 850 supports HDR displays and 4K capture through the onboard camera. While it seems ridiculous to use a laptop or tablet's camera to shoot in 4K, Qualcomm's senior director of product management Miguel Nunes told Engadget that he has seen that people want higher definition and quality to record things like training videos for video conferencing.

Qualcomm also included its X20 LTE modem on the Snapdragon 850, which it says will enable up to 1.2Gbps transfer speeds, and allow about "90 percent of operators to achieve gigabit LTE with LAA (License Assisted Access) technology." That could mean faster and more prevalent coverage for the Snapdragon-powered PCs.

In addition to all the features I've already described, the 850 is also supposed to last up to 25 hours, depending on your use. That's a lot longer than the 20 hours that the existing crop of connected PCs provide, which was already impressive. Granted, the NovaGo got less than 20 hours on our battery test, though, so that estimate might not match realworld results.

All told, Windows on Snapdragon remains an enticing platform. The Snapdragon 850, together with Microsoft's effort to natively support 64bit apps, could address some of the biggest existing problems around performance and compatibility.

All products recommended by Engadget are selected by our editorial team, independent of our parent company. Some of our stories include affiliate links. If you buy something through one of these links, we may earn an affiliate commission. All prices are correct at the time of publishing.
View All Comments
The Snapdragon 850 is Qualcomm's first chip built for Windows PCs