ZTE's next flagship phone fine-tunes video from any source

Vision is my favorite Avenger, and also the Axon 9 Pro's secret weapon.

It's been a crazy year for ZTE. It was lumped together with fellow Chinese tech giant Huawei in a Congressional bill in January that sought to ban government agencies from working with the pair, and again when US intelligence agencies warned users against buying devices from either. ZTE was later slammed with an export ban that prevented it from conducting business in America, and only recently came to a settlement agreement with the Commerce Department. The company is now under a ten-year probation period, and the ban has been suspended, just in time for ZTE to scramble to present a new phone at IFA 2018.

Amid all of this corporate drama, the company has managed to put together the Axon 9 Pro -- a long overdue update to the cult favorite Axon line of affordable flagships that audiophiles were enamored with. ZTE decided to focus on a different aspect of multimedia with its latest handset, introducing a system called Axon Vision designed to ensure rich, smooth visuals at all times. The Axon 9 Pro also packs several hardware upgrades that make it more contemporary (think: 18:9 screen aspect ratio and USB-C ports) in an inoffensive glass design. Unsurprisingly, the company won't be bringing the latest Axon stateside, but it'll arrive in Europe at the end of September for €649 (about US$759).

You'll be getting a respectable set of specs for the money -- a Snapdragon 845 processor, 6GB of RAM, 128GB of storage and a whopping 4,000mAh battery, to start. That's the same size cell as you'll find on the Galaxy Note 9, by the way, although I suspect ZTE's new display technology may cause some power drain.

Axon Vision is a combination of the 9 Pro's 6.21-inch AMOLED screen, an RGB sensor next to the front camera and a dedicated processor for the display, according to ZTE, and it does a few things. The most compelling of these is what the company calls a "Motion Video Optimization" feature, which pushes sharper, smoother video to your screen regardless of the source. Say you're watching a YouTube video at 24 frames per second, for example. Axon Vision will fill in the frames so that you get a much smoother rate of 60 fps, eliminating artifacts like shutter roll and jagged transitions. The phone will also support HDR10 video playback. The system will also tweak the visuals on your phone to offer richer colors with higher dynamic range.

Since there's no option to turn this system off for comparison, I can't vouch for how well Axon Vision works. I can tell you that videos I watched on my preview unit looked stunning, though. A supercut of scenes from The Life of Pi was sumptuous on the Axon 9 Pro, with details appearing crisp even at the 2,248 x 1,080 resolution that's lower than its predecessor. ZTE also showed me a side-by-side comparison of some clips it had prepared, with original videos at 24 fps on the left and the processed result running at 60 fps on the right. On this demo, the technology appeared to be effective -- the tweaked footage looked smooth and colorful. Until I get to do some comparisons for myself on a review unit, though, I can't say definitively that this works. I did notice some odd flickers during my hands-on, but I'll chalk that up to the quirks of a demo.

Another thing Axon Vision does is detect the color temperature of your surroundings with the front-facing RGB sensor, then adjust your display's hues to compensate for any cast in your environment. My briefing was held in a lobby bathed in neutral, natural light, so I didn't get to test this out, unfortunately. Covering the color sensor altogether didn't seem to do anything, though. Plus, other phones already let you adjust display color temperatures to your taste, so you'll basically get the same end result, except for ZTE seems to offer a touch of convenience.

All told, Axon Vision could be unique solution to the problem of not having enough high-quality content to play on our phones' advanced screens. By creating a system that targets all media played on the Axon 9 Pro's screen, ZTE is promising an improved visual experience regardless of source. It's a tempting proposition, but we'll have to see it in the real world to be convinced. 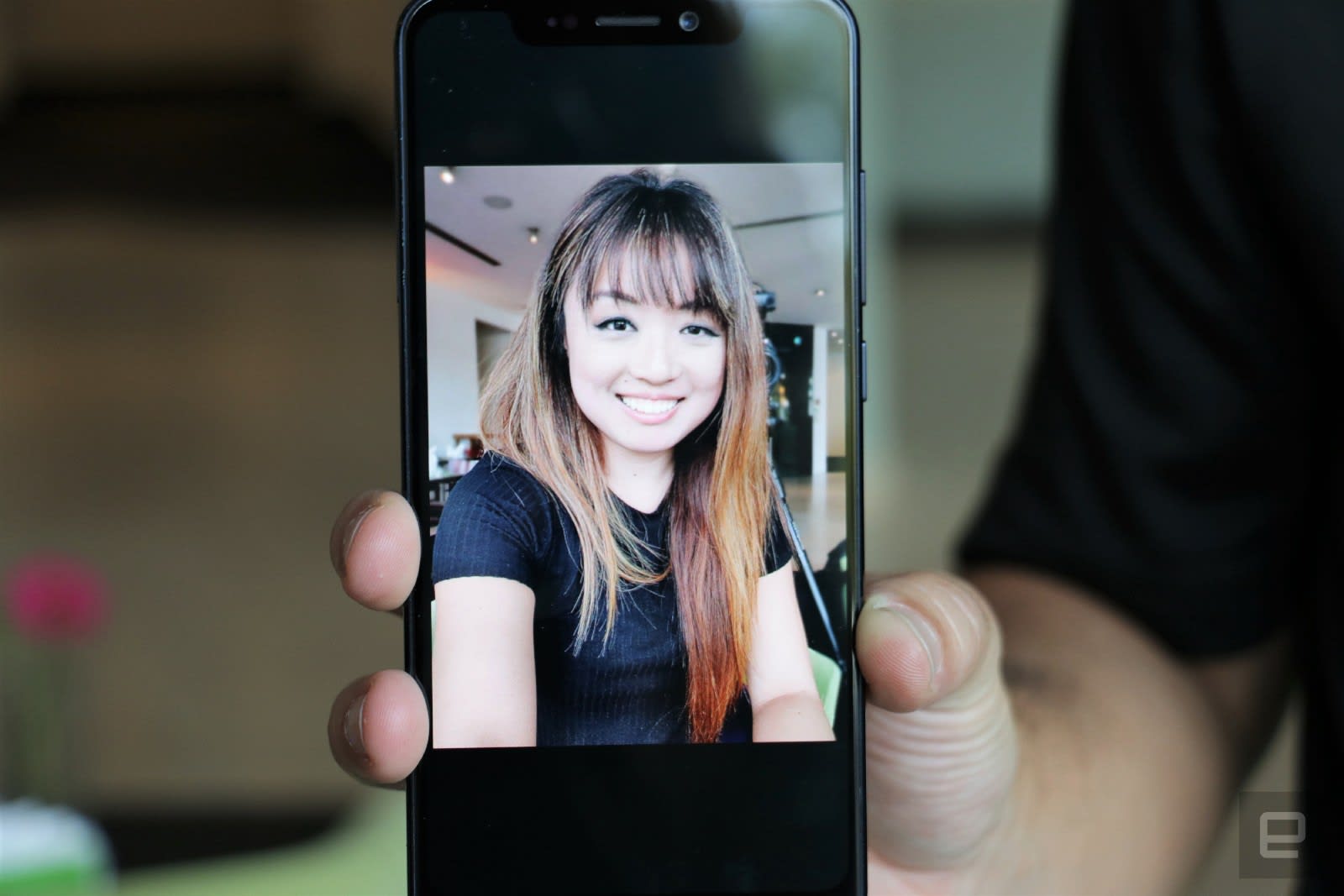 The Axon 9 Pro also packs updated cameras. Instead of a color and monochrome sensor pair like on older versions, the new flagship's rear camera setup matches a 20-megapixel RGB sensor with a 12-MP wide-angle camera that offers a 130-degree field of view. In the camera app, you can tap on an icon to switch between the regular and wide-angle lenses, or switch to Portrait mode to shoot a photo with artificial depth of field. I found that this worked best in optimal lighting conditions -- in a photo of my handsome video producer, the Axon accurately outlined his face, keeping it tack sharp while applying a soft blur to everything else in the background. When I captured a backlit subject, though, the effect was a little muddyy. ZTE also offers a new Sport mode that's supposed to keep moving subjects in your frame sharp and in focus, and it seemed to work well in my limited testing on fast-walking passersby.

I was a little worried that the 20-megapixel front camera might be overkill, and I usually shy away from overly sharp sensors for selfies, but I was pleasantly surprised by the portrait I snapped on the Axon 9 Pro. It was bright, colorful and crisp -- but not too crisp. Granted, I was again in flattering lighting conditions, so it's not difficult for most cameras to do well in such situations. The front camera also should come in handy with the new face-recognition feature for unlocking your phone with a glance.

Everything else about the new Axon feels like ZTE playing catch up. The device is rated IP68 for water-resistance, supports Qi wireless charging and has an 18.7:9 aspect ratio -- all traits we've come to expect from 2018 flagships. Though the company switched to a more modern USB-C port (and ditched the headphone jack like almost everyone else), it maintained its attention to audio quality by packing stereo speakers with dual power amplifiers for clearer Hi-Fi sound at louder volumes. Other than the backing music to the Life of Pi video, which was rounded and clear, I wasn't able to test the phone's speakers, unfortunately. 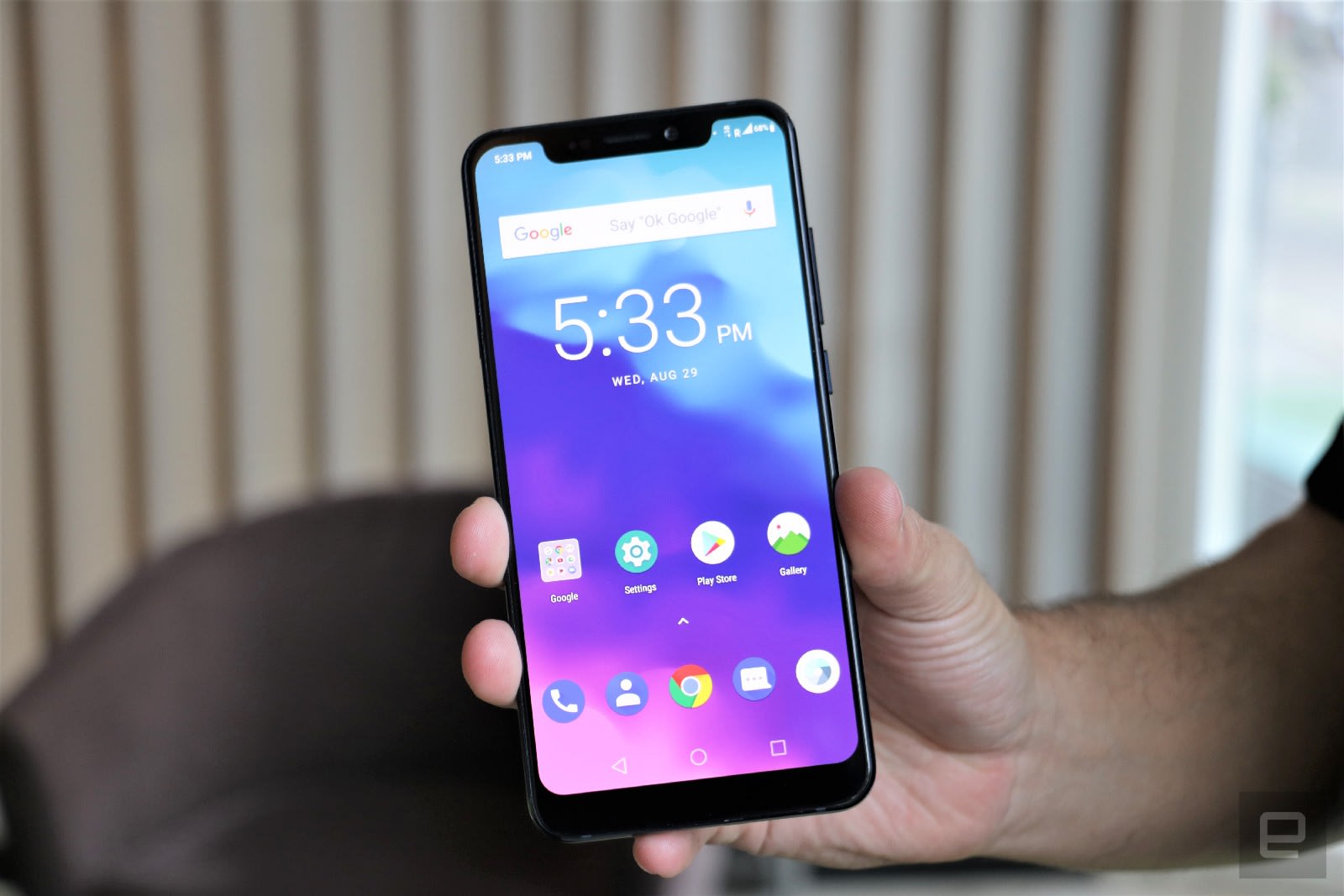 There were some other features I didn't get to try. The Axon 9 Pro will support a new real-time translation feature for up to 29 languages, although I didn't get to check this out at my demo and the company didn't share more details on how this works. There's also the AI-powered management tool that predicts your behavior and "automatically terminates unused applications and removes their files or fragments from the system," while somehow optimizing battery life. It's not very clear yet how this will work, and is really the sort of thing I'll again need to conduct real-life testing to evaluate.

It's another slight disappointment that the handset will ship with the now-outdated Android 8.1 Oreo, but if it's any consolation at least ZTE kept its hands off the software like before, leaving stock Android alone as it should.

Fans of the Axon series will find the latest flagship a satisfying update, even if the Vision tech fails to impress in real life. The Axon 9 Pro's AMOLED display is already a colorful canvas, although it could stand to be a little brighter. For the price, ZTE's premium spec offerings are worthy of at least a second look.

All products recommended by Engadget are selected by our editorial team, independent of our parent company. Some of our stories include affiliate links. If you buy something through one of these links, we may earn an affiliate commission. All prices are correct at the time of publishing.
ZTE's next flagship phone fine-tunes video from any source
android
axon9pro
gadgetry
gadgets
gear
ifa
ifa2018
mobile
politics
smartphones
zte
zteaxon9pro