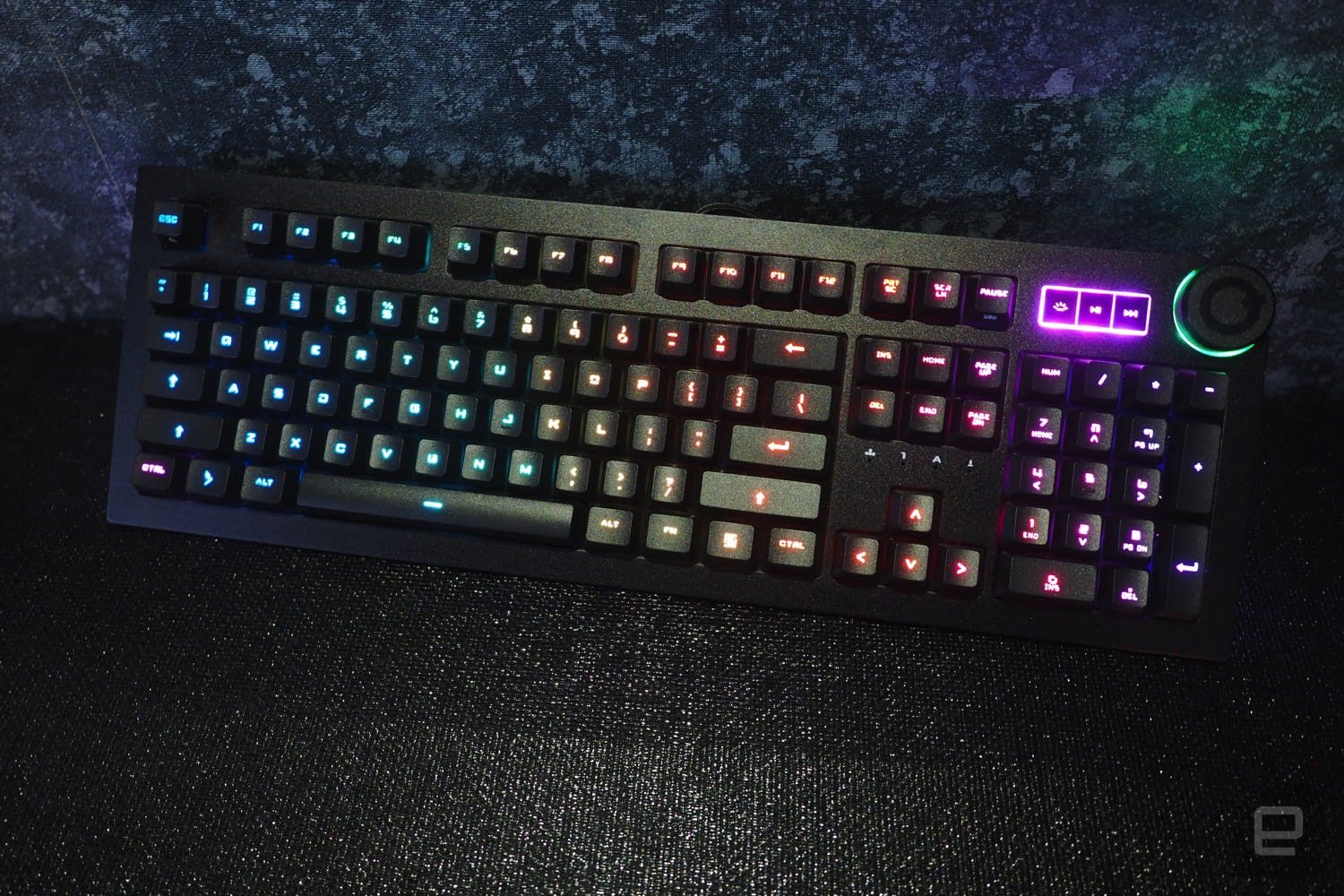 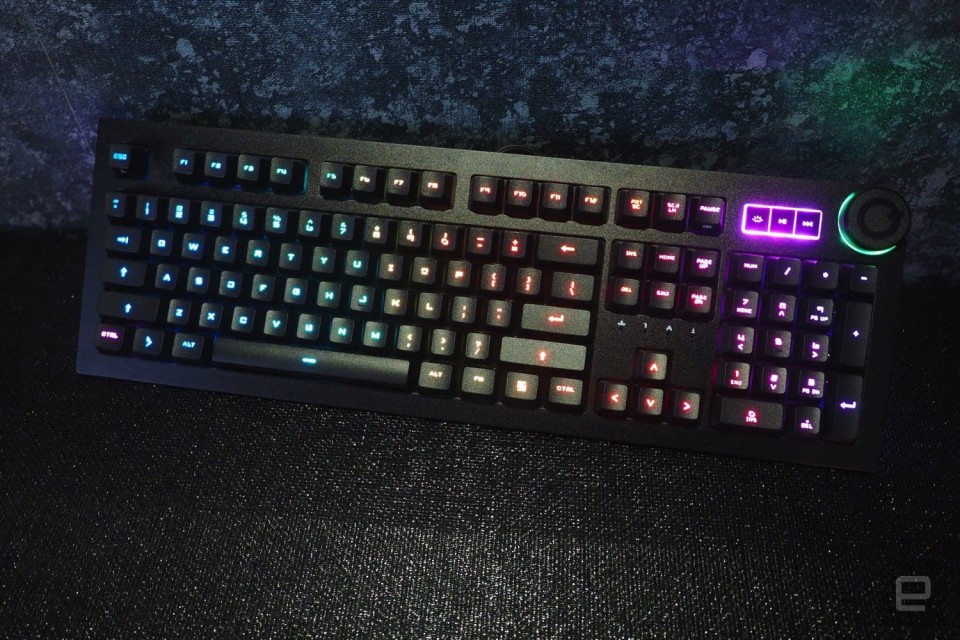 We deal with an utter firehose of information in our daily lives, and sorting through it all is a huge task. It's not uncommon to miss important messages or forget some key task. Das Keyboard's new 5Q and X50Q -- both out today -- are aimed at taking your notifications and reducing them to something incredibly simple: the blinking of the keys under your fingertips. The 5Q first hit Kickstarter more than two years ago, where it blasted through its initial crowdfunding goal of $100,000 to end with more than half a million dollars pledged. It was originally slated to be released in January 2017, then delayed to the beginning of this year. It's been a long wait, though anyone who's ever crowdfunded a hardware project knows that particular pain pretty well.

Now it's here, along with the q-Desktop app that you'll use to to get your information feed all set up. Want to be notified when your favorite author tweets? Or when the motion cams in your house go off? You can have little messages like that sent directly to your keyboard, within limits. The $249 5Q and the $199 gaming-oriented X50Q don't have displays on them. Instead, notifications show as changes in the keys' lighting scheme, and you can choose which keys and what you want them to represent. It's like a secret code you design yourself, with the entire keyboard as your canvas. 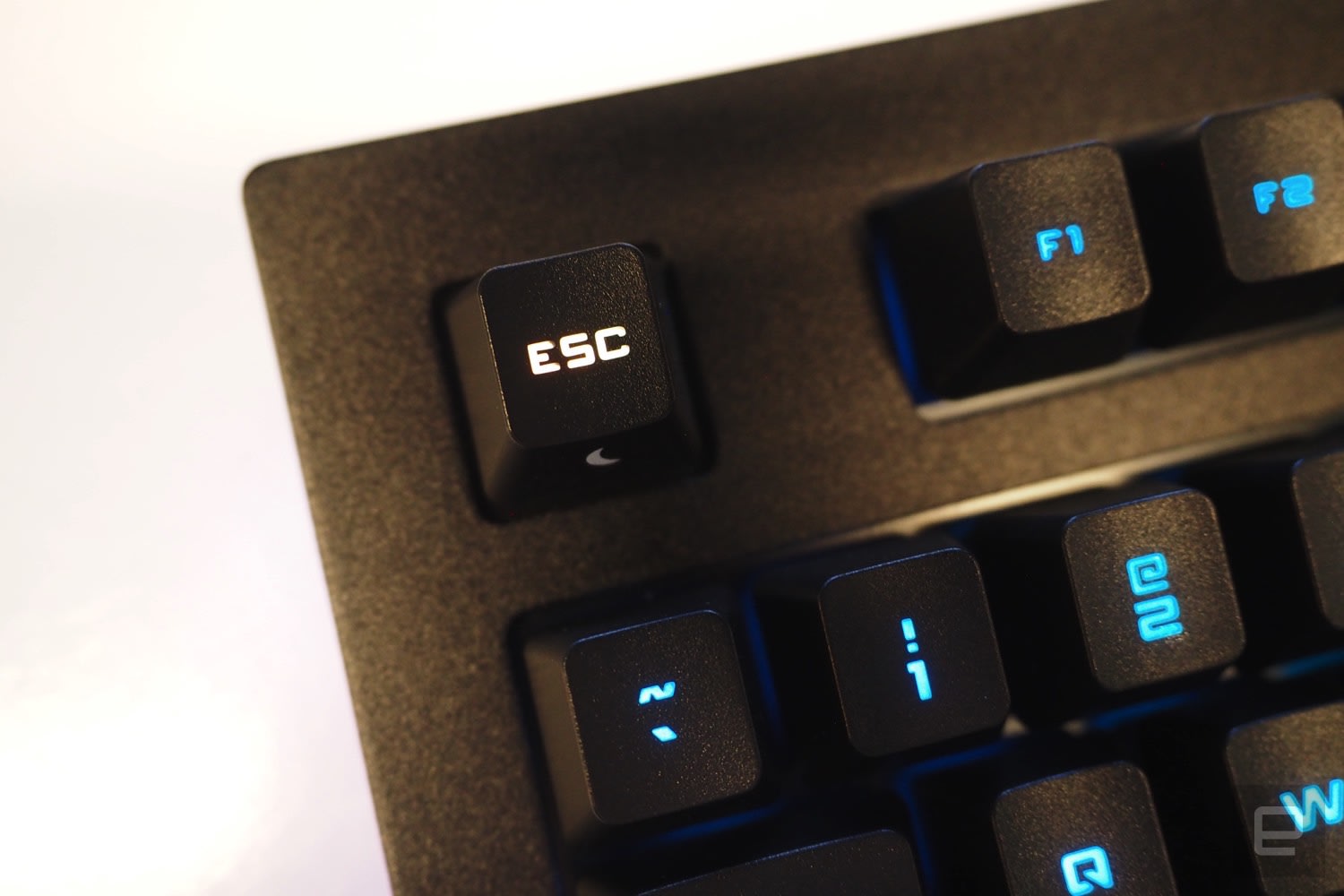 For example, I have it configured to make the E key pulse blue whenever Engadget tweets. The space bar will glow if a Trello card is assigned to me. And the J key will go white whenever my brother streams on Twitch. These were all easy to do, because it uses IFTTT and Zapier to make things happen. If you're familiar with these services, creating your own applets should be a breeze. Even if you've never used them before, it's not hard to figure out. Simply search for the service you want notifications from, then select Das Keyboard as where you want to send them to. You'll be asked to choose a key, color and even behavior -- that is, whether you want it to blink, breathe or cycle through a rainbow of shades.

If that still seems like too much work, the q-Desktop has a ton of premade applets to choose from in its Signal Center. That's where you'll set up commands, but it's also where your notifications go to live after lighting up your keyboard. The q-Desktop's main dashboard and the Signal Center are the only ways to dismiss the keyboard notifications once they appear. The Signal Center also sends out a visible alert on your desktop, which makes the individual key color feature completely redundant. I was more likely to see one of the notifications on my screen before I even noticed the changes on the keyboard. You also don't have a lot of choices when viewing or dismissing signal notifications: It's either one at a time or all of them. You can't get rid of the ones from just one application, so I ended up with a stack of notifications from the Engadget Twitter account and everything else lost in the pile. It defeats a lot of the point of the keyboard for me. I can see the space bar blinking to let me know I have a Trello card, but I can't find the notification for it in the list easily when it's buried under a slew of Twitter, Twitch and Tumblr messages. My best option at this point is to open Trello itself and find the card on my own.

Das Keyboard isn't the first manufacturer to do notifications on a keyboard: SteelSeries' Engine Apps allow for game-specific notifications as well as Discord integration. And Logitech has a pretty robust programming suite that even allows complex animation, so setting up different alerts on their peripherals is entirely within the realm of possibility. But they're not as user-friendly as the q-Desktop. Plus, if you're buying the 5Q and X50Q, it's specifically because they're made by Das Keyboard, which makes damn fine keyboards. And when it comes to build quality, I can't fault these new decks for much. 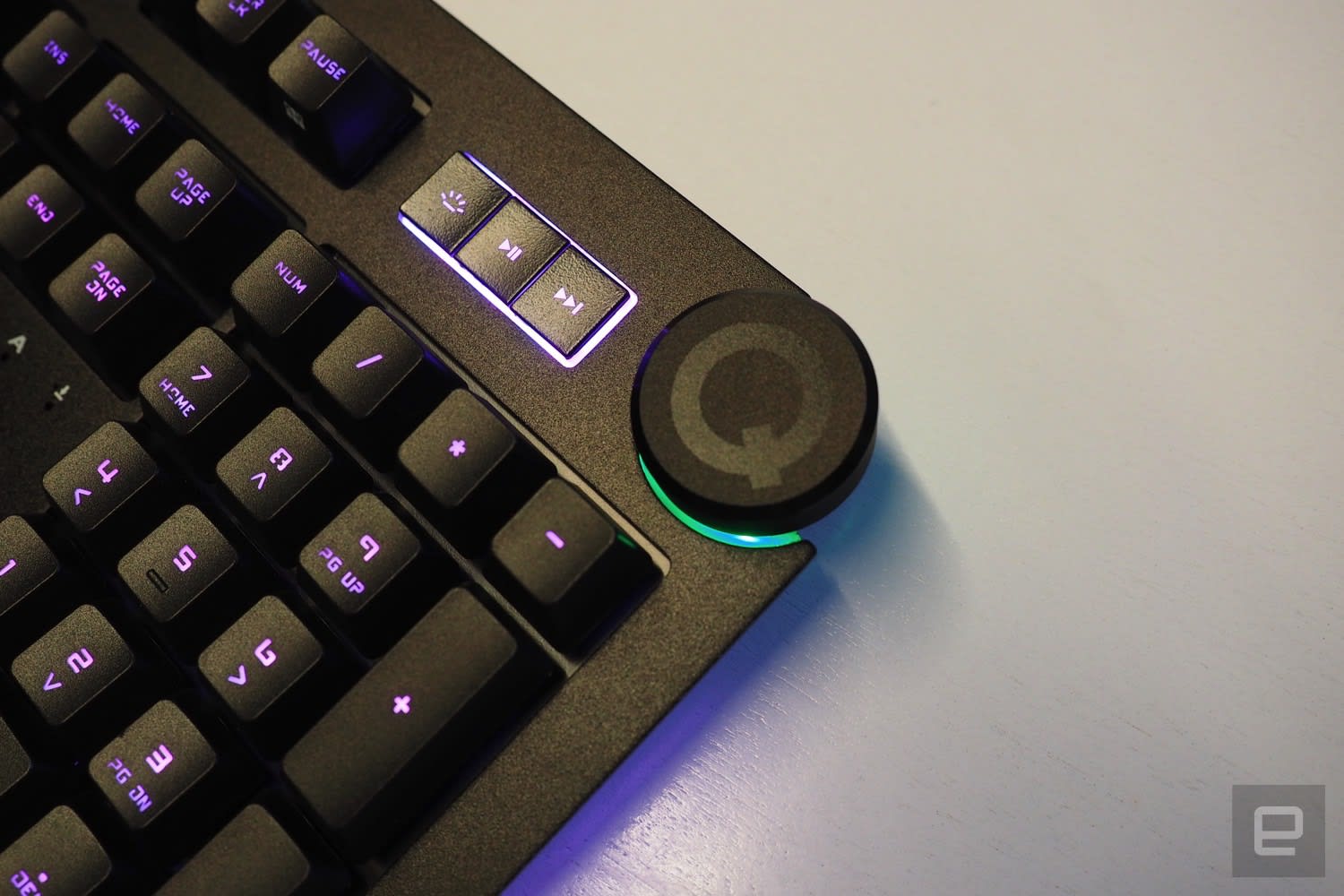 The standard, nongaming 5Q is hefty for a general keyboard. No surprise when the top deck is metal: At 3.2 pounds it rivals the weight of many of its competitors, including recent models I've tested from companies like Razer and Roccat. The action of the Gamma Zulu Soft Tactile keys is smooth with some noise that isn't too distracting, and the dial in the upper right is an absolute pleasure to manipulate. It clicks softly as you turn it as a volume control, and you can even push it to open or refresh the Signal Center. Sadly that's the extent of its powers: You can't assign signals to it or use the button to clear your notifications.

Less thrilling are the media keys, which are little waferlike buttons about 2 millimeters in height that feel cheap and flimsy by comparison. The rest of the keys fare a bit better in quality, but the letters and numbers on them are hard to read, thanks to the texture and font choice. It's not a big deal if you're halfway decent at touch typing, but trying to suss out the pound sign and the ampersand at a glance is a headache. 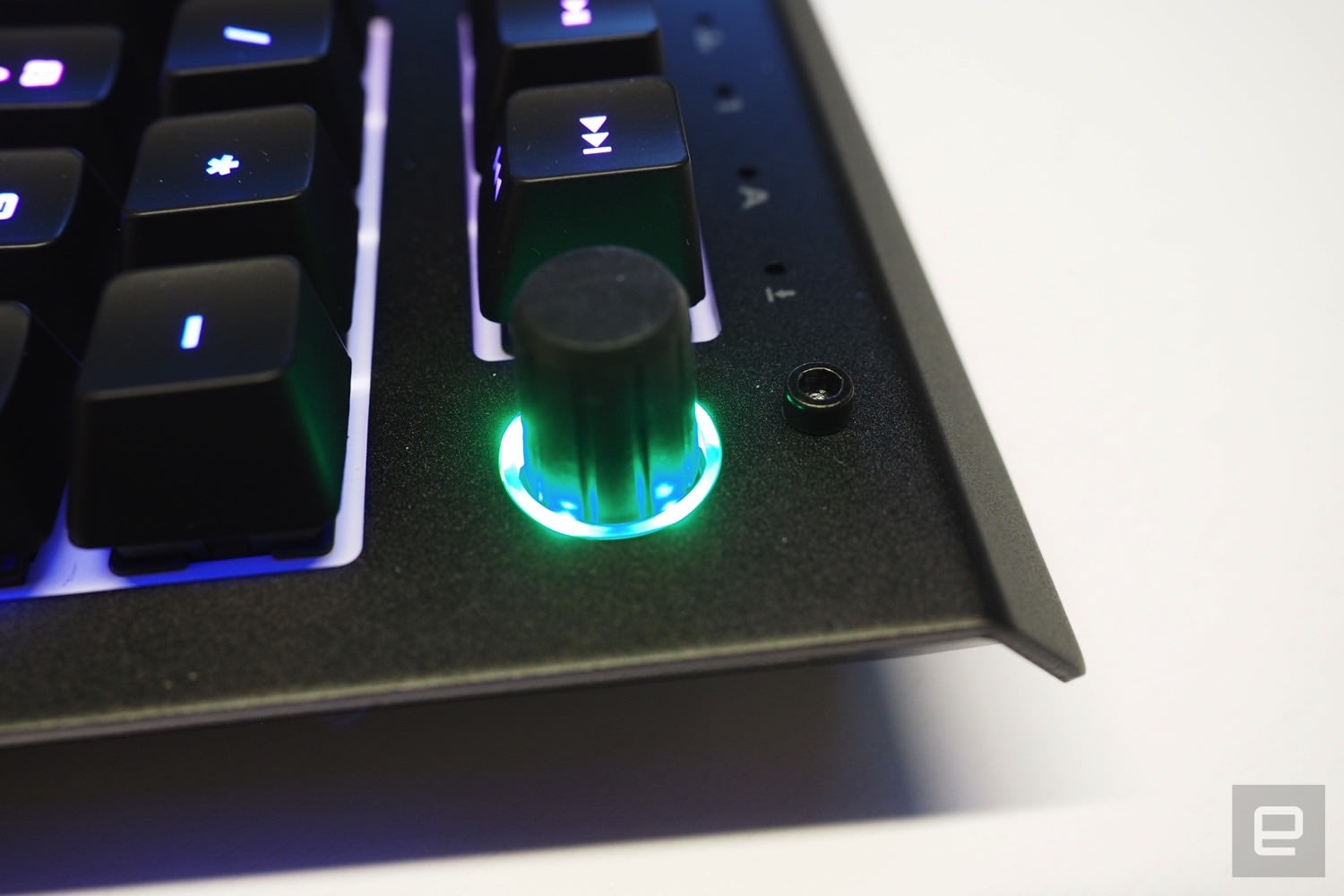 The 5Q would be the heaviest keyboard in my collection of review units if it weren't for its sibling X50Q, a gaming deck that also uses the q-Desktop technology. On the software side there's no difference between the two. They share the same layout, down to the media buttons in the corner. Any signals you set up for the 5Q also work on the X50Q, but only on one device at a time.

The X50Q weighs in at 3.41 pounds, and its metal build is more in your face, with sloped edges and eight rivets framing the sides that might let you remove the top plate. But let's be honest: They're really just there to look cool. The keys feel a little more crisp than the 5Q's, but underneath they're still the same Gamma Zulu switches. It uses the same font but bold. This combined with a more matte texture on the key surface actually makes the symbols easier to read. The media buttons on the X50Q are actual keys, which is a vast improvement, but the dial has been downgraded to a narrow knob. 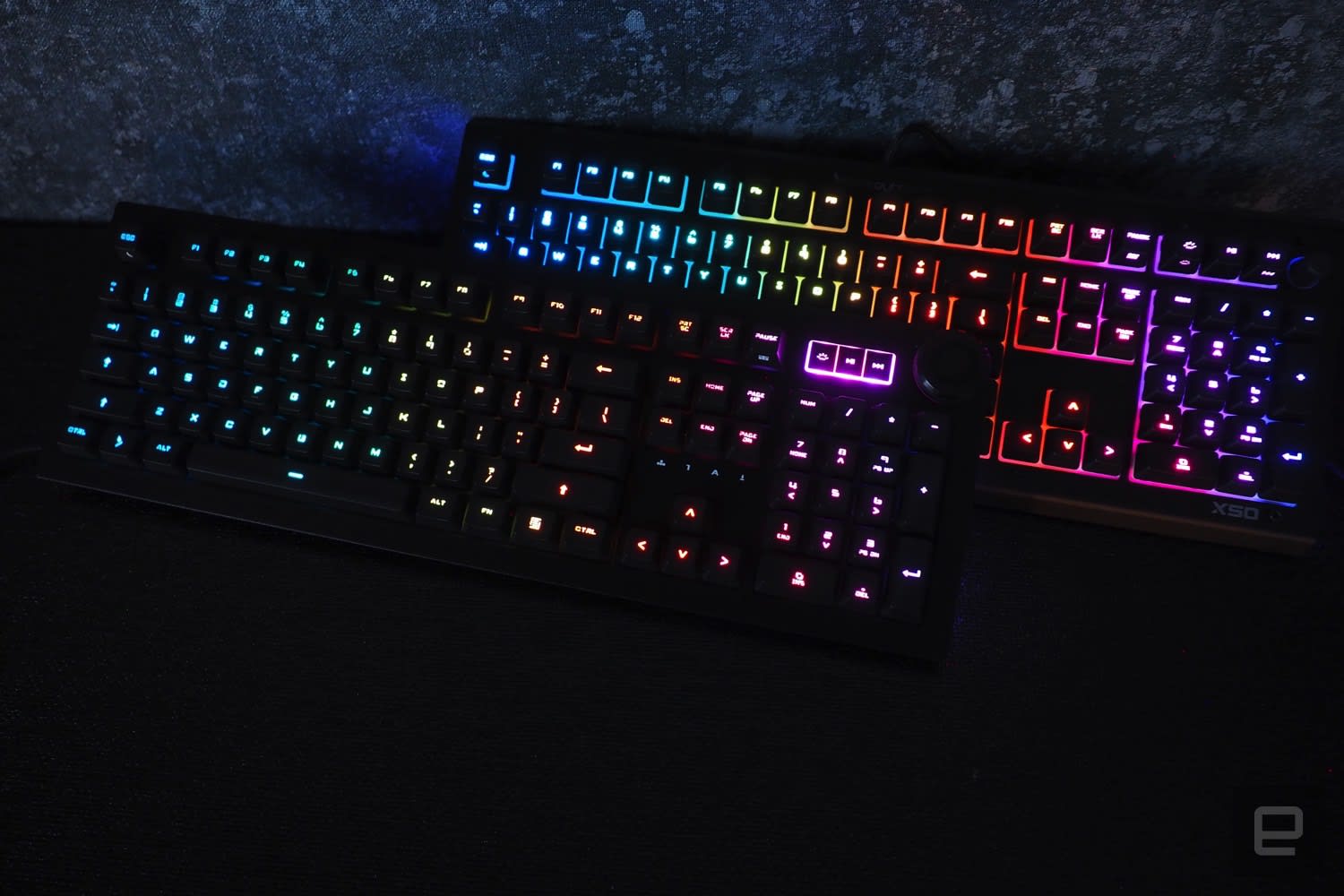 While the builds are for the most part top notch, the q-Desktop and signals still leave a lot to be desired right now. Das Keyboard has promised features like multi-key animations, trails of color that would travel up and down sections of your keyboard with the weather or fluctuations in the stock market. But these applets and the ability to program them won't be available until later this month. The documentation the company provides online hasn't been a lot of help either.

The q-Desktop has a definite chicken-and-egg problem: It's not really worth purchasing because the applet ecosystem is small, but that ecosystem won't grow until people start buying and using it. Right now the 5Q and X50Q are keyboards for people who like to tinker and experiment. Anyone who wants an easily customizable, expansive suite of notifications at their fingertips might be better off sitting tight.

In this article: 5q, daskeyboard, daskeyboard5q, gadgetry, gadgets, gaming, gear, ifttt, keyboard, kickstarter, notifications, personal computing, personalcomputing, x50q, zapier
All products recommended by Engadget are selected by our editorial team, independent of our parent company. Some of our stories include affiliate links. If you buy something through one of these links, we may earn an affiliate commission.