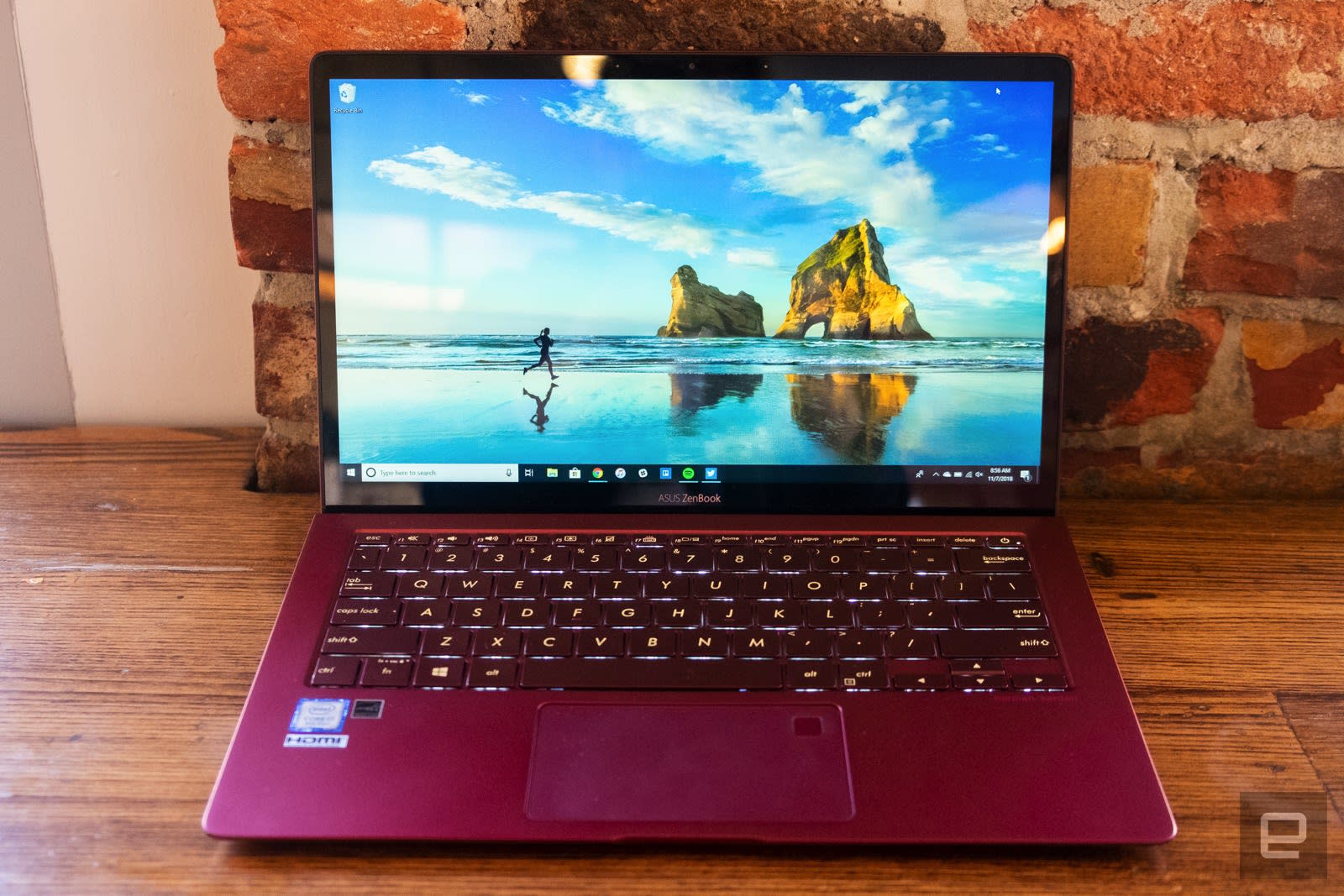 It's a capable computer, but there's not a lot to set it apart.

ASUS has cranked out so many laptop variations over the years that it's a little hard to be surprised by a new traditional clamshell notebook. But the ZenBook S represents an intriguing combination of portability, power and design. It's extremely thin and light, offers some solid specs, and features an odd hinge design that props the keyboard up at a slight angle. Oh, and it comes in a shiny, attention-grabbing maroon color.

Of course, there are dozens of Windows laptops on the market at any given time, and many of them have more modern and, let's face it, exciting hardware designs. But if you don't care about getting a laptop with a detachable keyboard or a 360-degree hinge, the ASUS ZenBook S delivers almost everything we could ask for from an ultraportable. 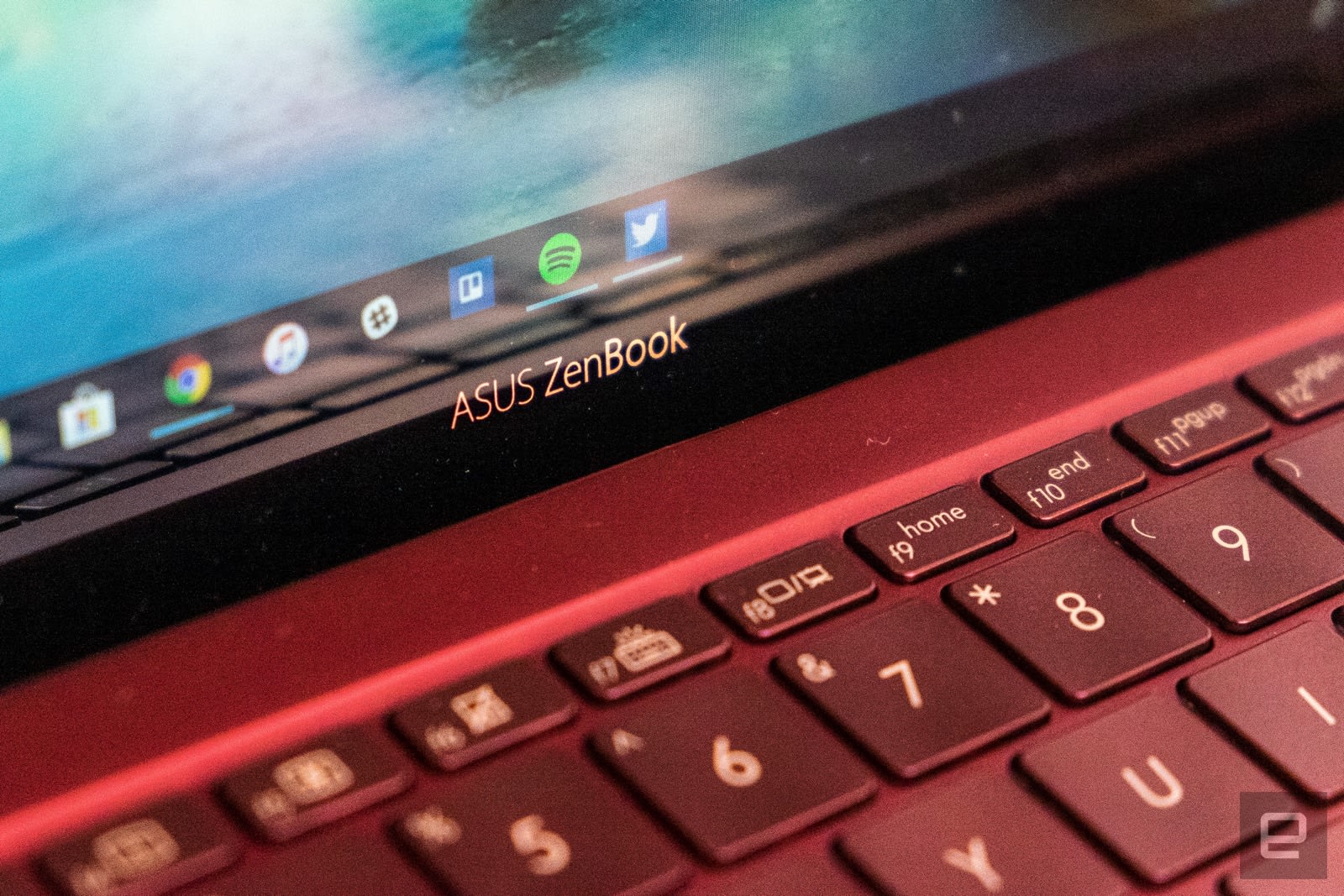 As I mentioned, the ZenBook S hardware combines thinness and durability. At 2.2 pounds, it's one of the lightest laptops you can buy. Factor in its compact footprint and it's the kind of device you can just throw in a bag anywhere you go and forget it's there. There really aren't many conventional laptops in this size range, either; unless you're willing to forgo the standard clamshell design and try a Surface Pro, it doesn't get much smaller than the ZenBook S.

Despite that thin body, the cushy, backlit keys offer the kind of deep travel that MacBook Pro owners can only wish for. It took no time to adjust to the ZenBook's keyboard, and I'm glad that ASUS doesn't seem to have made any compromises. Sadly, the ZenBook S is yet another Windows laptop with an average-at-best trackpad. It's on the small side, and not as responsive as I'd like. After using the comically large MacBook Pro touchpad, I found myself missing its spacious dimensions. At least the trackpad here also has a fingerprint sensor, which makes logging into the machine a breeze.

The ZenBook may be thin, but ASUS promises that it's durable, too. I didn't throw it down the stairs or anything, but it does feel like a solid, well-made machine that should handle most people's routines with ease. The display doesn't flex unless I apply real pressure, while the keyboard panel feels sturdy. ASUS says the aluminum-unibody ZenBook passed the military-standard (MIL-STD) 810G tests for "drops, temperature, humidity and altitude," so it seems like it'll take some effort to cause meaningful damage.

Finally, there's that hinge. When closed, the ZenBook looks like any other thin laptop, but a small bit of the "bottom" of the body moves along with the screen and props the keyboard up at a slight angle. It actually looks quite similar to how a Surface Pro looks with the keyboard attached, despite the totally different hardware. It doesn't look like any other laptops I can think of, but it's a useful design choice. The extra space was designed to improve airflow when you're typing on a desk, keeping the computer cooler when it's working hard. The slight slant to the keyboard itself also makes for some pleasant typing, and it helps, too, that the speakers (hidden on the bottom of the ZenBook) emanate louder audio, thanks to that vertical lift. 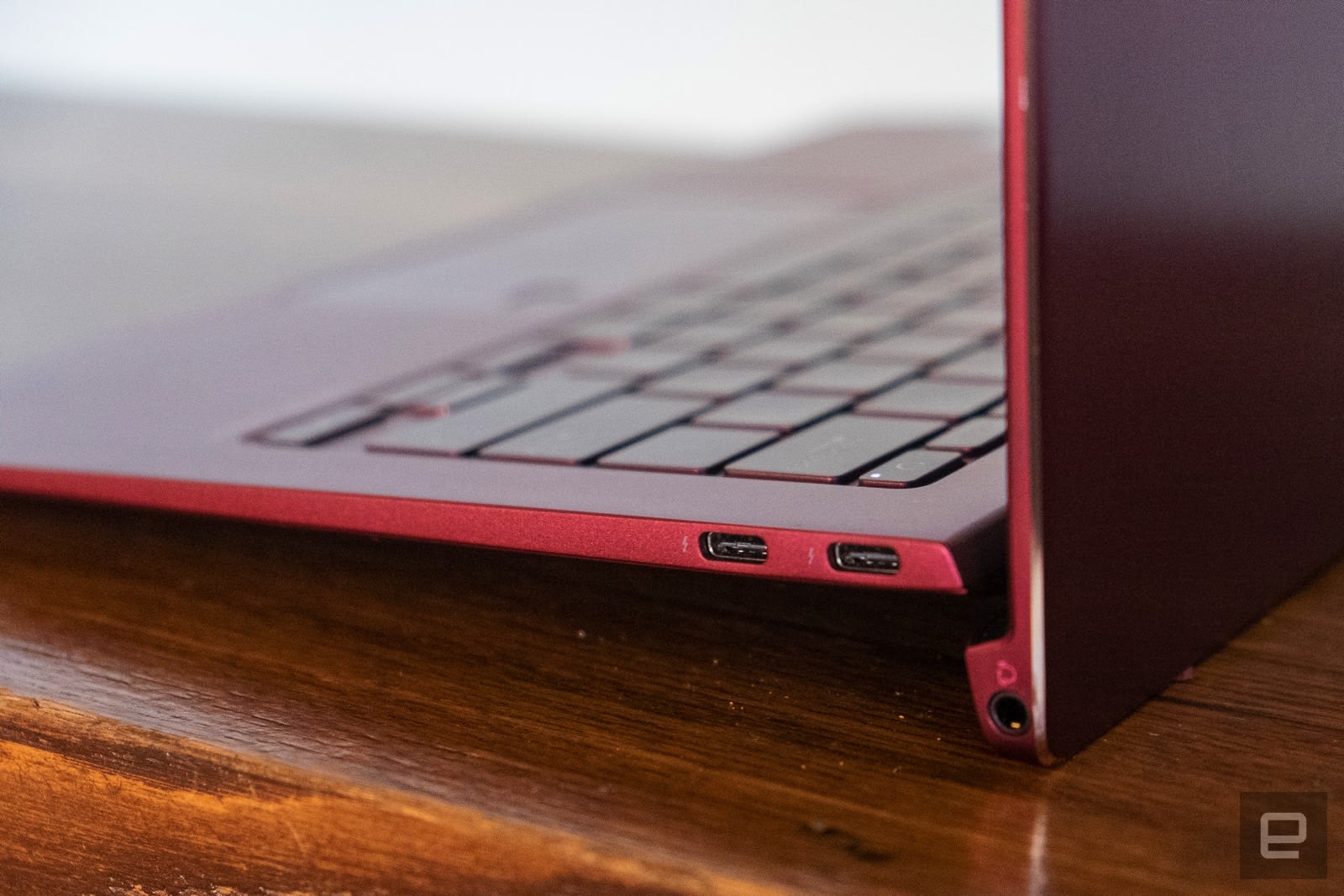 The strange hinge design isn't quite as good when you're using the laptop on, well, your lap. Instead of a flat surface, you're balancing the display edge and the keyboard edge, which works fine most of the time. But if you're the kind of person who shifts and moves your legs around a lot while using a laptop (I can't seem to sit still, personally), it's not quite as stable. I got used to using the ZenBook on my lap, but it's still a bit of an adjustment from a normal laptop.

As far as the display goes, the Zenbook S I tested was a bit of a mixed bag. I received the entry-level model with a 13.3-inch, 1080p screen. By and large, it looks great: Colors on photos and webpages popped nicely, and the viewing angles were excellent. The downside is that I simply find 1080p's limited vertical resolution to be a real annoyance these days (1080p works out to a 16:9 aspect ratio, for those keeping track). I'd much rather work on the taller 3:2 screen found on Microsoft's Surface Laptop, as it shows off more website content or text for when I'm drafting reviews like this one. Still, 1080p displays remain common; if you're used to working with one, this screen won't let you down. 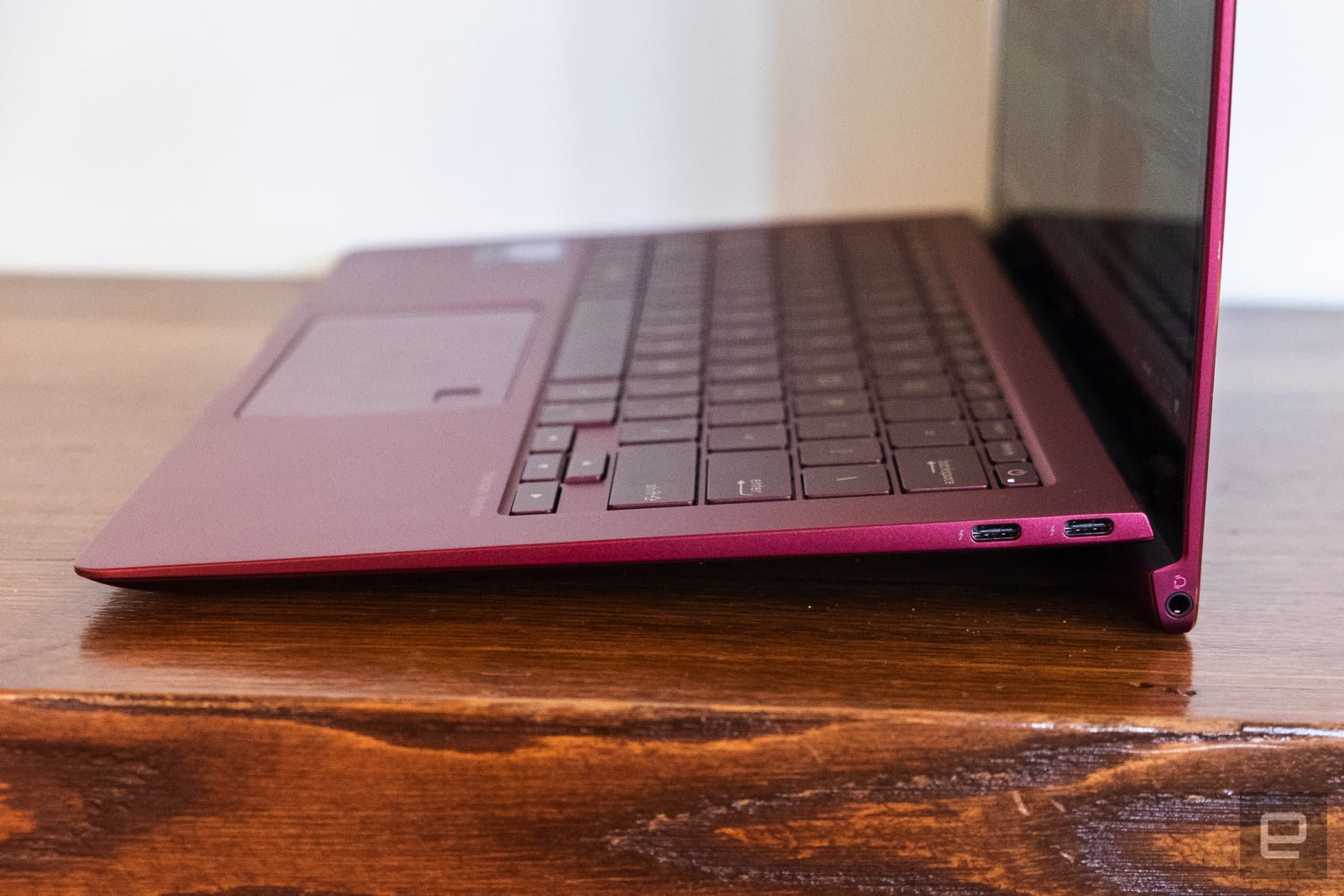 The Zenbook S I tested came with an eighth-generation Intel Core i7 processor (the 8550-U, for those keeping track), along with 8GB of RAM and 256GB of storage. That was plenty enough for my normal workflow, which typically includes tons of Chrome tabs, relatively lightweight apps like Spotify, Trello, Todoist and Slack, and the occasional dabbling in Adobe Lightroom and Photoshop. For most people out there, the ZenBook S should get the job done.

If you're a gamer, it's another story: The integrated Intel HD 620 graphics chip isn't going to cut it for modern Windows gaming. Of course, you're probably not looking at a thin and light computer like the ZenBook S if you're hoping to play Shadow of the Tomb Raider. Otherwise, the ZenBook is a capable performer that should meet most people's needs.

Despite its thin frame, ASUS says the ZenBook S can get up to 13.5 hours of battery life. Indeed, the laptop achieved 12 hours of video playback in our battery test, which is pretty good. Unfortunately, there's a significant gap between that and what I got when using the computer for my normal work routine. I usually got between six and seven hours of mixed use, which is rather mediocre and falls far short of ASUS's estimate.

That said, my laptop has that Core i7 processor, rather than the i5 that ASUS used in its battery tests, and the extra power can come at a cost. Still, I wasn't able to get a full eight-hour workday from the ZenBook S. If I was doing more intense work, like using Lightroom or taking video calls over Hangouts, I often wouldn't even get to six hours. If you opt for the ZenBook S with a 4K screen, expect the battery life to drop even further. 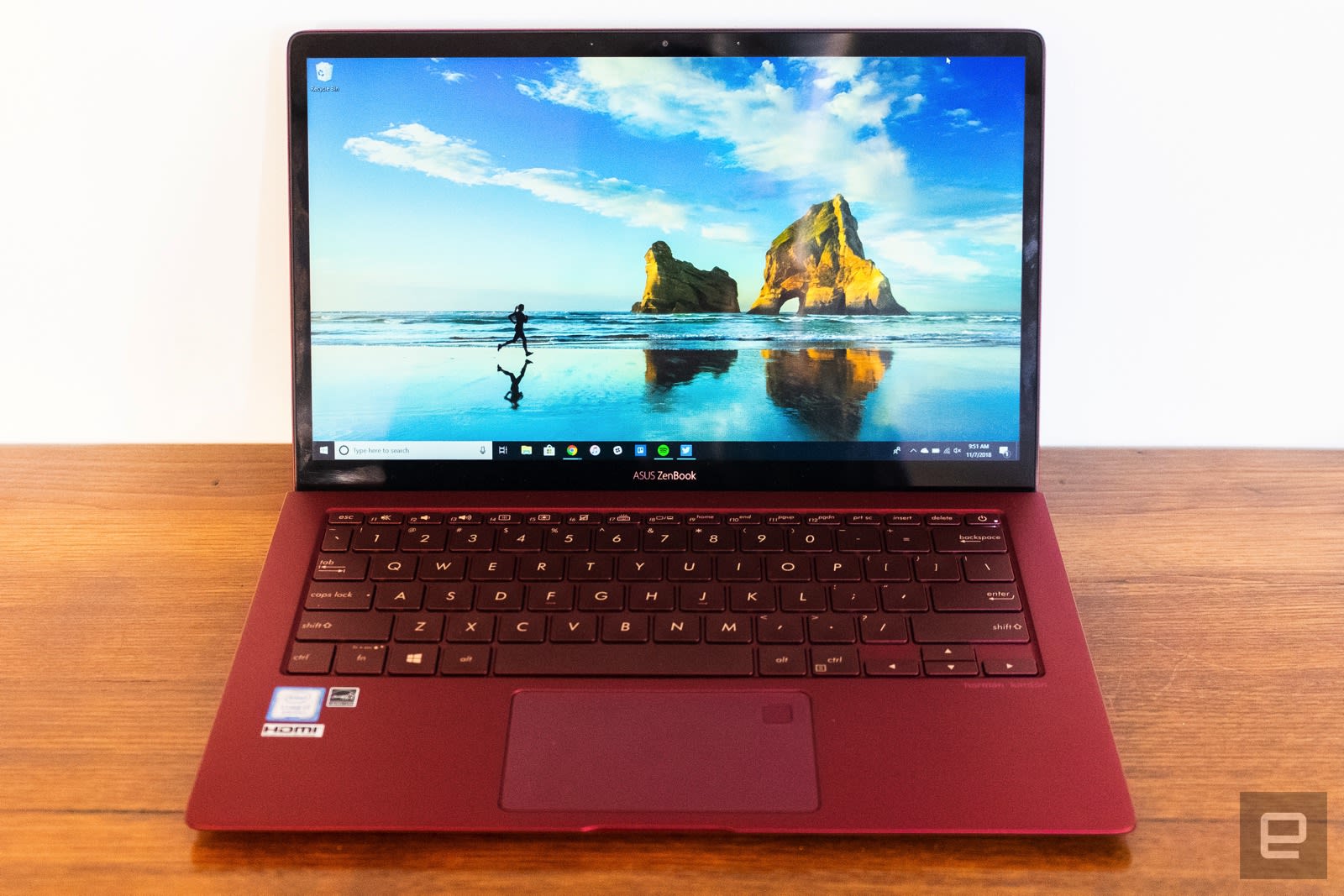 As I noted earlier, there are dozens of traditional Windows laptops on the market, but the ZenBook S plays in a smaller space. You're paying for a combo of small size and decent specs that make it a good all-purpose computer. It's impossible to think about general-use laptops without mentioning Microsoft's new Surface Laptop 2, which starts at $999. The latest model includes Intel's eighth-generation Core i5 or i7 processor, and while it's not as thin as the ZenBook S, it offers a wonderful screen. We're not done testing the Surface Laptop 2 yet, but we can say that last year's model also delivered excellent battery life.

Dell's outstanding XPS 13 is another solid alternative. The current model has essentially identical specs to the ZenBook S model I tested, and right now it starts at $999. You're stuck with a terribly placed webcam, but it does basically everything else well.

And if you're interested in macOS, the brand-new MacBook Air ($1,199 and up) is another jack-of-all-trades laptop with a slim body and a more pixel-dense display than the ZenBook S (unless you opt for the 4K screen). That said, the MacBook Air only has a dual-core Intel Core i5 chip inside, as compared with the quad-core processor in the ZenBook S. That means it might last significantly longer on a charge, but the performance might not be up to snuff, depending on your workload.

Of course, ASUS itself has an extremely crowded product lineup of its own, with dozens of laptops at various price points and form factors, including at least a few that are close enough in price, size and specs to be worth considering. The ZenBook S is thinner and lighter than most, but if you don't need the smallest laptop possible, ASUS has plenty of other options to consider. 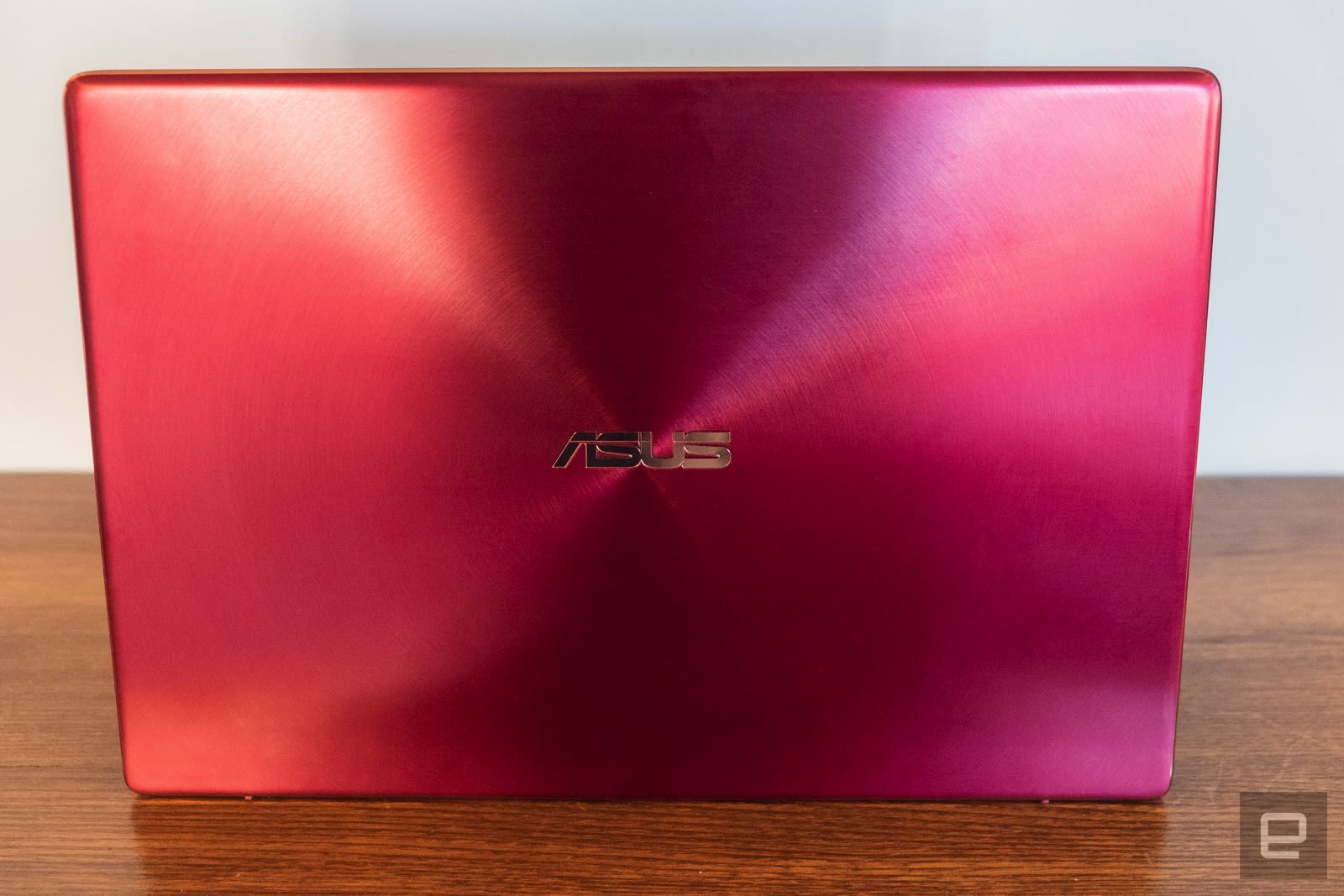 As much as companies like to hype up tablets, 2-in-1s and convertibles as the future of computing, there will always be customers who want a basic, reliable laptop. The ZenBook S fits the bill -- it's not the best Windows laptop, nor the most well-rounded device out there. The disappointing battery life in particular makes it a tough sell as a take-it-anywhere laptop. But that aside, the ZenBook S is a worthwhile choice if you're looking for a laptop that can handle the most common computing tasks. It's a solid performer, and its small size and light weight make it easy to throw in your bag and forget about. Just make sure you leave room for the charger.

All products recommended by Engadget are selected by our editorial team, independent of our parent company. Some of our stories include affiliate links. If you buy something through one of these links, we may earn an affiliate commission. All prices are correct at the time of publishing.
View All Comments
ASUS ZenBook S review: Just a decent laptop