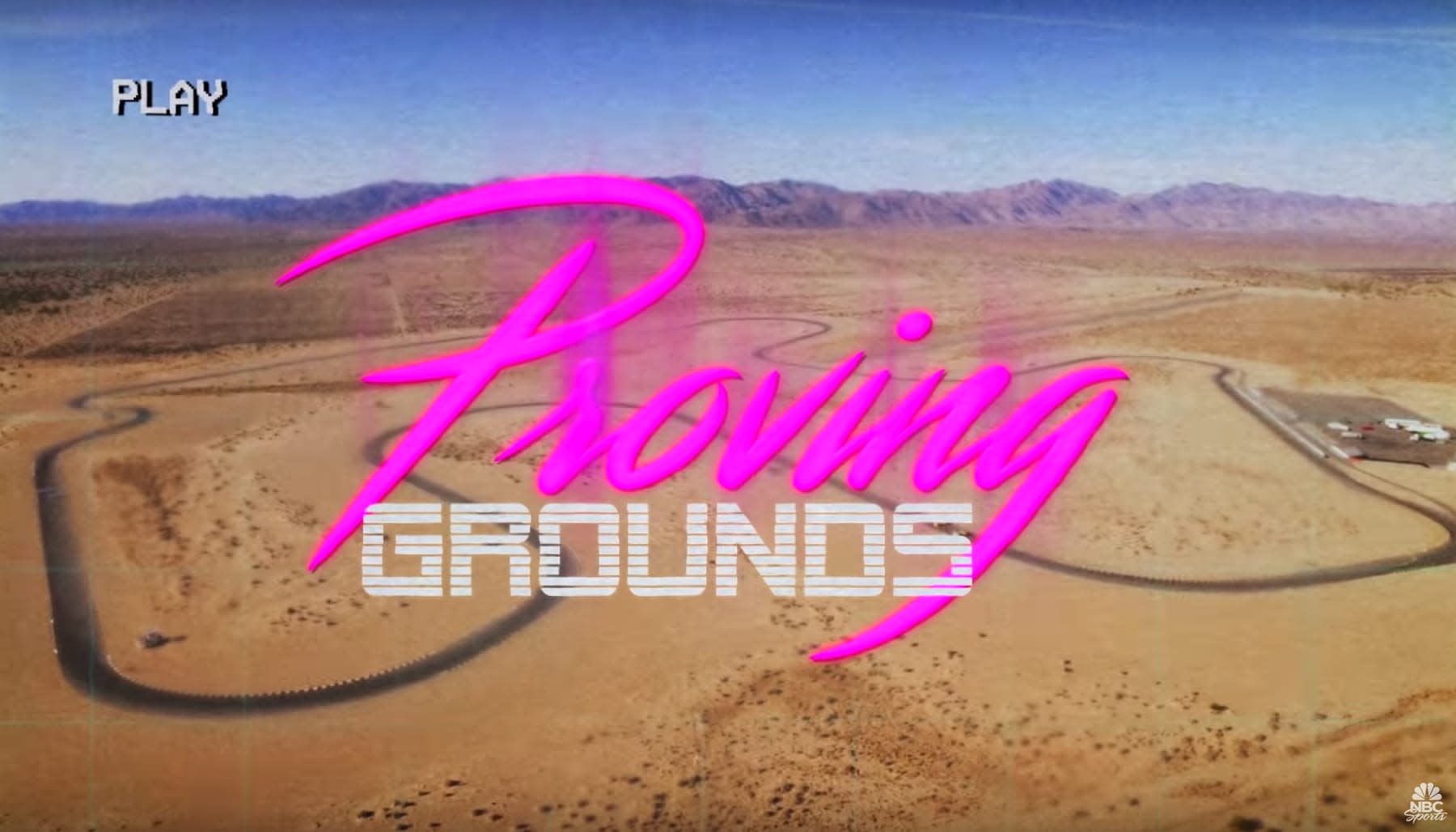 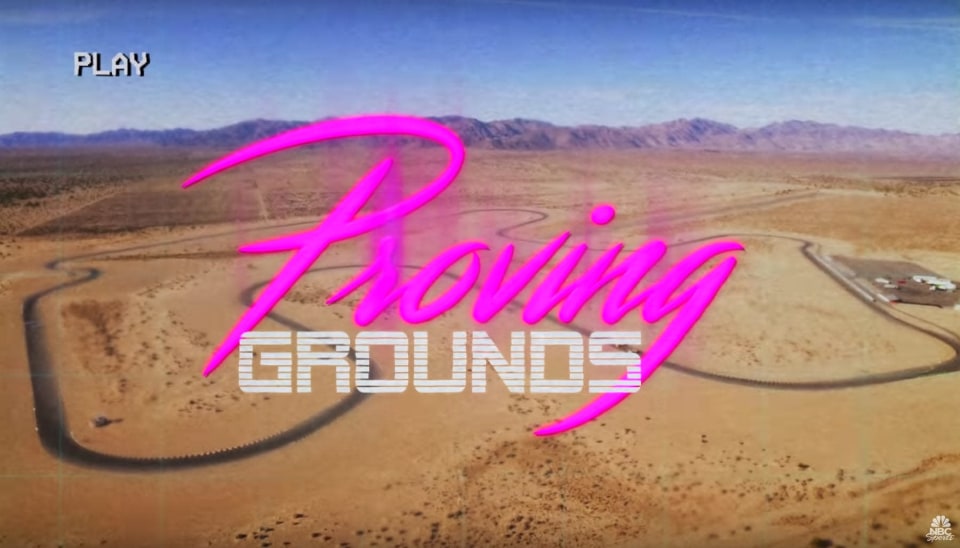 The Nurburgring track is the de facto bar for testing cars. Lamborghinis, Porsches, and Ferraris all fly around the asphalt altar and post impressive numbers. It's built for insanely fast cars, and your average sedan, minivan, truck, or SUV isn't invited.

We all love super fast cars flying around tracks. The thing is, most of us don't drive super fast cars. We get behind the wheel of vehicles that we can actually afford, figuring that on a track, they'd be dusted by these monuments to engineering. It's not your car's fault; it's the track's.

On the new NBCSN show Proving Grounds all cars are given a fighting chance with a track that's more of an obstacle course than something that you'd expect a Huracan Performante to be flying around. It's a hodgepodge of speed bumps, fake deer, parallel parking and even a dirt shortcut. It probably won't show up in the marketing for the next supercar, but it's entertaining to watch.

J.F. Musial, president and CEO of Tangent Vector, the production company behind Proving Grounds (and The Drive and Off the Grid), told Engadget that when NBCSN approached them about coming up with a show, they really wanted to do something where a Corvette and minivan would compete head-to-head.

But they weren't sure this idea would fly with the network, even though they had a good working relationship.

According to writer and producer Matthew Hardigree, they were surprised when it got greenlighted. "We sent them a few pitches and this is the one that we thought that they were least likely to pick and and they said yes. We were like, 'Really? Great, this will be awesome,'" Hardigree said.

As for the vehicular hurdles themselves, when the original pitch was accepted the only obstacles they had in mind were speed bumps and parallel parking. They then looked at the desert-based track and started forming ideas like the off-road portion, something that works very well for this track because of how it's laid out and its location. But for everything that's on the show now, there's probably an idea that was axed during the testing phase, when they pitted a Porsche 911 GT3 against a Chrysler Pacifica minivan.

One was an oil barrel that the cars would have to do a full circle around. Cars that could easily drift would do well, everything else, not so much. The problem was that visually, it wasn't that exciting and it's tough to be consistent when drifting (or at least attempting to drift) a variety of cars and it's more dependent on the driver than the car, and this track is really about the vehicles.

For what did make the cut, here's a breakdown of how each element helps or hinders different types of cars and features. 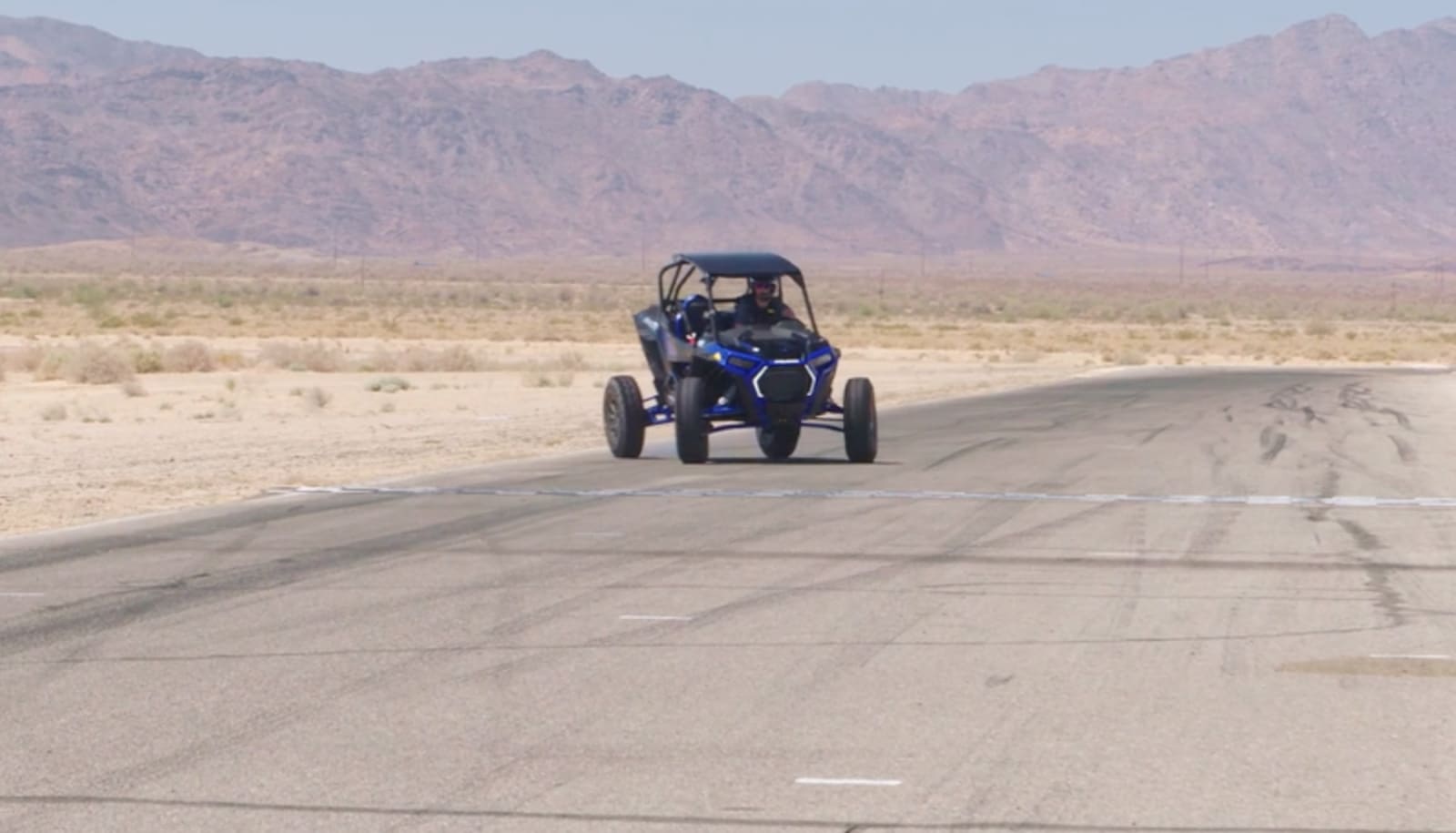 First off, all vehicles are subject to a standing start. That gives AWD and anything with launch control a leg up. Electric cars with their incredible amount of torque also get a nice little advantage here. Basically, it's great for sports cars, not so good for your Toyota Camry or Honda Accord.

Almost immediately though, those low-slung speed machines are brought to almost a complete stop, thanks to a series of speed bumps. Trucks and SUVs can make up some time through this portion of the track and leave the cars that hug the asphalt behind. This is also an opportunity for sedans like the Audi with Predictive Active suspension that raises the body allowing the suspension to suck up the bumps. 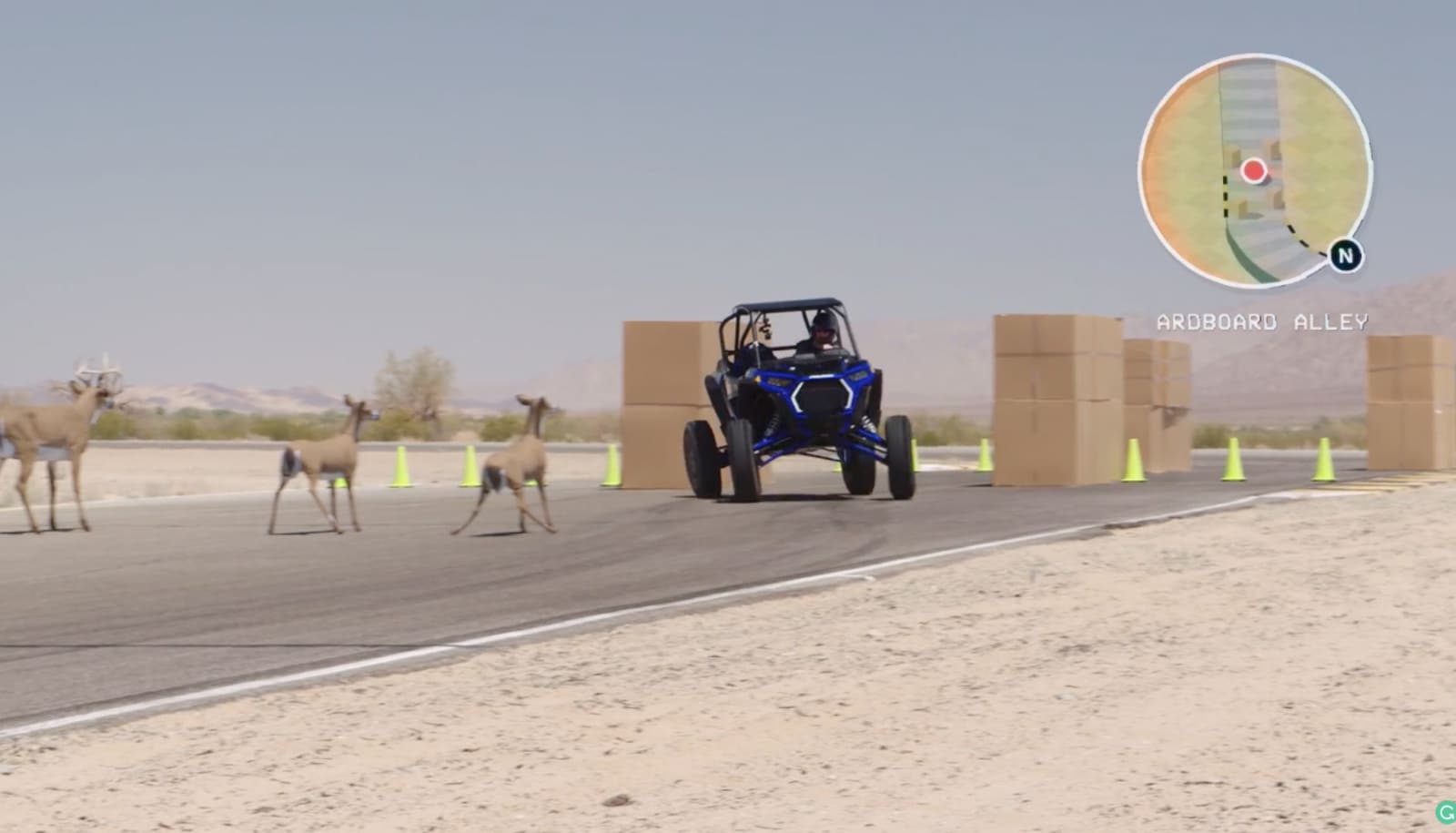 Next, the cars have to navigate through Cardboard Alley. Drivers have to swing the vehicles around cardboard towers. This quick slalom pushes the suspension to the limit at high speeds. It's also far sharper than anything you're going to find on a traditional track. 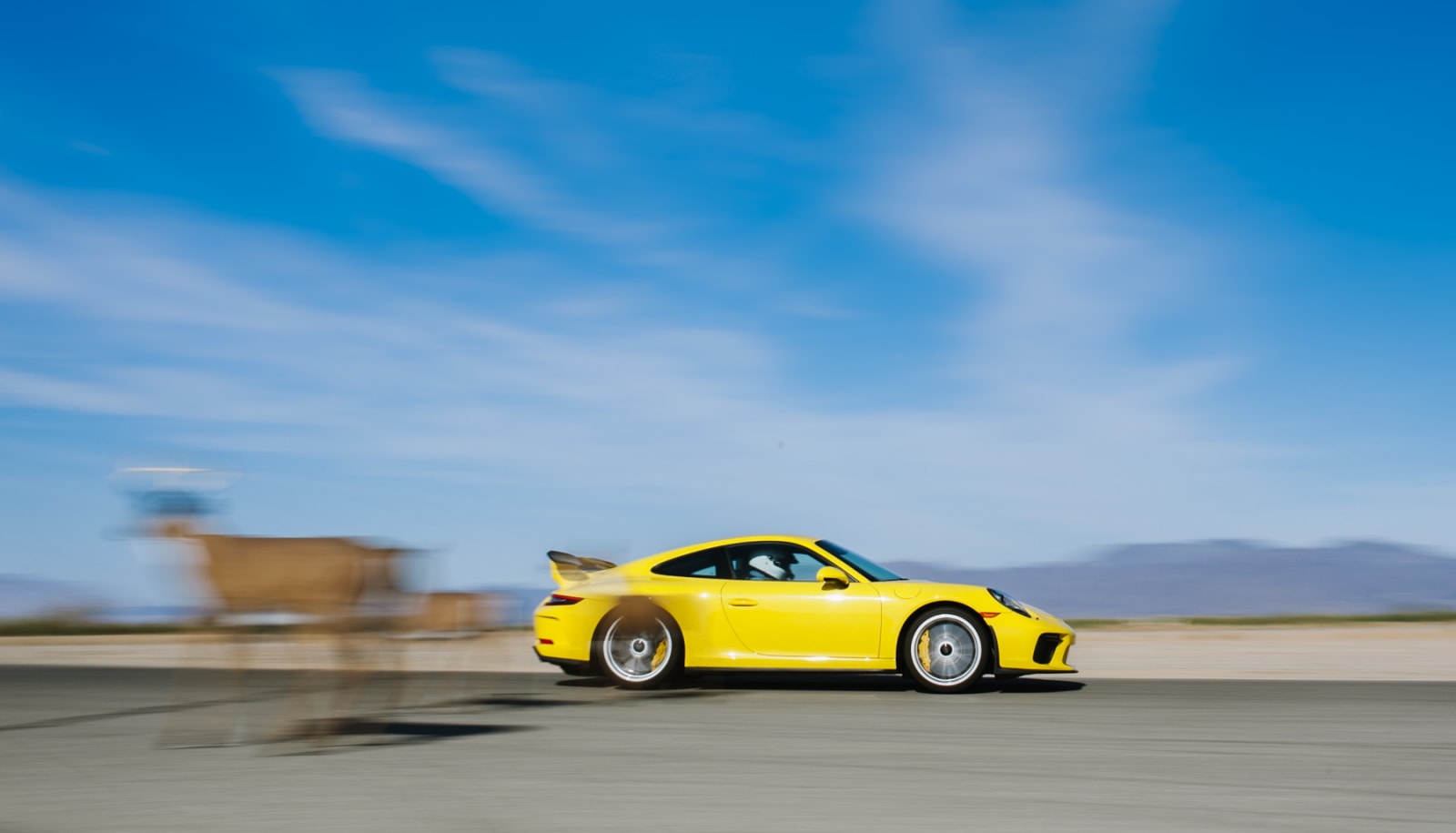 Right after that are the deer. It's close enough to Cardboard Alley that it takes a car that's already off balance and pits it against cute (fake) deer. SUVs don't do so hot here, but sports cars thrive. 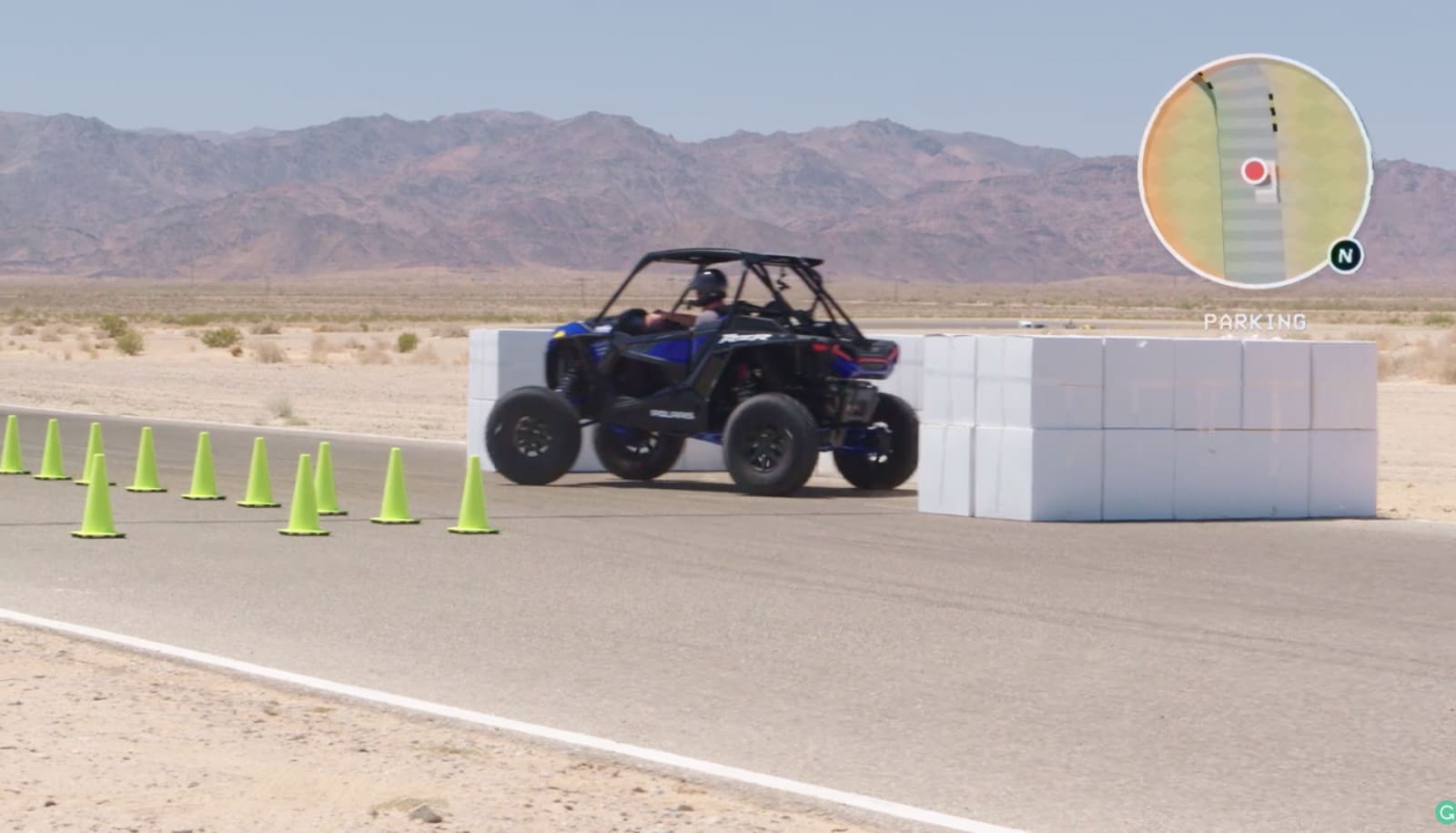 After nearly killing faux Bambi, there's the weirdest track element of all: Parallel Parking. The thought is that this tests the gearbox of the vehicle and rear visibility. Manual transmissions do very well here, while automatic transmissions (especially those with weird electronic selectors like buttons and knobs) not so much. One of the oddest rules for this portion of the track is that if the car has an automatic parking function, the driver must use it and that adds a ton of time to the lap because all those systems are insanely, frustratingly slow.

This is also a good place for those 360-overhead views, especially in cars that have limited rear visibility. Those ultrasonic sensors and cameras not only help you park in your neighborhood but also on the track. Well, this track. 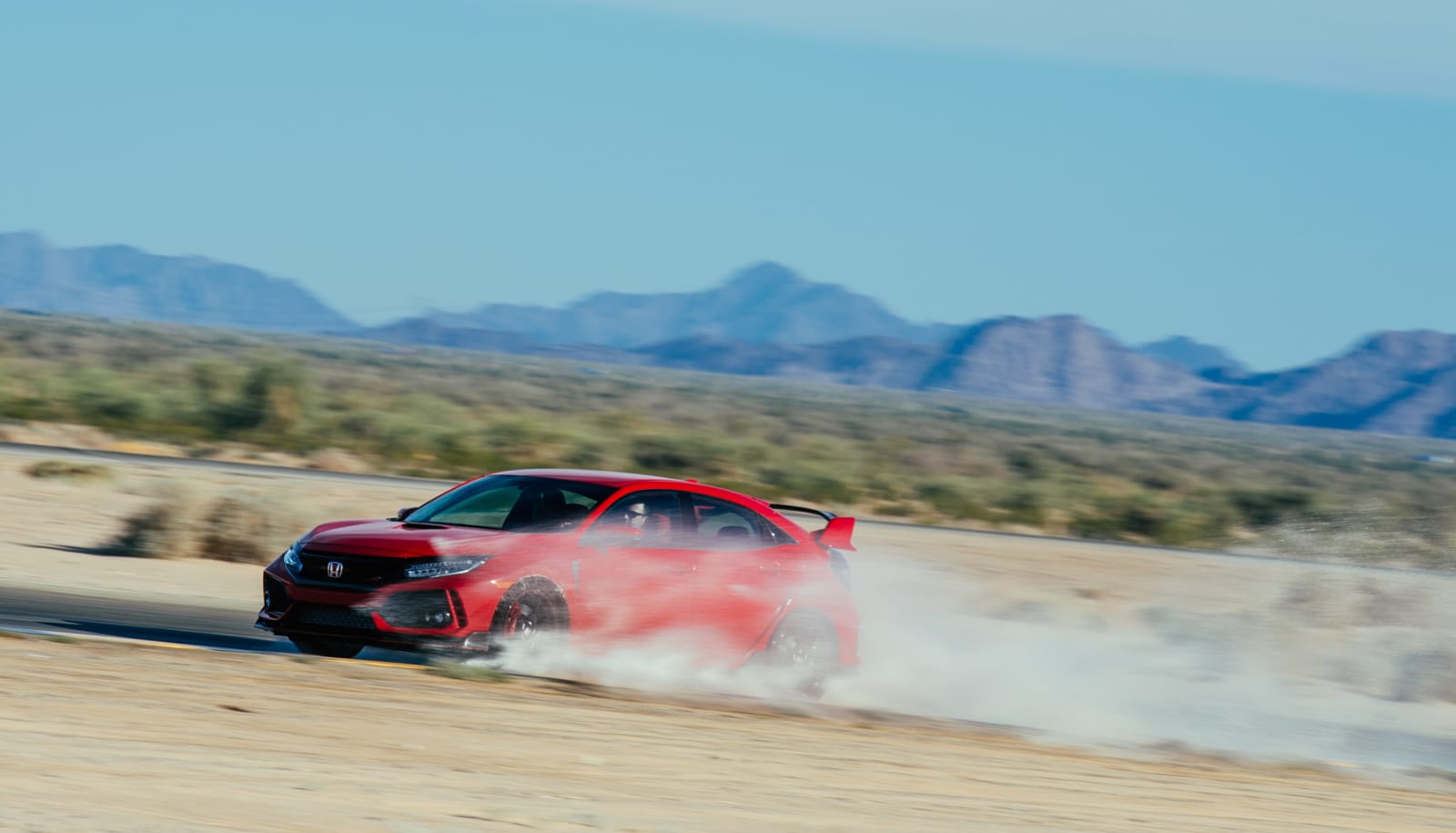 Next is the wet corner. This throws off sports cars with super sticky tires and two-wheel drive SUVs. AWD and lighter cars (Imprezas and Honda Fits) do well here. It's also where tire technology comes into play. A tire may seem like a partnered piece of rubber, but the research and development that goes into making cars stay on the road is impressive, and Musial noted that, overall, cars with Michelin tires did very well here. 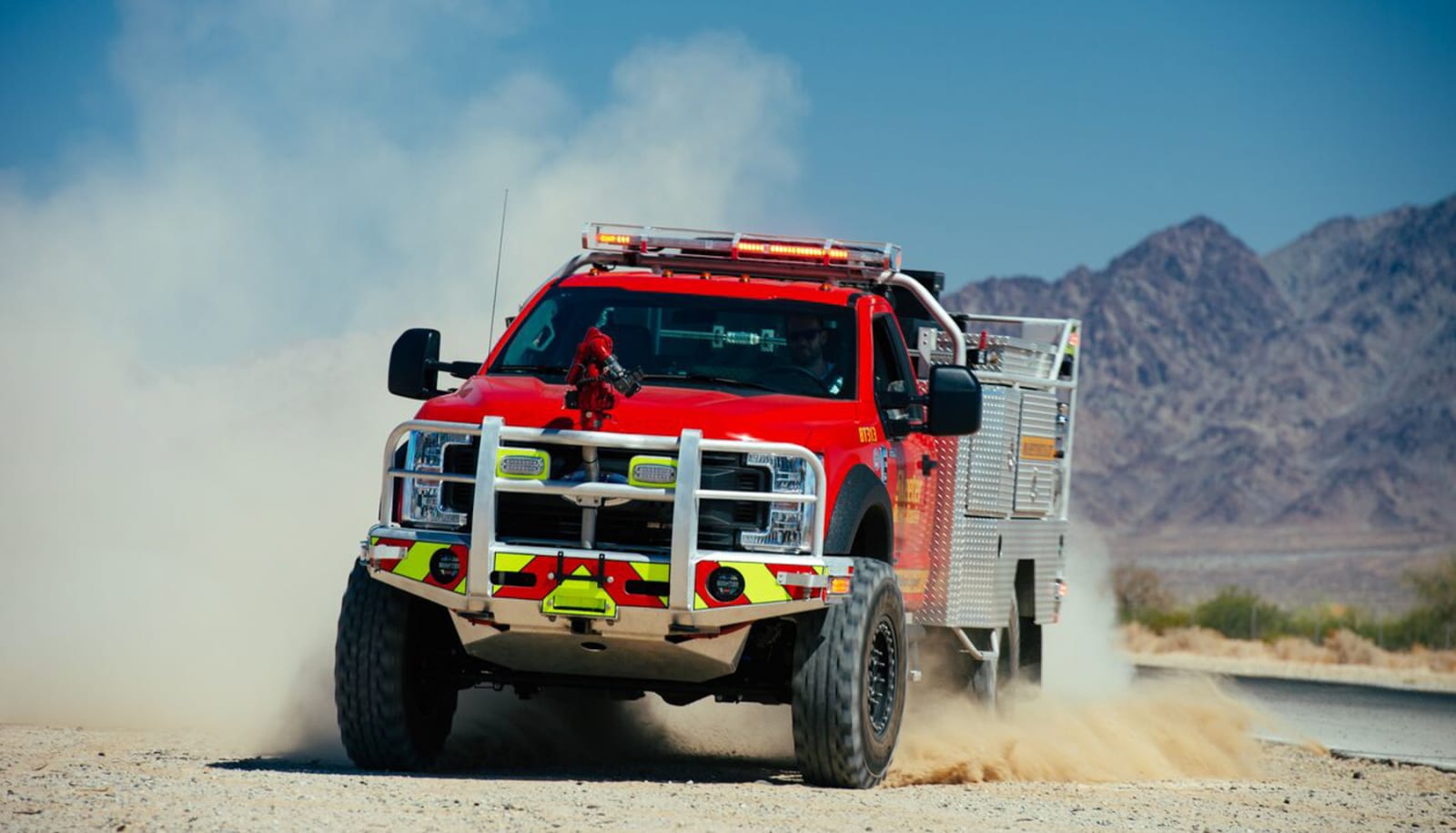 At this point, even with the speed bumps, trucks and SUVs are still at a disadvantage. So there's the Dirty Shortcut and off-road path full of deep ruts and loose dirt that would destroy anything with low clearance but gives these vehicles the chance to make up some time. It's also a good time to see which SUVs live up to the "sport" portion of their name. 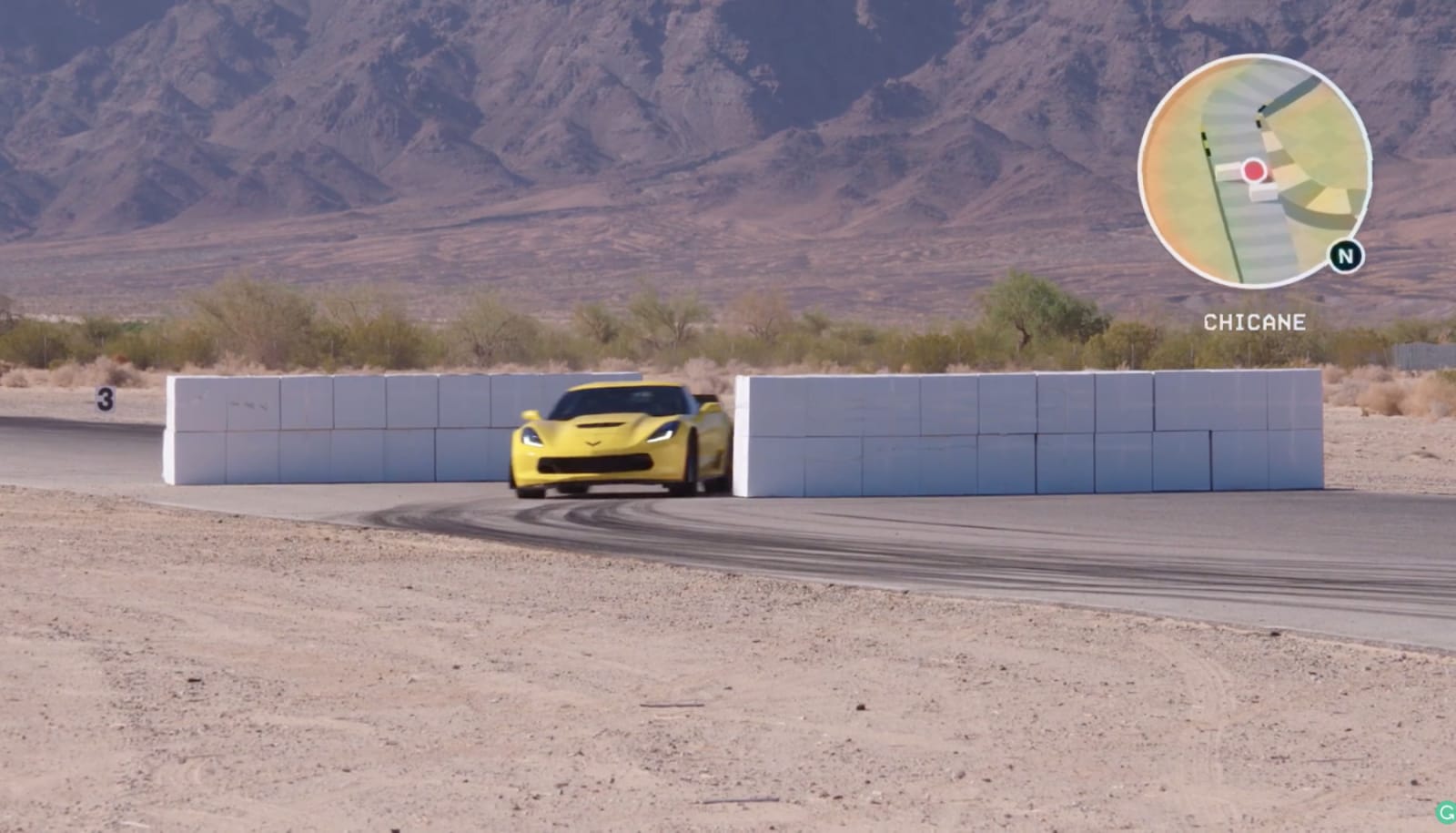 While the off-road vehicles are blasting through dirt, the rest of the cars encounter Goodwood. Two offset walls that test the car's braking and ability to swerve quickly. 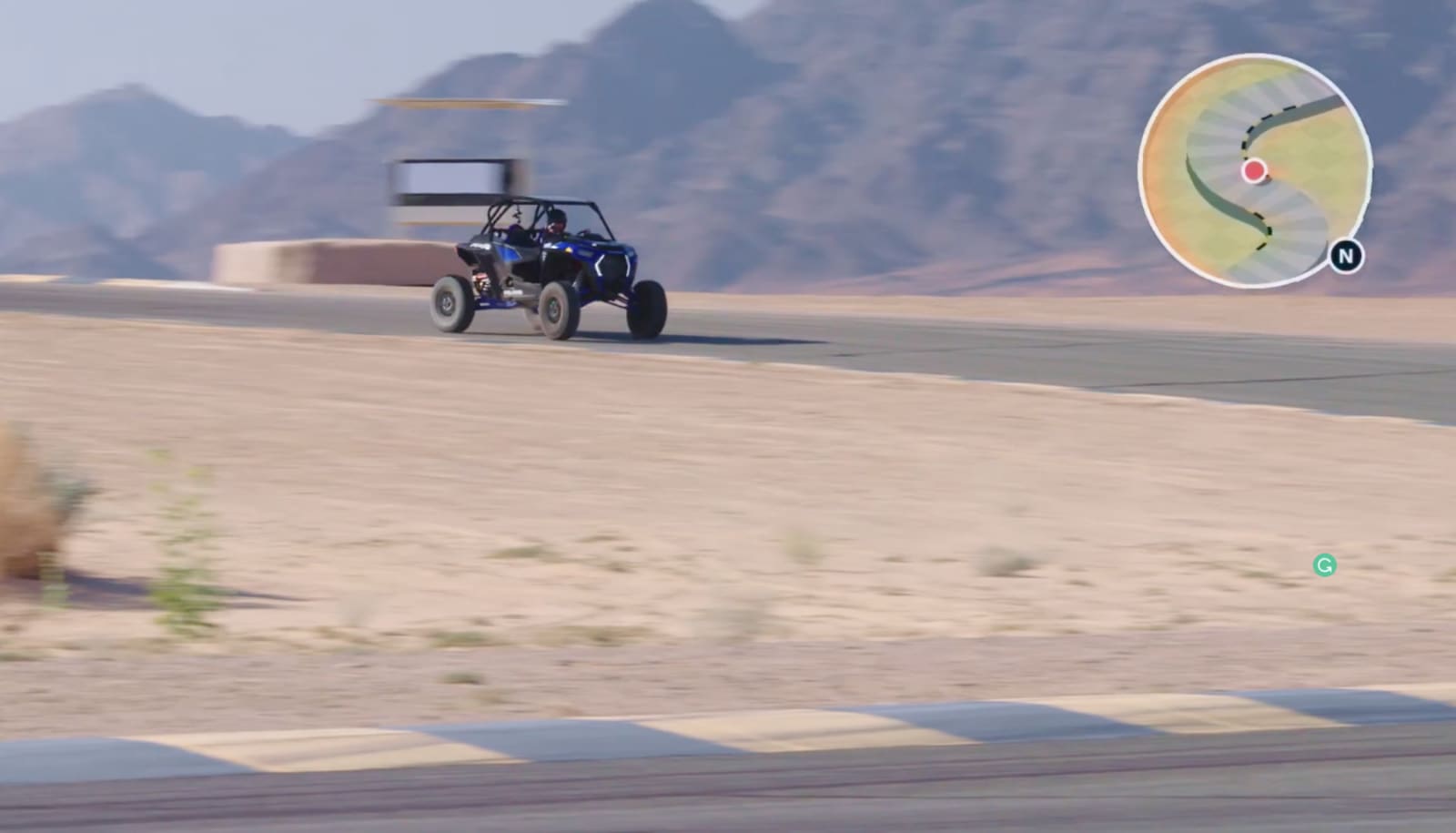 The final two elements are the uphill-to-downhill esses that push the brakes, suspension and engine to the limit as the driver tries to make up for any lost time in the previous sections. It doesn't help that track is in the desert so the vehicles are already being strained by the heat and abuse, pushing them even further to check on the stamina of a car.

It's a good reminder that you don't have to own a track-spec sports car to have something in your driveway that can take abuse even if it's more than you'll ever dish out.

That leads to the final straightaway. The last bit of track is long enough for regular cars and SUVs to get up to speed, but not so long that it allows supercars to decimate the pack.

Taken as a whole, the track is a fun exercise in seeing how well all vehicles do under insanely weird, but sometimes true to real life, experiences. It also yields some weird results with cars like the Polaris RZR off-road buggy doing as well as a new Mustang GT. On what other track is that even remotely a possibility?

While an autonomous future is coming (a long time from now), that doesn't worry the Proving Grounds crew. Michael Kane, senior director of original programming and development for NBC Sports Group, said, "When there's an autonomous car, we will put it on Proving Grounds"

Hardigee chimed in, "I can not wait. Leh Keen has to sit in the car though." I'm not sure they've told co-host, driver and sports car champion Leh Keen about this plan.

From weird off-road vehicles to police cars to Porsches to fire trucks, Proving Grounds will test them all. (Binge watch all the episodes tonight at 7:00pm on NBCSN.) Is it a completely scientific test of a cars capabilities? Not really. But it does give you an idea what all types of vehicles can do when given to a top-notch driver and pushed to their limits. Oh, and it's fun, which one of the reasons so many of us like cars in the first place.

In this article: art, entertainment, gear, nbcsn, provinggrounds, race, racing, track, transportation
All products recommended by Engadget are selected by our editorial team, independent of our parent company. Some of our stories include affiliate links. If you buy something through one of these links, we may earn an affiliate commission.