More people get their news from social media than newspapers

A Pew study found social media was a more popular news platform among US adults.

For the first time since the Pew Research Center began tracking how adults in the US get their news, social media has edged out print newspapers. In a survey conducted earlier this year, 20 percent of adults said they often get news via social media while just 16 percent said the same about print newspapers. However, neither are as popular as radio, news websites or television. Television topped the list, with 49 percent of respondents saying they get news from TV often while 33 percent and 26 percent of respondents said news websites and radio were significant news sources for them.

Though television is still the dominant news source for American adults, it has been on a decline -- 57 percent of surveyed adults reported getting their news from television regularly back in 2016. And Pew points out that when you look at online news sources together, so either news websites or social media, it's creeping up to TV as the top source, pulling 43 percent of adults combined. 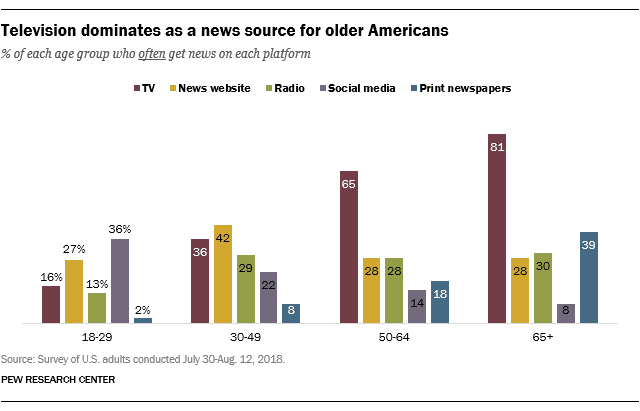 Earlier this year, the Pew Research Center released a study showing 89 percent of surveyed college students said they got at least some of their news from social media. Facebook and, interestingly, Snapchat were the top two platforms for news among the age group.

All products recommended by Engadget are selected by our editorial team, independent of our parent company. Some of our stories include affiliate links. If you buy something through one of these links, we may earn an affiliate commission. All prices are correct at the time of publishing.
View All Comments
More people get their news from social media than newspapers