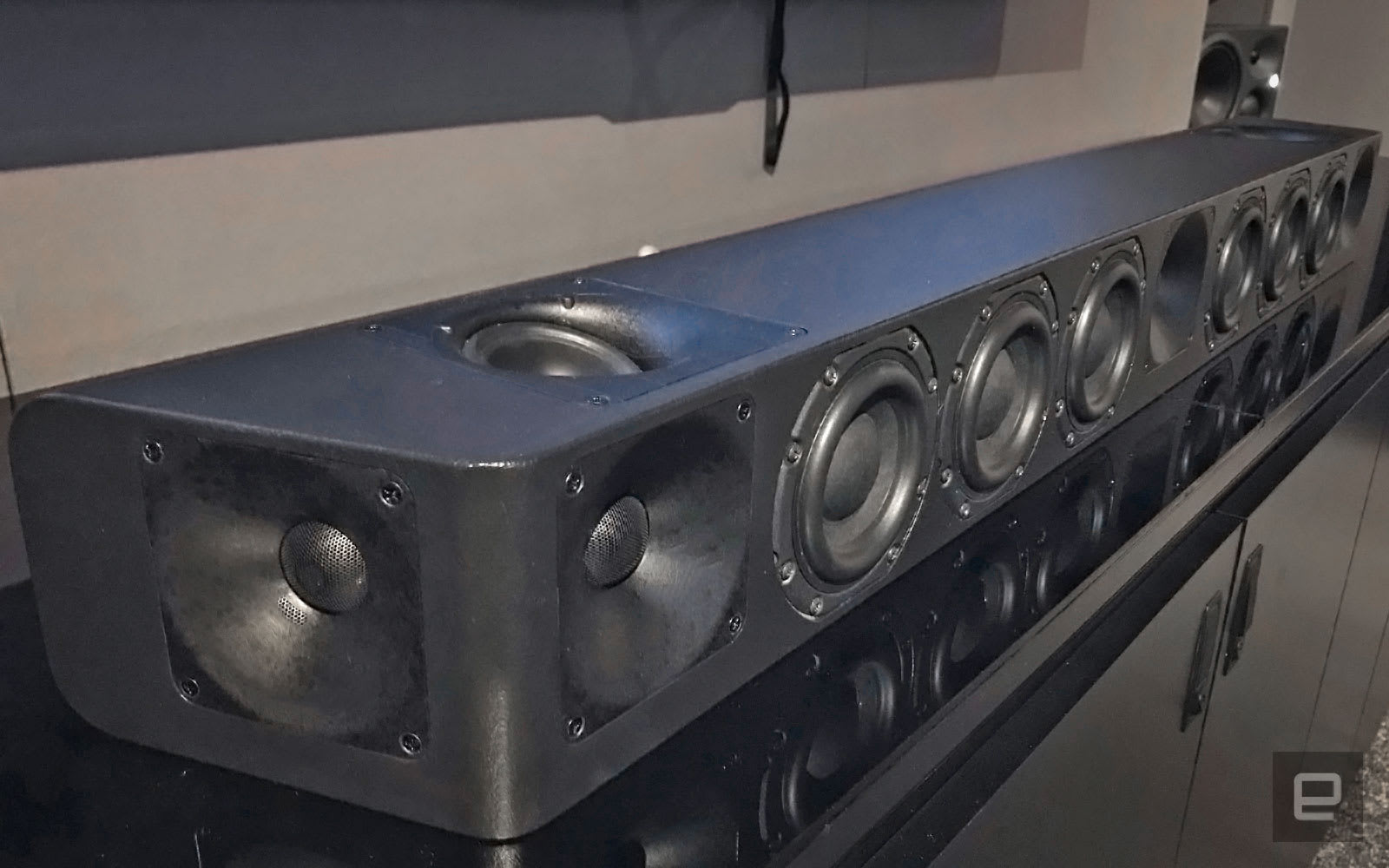 Sennheiser has been touting the merits of its Ambeo 3D audio for a few years now at CES, but in 2018, the company plans to make that spacial soundscape more accessible. The first speaker product to feature the tech will be the Ambeo 3D Soundbar and the company is showing it off here in Vegas. Sennheiser has been working on 3D audio since 2010, when it was recording classical performances in 9.1 surround sound. Until now, you needed a 9.1 speaker setup to really appreciate that level of detail, but later this year, all you'll need is a soundbar.

The device Sennheiser is showing off at CES this year is a prototype, but the company says the audio is final. The Ambeo 3D Soundbar packs 13 speakers total with nine across the front, two angled out from the sides and two angled on the top. While there will be a subwoofer option, you really don't need it because the soundbar has a low-end range of 30Hz -- and it's pretty damn impressive coming from a device like this. Usually you need a separate sub to complement a soundbar for a solid dose of bass. In terms of connectivity, the company says the device will have a trio of HDMI inputs, one HDMI output and inputs for both analog and optical. It's also fully wireless with Bluetooth and WiFi, and there will be voice control onboard. The prototype was also quite large, especially when compared to other soundbars, thanks to its 4-inch speakers. Chances are the final version will be pretty large as well. Not a deal breaker, but it's certainly something to consider.

Of course, not everyone has access to 3D audio recordings, but that won't be a huge issue for a few reasons. One of those is that the soundbar is compatible with Dolby Atmos, so there's a library of compatible content you can tap into there. Sennheiser says it will also upscale, or as the company calls it, "upmix," non-3D audio to sound better on the speaker. As you might expect, it won't sound as good as a recording captured in true 9.1, but it beats having to re-buy your music collection. The company says it is working with music labels on content and other audio companies are enlisting its help for 3D audio capture at live sporting events and more. You can also opt to use the Ambeo soundbar in normal stereo mode as well, in which case you won't have to worry about any tweaks. I didn't get a demo of that mode though, so I can't speak to whether or not it's equally as stunning. 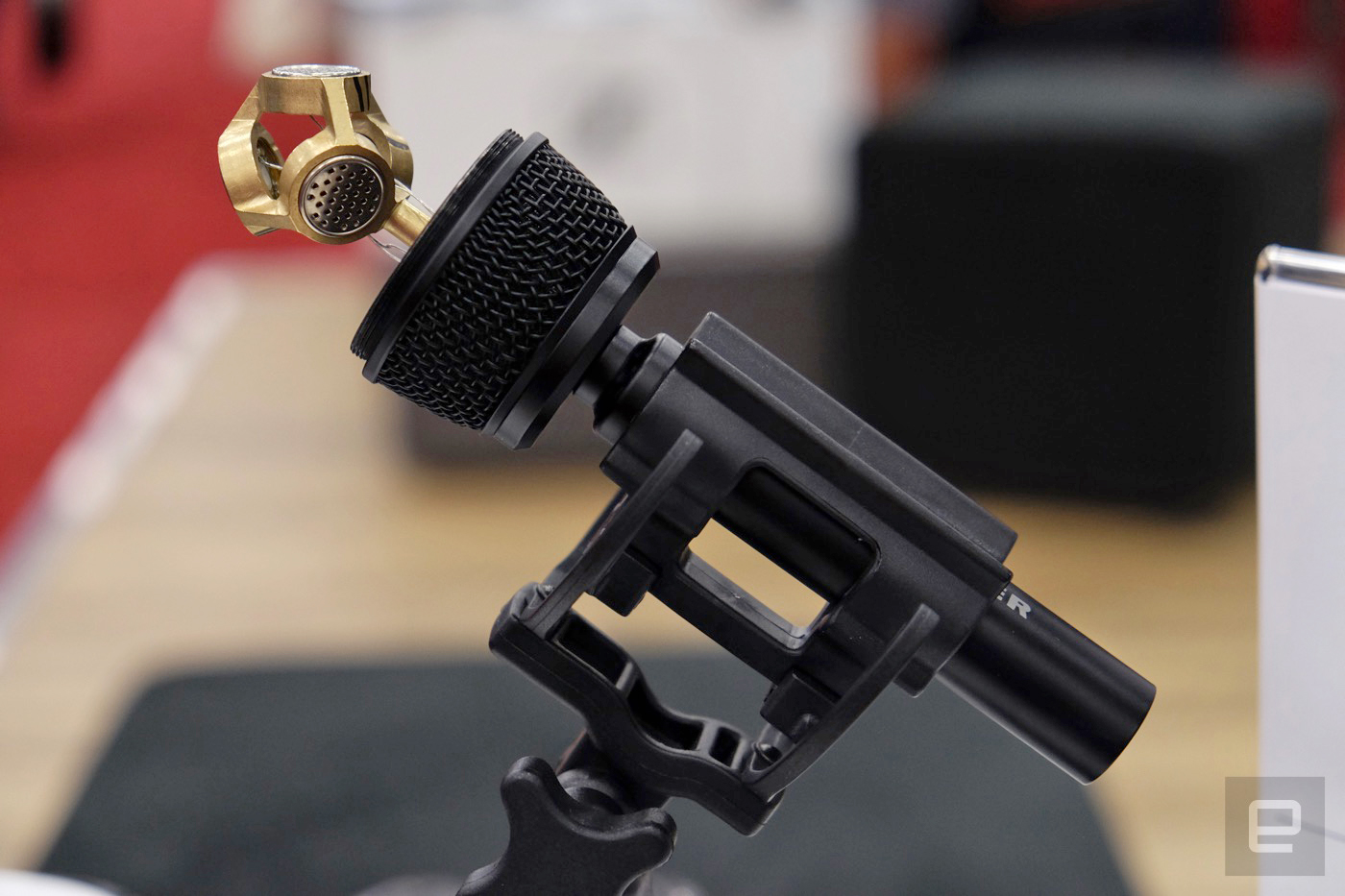 During a 15-minute demo, I heard audio samples ranging from a Mad Max clip to a performance from Imogen Heap captured in true 9.1. I'm not going to mince words here: To say this thing is impressive is an understatement. I've heard Ambeo recordings before, so I know the level of detail and clarity they offer, but to put all of that inside a soundbar is a feat. This piece of gear takes spatial audio like Dolby Atmos to a whole other level, and it's miles above what Sony and others offer as part of their home theater lineup. I have a Sonos Playbar and sub in my living room, and this Sennheiser speaker blows that out of the water, too.

Perhaps the most impressive audio sample during the demo came from a German Bundesliga soccer match. During the clip, you could hear the roar of the crowd change as the players moved from end to end. It very much sounded like I was sitting inside Niedersachsenstadion watching Hanover 96 in person. The music stuff is great, but as a sports fan, this might be more exciting. Of course, the effectiveness relies on a 3D audio capture, but Sennheiser says a number of broadcasters have already started doing so. And thanks to MPEG-H support, you can focus in on the home-supporters section, decrease the volume of the commentary or apply other tweaks to the audio stream to enhance the viewing experience.

During that same demo, Sennheiser switched back and forth between the Ambeo soundbar and a true 9.1 setup. While you could notice the difference, there wasn't a huge change when flipping from one to the other. Again, it's another piece of engineering skill on display when a massive surround sound setup is packed in a single speaker and the difference isn't night and day. The company says the unit on display here isn't the final design, but it has the audio dialed in. And that's great news considering how impressive what I heard was.

As is the case with a lot of things announced at CES, Sennheiser isn't talking price or availability yet. However, it did tell me that this isn't some far-in-the-future concept; it plans to bring the device to market this year. The company shied away from divulging a ballpark price tag, it did say that you can expect to pay more than you would for a soundbar from the like of Sony or LG. That's not a huge surprise based on the audio prowess on display here. Sennheiser caters to audiophiles and everyday users alike with its range of headphone options, so let's hope it appeals to both with the price tag on this soundbar.

In this article: 3daudio, ambeo, amdbeo3dsoundbar, audio, av, ces2018, entertainment, gear, hands-on, sennheiser, soundbar, speaker
All products recommended by Engadget are selected by our editorial team, independent of our parent company. Some of our stories include affiliate links. If you buy something through one of these links, we may earn an affiliate commission.