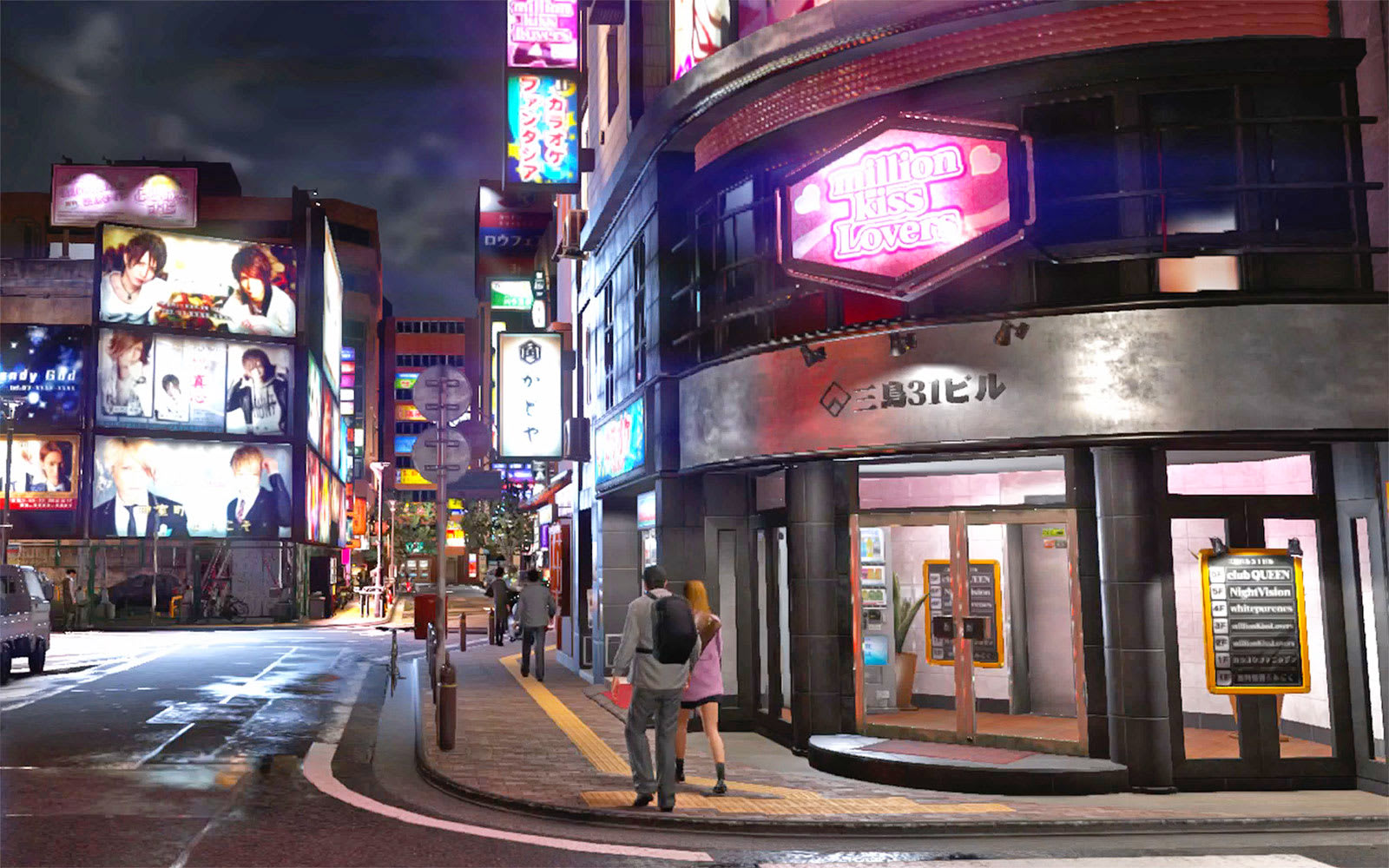 I'm a relatively late fan of Sega's famed Yakuza franchise. It was the 2015 prequel, Yakuza 0 on the PS4, that got me hooked: It was the series' first title to be localized in Chinese, which helped me understand its rich storyline on the humble beginnings of series protagonist Kazuma Kiryu and his strangely charming acquaintance, Goro Majima.

What also fascinated me about these open-world games was how most of the world was based on Tokyo's Kabukicho and Osaka's Dotonbori, often with incredible attention to detail.

For Yakuza 6: The Song of Life due on April 17th, the game is once again set in the Kabukicho-like Kamurocho, with a second stage set in a part of Hiroshima, where Kiryu would eventually stumble upon a big secret later on.

I've yet to make it to Hiroshima in real life, but during one of my recent trips to Tokyo, I decided to swing by Shinjuku to see how closely Sega's realization stands up. With real restaurants, hotels and attractions digitized in high detail, it's occasionally uncanny. 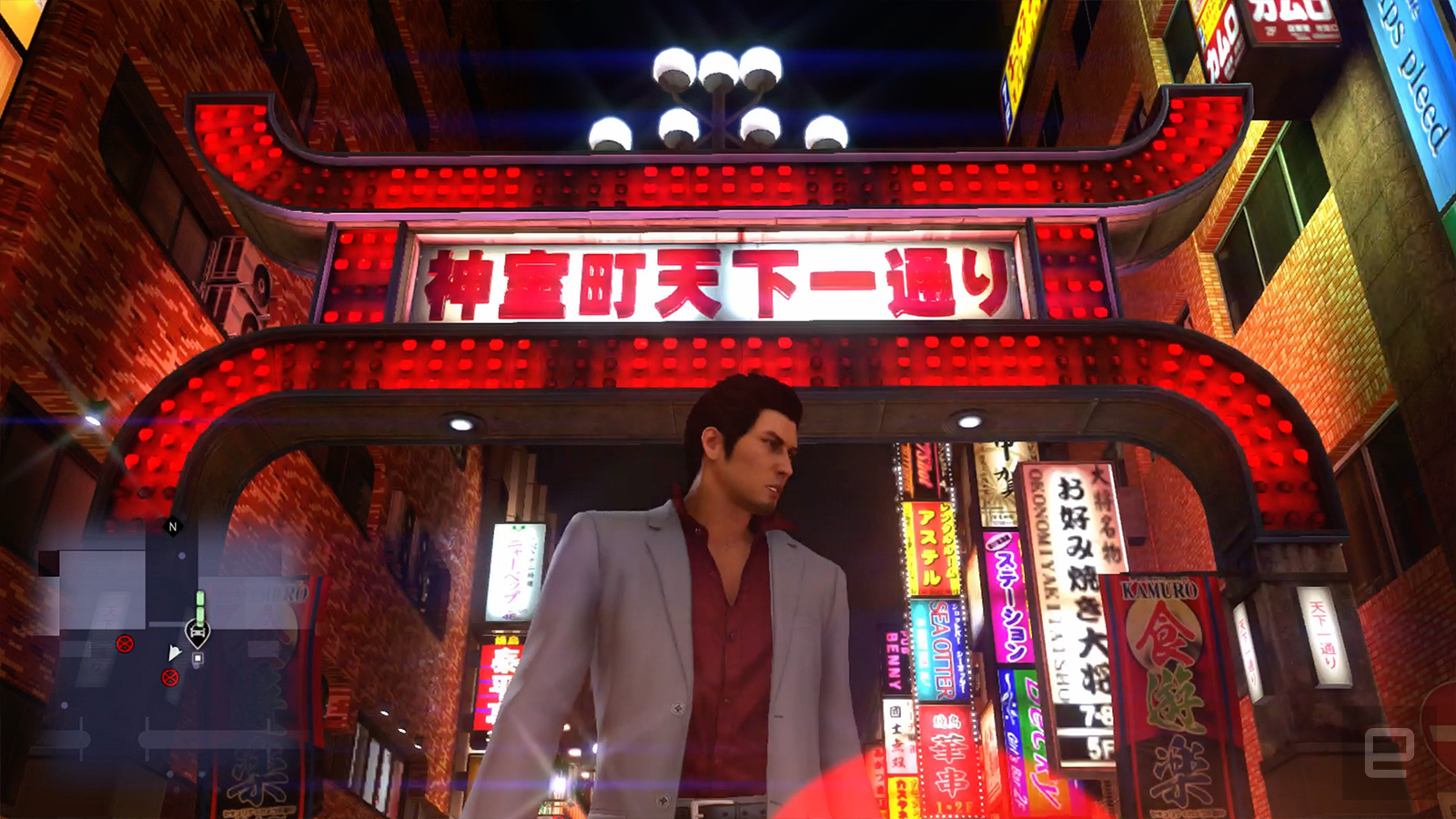 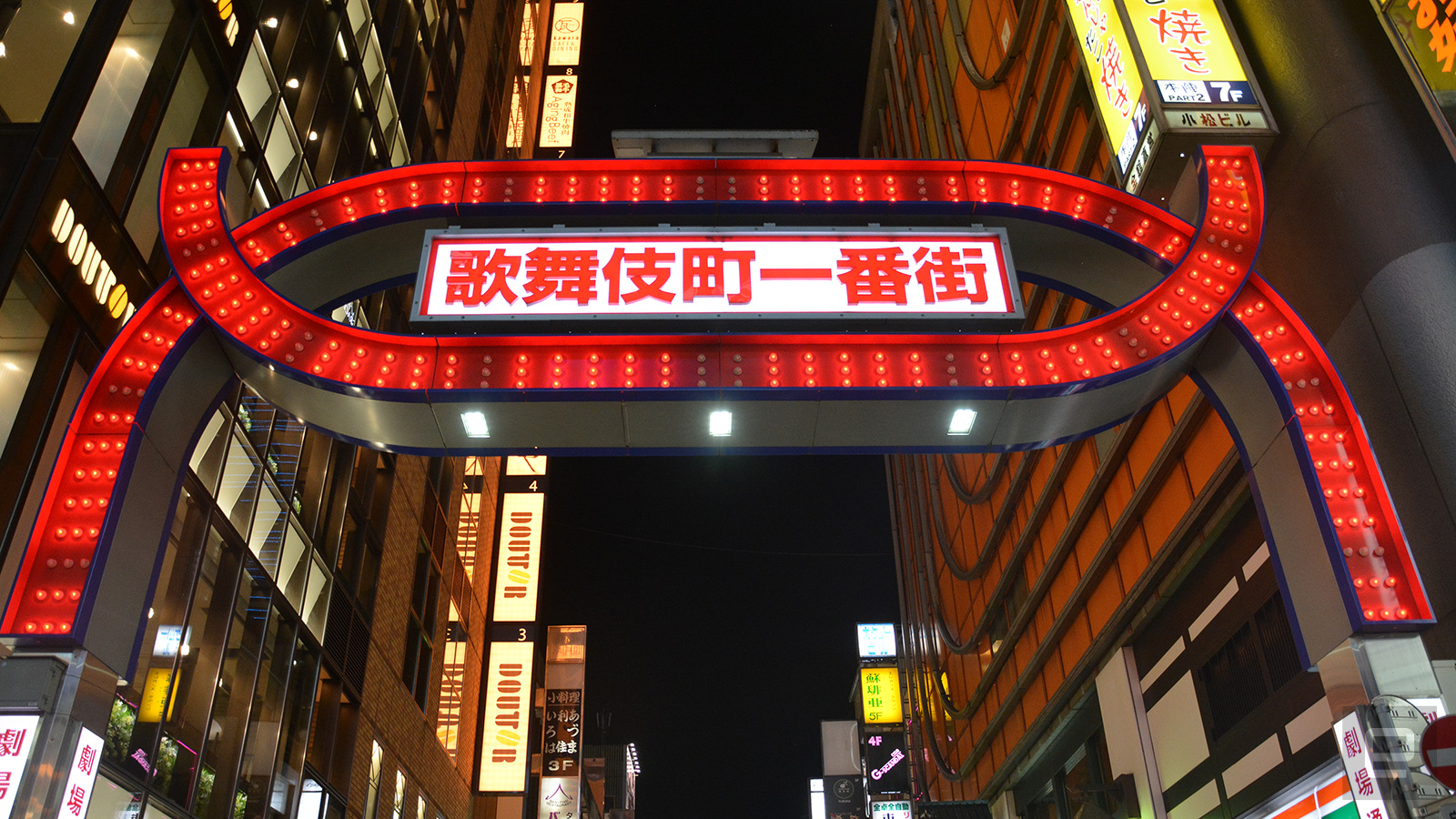 This neighborhood is pretty much where the main story line starts for each game in the series. The signage for this Kamurocho Tenkaichi Street shares a familiar design with the real one for Kabukicho Ichibangai in Shinjuku. Note the barrage of signs that light tiny windows and scattered traffic cones and bikes. The latter two might double as weapons, but Tokyo IRL has 'em everywhere too. 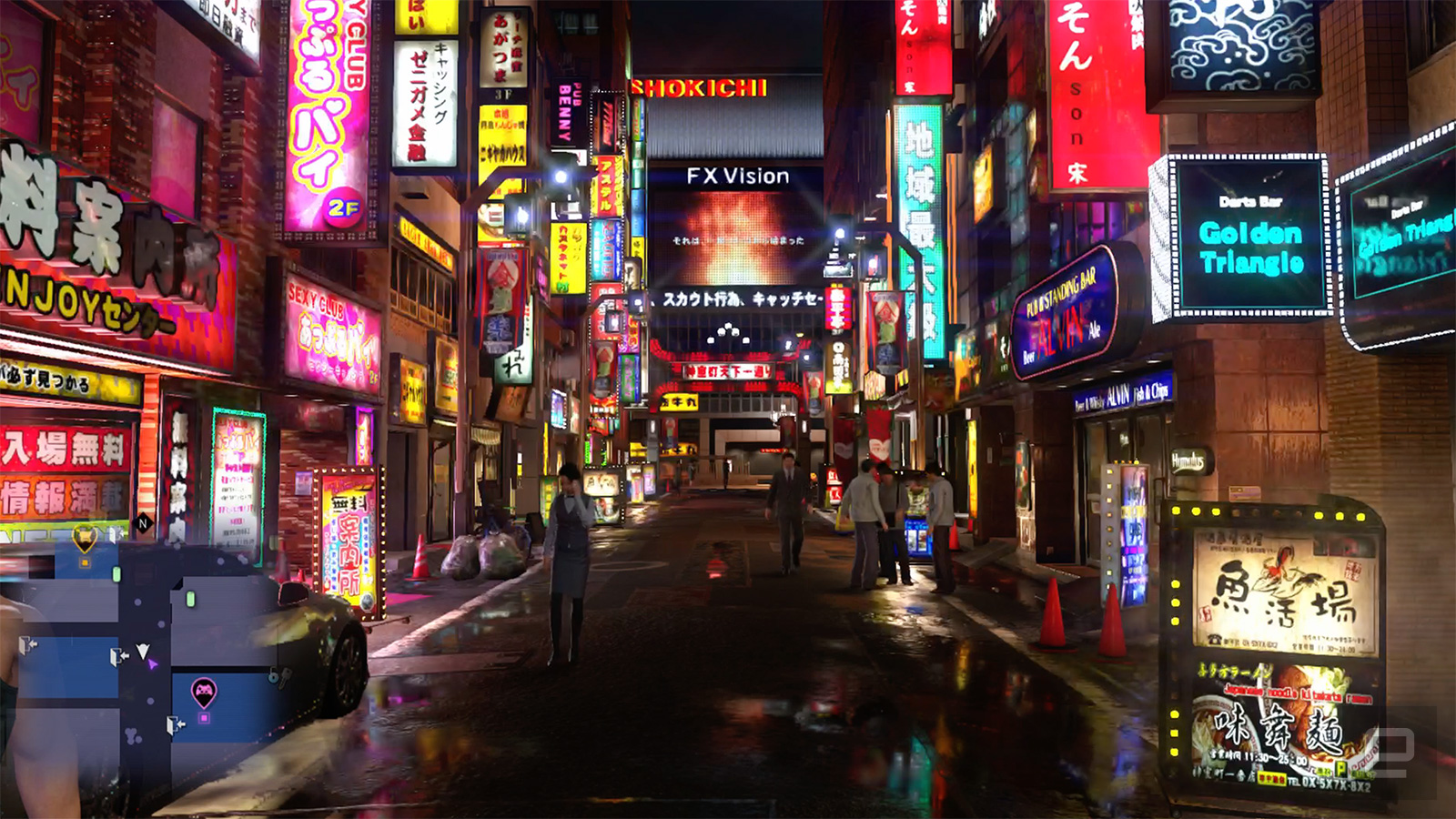 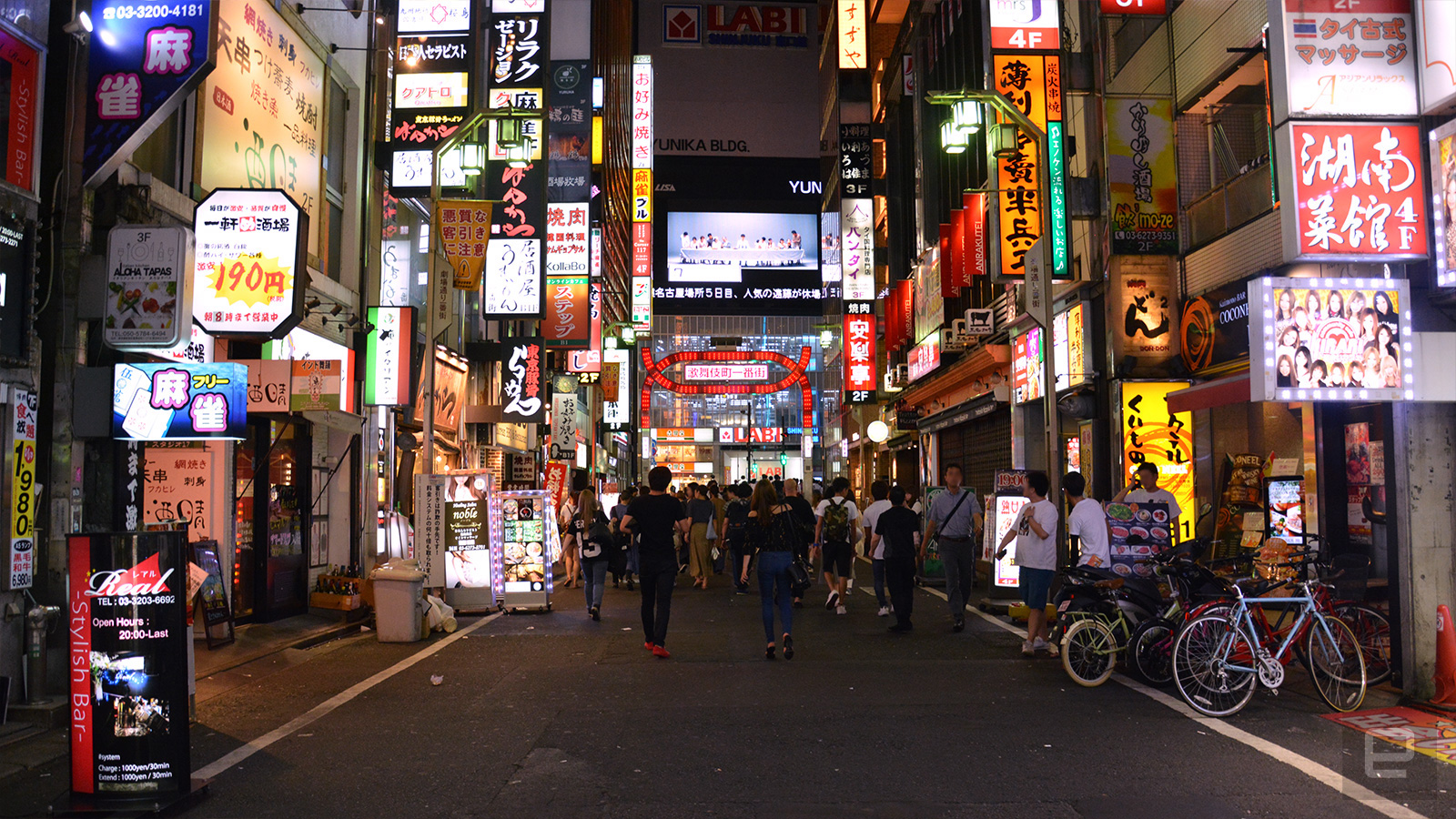 Here's Kamurocho Tenkaichi Street (or Kabukicho Ichibangai) as viewed from the other side. You can see the same lamppost design in both worlds and even spot the fictional Shokichi Camera electronics store across the road in the far end, which is actually a Labi -- also an electronics chain -- in real life. Even though Labi is missing out on this marketing opportunity, the Yakuza team still applied a similar design to the fake store logo, possibly just for giggles. 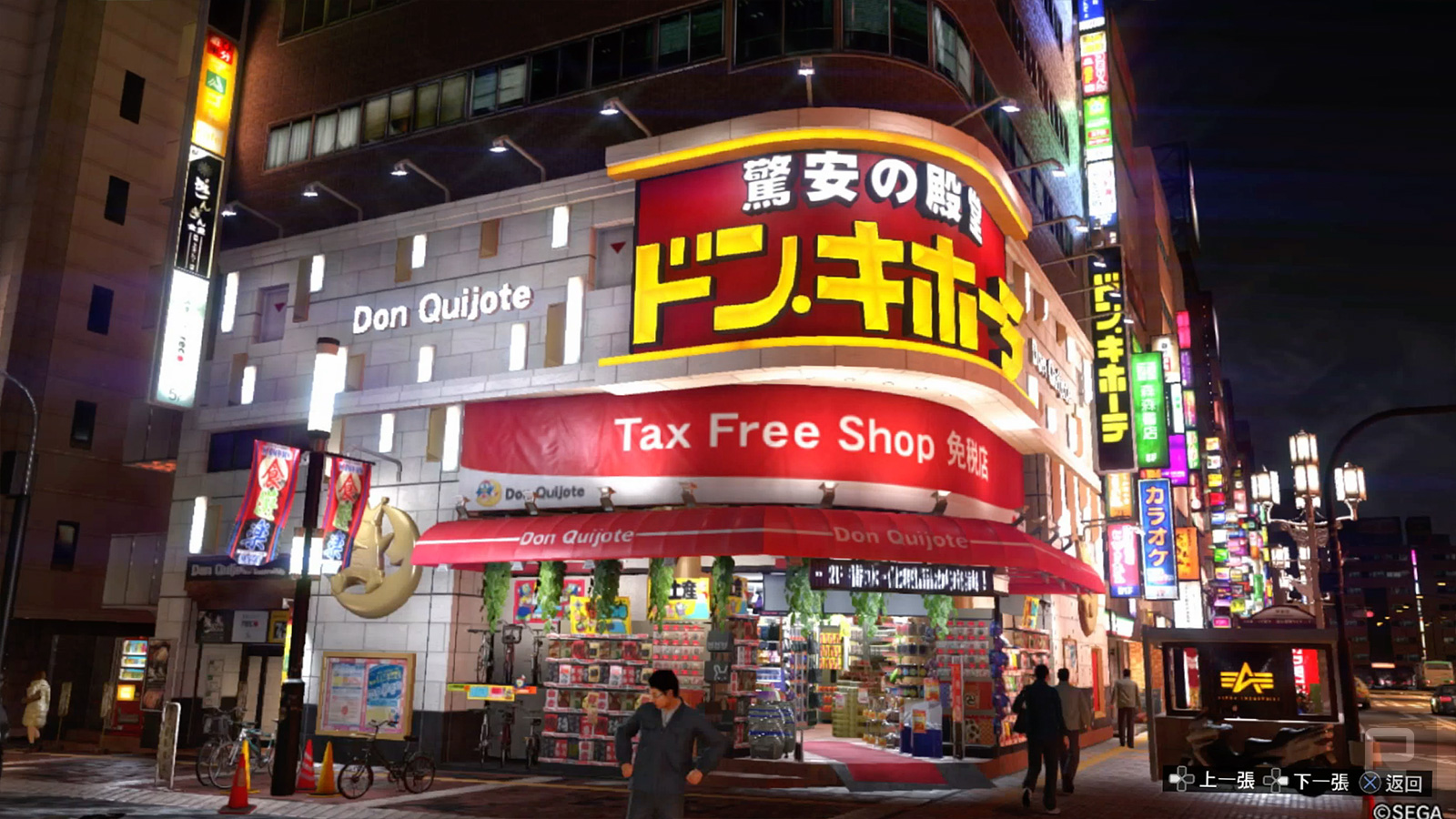 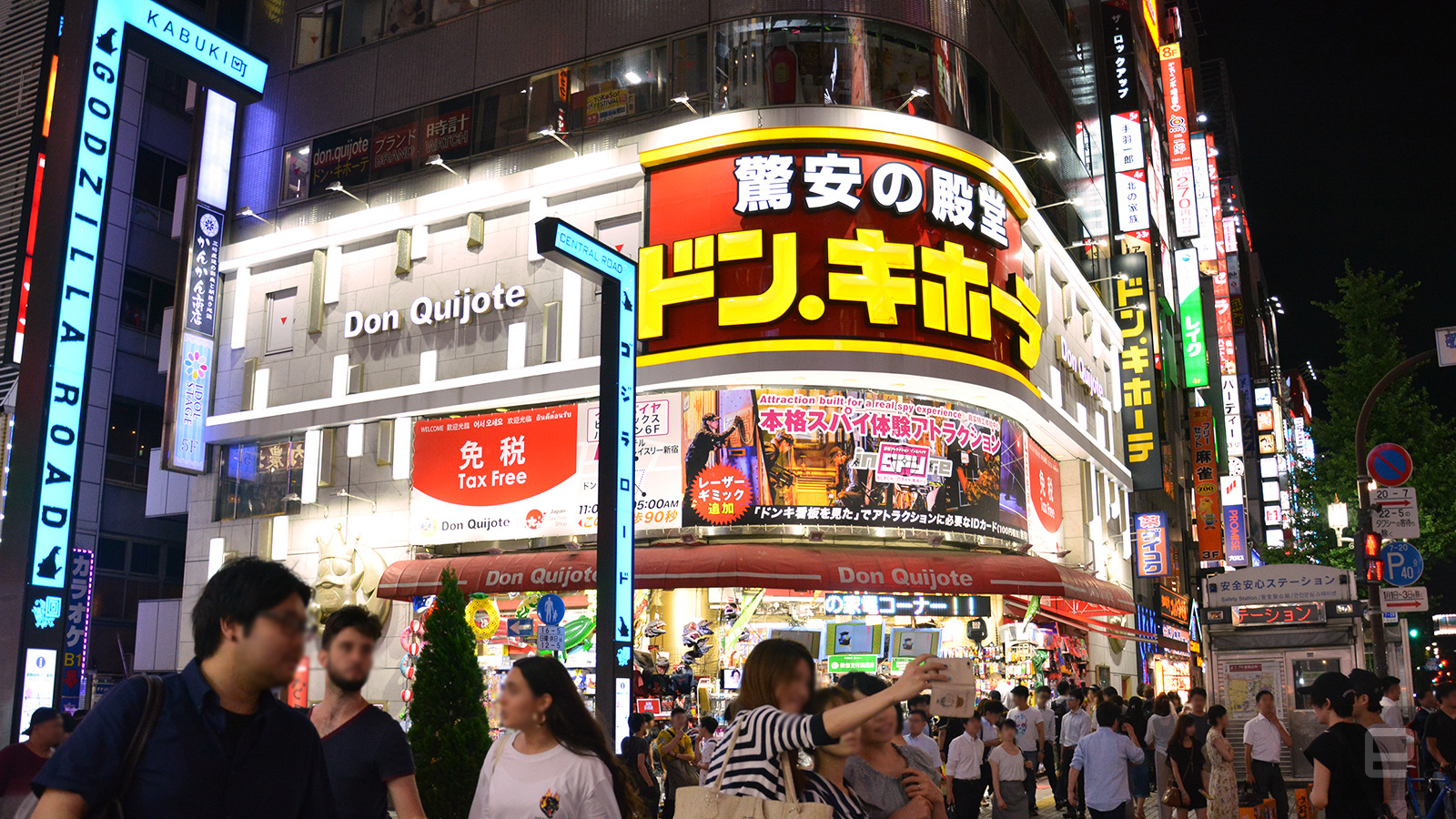 Don Quijote, aka Donki, is a well-known discount chain store in Japan, and it's been featured in the Yakuza series since its first release (and it's been selling the games since the second installment). Think Pikachu onesies, rice cookers, bikes, headphones, matcha-flavored Kit-Kats and sex toys, all in one place. Part of the store layout here in the game was surprisingly similar to what I saw in real life, though the game only offers one floor to explore. The Yakuza series isn't the only game franchise to replicate Tokyo in detail: Persona 5 somehow managed to recreate the chaos of Shibuya, train station and all, faithfully. It didn't, however, have the brand clout that Yakuza apparently wields.

Real Japanese eateries such as Sushi Zanmai and Cafe Pronto are dotted around the game as well, though you might not find them at the same locations in the real world. Kiryu can also get a membership at fitness chain Rizap in order to boost his various stats -- and gets his own before-and-after montage in the process.

It's also worth pointing out that you can buy items that exist in real life, mainly beverages (Suntory has also been a longtime collaborator since the first release) and medicines. Kiryu even uses a Sony Xperia XZ, which is a nice upgrade from his old feature phone -- at least he can take selfies now. 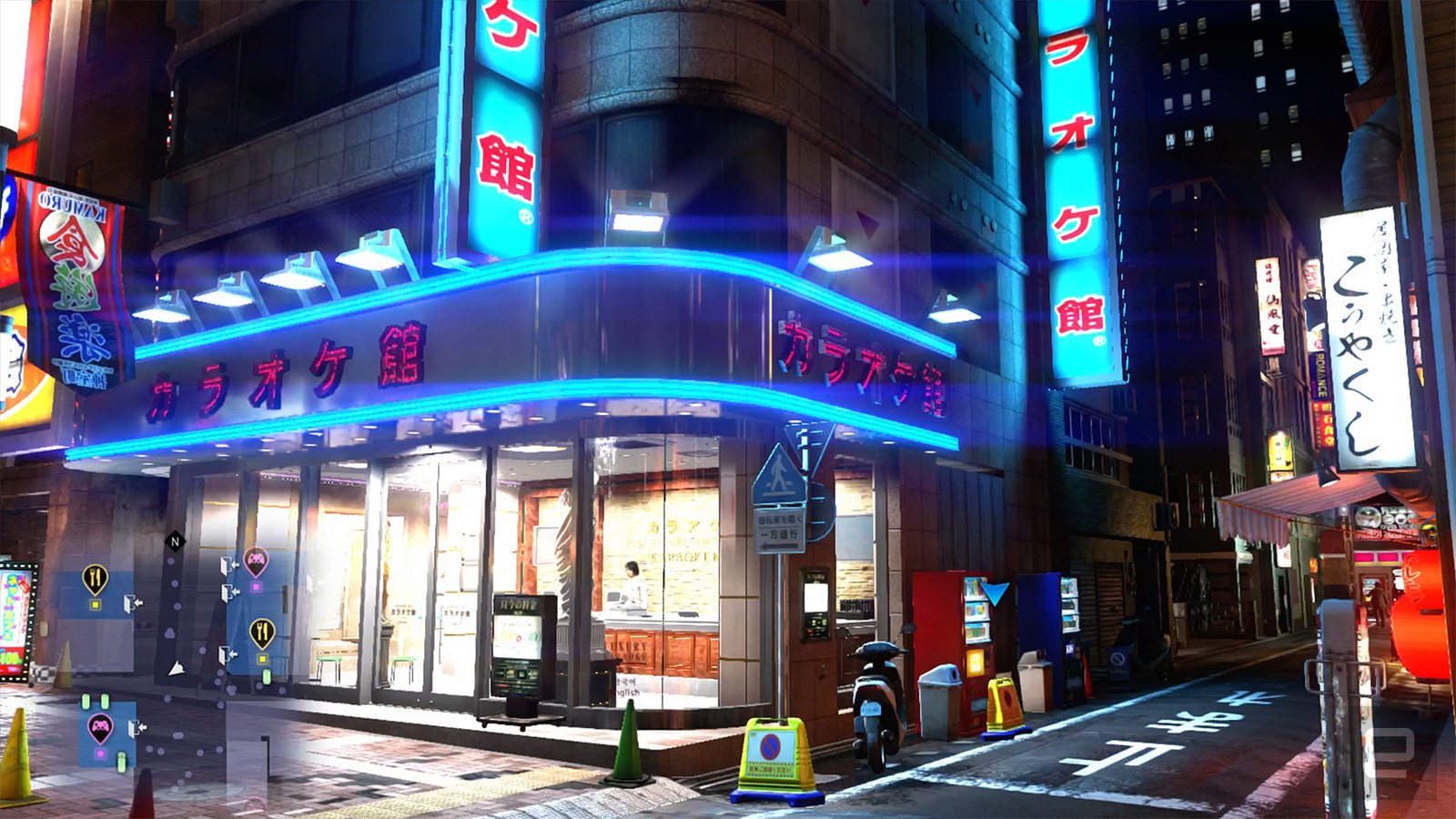 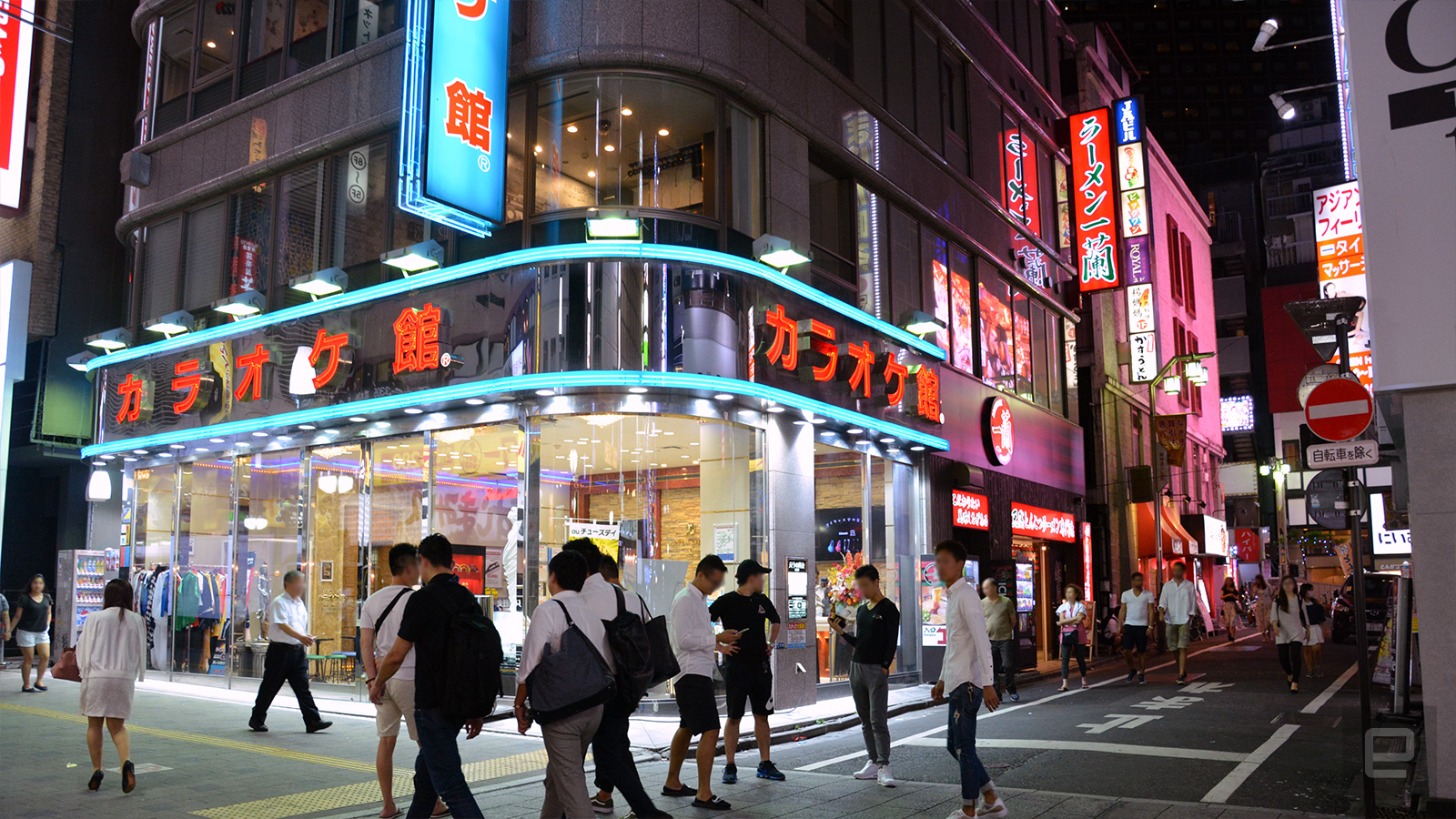 Another iconic brand dotted around the game is Karaoke Kan, which has been featured since Yakuza 3. Again, the similarity is impressive, to say the least. You can actually walk in and play a karaoke-themed game to let Kiryu practice his deep voice. 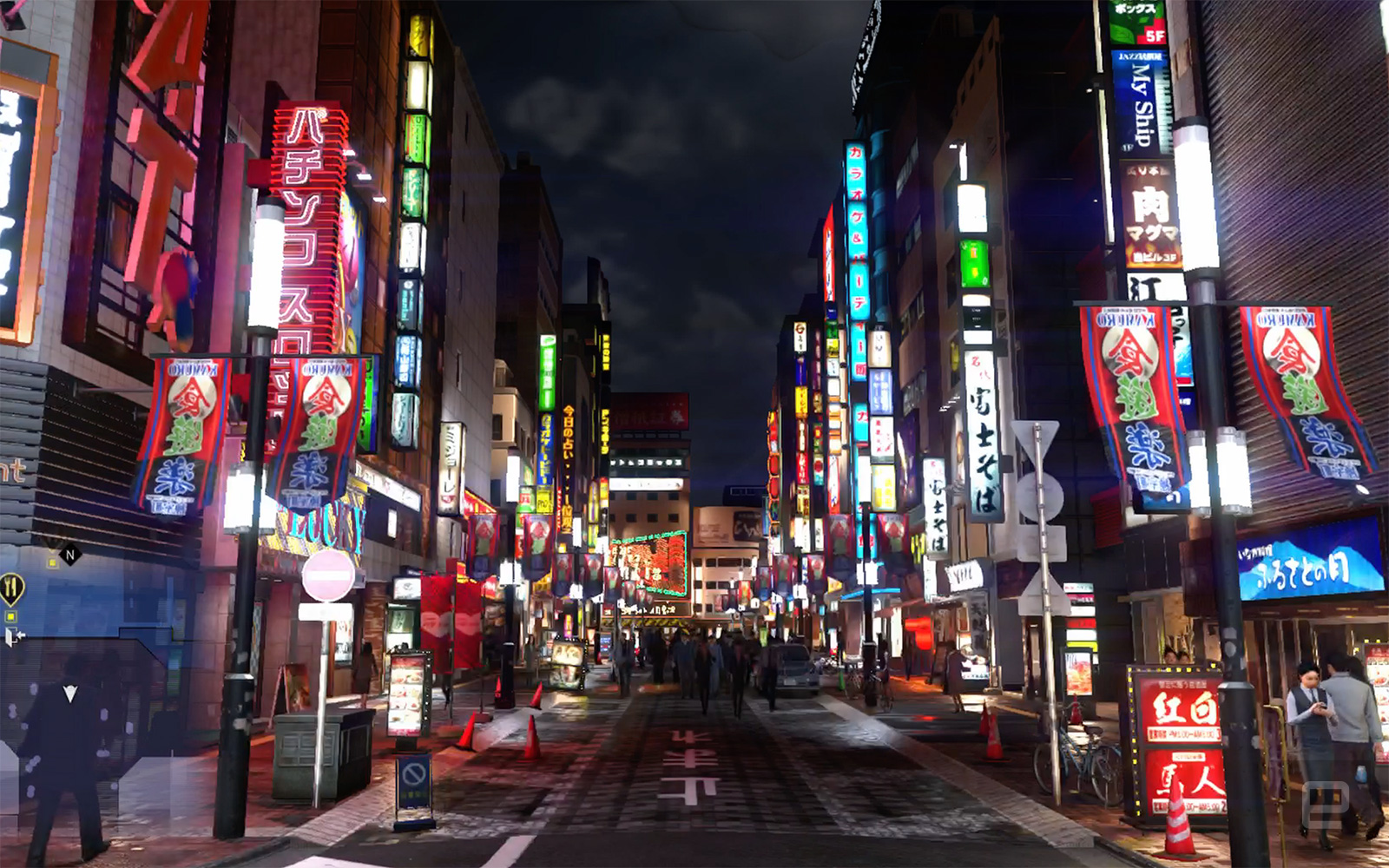 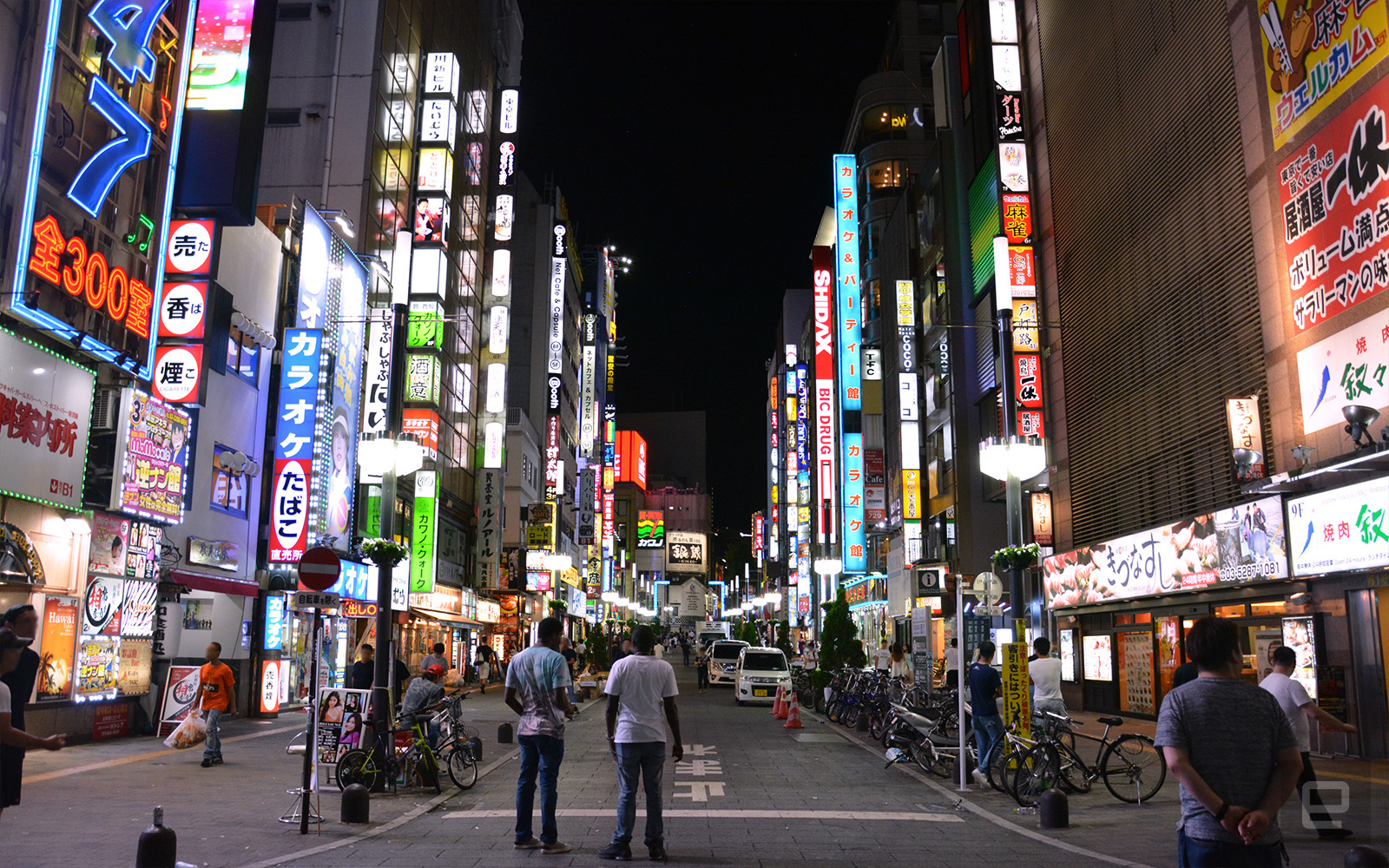 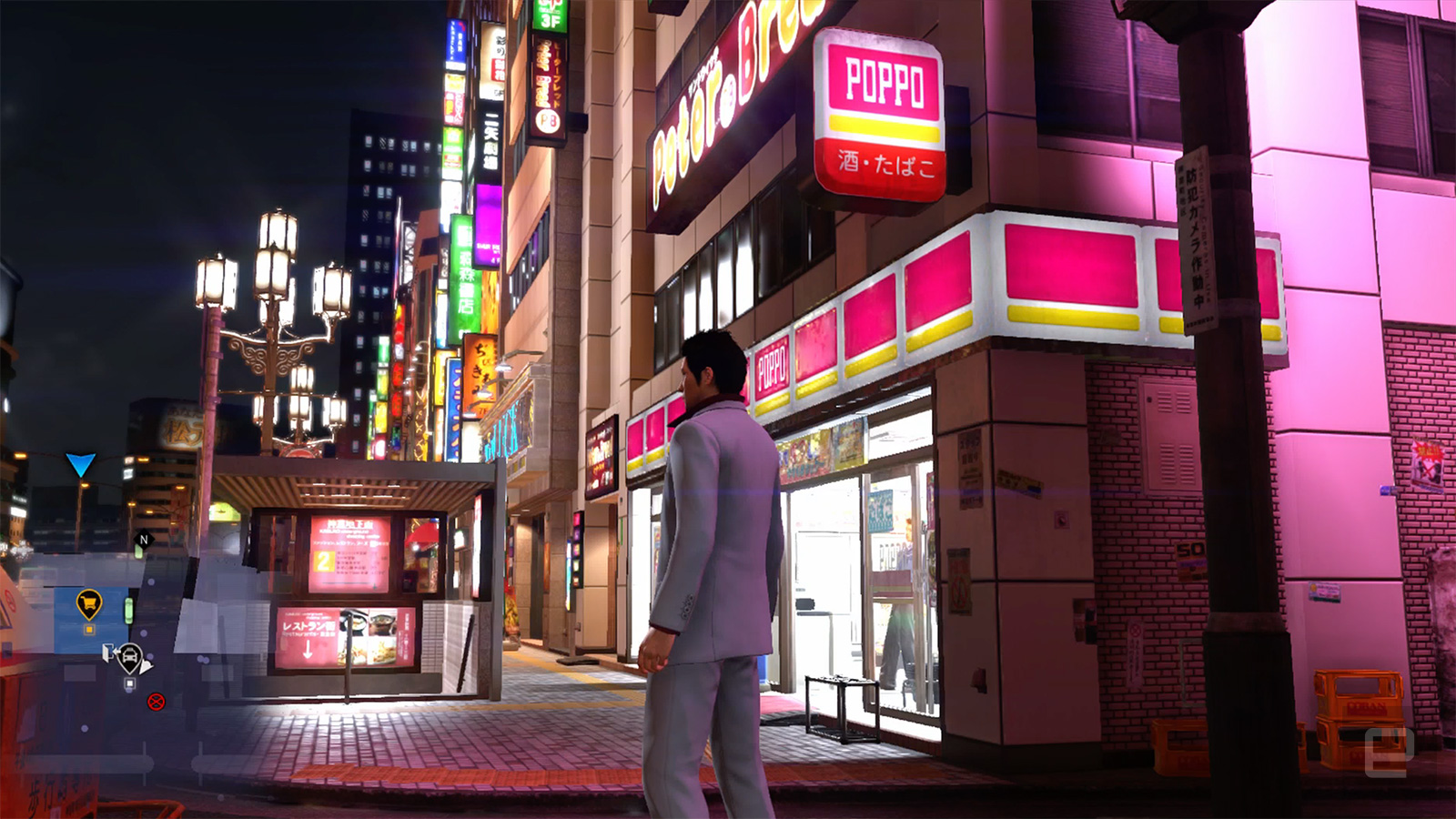 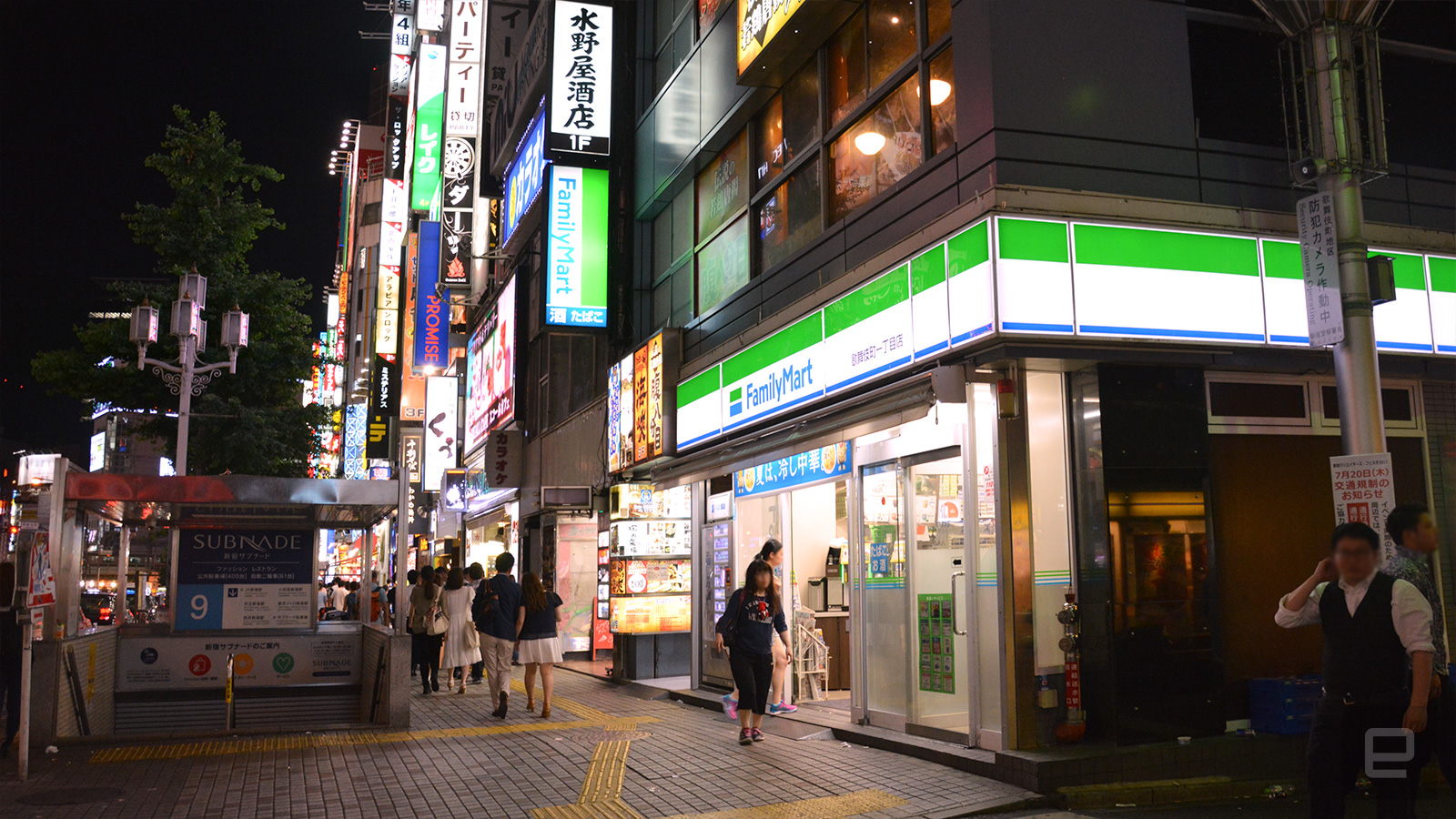 Alas, Japanese convenience store FamilyMart didn't participate in the tie-in, but the game still placed a fictional Poppo store in the same spot here at one end of Pink Street. Speaking of, Yakuza 6 is the first title in the series that lets you walk seamlessly in and out of stores and restaurants. Just try not to bring your fights into those establishments -- they don't like that. (Although there's a special move that involves the shop assistant helping beat the thugs with a microwave -- really.) 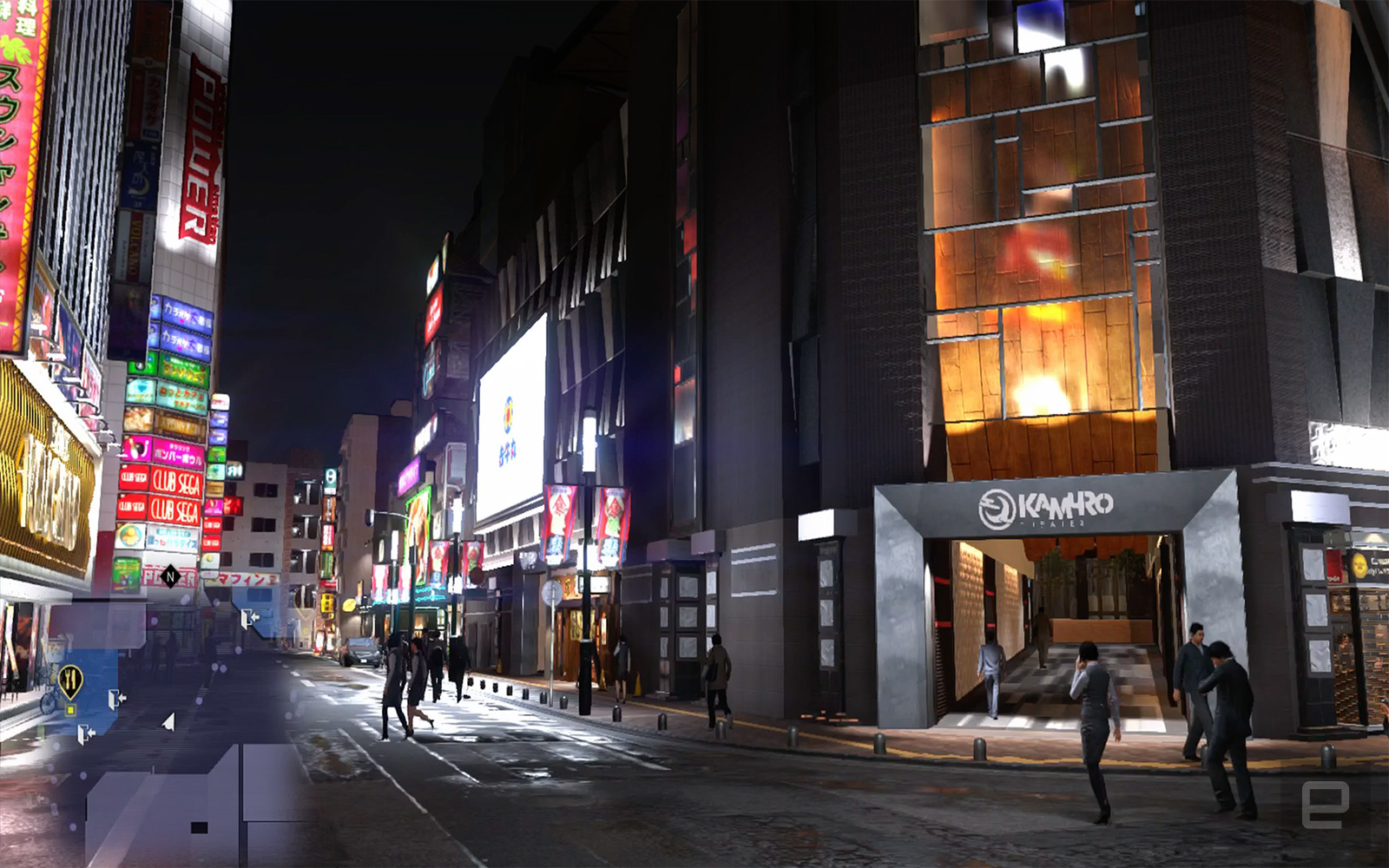 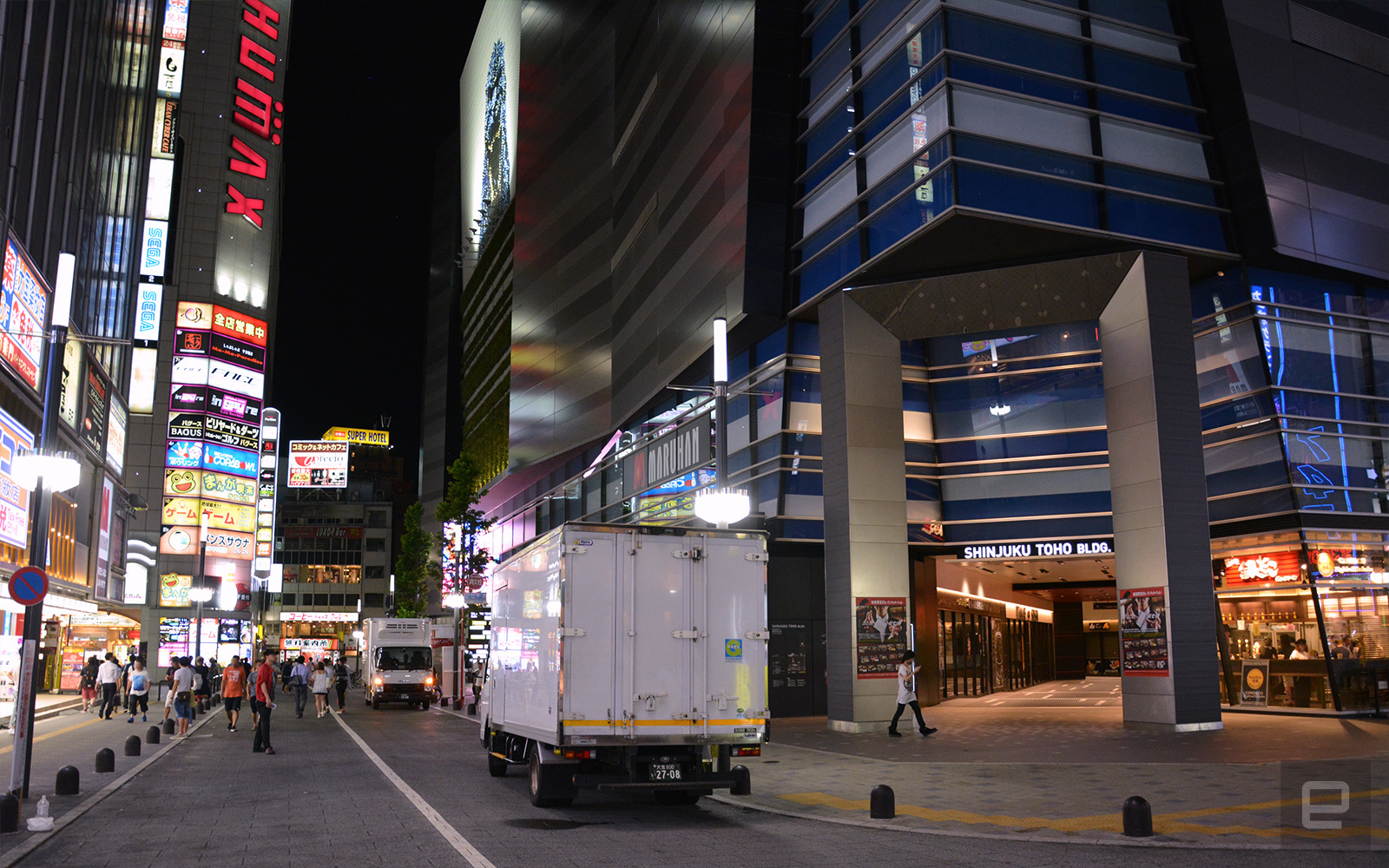 Yakuza 6's Kamurocho has a fancy Kamuro Theater complex in the middle, which parrots Kabukicho's Shinjuku Toho Building, a site most famous for its massive Godzilla head that roars and spits steam nine times per day. The inside, however, is less interesting than the real deal. 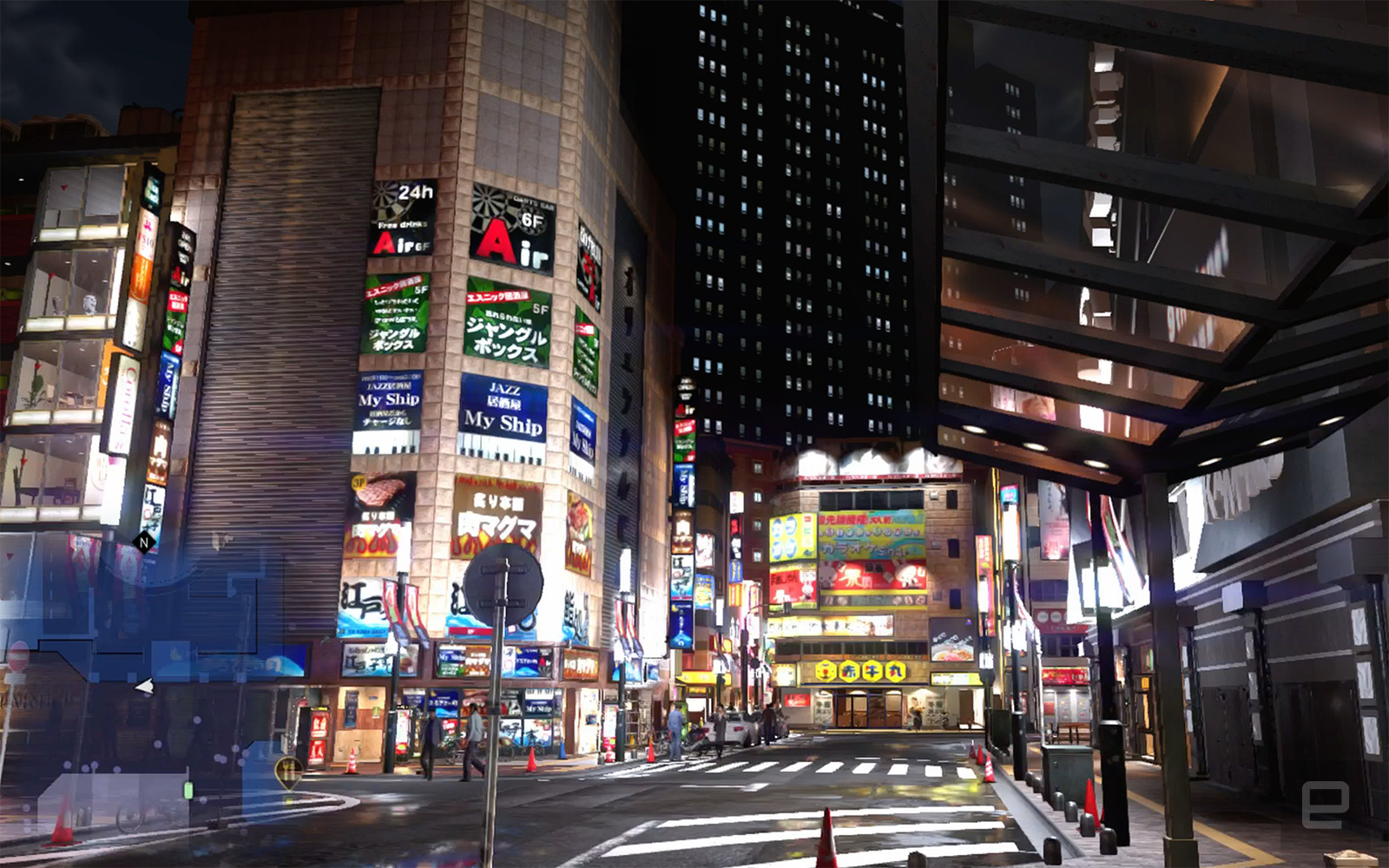 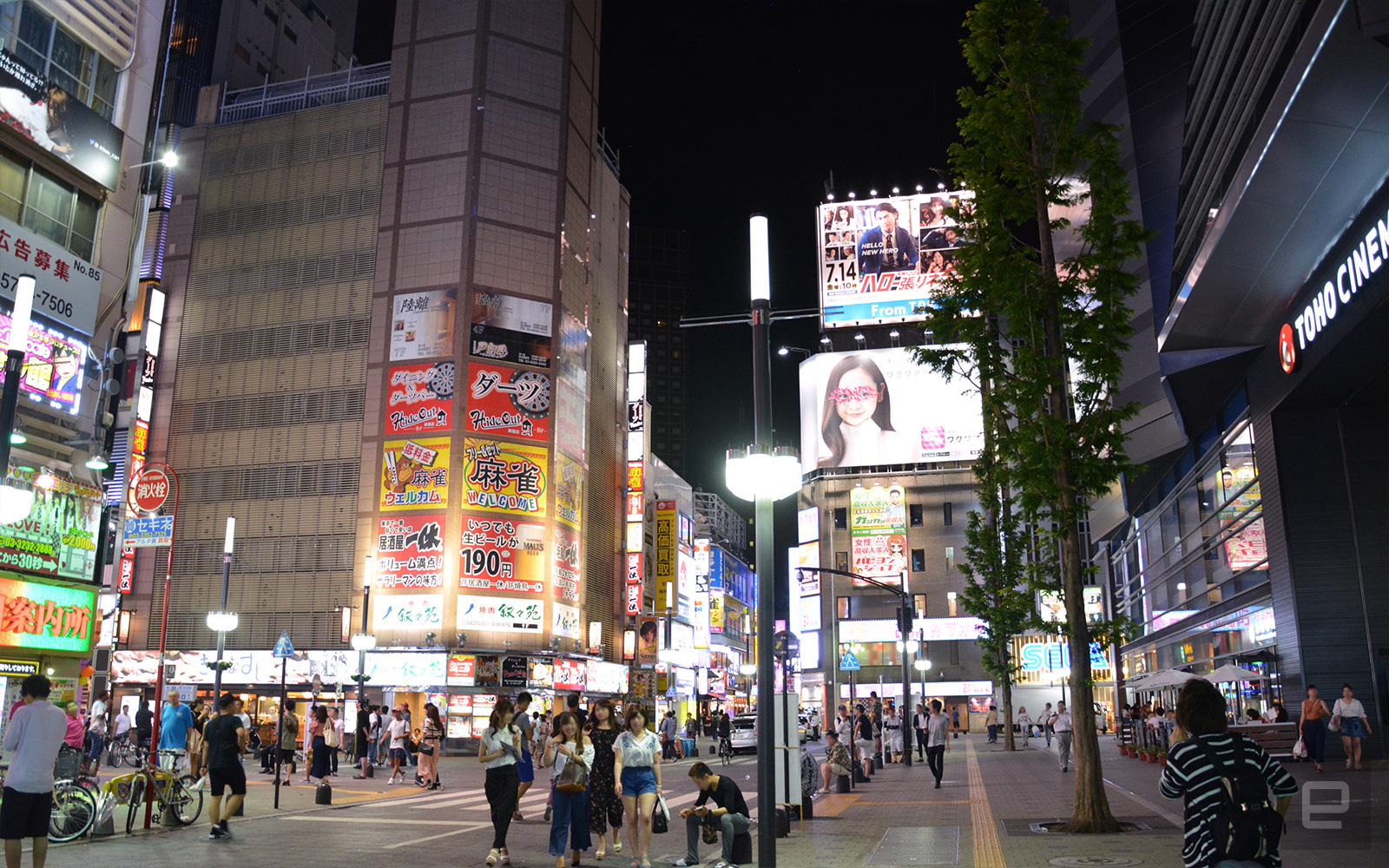 Here's the side of Kamuro Theater/Shinjuku Toho Building facing Nakamichi Street/Kabuki Central Road. Again, note how the game has preserved some of the building designs plus signage layouts. The size and scale are spot on. 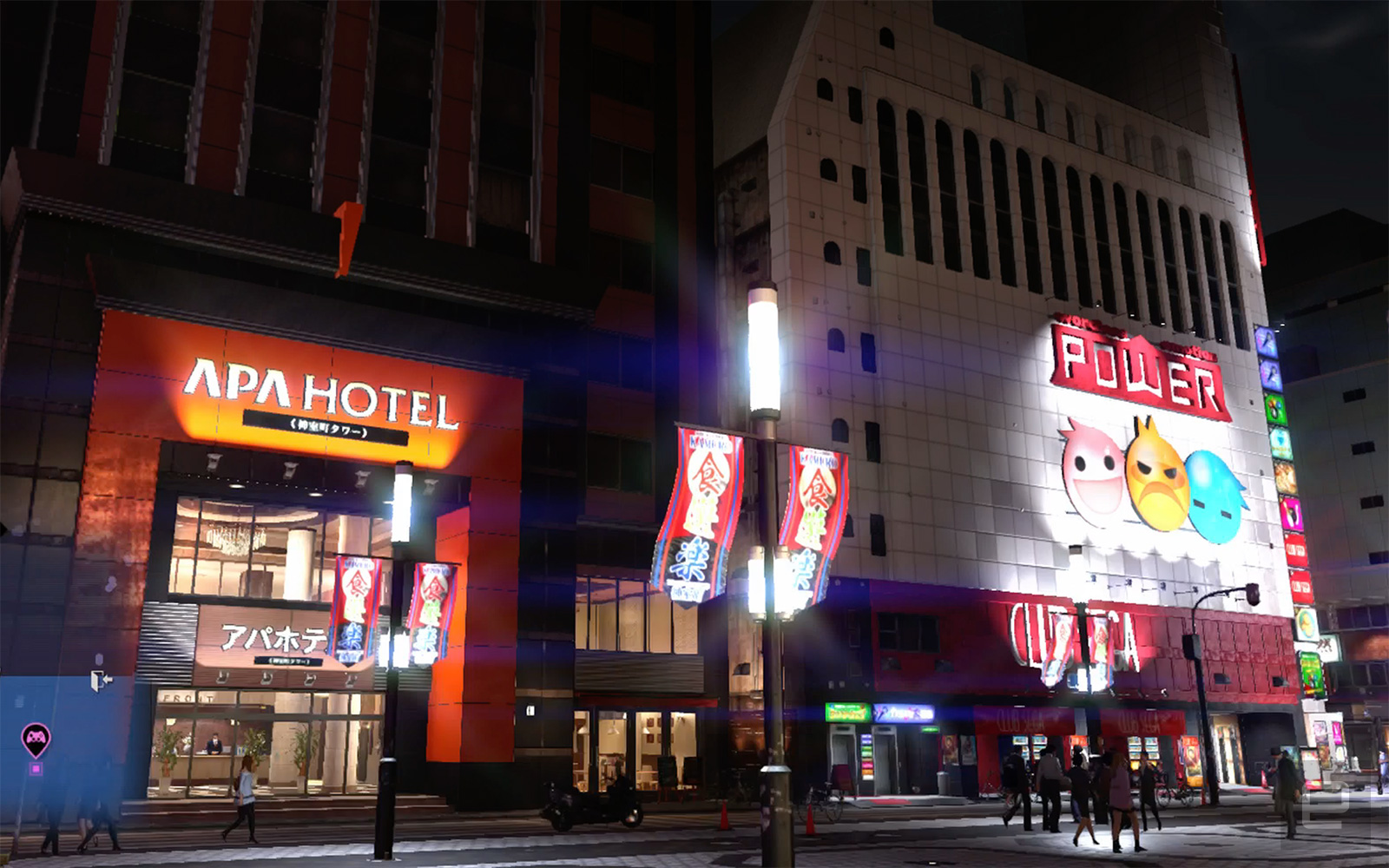 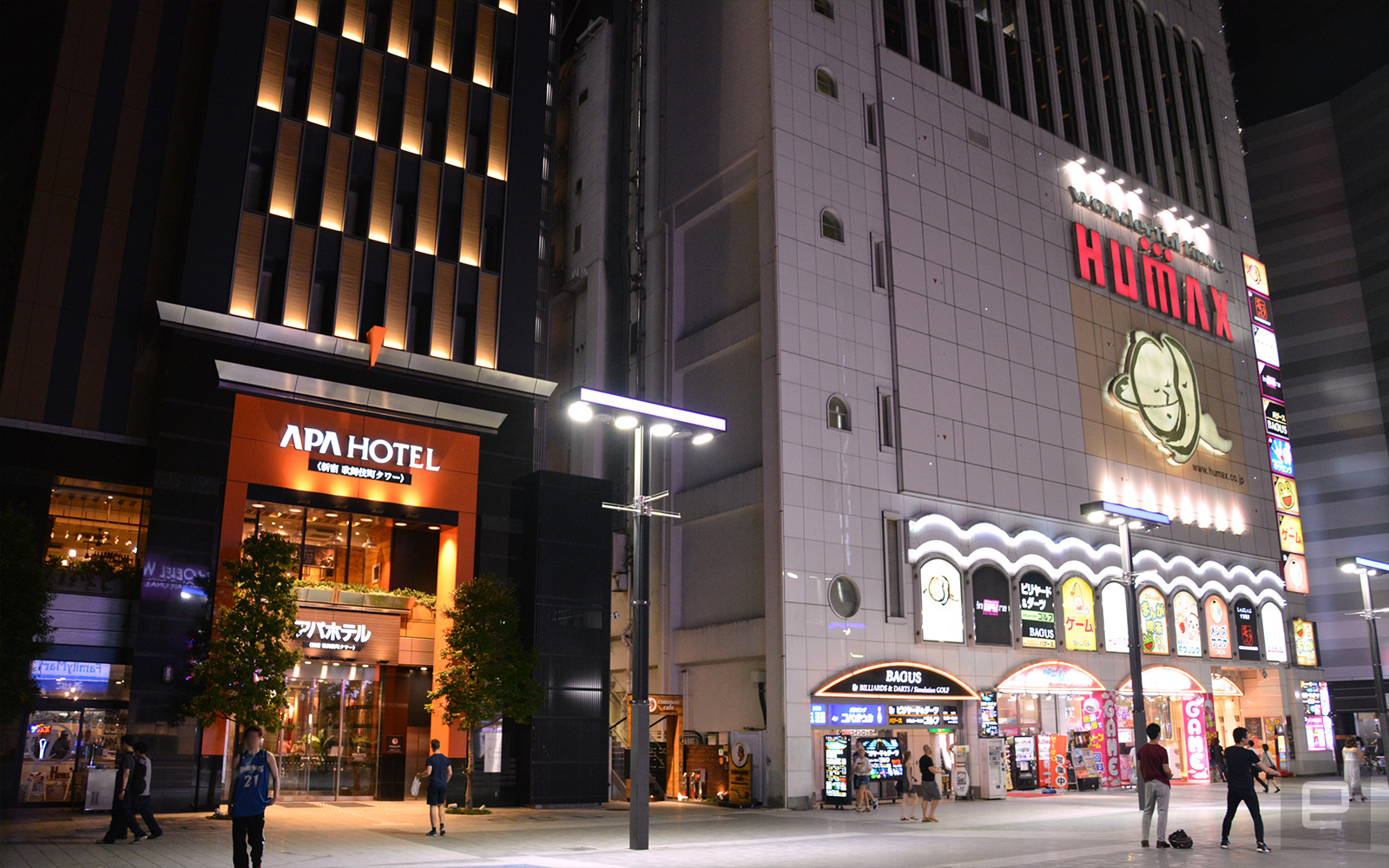 The APA Hotel in the game is a tad bigger than the one in real life (which is right by VR Zone Shinjuku, by the way), but it's otherwise an impressive copy that's hard to miss. 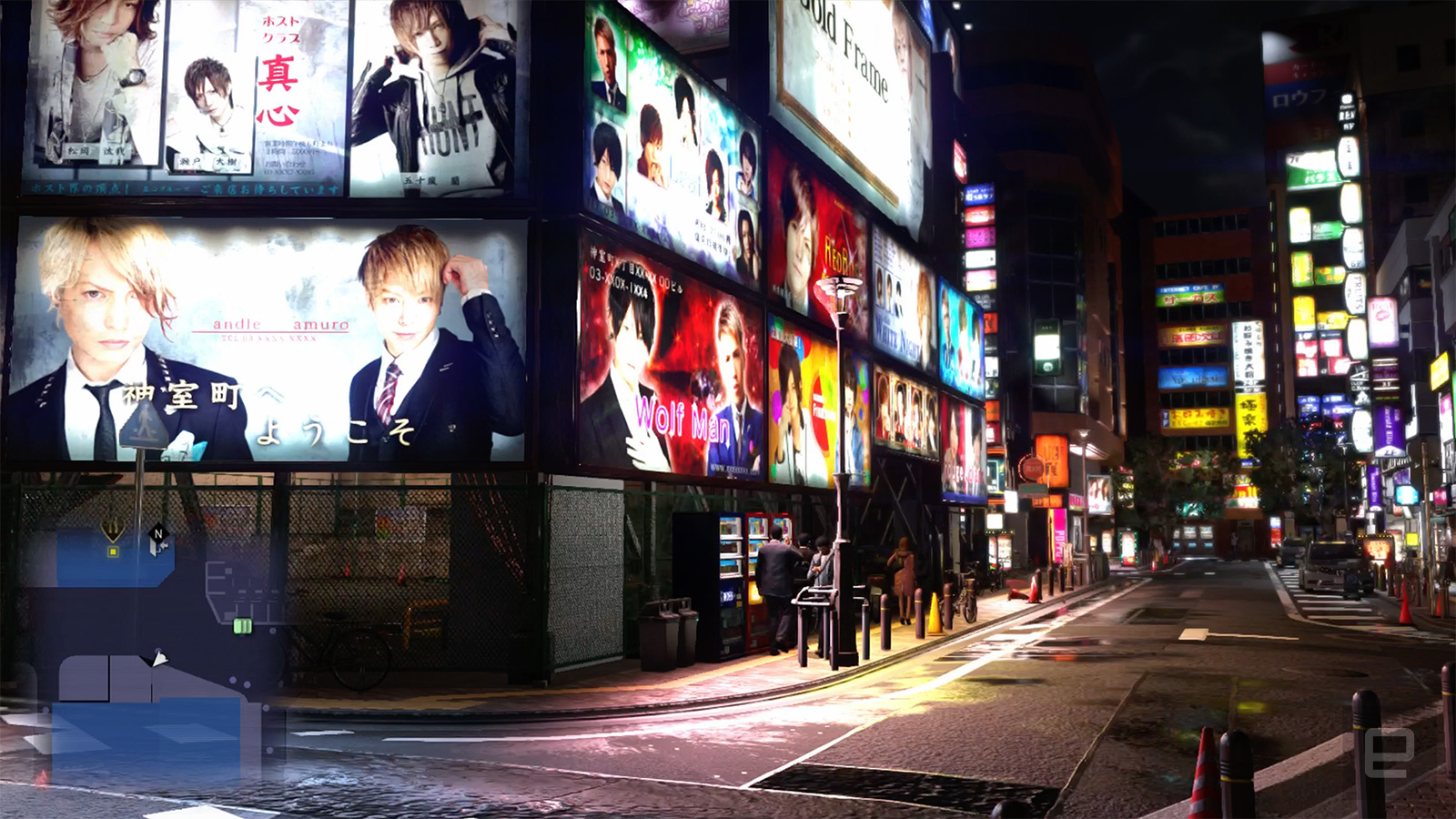 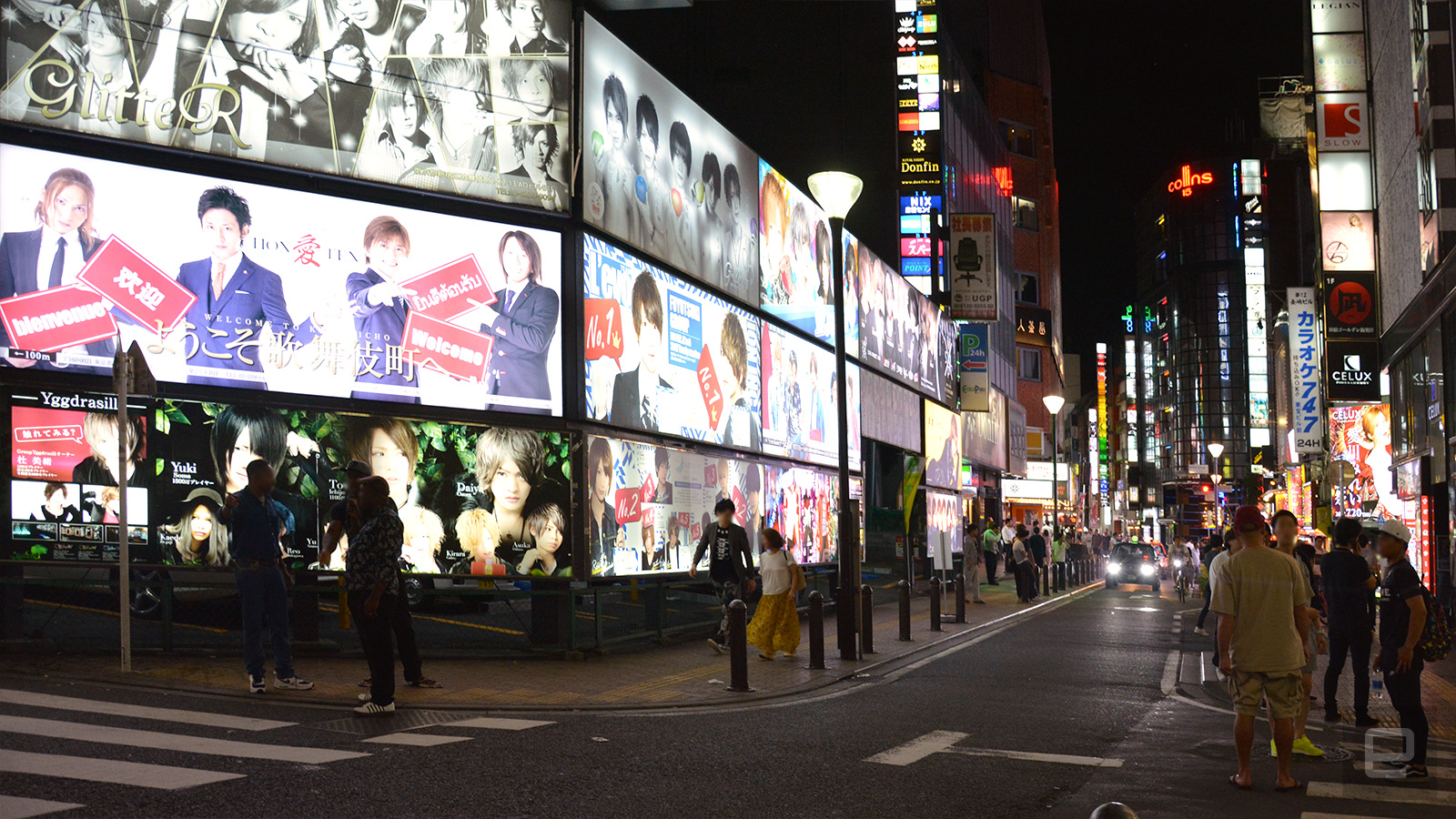 Last but not least, here's a snapshot of the fictional East Shichifuku Street, which features a near-identical outdoor car park with familiar-looking billboards promoting nearby ... venues. Having had many strangers approaching me to solicit "business" there in the real world, I much prefer the quieter street in the game.

Thanks to the simultaneous Chinese launches in Hong Kong, where I'm based, I picked up Yakuza 6 well ahead of the Western launch, which is now penned for mid-April. That's OK, because the localization is well worth the wait for such a story-heavy series; you definitely won't want to skip the emotional cinematics -- or the appearance of Beat Takeshi.

Mat Smith, the man who introduced me to Donki, also contributed to this article.

In this article: av, design, featured, features, game, gaming, japan, kabukicho, kamurocho, playstation, playstation4, ps4, ryugagotoku, ryugagotoku6, sega, shinjuku, tokyo, yakuza, yakuza6
All products recommended by Engadget are selected by our editorial team, independent of our parent company. Some of our stories include affiliate links. If you buy something through one of these links, we may earn an affiliate commission.