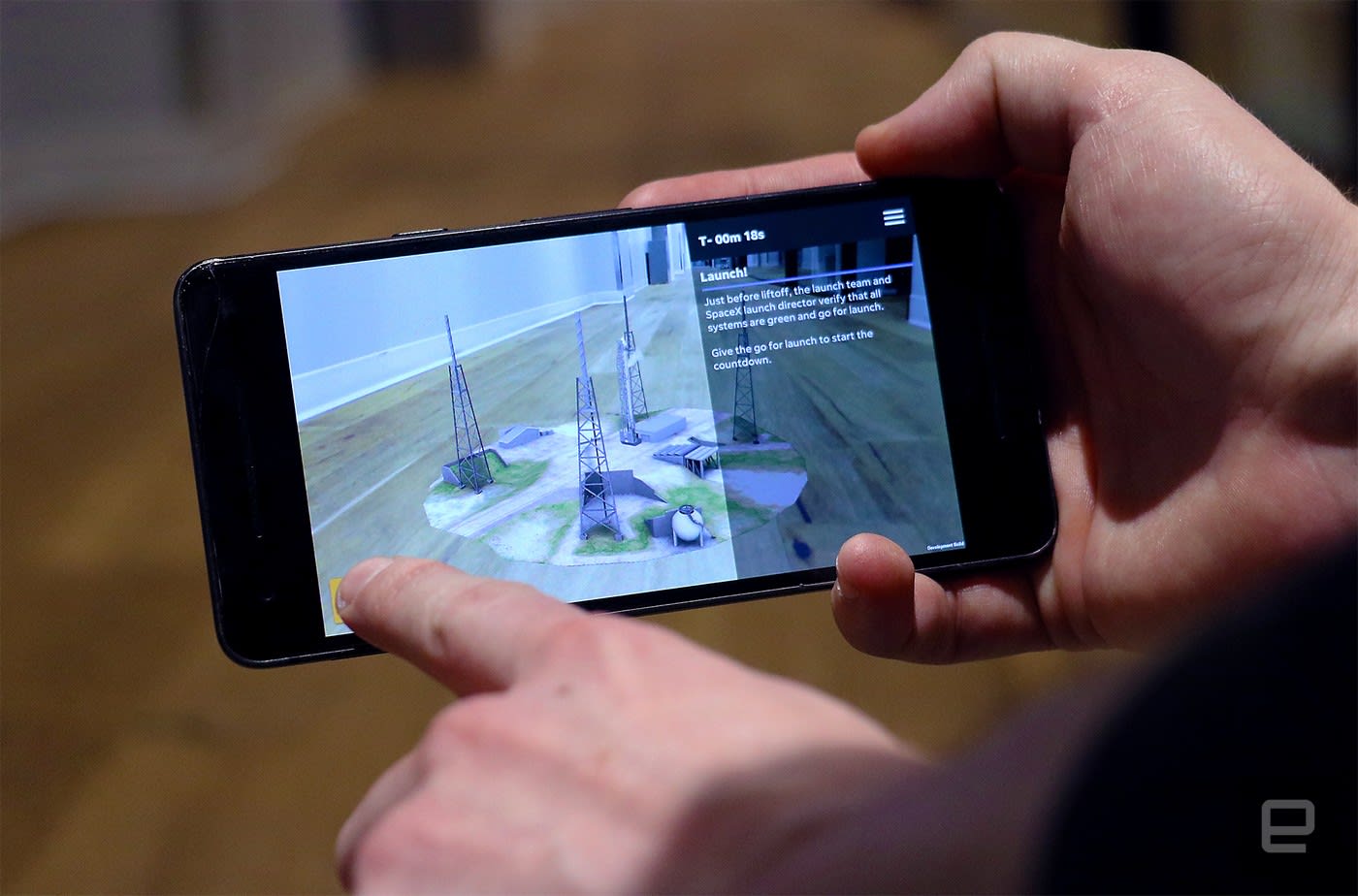 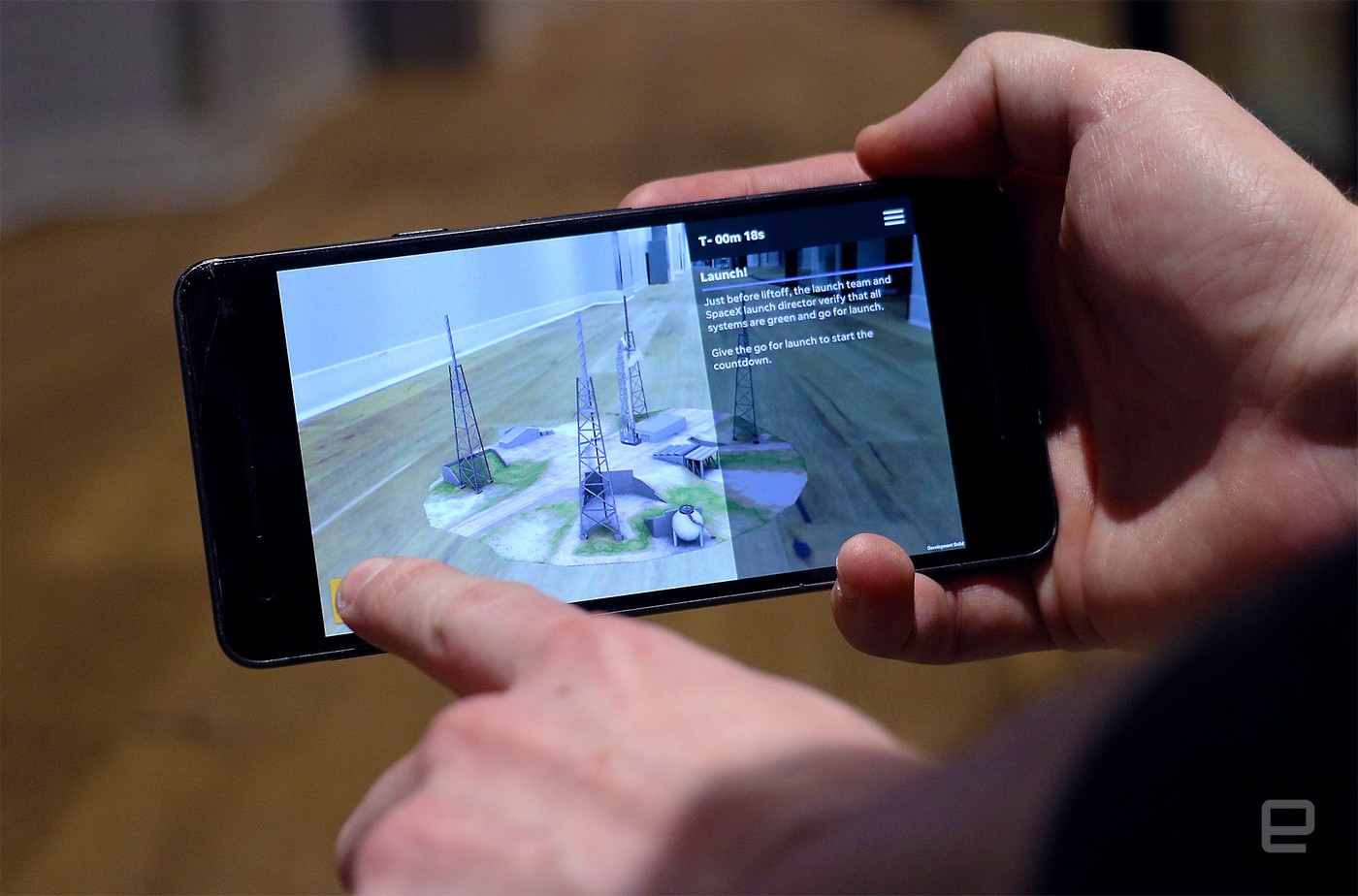 After a series of VR apps like The Wall and USS Eisenhower VR, USA Today Network is now exploring storytelling on another new (ish) platform: AR. 321 Launch is the network's first AR app, and it's designed to deliver what it says is the "industry's first, multi-layered interactive experience for space news and content." It's a collaboration between USA Today and one of the company's local news brands Florida Today, which makes sense since the Kennedy Space Center is in that state. The app releases today, and you can try it out if you're using an iPhone 6S or later with at least iOS 11, or a handset running Android 7.0 or newer. If you're a space buff or enthusiast, you'll probably enjoy it.

The app is straightforward. Open it and select "Launch Simulation" or "Live Mission." The former lets you build and launch a rocket from scratch, while the latter takes you to a faux launch pad with a live feed of a real launch (if one's happening). Since there wasn't an actual launch during my time with the app, it wasn't streaming anything. The home page helpfully shows a countdown to the next launch, which will take place on April 2nd. You can get an alert about the event closer to the day, too.

Until then, you can still play with the simulator, which is educational and fun. Using your phone's camera, you'll scan for a flat surface in your vicinity on which to place the virtual launchpad. The app taps ARCore and ARKit for Android and iOS to do this, and my Pixel 2 struggled to find a suitable patch on my cluttered work desk. 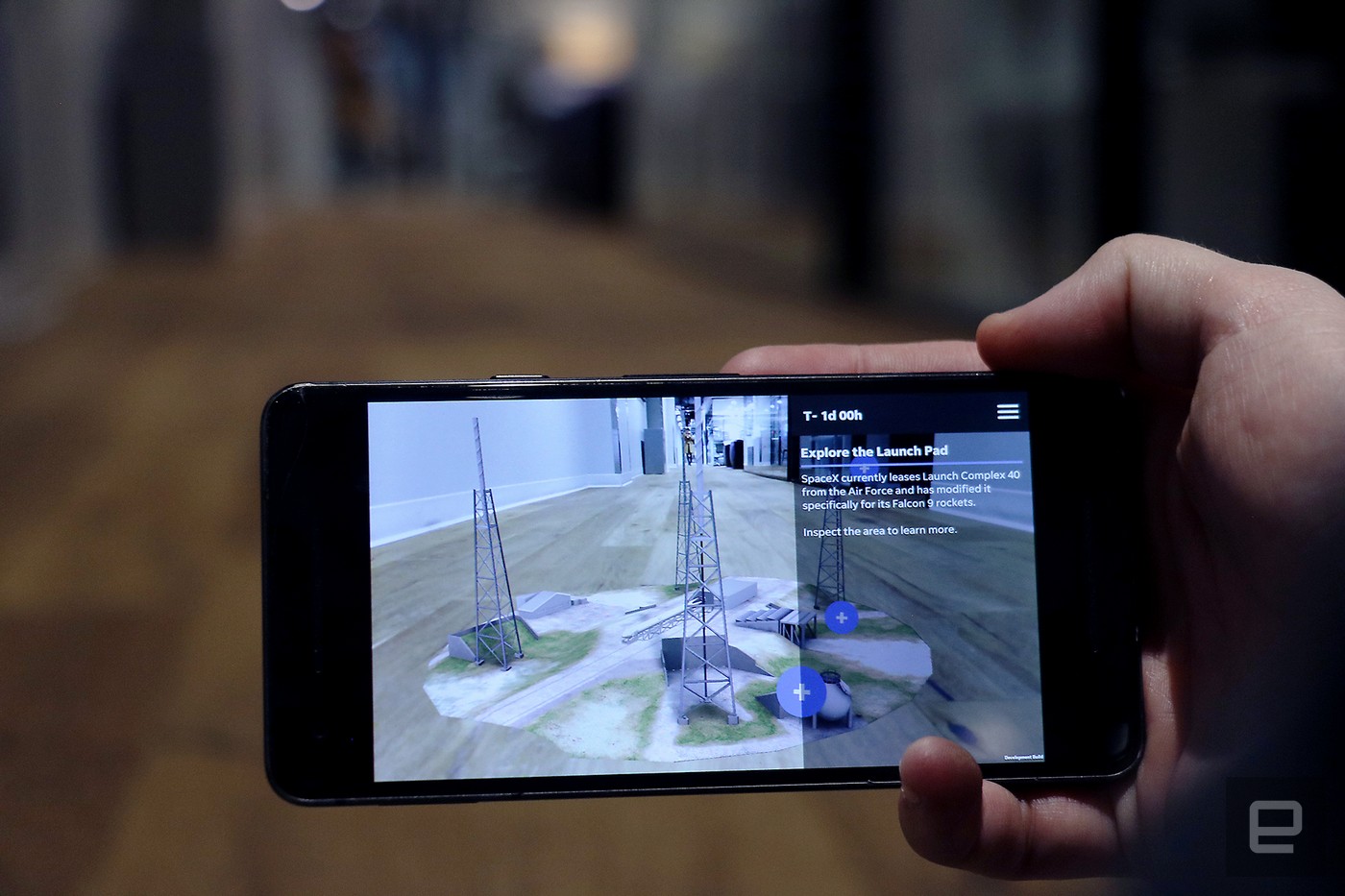 During my recent demo at USA Today's offices, though, we quickly found several surfaces to use, and the app marked them out with white boxes. I dragged a SpaceX assembly building to the lid of a MacBook in front of me, then followed instructions like "place the strongback" and "swipe to fill up the fuel gauge." At each stage, the app showed interesting nuggets of information, like how structures around a launch pad are filled with water to dampen the sound energy from rocket engines.

I won't spoil the experience for you -- it's more fun if you don't already know this information when putting your rocket together. By the time I finished the simulation, which took about 15 minutes, I was impressed by the crisp quality of the digital graphics, even when I moved up close to inspect the spacecraft. Make sure you have audio turned on, too. The launch countdown sequence was made all the more realistic thanks to the sound effects that were reminiscent of all my favorite space movies (or just Apollo 13). All told, the simulation was engaging and educational, although I was slightly distracted by how hot my phone got. 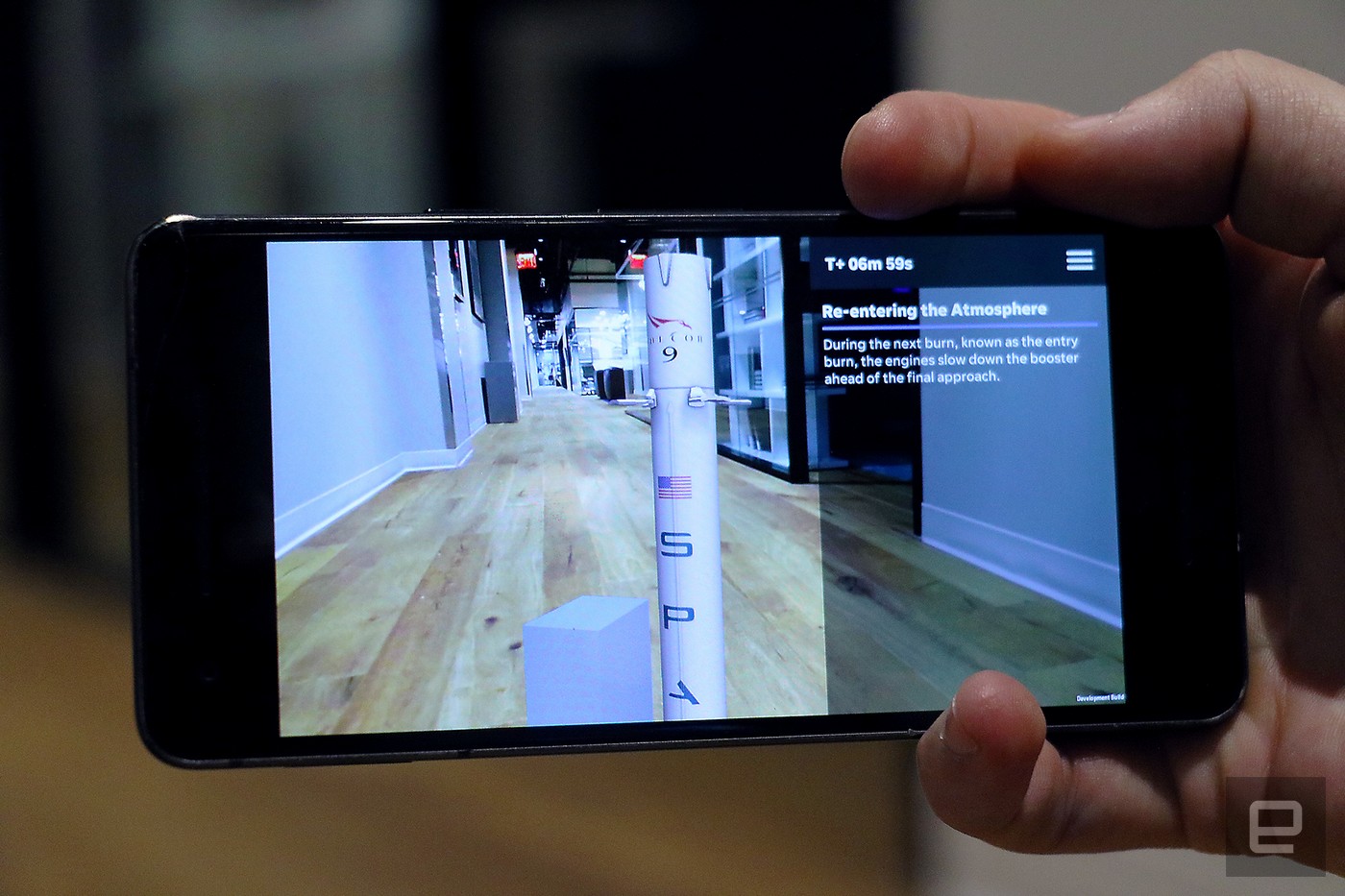 Come April 2nd, you'll be able to watch the launch of the SpaceX Falcon 9, with live video streaming from the app, alongside real-time commentary from Florida Today's space reporters. You can also use your phone's GPS to see where the Kennedy Space Center is relative to your location, as well as see the rocket's flight path to see if it crosses where you are.

USA Today Network has won awards for its previous VR apps, and continues to explore new means of storytelling. Ray Soto, director of emerging technologies at USA Today Network, told Engadget that his team plans to add more launches to 321 Launch, as well as create other AR apps in collaboration with the network's other brands.

Given Google just released ARCore 1.0 to let any developer publish apps which use that toolkit, 321 Launch is a relatively early example of a fun, educational way to use AR. We're sure to see loads more intriguing examples in the months to come, though, so get ready for your reality to get very augmented.

Update: This article was edited to correct a spelling error. USA Today Network's director of emerging technologies' last name is Soto, not Sotos.

In this article: app, apps, ar, arcore, arkit, AugmentedReality, floridatoday, gannett, gear, mobile, space, spacex, UsaToday
All products recommended by Engadget are selected by our editorial team, independent of our parent company. Some of our stories include affiliate links. If you buy something through one of these links, we may earn an affiliate commission.