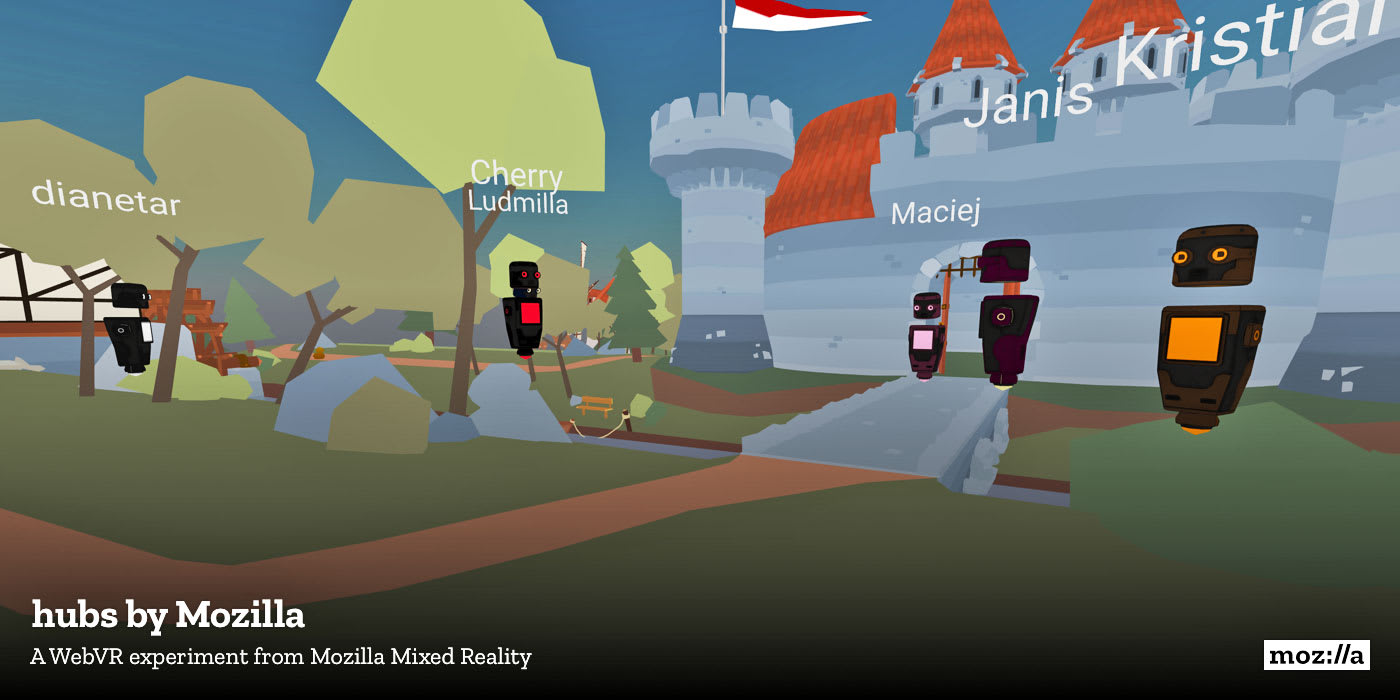 On a Manhattan rooftop earlier this week at the Tribeca Film Festival, Mozilla previewed its newest concept, a group VR hangout service called Hubs. Unlike the virtual-reality environments shown off by Facebook and others, you don't need to sign in to a platform or use a plugin -- just click a URL and you'll be taken straight to a digital space in full VR. And since Hubs is built on WebVR, Mozilla claims you'll be able to view it on any mixed reality headset starting today.

Platform agnosticism was only one part of the pitch Mozilla R&D chief Sean White gave for Hubs. Another is the ability for companies or teams to plug its tech into their projects, perhaps to add easy-to-connect VR rooms to remote co-working platforms -- but that's in the future. Mozilla has launched Hubs as an intentionally unfinished "experiment" for folks to tinker with and provide feedback. The company plans to refine it and may release it as a fully-fledged product depending on what users want to see, but for now, it's available for anyone to download.

At Mozilla's event, I had a chance to check out an early look at Hubs via a Google Daydream headset with a Pixel 2XL. After the rep clicked a link, I was transported to a sparse room that reminded me of a stripped-down version of Job Simulator. I was chilling in a castle-themed virtual space with four walls and a floor, as well as stairs to platforms I couldn't reach -- not graphically impressive or charming at all. Mozilla promised that more features are coming, including avatar and room customization, but until then, the core functionality to join other users at the click of a URL is there.

Or at least, that's what Mozilla assured me. Unfortunately, nobody hopped into my Hub to demonstrate the click-and-you're-in functionality, so I can't vouch for the tech or how it handles multiple users popping in through a browser link. It was lonely wandering around the room without anyone else, but I could imagine how slick it would be to text friends a URL and have them pop in, whether they're using mobile VR or a fancy headset at home. Hubs could make it easier to meet up with friends in virtual reality, but there's no reason folks couldn't use it professionally to interact with colleagues or clients.

Given how much privacy Mozilla has baked into various Firefox versions, it's no surprise they're doing the same with Hubs. Per its policy, the company is clear about what it does and doesn't keep. It receives data and voice chat from the room to send to other users, but doesn't store it in its servers; Mozilla only holds on to technical and usage information. But the company is also concerned about user safety, as it's considering establishing a "security bubble," which is just a radius around avatars to keep potential creeps at arm's length. Even VR isn't always safe.

Mozilla has been slowly integrating VR in Firefox for years, but it recently teased Firefox Reality, an upcoming browser that enables multi-headset, multiplatform virtual reality. Hubs is similarly designed around accessibility and works outside VR, too: If users don't have a headset handy, they can still click on the Hubs link to interact in 2D. According to Mozilla, the service works through browsers on mobile, tablet and desktop.

Hubs isn't the prettiest service, but if it manages to pull off easy VR group chat, it could be a steppingstone toward simple recreational and professional meetings in virtual reality.

Source: Mozilla Hubs
In this article: gear, internet, MixedReality, mozilla, Tribeca2018, VirtualReality, vr
All products recommended by Engadget are selected by our editorial team, independent of our parent company. Some of our stories include affiliate links. If you buy something through one of these links, we may earn an affiliate commission.