50+ tools for growing your business, now on sale 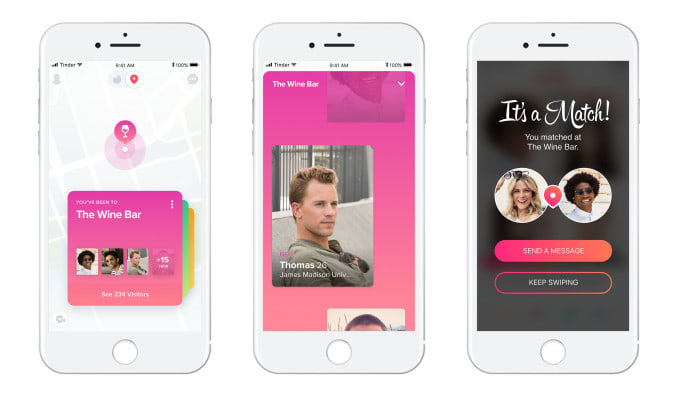 The science involved in making a match on Tinder is rudimentary at best: you can narrow your pool of potential baes by age and distance, and after that you're largely on your own, relying on carefully selected photographs and vague bios that reveal how your potential match "enjoys having fun", like every other human in the world. There's not a lot to work with before you get to the chatting stage. So Tinder is upping the ante with a new location-based feature, narrowing your prospects to those you cross paths with at your favourite bars, coffee shops and other hangouts.

Tinder Places leverages Mapbox and Foursquare's Pilgrim SDK to share places that Foursquare deems "social", so it won't include places like your home, office, bank or anywhere else considered too personal or irrelevant to matching -- it's essentially a beefed-up version of Happn. The info is displayed on a separate section of the app, and you can choose which places are shown. Importantly, it's an opt-in feature, so your location data is hidden unless you actively choose to show it.

Tinder claims that Places is designed to create more meaningful matches, and it's easy to see why. If you're a fan of heavy guitar music and you can see that a match spends a lot of time hanging out in your favourite rock bars, you're probably going to have something to talk about. As Samantha Stevens, director of location products at Tinder, tells Techcrunch: "The places that you go say a lot about who you are as an individual, what you value, your hobbies, your interests. So being able to match with someone on Tinder who shares those same things with you, we believe creates a more genuine match and a better conversation."

Of course, it doesn't take a genius to recognize that sharing your location data in this way could have some pretty significant safety ramifications, but Tinder has built in a number of measures that limit the potential for stalking. Visits to places aren't recorded in real-time, with the app waiting 30 minutes or more before showing it, plus it randomizes the time of your visit before associating it with another user, making it extremely difficult (but not impossible) to deduce someone else's routine. You'll get an alert when a new place is added, which you can hide from your profile if you want to, and after 28 days your association from a place deletes from the app. "As a female who designed this feature, I personally made sure that I would feel safe using it," says Stevens.

Personal safety is clearly a priority for Tinder -- in February it launched a Bumble-like "women talk first" feature, for example. Data security, on the other hand, is something the company has had issues with. Earlier this year an uncovered exploit revealed a way to gain access to any Tinder account using only a phone number, and more recently users were left adrift after the app failed to work with Facebook's privacy changes. The company holds a huge amount of data on its users -- the Places feature only adds to that trove, and deleting this location data means deleting your entire account.

Still, who's going to let that get in the way of true love? The feature, first announced back in February, is now formally underway in three cities: Sydney and Brisbane in Australia, and Santiago, Chile. Tinder plans to collect feedback from these trials before rolling it out worldwide, although there's no timeline in place for that yet. You've probably got enough time to become a regular at the coolest bar in town, though.

Via: Techcrunch
In this article: data, dating, foursquare, location, love, places, security, services, sex, social, Tinder
All products recommended by Engadget are selected by our editorial team, independent of our parent company. Some of our stories include affiliate links. If you buy something through one of these links, we may earn an affiliate commission.