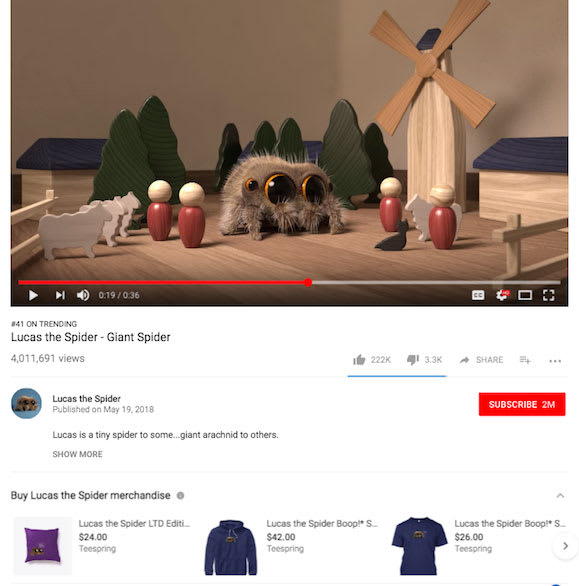 YouTube is having a busy day at VidCon 2018. Aside from launching Premieres, a feature that lets creators hype prerecorded videos with a public landing page, the company is also announcing new ways for them to make more money. For starters, channels with more than 100,000 subscribers will now have access to Memberships, which will allow viewers to pay a monthly fee of $4.99 to get exclusive access to badges, emoji, livestreams, members-only videos and shoutouts, among other perks. This is exactly what YouTube was already doing with Sponsorships, though that was available only to a select group of YouTubers. If you're a creator but don't meet the 100,000-subscriber threshold, YouTube says it hopes to bring Channel Memberships to more people in the coming months.

In addition to that, YouTube has teamed up with Teespring on a merchandise shopping tool that will let creators sell custom gear via a built-in hub on their channel. As pictured above, YouTubers can choose from over 20 merch items to offer to their audience, including tees, hoodies and accessories including pillows. Like with Premieres and Channel Memberships, YouTube's merchandise shop won't be available to everyone: It's just for US-based channels with more than 10,000 subscribers, though the company did say that it plans to bring it to more creators "soon," along with other merchandising partners.

These changes come as certain YouTubers continue to have monetization issues, particularly after all the changes the site has made to its advertising guidelines -- which sometimes result in inoffensive videos being taken down. It's gotten to the point where creators have made videos about the ongoing situation, with many of them expressing that it's hard to know when their content is going to be demonetized, even if whatever they've uploaded wasn't controversial or didn't violate ad rules. For those who make a living out of YouTube, you can see why this would create a pressure that's hard to deal with.

Still, YouTube says that the number of creators earning five and and six figures a year is up 35 and 45 percent, respectively. And it hopes that, by looking beyond ads and introducing things like Channel Memberships and merch sales, it can help eligible YouTubers make as much money as possible.

Source: YouTube Blog
In this article: av, business, channelmembership, channelmemberships, entertainment, gear, google, internet, membership, memberships, merch, merchandise, patreon, services, store, teespring, vidcon, vidcon2018, youtube, youtuber, youtubers
All products recommended by Engadget are selected by our editorial team, independent of our parent company. Some of our stories include affiliate links. If you buy something through one of these links, we may earn an affiliate commission.