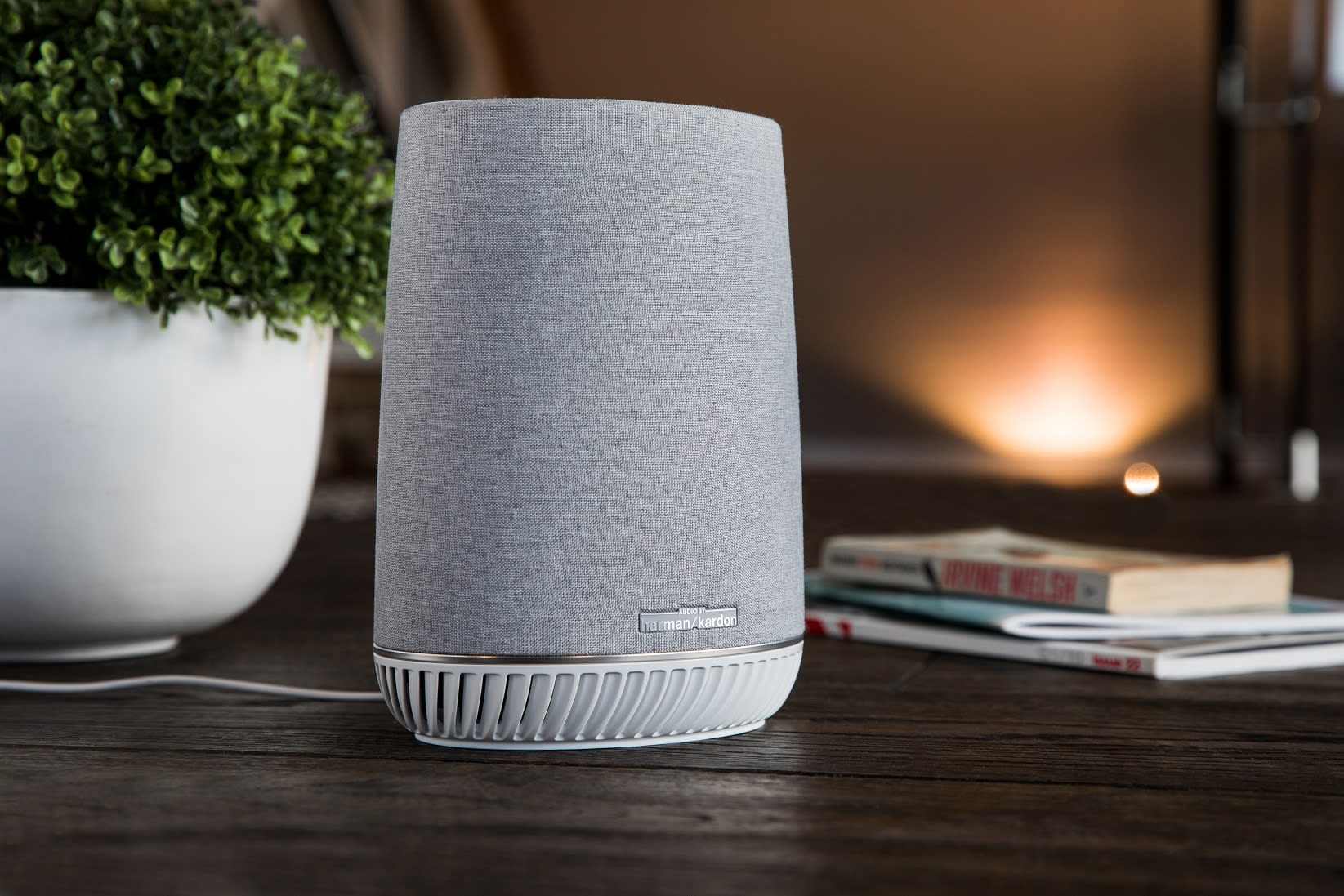 An unlikely partnership between router maker Netgear and audio company Harman Kardon has resulted in a smart speaker that does just a little bit more than its competitors. The Orbi Voice isn't just another Alexa speaker, it's got serious sound pedigree and it acts as a WiFi repeater too, spreading internet while it's pumping tunes.

The companies held a press event in New York to debut the speaker, which is part of Netgear's family of white, ovoid Orbi routers and 'satellite' signal extenders. The Orbi Voice keeps the line's aesthetics in tact with its white plastic frame wrapped in airport carpet-grey fabric. On top are colorful touch buttons to turn off the sound and (for the privacy conscious) its four microphones, along with a capacitive bar to adjust volume, though you can also adjust the latter with the device's paired smartphone app. Like other Orbi devices, the Voice has a ring LED at the top, which it uses to display WiFi and Alexa status.

Similar to other smart speakers, Netgear's device must stay plugged into a wall outlet. This means you'll likely keep it in the corner of a room or the backyard to serve as a positional hub for sound and WiFi. Netgear envisions its Orbi line as a solution to simplify and enhance "mesh WiFi" networks in the home; Accordingly, the Voice could replace several existing devices. If you were going to install a signal repeater to extend WiFi, why not bundle that with other things you'll use around the house, like a speaker and voice assistant?

The Voice's audio capabilities aren't quite on the level of bigger options like Apple's Homepod or Harman Kardon's own Citation 500 speaker, but it produced respectable sound with its 3.5" subwoofer. The demo placed the Voice in the middle of a mock living room and started blasting Michael Jackson's "Billie Jean" from Spotify, one of several services supported by the device through Alexa. When I got to fiddle with the device myself, its maximum volume carried across the floor, which tells me it could project throughout a decently-sized backyard. Those with existing subscriptions to popular music services will be able to ask Alexa on their Voice to play from Spotify, Pandora, Deezer, Amazon Music, Audible and others out of the box.

For now, the Voice only works with the Orbi line of products, so you can't hook it up to your existing system if you own a different router. Whether or not that hinders the device's success, the combination of repeater and speaker seems like clever consolidation of domestic gadgets that seems obvious in hindsight. Netgear is trumpeting this as the first in a new category of products that combine networking, audio capability and voice assistant support, but it hasn't confirmed whether others are in the works. The Voice will retail for $300 alone or in a bundle with an RBK50 Orbi router for $430 -- and both will be available in September.

In this article: alexa, AmazonAlexa, gadgetry, gadgets, gear, HarmanKardon, Netgear, orbi, repeater, router, SignalBooster, smartspeaker, speakers
All products recommended by Engadget are selected by our editorial team, independent of our parent company. Some of our stories include affiliate links. If you buy something through one of these links, we may earn an affiliate commission.