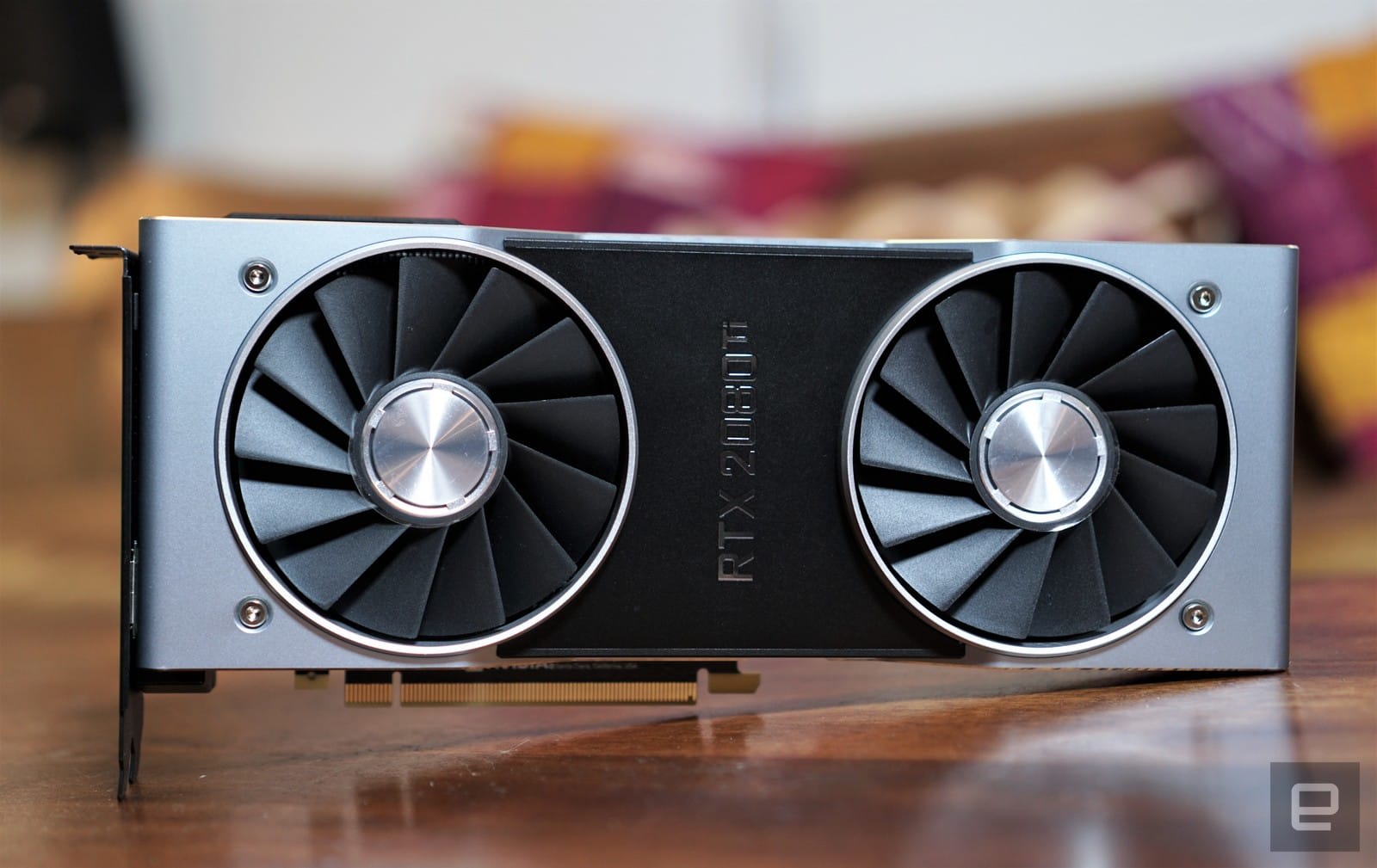 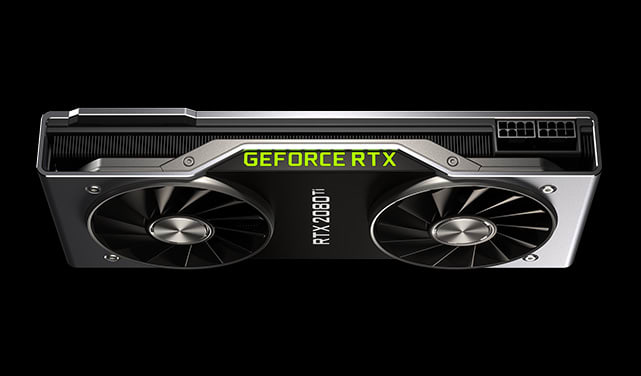 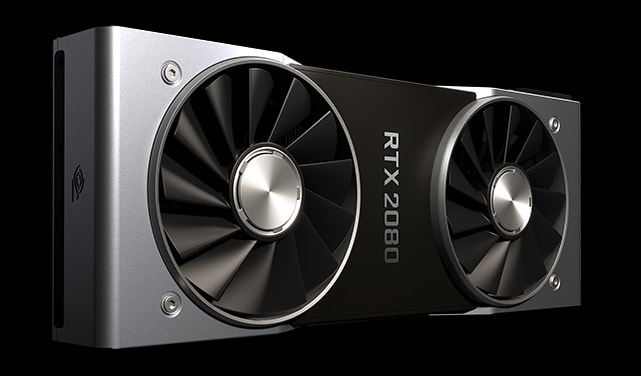 NVIDIA's new RTX graphics cards are for the gamer that wants it all. I'm talking about 4K gaming beyond 60 frames per second, with the graphics settings dialed to the max. Both the RTX 2080 and RTX 2080 Ti are a significant leap beyond NVIDIA's last GPU generation, but they're more than just the gold standard of 4K gaming. They also bring the possibility of real time ray tracing -- a light rendering technology that used to be reserved for big budget CG movies -- to consumers for the first time. And that has the potential to change the gaming landscape forever. The RTX 2080 Ti is the fastest consumer video card today by far, but you’ll have to pay dearly for the privilege of owning one. And while we’re intrigued by NVIDIA’s ray tracing and AI rendering technology, it’s too early to tell how useful they’ll be.

How would you rate the RTX 2080 Ti?
We want to hear what you think. Post a quick review now to join the conversation!
Write a review

NVIDIA’s RTX 2080 is a huge leap over the GTX 1080 in terms of raw performance. And, while we’re intrigued by NVIDIA’s ray tracing and AI rendering technology, it’s too early to tell how useful they’ll be.

How would you rate the RTX 2080?
We want to hear what you think. Post a quick review now to join the conversation!
Write a review

Potential is the key word here, though. While we were able to run both video cards through the usual benchmarks and games, we only got a few glimpses at how they'll handle ray tracing and other promising new technologies. But first, the basics: Both the RTX 2080 and 2080 Ti Founders Edition cards feature handsome vapor chamber coolers with dual fans. That's one fan more than the GTX 1080 and Ti Founders cards, but it's also in line with with many third-party card designs.

There's not much to say about the GPUs otherwise, though. Their designs aren't nearly as flashy as the previous generation -- there's just a polished metal shroud that completely covers the cards. While it still gives off a premium look and feel, it just feels a bit simplistic. That's not a huge deal, since they'll be be locked away in your PC case most of the time. But really, what matters is what's inside. And both cards feature some astounding specs.

The RTX 2080 Ti sports the new Turing TU102 GPU with 4,352 CUDA cores, which is what NVIDIA calls its parallel processing architecture. And it includes some new capabilities never seen before in a GeForce card, including 68 dedicated RT or ray tracing cores, and 544 Tensor Cores for handling AI. The RTX 2080, meanwhile, has 2,944 CUDA cores, 46 RT cores, and 368 Tensor cores. In comparison, NVIDIA's last flagship GPU, the GTX 1080 Ti, had 3,584 CUDA cores and... that's it. Even though that number is higher than the 2080, the new card's improved architecture gives it a significant speed boost.

For gamers, all of those numbers really means one thing: the 4K gaming experience they've been dreaming of. While NVIDIA's previous cards gave us a taste of 4K, and in some cases the 1080 Ti could even approach 60 FPS, for the most part you had to settle for speeds between 30 and 50 FPS. That's still very playable, but it was a step down from the silky smooth performance PC gamers are used to when frame rates regularly go well beyond 60 FPS.

Previously, if you wanted that sort of speed in 4K, you'd have to shell out for two 1080 Tis. So sure, if you're looking for raw speed, these new cards have you covered. But NVIDIA also needs to do more to convince gamers to upgrade, especially since the leap to 4K isn't a very noticeable leap beyond 1,440p gaming. That's a major reason why NVIDIA has spent so much time hyping up ray tracing this year. It's a technology that lets developers paint objects and environments with beams of light from a source, similar to the way light works in the real world. Until now, developers have mainly relied on rasterization, the traditional method of rendering 3D scenes with polygons.

Ray tracing is a big reason why Hollywood films have an extra sheen of quality that games have struggled to attain. But movie studios rely on render farms and loads of computing power to get their work done over a long period of time. NVIDIA is attempting something even more difficult: Ray tracing in real time. It's not alone, though. Microsoft also announced support for ray tracing in Direct X 12, but that won't arrive until the October Windows 10 update. AMD will also support the technology in its ProRender engine, though it hasn't announced any hardware yet.

NVIDIA is taking a hybridized approach to real time ray tracing, where it'll work alongside traditional rasterization. The RTX GPUs can use the technology for producing things like shadows and glossy reflections. NVIDIA is also using all of the power of the new GPUs in more efficient ways. New shading techniques can render portions of a frame at lower resolutions, similar to how VR headsets downgrade content around your peripheral vision. 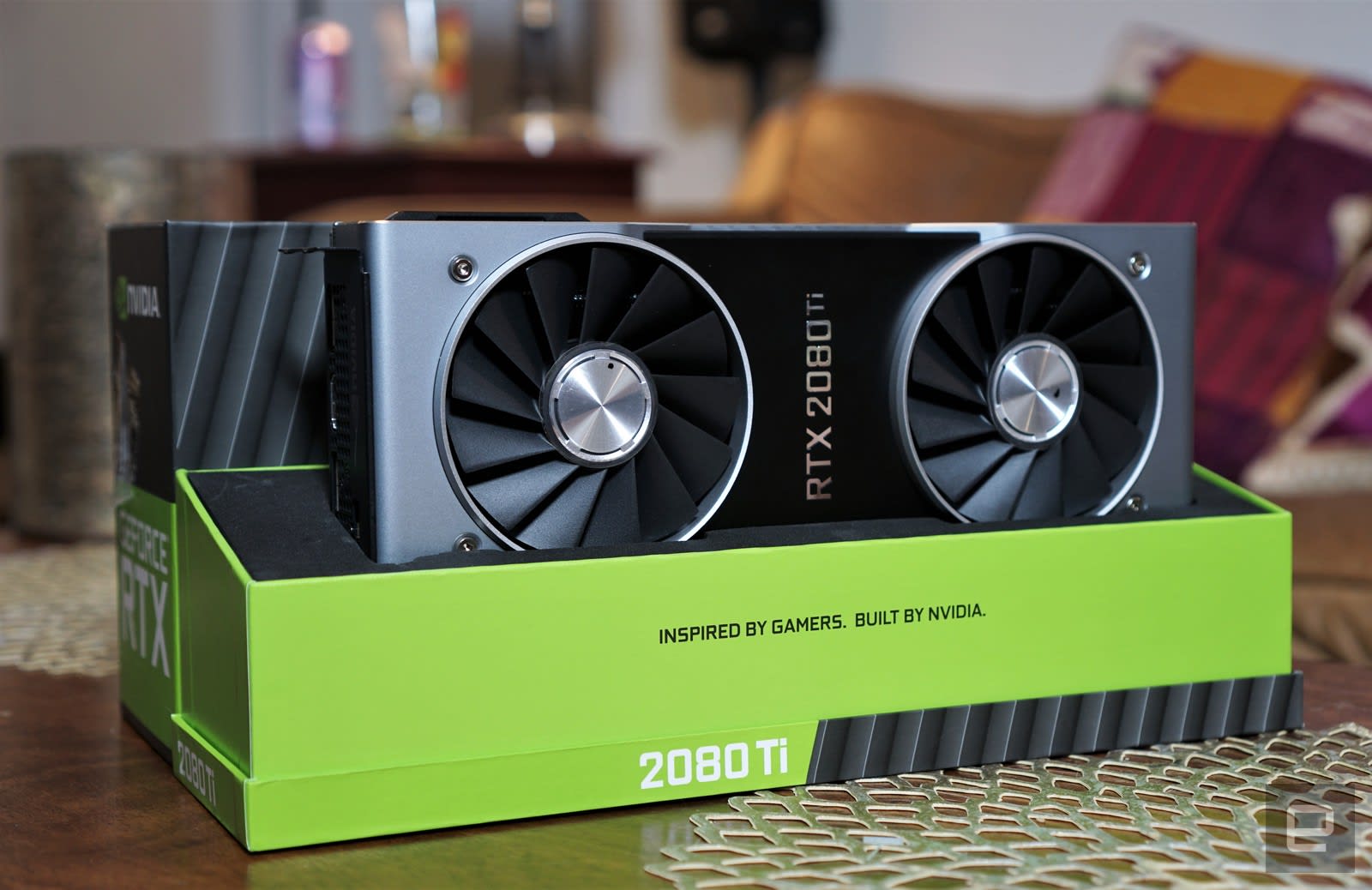 In many cases, like the side of a road in racing games, you likely won't notice if parts of an image aren't being rendered fully. But you will notice the higher frame rates that result. In Wolfenstein II: The New Colossus, NVIDIA claims this sort of rendering will lead to around 15-20 percent speed improvements.

The RTX GPUs are also breaking new ground with DLSS, or deep learning super sampling, an anti-aliasing technique that relies on those Tensor AI cores. Basically, NVIDIA runs game imagery through a supercomputer, which creates an algorithm specific to that title to help the Tensor cores smooth out rough edges. Ideally, that means you can get the benefits of anti-aliasing without a huge performance hit.

The downside with all of these new technologies is that developers will need time to implement them. So far, NVIDIA has a bunch of titles like Shadow of the Tomb Raider and Final Fantasy XV on board, but don't expect many older titles to get updated immediately.

For the purposes of this review, we're mainly looking at how the RTX 2080 and 2080 Ti perform with traditional metrics. But I'd wager that's more than enough to get gamers excited. While playing Final Fantasy XV in 4K with high graphics settings, the 2080 Ti comfortably sat between 65 and 75 FPS, while the 2080 came in at 49 to 54 FPS. The GTX 1080, meanwhile, struggled to hit 40 FPS and even occasionally dipped below 30. Even though the PlayStation 4 Pro and Xbox One X also tout 4K gaming, they're mostly making do with 30 FPS (and even if they reach 4K/60 FPS, it would be at a huge cost to graphics quality).

All games tested in 4K/HDR with the highest graphics quality settings on a rig powered by an Intel Core i7-8700K and 16GB of RAM on an ASUS ROG Strix Z370-E motherboard.

The gap was even larger with the Luxmark Luxball HDR benchmark, which tests the GPU's OpenCL performance for parallel processing work like 3D and video rendering. The 1080 scored a mere 12,153, while the 2080 was nearly three times as fast with a 27,418 score and the 2080 Ti reached an insane 40,331. If you're a creative professional, the astounding compute performance of these GPUs might even be more tempting than the graphics upgrade.

While games don't yet support NVIDIA's RTX Ray Tracing, I was able to run the Star Wars "Reflections" demo that the company has been using since it announced the technology. It's mainly a way to prove that the company's lighting claims aren't just made up, and it looks impressive. On the 2080 in 1,440p, it ran between 40 to 45 FPS, and on the 2080 Ti it was between 50 and 55FPS. In 4K on the 2080 Ti, it still clocked an impressive 43 FPS.

To show off DLSS, Square Enix also updated their Final Fantasy XV benchmark, which scored 6,000 in 4K with high settings on the 2080 Ti. With standard temporal anti-aliasing, it scored 4,249. That's a big performance gap, but I'm not entirely sure how realistic it is. An earlier version of the FFXV demo also scored slightly above 6,000 in 4K with TAA on the 2080 Ti. We'll have to get a close look at other titles supporting DLSS to really see how truly effective it is.

After hours of gaming, both Founders Edition cards warmed up to around 81C under load, while the GTX 1080 sometimes creeped beyond 85C. I noticed that my desktop was exhausting more hot air than when I was running the GTX 1080, which means the new GPUs could potentially warm up small rooms. That improved thermal performance also means the RTX GPUs should be somewhat overclockable as well. NVIDIA is also debuting a new tool called Scanner, which will be available to manufacturers for their overclocking apps, that automatically determines how far your card can go. Both RTX cards feature three 8K capable DisplayPort connections, an HDMI 2.0 port — which is useful if you're hooking it up to a TV and a VirtualLink USB-C port that'll power VR headsets.

While many titles still don't benefit from NVIDIA's ray tracing tech, the RTX GPUs are a huge leap forward for gamers, especially if you've invested in new high refresh rate G-SYNC monitors. I tested everything on the Acer Predator X27, a powerful new $2,000 NVIDIA-approved 4K HDR monitor. It's kind of a waste to weigh these GPUs down with old screens, so be prepared to save up for a monitor upgrade. 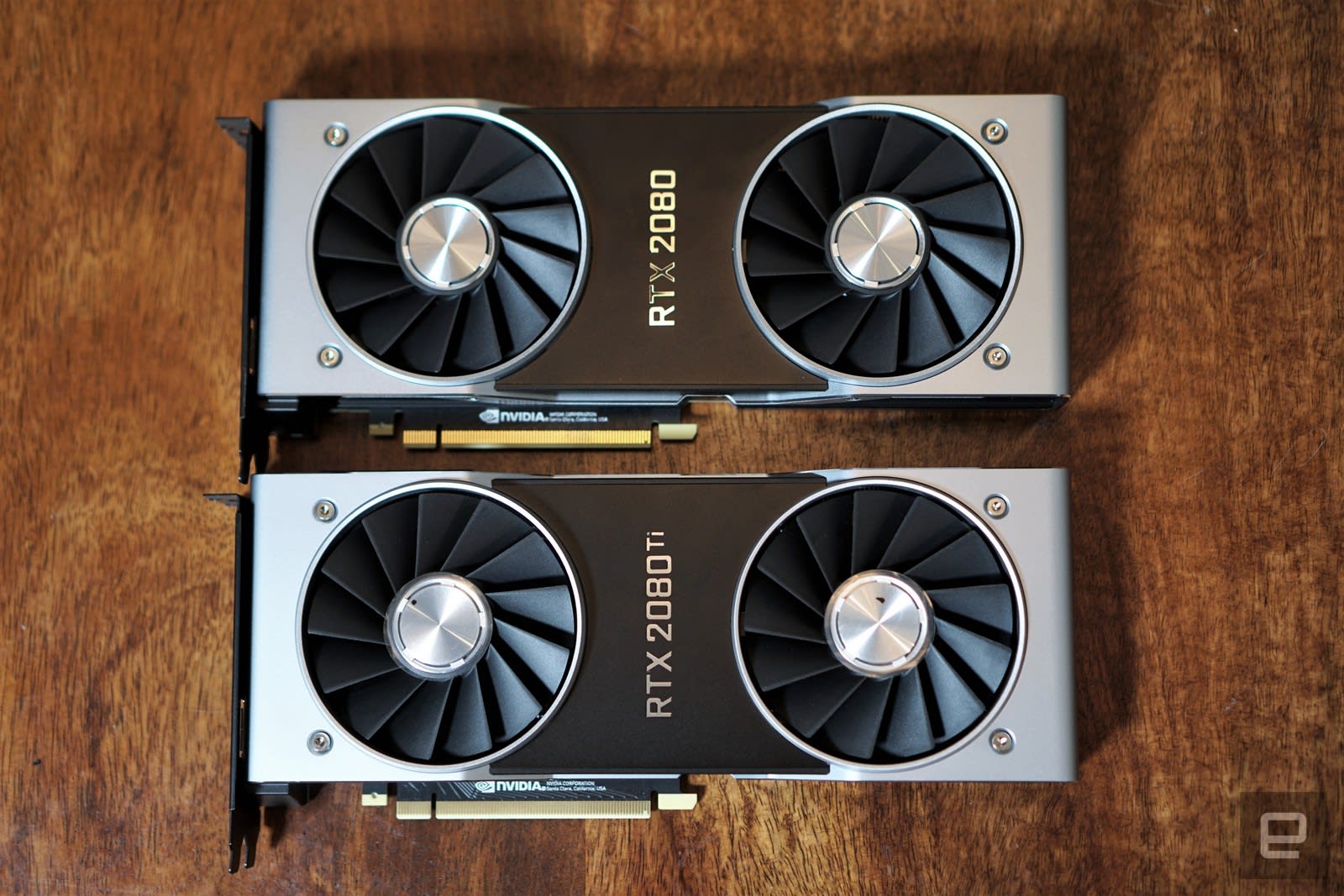 Third-party 2080 Ti and 2080 cards will start at $999 and $699. The Founder Edition RTX 2080 Ti and 2080, which we reviewed, are available for $1,199 and $799. For that slight premium, you get NVIDIA's excellent vapor chamber cooler and overclocked cards out of the box. And if you're aiming to save a bit of cash, but want the newest architecture, there's also the RTX 2070 for $499. Much like the GTX 1070, that'll likely be the best balance of price and performance for many gamers, especially once you start overclocking.

Barring another mad cryptocurrency rush, the cards will eventually fall in price over time. But really, there's no rush to upgrade. In fact, they should drive down the cost of NVIDIA's 10-series GPUs even more, making them a much better deal if you're not worried about true 4K gaming yet. AMD also doesn't have any cards comparable to the RTX line yet, though you might find some good deals among the recent Vega and RX GPUs.

It's too early to tell if NVIDIA's RTX 2080 Ti and 2080 will really change world of gaming and make Ray Tracing ubiquitous. But they're still impressive as upgrades over the previous generation, especially if you've been salivating at the thought of solid 4K 60 FPS performance. At the very least, it's nice to see NVIDIA exploring other upgrade avenues outside of raw horsepower.

In this article: gadgetry, gadgets, gaming, gear, GPUs, nvidia, personal computing, personalcomputing, review, RTX2080, RTX2080Ti, uk-reviews, video, videocards
All products recommended by Engadget are selected by our editorial team, independent of our parent company. Some of our stories include affiliate links. If you buy something through one of these links, we may earn an affiliate commission.