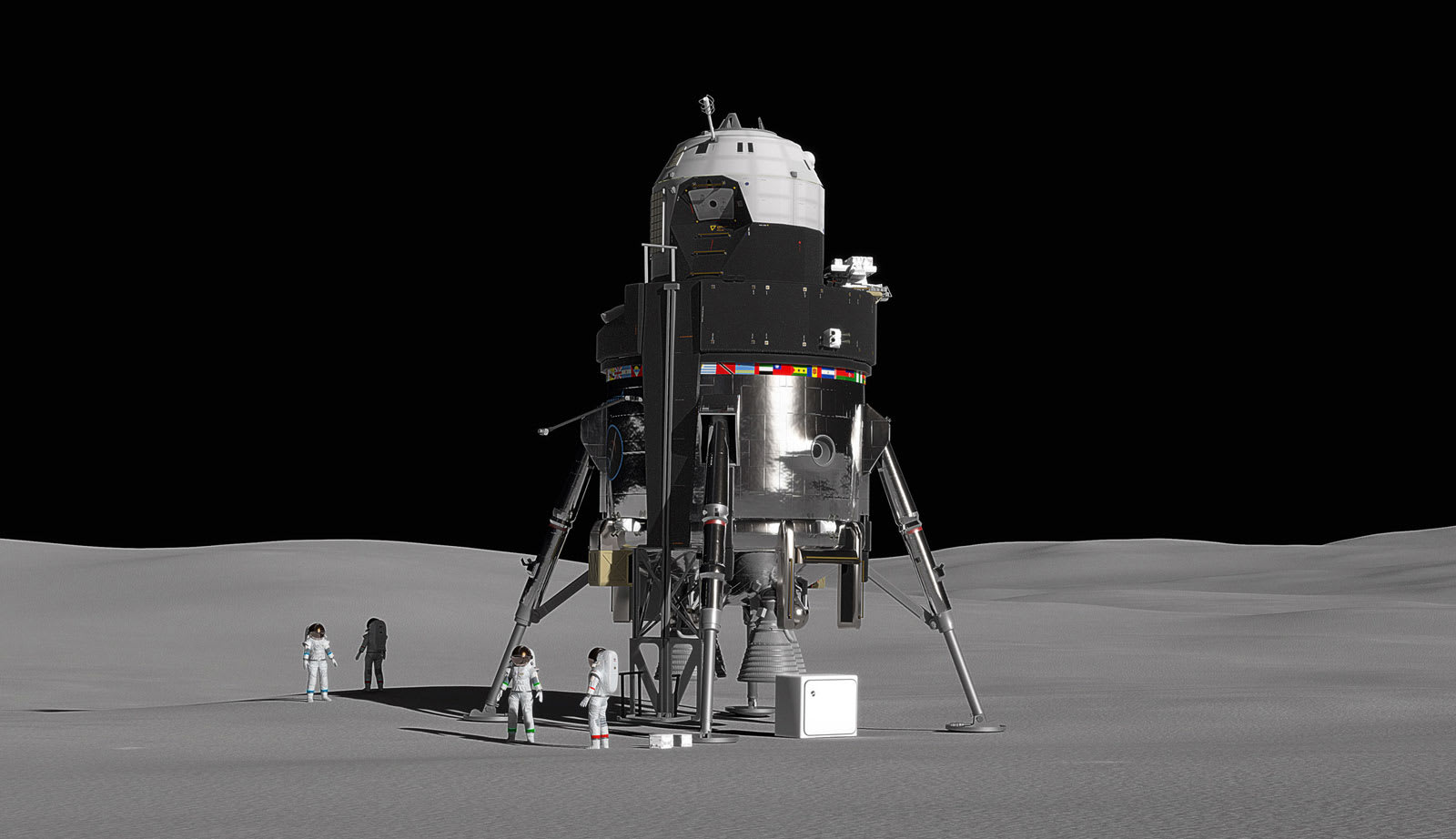 Lockheed Martin has unveiled the designs for a reusable lander built to ferry four astronauts and 1.1 tons of cargo between lunar orbit and the surface of the moon. Leveraging tech from the aerospace giant's Orion spacecraft for deep-space missions, the 14-meter, single-stage vessel can camp for up to 14 days on the moon. Upon touchdown, the crew will use the craft's lift elevator platform to get from the cabin to the surface, before blasting back to their home base aboard the Lunar Orbital Platform-Gateway -- a small space station that NASA plans to start constructing in 2022.

With enough juice to last the full two weeks, refuelling would take place between missions, though the lander can also be powered up on the surface. The preliminary concept relies on four modified RL10 engines, but other engines could also be utilized.

Lockheed's vehicle would be be twice as tall as the Lunar Module used during the Apollo missions to the Moon nearly half a century ago, reports Ars Technica, which carried two astronauts for brief stints of just a few days. The company says it will also serve as a precursor for its Mars lander -- also built to carry four people -- which is integral to its Mars Base Camp orbiting mission.

Last December, Donald Trump signed off on a space policy directive that calls for NASA, along with its private partners, to send astronauts to the Moon and, "eventually," Mars. And Lockheed is one of the private sector companies vying to be part of the exploration program. The company claims its lunar lander will be ready by the late-2020s, according to Space.com.

"The Gateway is key to full, frequent and fast reusability of this lander," said Tim Cichan, space exploration architect at Lockheed Martin Space, who presented the lander concept at the International Astronautical Congress in Bremen, Germany. "Because this lander doesn't have to endure the punishment of re-entering Earth's atmosphere, it can be re-flown many times over without needing significant and costly refurbishment. That's a major advantage of the Gateway and of a modular, flexible, reusable approach to deep space exploration."

Source: Lockheed Martin
Coverage: Space.com, Ars Technica
In this article: LockheedMartin, moon, nasa, space, SpaceExploration, tomorrow
All products recommended by Engadget are selected by our editorial team, independent of our parent company. Some of our stories include affiliate links. If you buy something through one of these links, we may earn an affiliate commission.