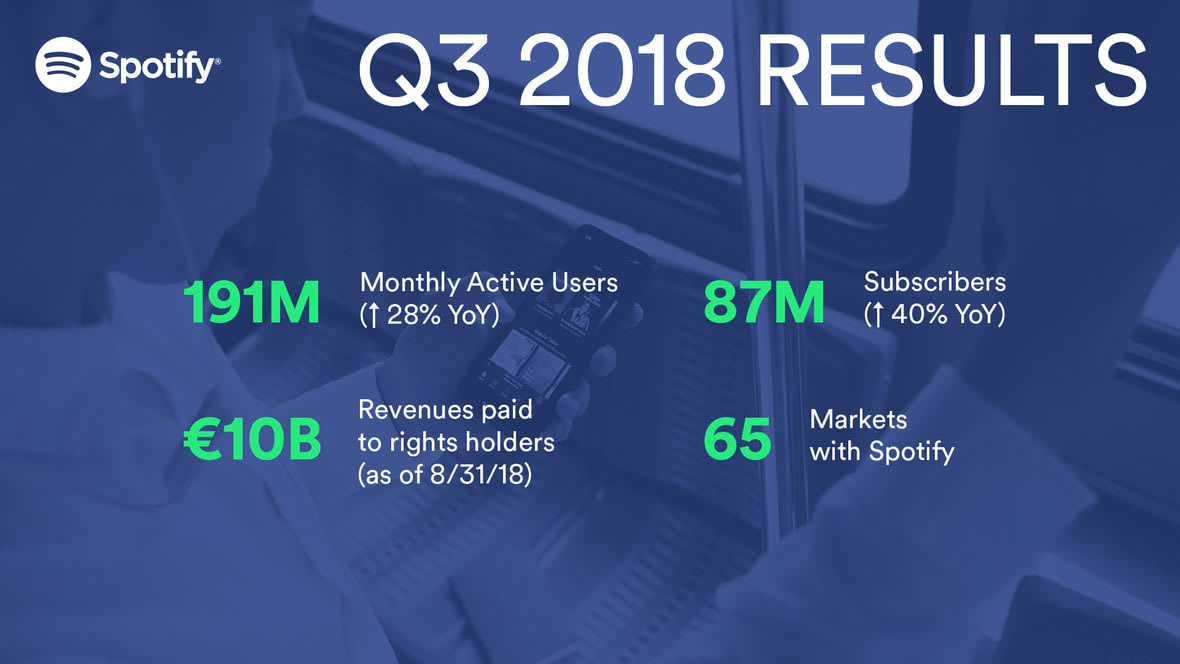 If anyone was expecting to see Spotify's growth tail off, then the company's latest earnings report is chock full of disappointment. The streaming service has managed to increase the number of paying subscribers to 87 million, up from 83 million three months ago. More broadly, the platform has seen its total user numbers rise to 191 million, up from 101 million in the summer. The increased numbers haven't led to an actual profit, but losses are way, way down, from €90 million ($102 million) in Q2, to just €6 million ($6.8 million) now.

Spotify is feeling pretty bullish about its future, pointing out that it is seeing the number of people quitting the platform going down. It's also expanding its footprint with deals like the one it now has with Samsung that sees Spotify becoming the default music app. Plus, in the UK, an agreement with pay-TV outfit Sky will see users be able to pay for the streaming service as part of their TV bill. Not to mention that a $4.99 a month bundle deal, in partnership with Hulu and Showtime, is going down well with students.

This is the first time that Spotify has opened up about its new system for allowing indie artists and labels to submit tracks for playlisting. According to the company, more than 67,000 artists and labels have uploaded content, and more than 10,000 of them were selected for inclusion on Spotify playlists. It will also expect to throw money at podcasters to grow its brand in the spoken-word space following a deal with Joe Budden.

For the fourth quarter, Spotify is hoping to see total user figures reach as high as 206 million, with paid subscribers up to 96 million. Profits, however, may still be scarce -- and moreso now that the company is giving away Google Home Mini speakers to all of its family plan customers. But those blips aside, it looks as if Spotify isn't going to be cowed by the threat of other, wealthier streaming services on the scene.

Source: Spotify
In this article: 2018Q3, av, Business, entertainment, gear, internet, Music, Q3, Spotify, SpotifyQ3, Streaming
All products recommended by Engadget are selected by our editorial team, independent of our parent company. Some of our stories include affiliate links. If you buy something through one of these links, we may earn an affiliate commission.