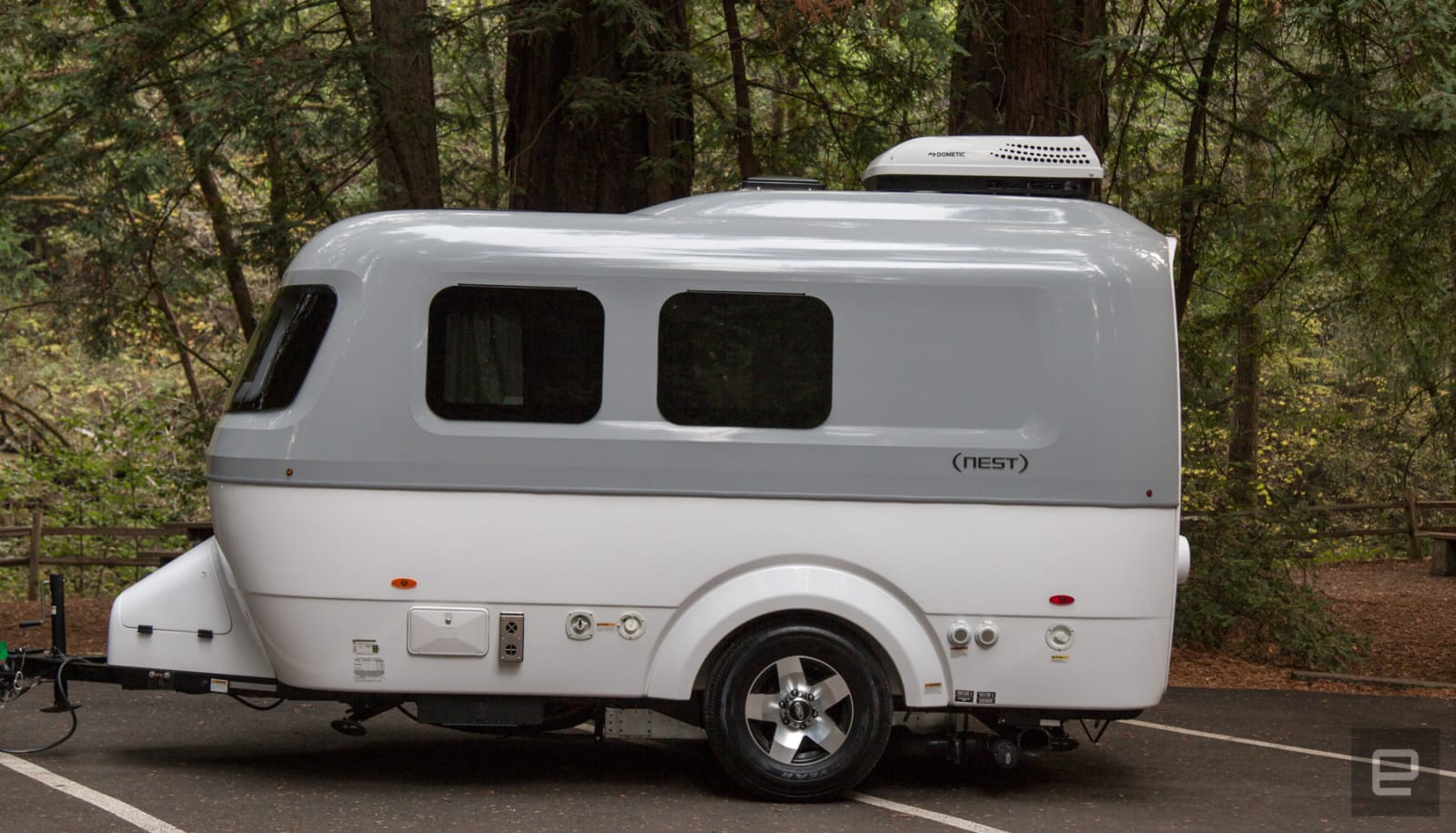 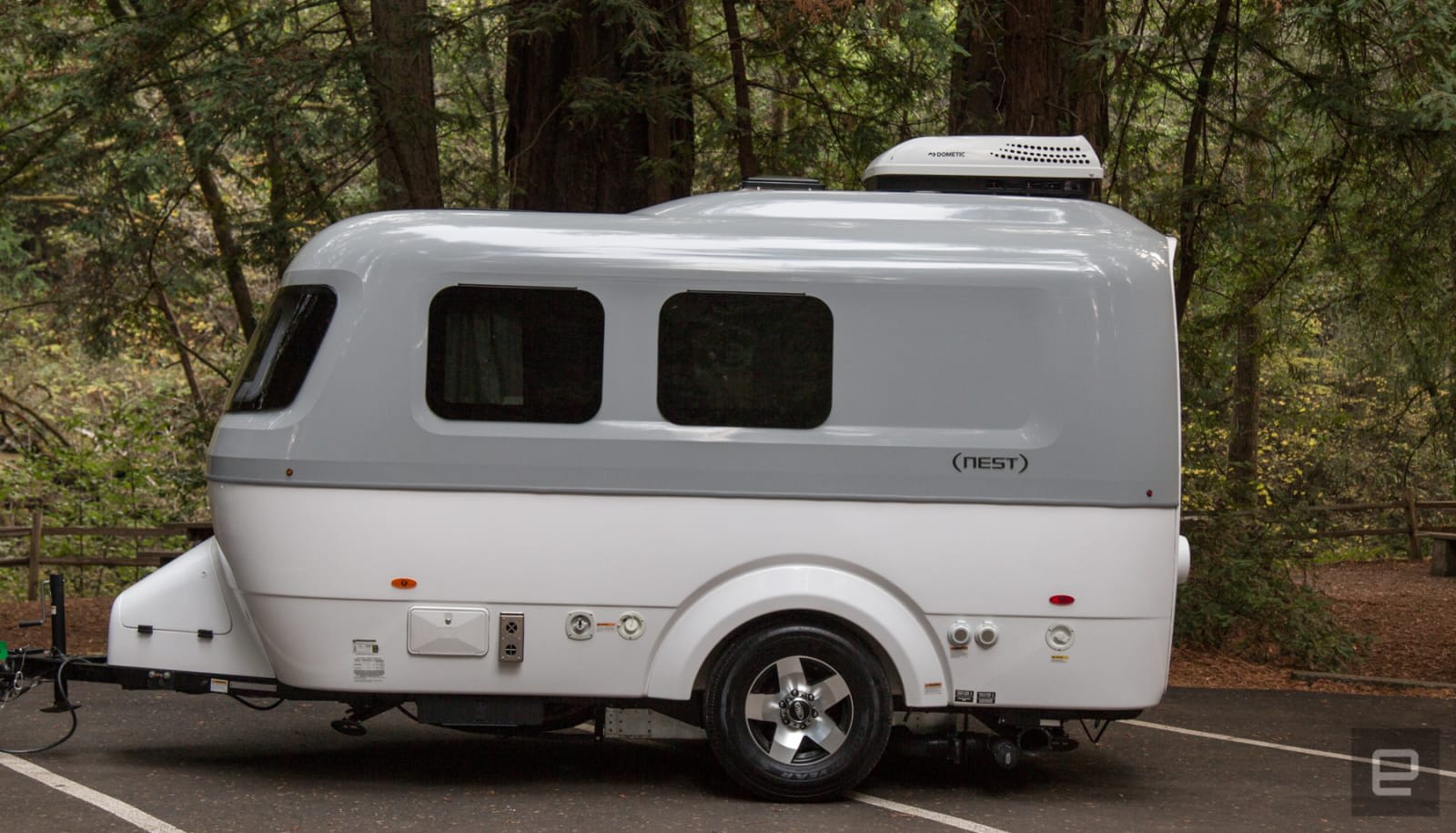 Even if you've never thought about splurging on a travel trailer, you've probably lusted after an Airstream. The aluminum homes away from home glisten as they are towed down highways and backroads, and you can't help yourself. You want one. But after decades of shimmering tubes, Airstream is changing things up with its latest offering, the fiberglass encased Nest. Starting at $45,900, the 16-foot, seven-inch rolling home breaks the mold and goes for a minimalist design. The two-tone gray and white Nest might not look like the rest of the Airstream lineup, but inside, it's the same comfy, well-appointed space you've come to expect from the company that fused retro-chic with high-end trailers.

During my time with the Nest, I took two short trips. One with my wife and the second, alone. Although, when you're staying at an RV park, you're not really alone. Instead, you're nestled amongst a line of trailers, each hooked up to a power supply and water source. Like puppies nursing from their mom, we're all warm and happily suckling on a steady supply of life-enhancing civilization.

During those trips, the Nest's small footprint (in relation to the rest of the trailers and RVs at the campgrounds) seemed like it would be an issue. The more room the better, right? Turns out, my concerns about needing more space were unfounded. Airstream crammed a lot of features in an area the size of a medium-sized bedroom.

The Nest has a refrigerator with a freezer, a microwave, a propane range, a sink, a bathroom with a toilet and shower, a closet, and quite a lot of storage space. The walkway is large enough for two people to scootch by each other and, if needed, work on the counters opposite each other.

Airstream says it's built for two. Of course, that's predicated on the fact that you'll be spending time outside and it's only going to be for a few days. A three-day weekend with two people, no problem. A weeklong trek with a couple? You're probably going to need some counseling when you get home.

Typically that therapy session would be because your trailer's table (that turns into a bed) is an uncomfortable patchwork of cushions. No one is happy after a restless night. After a quick transformation from breakfast nook to bedding, I was expecting to wake up after the first night with an aching back. I was pleasantly surprised that I was well-rested and my spine felt better than it did at a recent hotel. Oh, and at 6-foot-3-inches tall, I actually fit without curling up like a shrimp.

The restful night of sleep was helped by the Nest's built-in furnace. After an initial problem where I forgot to turn on the breaker for the power station I was plugged into was rectified, we got the trailer up to a cozy 78 degrees then quickly reduced the heat to a more livable 66. We live in San Francisco, we're not used to being warm.

A few days later I blasted the roof-mounted air conditioner. Like the furnace, it worked quickly and without any issue. Both are controlled by a single unit on the wall. It's just like the central heating in your home. Except you're not at home.

The stovetop operates like a propane BBQ. It's easy to use and while it only has two settings (high and low) it was enough to cook breakfast without any hassle. When you're done playing chef, a hinged lid covers up the area giving you more counter space. The sink also has a cover (that doubles as a cutting board) so your cup runneth over with areas to put things down.

The entire trailer is an exercise in cramming as much stuff as possible into a small area while still conveying a sense of order and space. Airstream has decades of experience pulling this off, and while the exterior of the Nest looks markedly different from its cousins, the inside is pure Airstream. 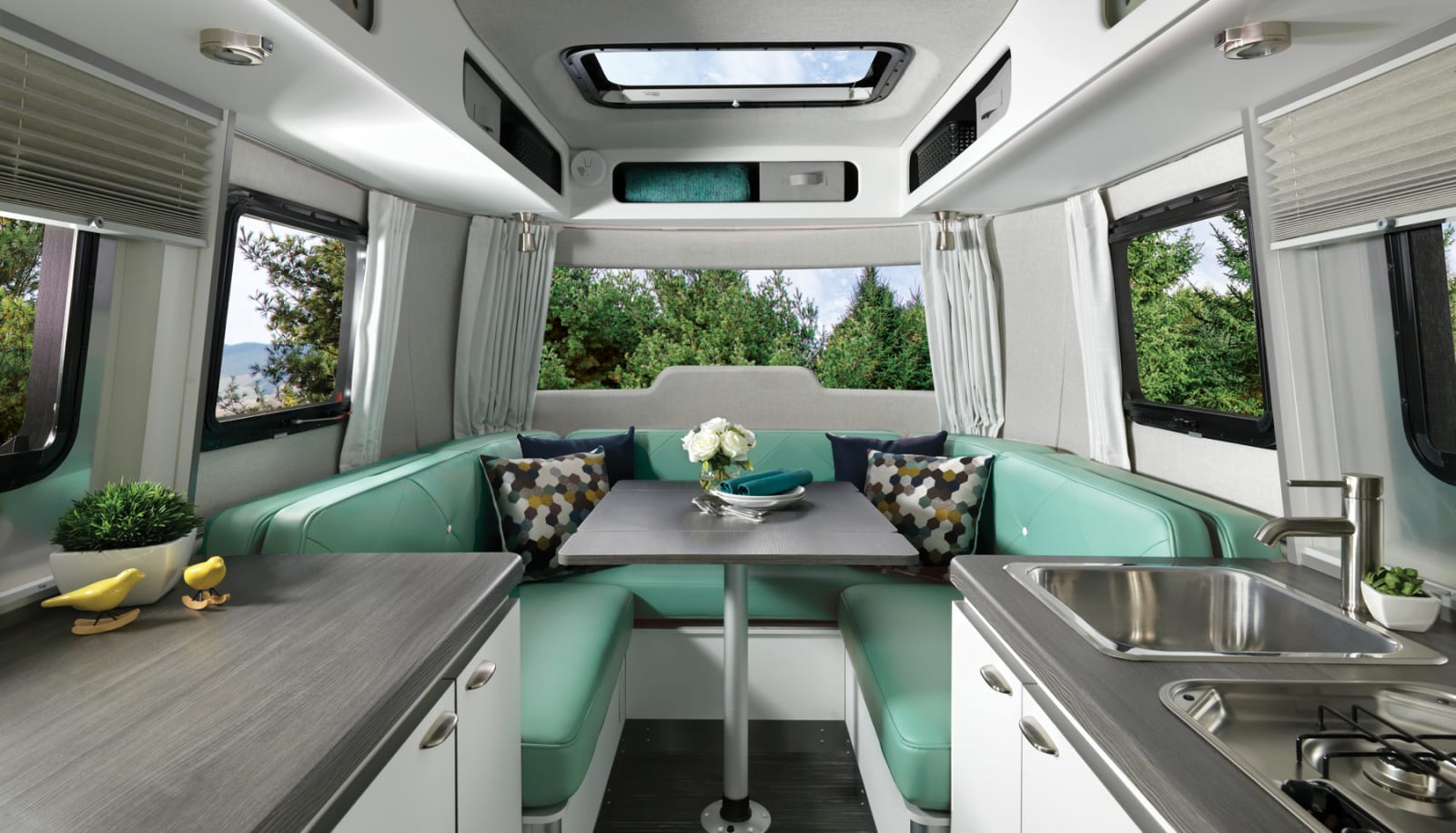 While traveling alone, I found the Nest to be a capable office, with eight USB ports and a multitude of power outlets so I could keep all the things charged and going. But even with the smart design and charming features, I do think the Nest could do with some more tech.

It has Bluetooth-controlled LED lights along the front of the trailer. You can adjust the color and set them to pulsate with music. The rest of the lights and the climate control are manually controlled. With a $46,000 price tag, a little tech here and there would have been nice. Or maybe even a sound system.

Of course, once you stand up, you're about three steps from controlling absolutely anything in the trailer, but with cars, speakers, homes and headphones getting smarter, people are just used to having great big piles of tech in everything. An Airstream should be no different.

Personally, I'm fine with the lack of "internet of things"-enabled devices. Instead of thinking about how I would launch an app to turn off a light to adjust the temperature, I thought about if I would lose any camping street cred if I brought my Xbox with me. Or that I could really use this leisure time to practice guitar. With an amp. But not too loud, I don't want to disturb the neighbors. It looks like they're watching BSG in their trailer.

The tech might not be there, but people are bringing it along with their tablets, smart speakers, streaming boxes and consoles and the Nest helps that happen.

The Nest really is a small and futuristic-looking home away from home. Airstream has produced a vessel you can tow all over the world (if there are roads) to see the endless splendid sights of wonder this planet has to offer. And at night, you can eat microwave popcorn and stream Netflix. Maybe that's all the technology we really need?

Source: Airstream
In this article: airstream, camping, column, design, engadgetoutdoors2019, gadgetry, gadgets, gear, nest, RV, trailer, trailerlife, transportation, video
All products recommended by Engadget are selected by our editorial team, independent of our parent company. Some of our stories include affiliate links. If you buy something through one of these links, we may earn an affiliate commission.