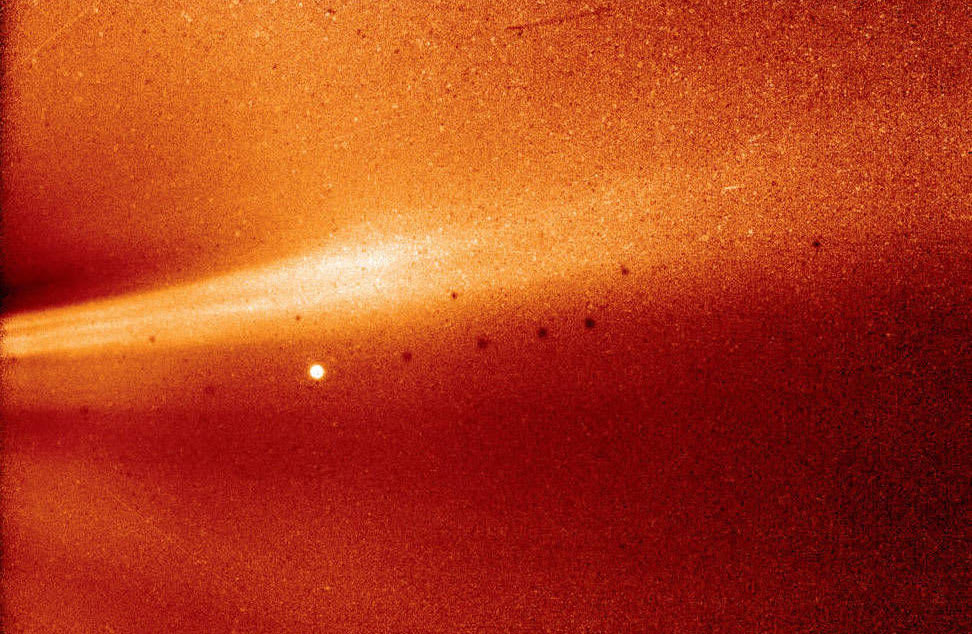 The mission of NASA's Parker Solar Probe is to help us answer some major questions we have about the sun, and to do that, it's getting closer to the sun, or any star, than a spacecraft has ever been. Between October 31st and November 11th, the probe conducted its first solar encounter, swooping to within 16.9 million miles of the sun's surface and entering its atmosphere, or the corona. And now, we have the first image from that encounter, one that NASA scientists shared at the fall meeting of the American Geophysical Union this week.

The image above was taken by the probe's WISPR (Wide-field Imager for Solar Probe) instrument on November 8th and it shows what's known as a coronal streamer. These streamers are made up of solar material within the corona and the tend to occur over regions of increased solar activity. This streamer appeared over the east limb of the sun and includes at least two visible rays. You can also see Jupiter in the background -- the bright spot towards the center.

"Heliophysicists have been waiting more than 60 years for a mission like this to be possible," Nicola Fox, director of the Heliophysics Division at NASA Headquarters, said in a statement. "The solar mysteries we want to solve are waiting in the corona."

The Parker Solar Probe will work to address three main questions: how is the sun's corona significantly hotter than the sun's visible surface, how is the solar wind that's ejected from the sun as fast as it is and how do some of the sun's particles speed away from the sun at more than half the speed of light?

Measurements from this first solar encounter only began to be transmitted back to Earth on December 7th, but scientists believe plenty of good data was collected during that run. The second solar encounter should wrap up in April 2019 and the probe's mission is currently scheduled to continue through 2025.

Via: CNET
Source: NASA
In this article: corona, gear, nasa, parkersolarprobe, research, space, sun, tomorrow
All products recommended by Engadget are selected by our editorial team, independent of our parent company. Some of our stories include affiliate links. If you buy something through one of these links, we may earn an affiliate commission.